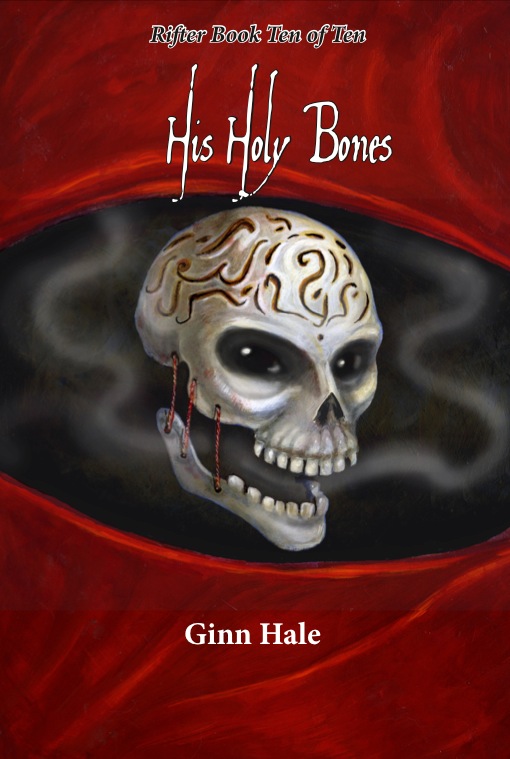 Book Ten of The Rifter

Book Ten of the Rifter

All rights reserved. No part of this publication may used or reproduced in any manner without the written permission of the publisher, except for the purpose of reviews.

Cover art, maps and all illustrations by Dawn Kimberling

This book is a work of fiction. All characters and situations depicted are fictional. Any resemblances to actual people or events are coincidental.

Huge thanks to all the great people at  Goodreads. 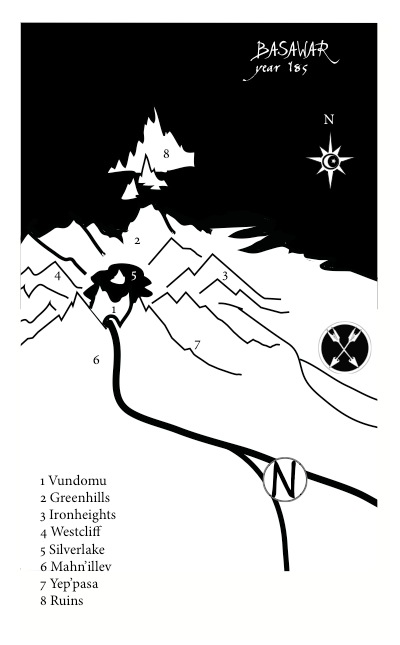 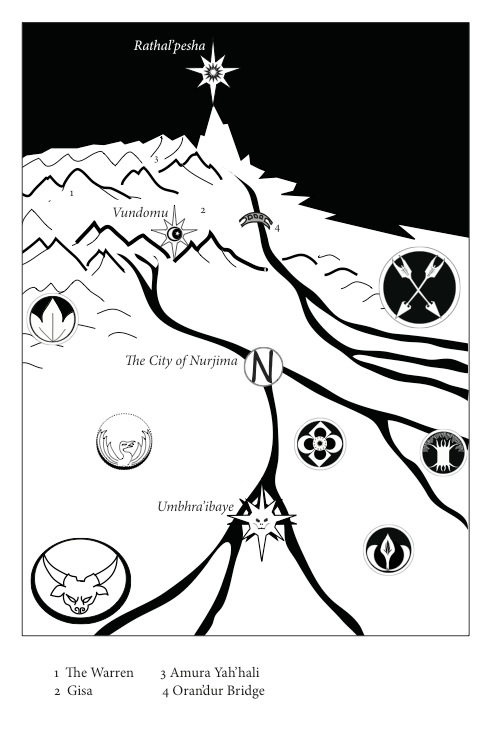 The Story So Far:

Kyle left behind his name and home when he was ordained as the Kahlil of the Payshmura Church. In the foreign world of Nayeshi, he watched over the destroyer incarnation of the god Parfir, though the young man—John Toffler—had no idea of his deadly potential.

Only once in ten years did Kyle desert his duty, leaving Nayeshi to rescue his sister, Rousma, from the burning convent of Umbhra’ibaye. After a deadly battle against the witch Ji Shir’korud, he returns with his sister only to discover that John and two of his friends have intercepted a message meant for the Kahlil alone: they’ve taken the golden key that unlocks the Rifter’s death.  Unwittingly, John and his friends have used the key and traveled to Kyle’s home world of Basawar.

Though the Great Gate is damaged, Kyle follows John in order to stop him from unleashing untold ruin on his home. However, the passage back to Basawar not only throws Kyle forward in time but leaves him badly injured and deeply changed. He neither bears the ugly red scar that once disfigured his face, nor does he possess the Prayerscars that marked him as Kahlil—instead he carries a small, red Fai’daum tattoo. But most jarringly, his memories are a jumble of contradictions.

Fortunately, Alidas, a captain of the Bousim rashan’im in the vibrant city of Nurjima, takes Kyle in. Kyle spends two years as Alidas’ secret weapon—an assassin who can walk through walls and kill with just a touch of his hand.

When Kyle is deployed to stop an assassination against the leader of the Fai’daum—a powerful sorcerer called Jath’ibaye—he uncovers a much larger plot among a small group of nobles to seize control of Basawar and breach the world of Nayeshi. While the ambitious and seductive Ourath Lisam seems to be in control, Kyle soon learns that he and his Bousim conspirators are in league with a man from Kyle’s shattered past—his nemesis, Fikiri. At the same time he discovers that Jath’ibaye is John—the Rifter. Unlike Kyle, who was thrown forward in Basawar’s history, John fell into the past and has altered the world’s history as well as events in Kyle’s early life.

Despite orders to the contrary, Kyle intervenes in the assassination attempt against Jath’ibaye. Both the Bousim heir, Nanvess, and another noble gaunan, Esh’illan, are killed in the ensuing battle. Though injured, Kyle takes possession of the mystic blade, the yasi’halaun, which Fikiri planned to feed on the Rifter’s blood and use to open a gateway to Nayeshi.

In the aftermath of the killings, Jath’ibaye evacuates his people, including Kyle, to the Fai’daum lands in the north. Misled by Ourath, the gaun’im rally their armies to avenge Nanvess and Esh’illan and march on the Fai’daum stronghold of Vundomu.

In Vundomu, Kyle is welcomed by the Fai’daum, but soon he realizes that he is not the man who some of them believe him to be—Jath’ibaye’s dead lover, Ravishan. Still, he and Jath’ibaye grow closer and Kyle takes on a student, Pesha.

With Alidas’ aid Kyle is able to stop the  guan’im attack. This allows Ji to use the yasi’halaun to devour many of the hungry bones, which Fikiri and Laurie have unleashed against the people of the north.  However, in Jath’ibaye’s absence Fikiri launches a surprise attack. Ji dies  and Pesha is just able to escape with the yasi’halaun. Enraged, Kyle battles Fikiri into the depths of the northern ruins where he kills him. But only then does he discovers that he is trapped by Laurie...

When John uses a key that belongs to his mysterious, scarred roommate, Kyle, to unlock a door in a crumbling ruin, he and two friends are transported to the world of Basawar.

There, John befriends and eventually becomes the lover of a young priest named Ravishan.  Bill and Laurie are sheltered by Lady Bousim, whose son Fikiri is also an ushiri priest like Ravishan. But as rivalries and secrets multiply John and Ravishan are soon betrayed by Fikiri and John narrowly escapes being burned alive on the Holy Road.

In the Bousim house, Bill is murdered and in her violent revenge against Bill’s killer Laurie betrays her powers as a witch. She and her unborn child are taken to Umbhra’ibaye where she will be made into one of the skeletal issusha oracles.

John and Ravishan join the Fai’daum rebels, where John hopes that he will be able to aid them in bringing down the Payshmura Church and thus free Laurie and Ravishan’s sister Rousma. And he isn’t alone in shifting his alliegance. Fikiri too soon seeks the  sanctuary of the Fai’daum and is taken in by them.

While both Fikiri and Ravishan use their powers as ushiri’im to carry messages and perform assassinations, John remains in the north. There, he begins to hone his powers and earns the name Jath’ibaye.

In desperation, John unleashes his destructive power to reach Ravishan in time to save him and the stronghold of Vundomu. Though he destroys the Payshmura and Bousim armies, he also devastates Vumdomu and arrives only to discover Ravishan dying of a mortal wound from a curse blade.

The old priest moved from cot to cot, murmuring a constant stream of Payshmura incantations. He treated the wounded kahlirash’im with herb poultices that had been mixed with John’s blood. John was vaguely aware that more injured men were being brought in. Bloody, almost inhuman shapes stretched across pallets that covered much of the floor.

He had borne the injuries of many of the wounded, but many more were beyond his aid. Over those, the old priest simply whispered last rites.

John remained kneeling beside Ravishan’s cot, watching the slow rise and fall of his breathing. John’s legs had gone numb against the stone floor. The countless cuts, burns, and bruises that mottled his body seemed to sink into one constant ache. Just below his right shoulder blade, the wound he bore for Ravishan flared and smoldered like an ember slowly burning out against his skin.

John watched Ravishan for any sign of consciousness. He breathed, but that was all. His eyes didn’t flicker beneath his eyelids. Not even the faintest expression moved over his face. The proud tension that played through Ravishan’s every motion had gone, leaving behind a beautiful muscular body that lay as inanimate as the blankets wrapped around it.

John watched Ravishan take one shallow breath after another. He felt like he had been kneeling here for days.

“Please wake up,” John whispered. “I came for you. I came all this way. Please…”

No, not even that accessible to John. A stone he could have reached into and felt its strength. With Ravishan there was nothing. John bowed his head against the cot.

“Most holy lord.” Wah’roa’s voice came from behind John.

There was a long silence.

“Call me Jath’ibaye,” John said at last. Reluctantly, he turned away from Ravishan.

Wah’roa and another kahlirash crouched on the floor, staring intently down at the stone tiles. Their uniforms were wet, muddy, and torn. The men themselves didn’t look much better. Water dripped from their braided hair, leaving pale tracks through the soot, mud, and dried blood that spattered their faces. They knelt in silence and John realized they were waiting for his acknowledgement.

“Most hol—” Wah’roa caught himself. “My lord Jath’ibaye.” He glanced up at John.

Wah’roa clearly took exception to John’s statement but then didn’t seem to know how to proceed. He lowered his gaze. “We have come to present you with what is yours and to beg your aid and benevolence.”

Wah’roa reverently lifted a bundle of black silk from his coat and laid it in front of John. A design of red crescent moons decorated the edges of the cloth. John unfolded the silk, revealing another layer of silk, this one dark red. Beneath the smooth surface of the fabric he felt something hard and rough. He pushed aside the red silk to reveal a pocked white thigh bone. A tingling, almost electric sensation played through John’s hands as he held them over the bone. He looked to Wah’roa.

“This is the bone that the yasi’halaun was to be carved from. It’s a Rifter’s bone, isn’t it?”

“It is yours, my lord Jath’ibaye. We have guarded it faithfully. And now we present it to you, so that your enemies will not have use of it.”

“Thank you,” John said. He stared at the bone. It was small and looked so fragile, and yet he could feel a presence to it. He
could feel something like the power and life he sensed in the earth and wind. Very gently, John lifted the bone from the swathes of silk. It seemed to vibrate in his hands, sending resonant waves through his muscle and bones. He could almost hear a low note ringing through him like the hum of a tuning fork. It felt sweet and pure. The bone shimmered and then melted into John’s hands, leaving them feeling warm and just a little stronger.

John remained staring at his hands for several seconds, before he realized that the kahlirash’im were still kneeling before him, waiting.

“You said that you needed my aid?” John asked Wah’roa.