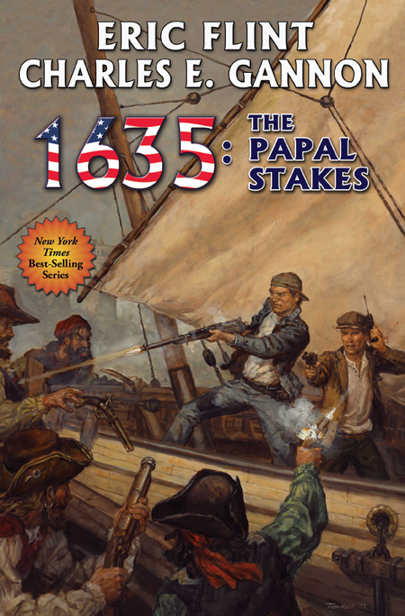 The Ring of Fire series:

1634: The Baltic War
with David Weber

1634: The Galileo Affair
with Andrew Dennis

1634: The Bavarian Crisis
with Virginia DeMarce

1635: The Cannon Law
with Andrew Dennis

1635: The Tangled Web
by Virginia DeMarce

1635: The Eastern Front
by Eric Flint

1636: The Saxon Uprising
by Eric Flint

With David Drake:
The Tyrant

An Oblique Approach
•
In the Heart of Darkness

Belisarius II: Storm at Noontide
•
The Tide of Victory

The Dance of Time
•
Belisarius III: The Flames of Sunset

The Philosophical Strangler
•
Forward the Mage
(with Richard Roach)

Crown of Slaves
•
Torch of Freedom

For a complete list of Eric Flint books and to purchase all of these titles in e-book format, please go to www.baen.com.

—The Editorial Board of the Grantville Gazette for many instances of help and acclimatization, but particularly Rick boatright and Walt Boyes.

—John R. D’Angelo of the Fordham University Library. Without his kind assistance, the Wild Geese would not have flown from history into my pages; his provision of countless references and original documents was invaluable.

—Eric Flint, who invited me to play in this wonderful sandbox of the past that never was.

—My late father, who would have been astounded to learn that his insistence on schooling me in the intricacies of Roman Catholicism and canon law would have ever borne such strange fruit.

But ultimately, I dedicate this book

—As always, to all the members of my family, who lost me for so many irreplaceable hours in this real world as I unfolded this story of a fictional one.

The line of the horizon, thin and fine

Odo, the young German operating the radio, shook his head. “I’m sorry, Ambassador Nichols, but the signal has been lost.”

Sharon Nichols, displaced ambassador to Rome for the United States of Europe, edged so far forward that her ample figure began pushing into Odo’s incongruously wiry back. “Did Colonel North confirm that he was moving to the extraction point as quickly as possible?”

Odo shook his head again. “No, Ambassador. The frequency started becoming garbled before I could send those instructions. I shall try to raise Colonel North again.”

As the young miller’s son from Rudolstadt set about this task, Sharon’s husband and de facto chief of intelligence and security, Ruy Sanchez de Casador y Ortiz, placed a hand on her arm. “My love, there is no cause for alarm.”

Sharon turned toward him, eyes bright, the smooth curves of her very dark face creased by lines of worry. “We’ve lost contact with Colonel North, who’s supposed to meet our team when it comes out of Chiavenna. A team that just happens to include my father, who told us—
promised
us—that he’d signal us by one PM today with a mission update. That update is already two hours late. So until I know that my father and my friends are with Colonel North’s forces and heading back to Grantville, every second of uncertainty is cause for alarm.” She turned back to watch Odo ply the various tricks of his arcane trade.

Ruy raised an eyebrow, but said nothing. In the last few weeks—weeks during which he and Sharon had married, fled Rome, and secreted themselves in this obscure inn near Padua—Ruy had learned that although his new wife had a fiery temperament (both in debate and in bed) she was not given to being testy. She was a large person in every regard: physiognomy, sympathy, forgiveness, and passion. There was nothing narrow about her.

So whereas her rebuff of Ruy’s reassurance might have seemed snappish to others, he knew better. He not only had intimate knowledge of Sharon, but insight accrued through three prior marriages and almost six decades of living. No, Sharon Nichols was not being testy; she was wracked by anxiety, exacerbated by the fact that she herself had agreed to send her father and friends into harm’s way.

Odo was shaking his head again. “Still no response, Dr. Nichols. And the noise around that frequency is not promising.”

“Did Colonel North say where he and his Hibernians were located?”

“They weren’t able to report their position, Ambassador. We spent most of our clear air-time trying to establish a mutually secure code.”

“What? Why?” Odo seemed to shrivel before Sharon’s growing tone and looming torso.

Ruy intervened. “Dearest, the code-checking protocols require absolute precision. If there are any missed symbols, the authentication must be deemed suspect. So with a bad signal it can take many minutes to confirm a secure transmission.”

Sharon collected herself. “Odo, when was the last time we had a precise location for Colonel North’s unit?”

“Two days ago, Ambassador Nichols. He and his men had just arrived in Silvaplana, having come down out of the Alps by way of the Julier Pass.”

“Then, if they’ve been making steady westward progress, they should be near the extraction zone now. Correct?”

Ruy saved the young radioman from his wife’s desperate glare one more time. “Near to the extraction point, perhaps. But we cannot know. They could not head toward it at best speed, my love. What if the extraction was not called for until next week? Why would two squads of mercenaries—who are known to work exclusively for you Americans—spend a week loitering about the western end of the Val Bregaglia? I doubt even so ingenuous a Spaniard as myself would believe them to simply be on an extended alpine fishing holiday.”

Sharon had to smile. But only a little. “Odo. Try again and see if you can raise my da—raise Captain Simpson’s group in Chiavenna.”

Ruy prayed that someone—anyone—in Chiavenna would respond this time. If they did, it would probably indicate that they had completed their mission in that factious open city and were ready to call for extraction.

But Odo was still struggling with the designated frequencies, all of which sounded like monsoons of static; the legendary vagaries of radio communication to and from Alpine valleys were dominating the day. “No response on any of the primary frequencies, Ambassador. Shifting to check the emergency backup frequencies.”

Ruy, seeing his wife’s breathing increase, murmured words only she could hear: “My love, you must be calm. Your staff all looks to you; if you panic, they shall surely do so, also.”

She closed her eyes. “I know, Ruy. But it’s my dad out there, and Rita, and Tom: all the up-time family and friends I have left in this—in your—world. I should never have had them stop in Chiavenna. Never.”

Ruy ran what he hoped was a soothing palm down her firm arm until he could hold her hand—low, where no one might see. Feeling his fingers, she clutched hard, almost as a frightened child might have. And in that hungry grasp—so incongruous in his strong wife—Ruy found the answer to an aspect of up-time behavior that had perplexed him for many months.

Despite the advantages in technology and knowledge enjoyed by the up-timers—the twentieth-century Americans who had become time-stranded refugees in seventeenth-century Germany—they often seemed paralyzed into inaction by fear of loss. It was not cowardice, for even the most stalwart up-timers evinced this tendency. So Ruy had been unable to conjecture a common cause for this up-time trait until, just three days ago, during a radio communiqué with his wife, Prime Minister Mike Stearns of the USE had used the phrase “risk aversive.” Ruy had understood the term’s meaning, but only now—triggered by the clutch of his wife’s hand—did its underlying emotional contexts become clear.

In the up-timers’ world—that of the rather improbable year 2000 AD that had been home to the even more improbable democratic republic of the United States of America—almost all risk had been reduced dramatically. War, shipping, mining—even flying huge rockets to the moon—had to satisfy safety requirements that were almost comical by Ruy’s standards. For people born in his time, great undertakings inevitably involved great risk. The seas routinely swallowed sailors, the mountains buried miners, and pestilences and famine took their toll upon all the children of the Earth, no matter their location or station in life. Life was a gamble, at best.