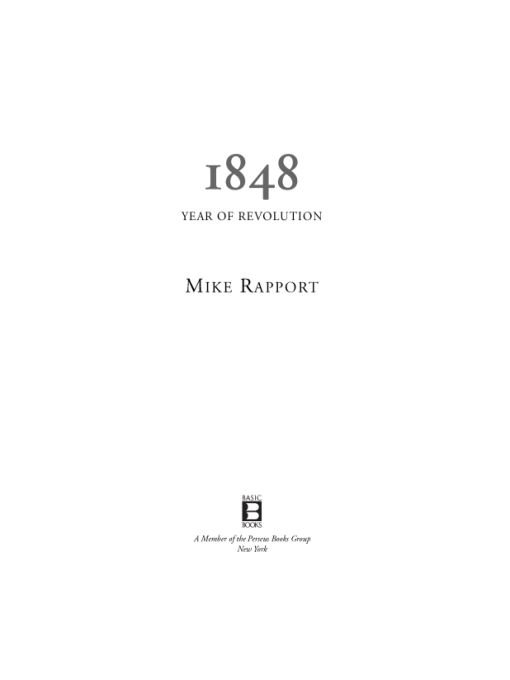 1
THE FOREST OF BAYONETS
U
nderneath a darkening January sky, a convoy of horse-drawn sledges cut trails across a glowing, snow-covered plain. The procession halted at a barrier, the passengers' passports were inspected by a sergeant and a grizzled old soldier huddling under an oilskin, his rifle slung heavily over his shoulder, raised the barrier: it was the Russian frontier with Prussia. The sledges crunched once again through the snow. Turning his head, the lead passenger, a man named Alexander Herzen, heard a Cossack wish him a happy journey, the soldier holding the bridle of his own hardy mount, its shaggy coat hanging with icicles.
1
Herzen did not know it then, but he would not see Russia again. It was January 1847 and he was embarking on a European journey, accompanied by his wife Natalie, their three children, his mother, and two nannies. He was a member of the Russian gentry but also a socialist, escaping the stifling environment of life under Tsar Nicholas I and eager to learn more about âthe West', to make comparisons with Russia and, he hoped in vain, to return with the fruits of his learning.
2
I
The Europe through which the Herzens were about to journey was a continent on the edge of an uncertain future. Politically, it was dominated by a conservative order. Of the five great powers - Austria, Prussia, Russia, France and Britain - only the last two had parliaments to temper royal power, but they were far from democratic. A parliamentary system had been evolving in Britain - albeit with bloodshed and political opposition - for generations. In 1832 had come the first great modern reform of the system, whereby urban property-owners were given the right to vote, while the cities - many of them hitherto absent or poorly represented at Westminster - were allowed to elect Members of Parliament. This was not democracy, for only one in five adult males (women were excluded as a matter of course) was enfranchised in England and Wales (and only one in eight in Scotland) and the composition of Parliament, which consisted of gentry and aristocratic landowners, remained virtually unchanged.
France had become a constitutional monarchy in 1814, when Napoleon was packed off to his genteel exile on Elba, and then again in 1815, after which the incorrigible Emperor was held under stricter conditions on the remote island of Saint Helena until his death in 1821. The Bourbon monarchy was restored, represented first by the portly Louis XVIII, younger brother of the guillotined King Louis XVI, and then, on his death in 1824, by their younger brother, the slender and ultra-conservative Charles X. The French constitution, the Charter of 1814, provided a parliament whose lower house, the Chamber of Deputies, was elected by the wealthiest 110,000 taxpayers. In 1830 Charles's royal intransigence in the face of repeated liberal electoral victories provoked the final overthrow of the Bourbon dynasty. It is said that Charles had once declared that he would rather be a hewer of wood than rule like a British monarch. It was therefore a sublime irony that, as he made his way towards exile (he would live in Holyrood Palace in Edinburgh), at one staging-post Charles's courtiers had to cut a table down to size so that everyone in the royal retinue could be accommodated in the small dining room. Back in Paris the Charter was retained by the new regime. This was the âJuly Monarchy', named for the month when the Revolution occurred, under King Louis-Philippe, the scion of the rival OrlÃ©ans dynasty. The Charter was slightly modified, so that the electorate swelled to include only 170,000 of France's richest men: this was a mere 0.5 per cent of the French population, a sixth of those who enjoyed the vote in Britain after 1832.
3
ADS
15.4Mb size Format: txt, pdf, ePub