A Long Line of Dead Men 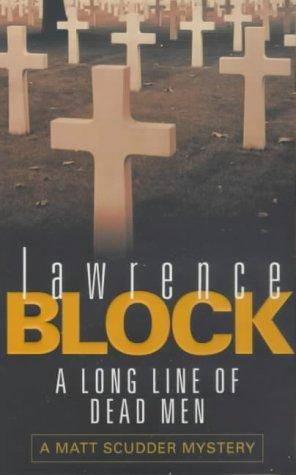 The newest Matt Scudder novel by the blessedly prolific Block is right up to his usual standards. It takes a while to set up the situation (someone in an exclusive male dinner club that meets once a year is killing off the members at an alarming rate), but once it's established, Matt gets his man by his usual patient attention to detail and sheer doggedness. He almost misses him, however (giving rise to a matchless last line), and the punishment meted out to the villain is a highly unusual variant on the kind Scudder thinks up when the law, as sometimes happens, is helpless to act. His ex-call girl companion, Elaine, is her usual comforting self, and there's a brilliant portrait of an offbeat New York lawyer, obviously modeled on William Kunstler, who specializes in representing the underdog. The scene where the lawyer and suspicious ex-cop Scudder get to know and like each other is alone worth the price of the book. Those who become impatient with Scudder's determined pursuit of AA meetings-and it's possible to do so-should note his publisher's assertion that he now has a strong following not only among mystery buffs but also in "the recovery community."
Matthew Scudder, #12

This is for Jerrold Mundis.

Lament for the Makers
Look at the mourners;
Bloody great hypocrites!
Isn't it grand, boys, to be bloody well dead?
Let's not have a sniffle
Let's have a bloody good cry!
And always remember the longer you live
The sooner you'll bloody well die!
- An Irish lullaby