Read A Scandal to Remember Online

A Scandal to Remember 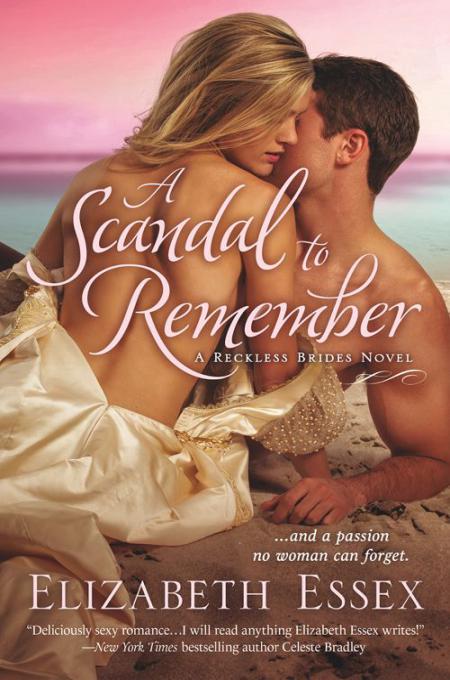 For Hannah, for her patience and brilliant assistance with plot points and character names, and for her general enthusiam for the written word, but most especially for the delightul trove of sea chanteys she spent an entire road trip singing for me. I will cherish that day forever.

May you always be able to find friends and recognize kindred spirits within the pages of a book.

Lieutenant Charles Dance was old enough and smart enough to know that some ideas were bad, right from the start. Some choices were no choice at all, especially when fueled by desperation. And some things were enough to drive a man to drink.

Except that his captain was already drunk, reeling about his cabin reeking of gin at ten o’clock in the morning. And they hadn’t even left Portsmouth dock.

The old sot of a captain blinked his rheumy eyes at Dance, and stepped curiously sideways, as if they were in high seas, and the deck were rising up to meet his foot. He squinted upward to try and focus on Dance’s rather tall person. “What are you doin’ here, man?”

Dance ducked his head to step forward under the beams overhead. He never had fit in a damn frigate. “I’ve been assigned to
Tenacious,
Captain. I’ve come to be your first lieutenant, sir.” Dance raised his voice slightly, and enunciated his words, in case the man was deaf as well as drunker than a gin whore.

Not deaf then, but most assuredly a grizzled, grumpy old drunk who showed no signs of recognition, or cognizance, much less sobriety.

Dance dug in his old blue uniform coat to produce his written orders, handed to him only that morning. The orders he had been desperate to accept, because he knew damn well he was unlikely to get another posting that seemed such an easy berth.

He had been eight months out of employment, put ashore on half-pay and close rations like most of the fleet. Eight months of watching his chances of getting a better command dwindle to nothing, while better men—men with influence and connections—were deprived of their profession as well.

Now that the navy had won the bloody war, and saved Britain from sure invasion, they were all redundant—a drain on a nation ready to forget the past and be pleased with the future. The trouble was, of course, that after so many years of war, Dance and men like him were unfit for any other gainful profession. Unfit for any other company but their own.

Which might explain why his captain was drunk and alone.

“My orders are to join you for this voyage to the South Seas, sir. An expedition of the Royal Society, is it not? Slated to leave as soon as the ship has finished being made ready?”

Dance had jumped to accept his old friend Will Jellicoe’s suggestion that he take the commission aboard
Tenacious.
Such a lengthy expedition looked to provide suitable, easy employment for several years, even without the added bonus of a monetary prize from the Duke of Fenmore for safeguarding the expedition of naturalists under the duke’s liberal patronage. One didn’t turn down a patron like the Duke of Fenmore, even if it meant signing on with a captain who looked as if he ought to have been put to bed with a cannonball years ago.

Dance might have expected that Captain Muckross be old and less than accomplished. Energetic, successful captains were unlikely to be given such an unimportant—by Admiralty standards—commission as a tame expedition of dull naturalists. But what choice did Dance have? A bad situation was better than no situation at all. He had rather take his chances with a decrepit captain, in a decrepit ship, than sit about in his decrepit lodging house wishing he were anywhere else.

The decrepit old sot of a captain was still trying in vain to focus upon the paper Dance extended toward him, but failed. Instead, he waved his new lieutenant away with an impatient, ill-coordinated sweep of his arm that nearly toppled him into a chair. “Well then, what are you gawping about here, boy? Get your bloody arse topside, and leave me in peace. Be about your damn business.”

Dance folded his orders away, and took his arse topside, where there was plenty of damn business to see to. The evidence of the captain’s mismanagement was everywhere—the ship was a hovel, about as decrepit and ill-kept as a Royal Navy frigate could be, and still be afloat. Lines were slack and rotting. Hardware and fittings were ill-used, and in bad repair. The entire vessel was filthy and stank like a stale gin mill.

In its present state,
Tenacious
was nothing better than a floating coffin.

It would take a week of work just to sort out the good from the bad, and replace the most pressing of the vessel’s rotting needs. And then there was the matter of who might pay for such repairs. Even within the Admiralty, repairs cost hard money. The yards at Portsmouth shipyard only disgorged their stores readily for captains willing and able to pay.

Dance didn’t mind spending other men’s money—the captain’s or the Duke of Fenmore it mattered not—especially if it would keep him from a watery grave. Because in its present state, the ship would see them all drowned before they reached Salvador de Bahia.

Dance ascended the ladder to the quarterdeck slowly, mentally cataloguing everything that needed to be done, and wondering why that very same work wasn’t presently
being
done. A very few men idled about, squinting at him without much curiosity, a stranger in their midst. And the quarterdeck, upon which at least one officer should have appeared on duty, was deserted.

“Who has the deck?” Dance asked no one in particular and everyone within earshot, if only to see who would answer.

Interesting. And disheartening. There was a tension, a holding back that told him
Tenacious
was a distrustful, secretive ship.

“You there.” Dance called to the only sailor he could find on the quarterdeck—a fellow lounging near the base of the mizzen mast, whittling carefully away at some piece of knifework. An idle topman from the looks of his once-bright kerchief and gold-ringed ear, with twoscore years to his tattooed hide. “Who has the deck?”

The sailor squinted up at Dance from the comfort of his carving. “No watches in port.” And then he added as a sort of afterthought, “Sir.”

“The hell you say.” Dance had never heard of such idleness. He was no martinet for strict discipline, but in all his years of being at sea, he had never been aboard a Royal Navy vessel that did not keep some sort of watch schedule, even in port. “Who has charge as the senior officer here?”

The idler had the good sense to hear the outrage in Dance’s tone, and shuffle to his feet, but the mahogany-skinned tar still looked at Dance as if he feared the new lieutenant had taken a blow to the head, though he tugged his white forelock in belated deference. “Not sure.”

Dance had always thought of himself as a patient man. He had never been the hellfire-and-brimstone sort—hellfire and brimstone always took too much energy that could be put to better use. “Let me rephrase. Who is the senior officer who is not currently drunk?”

The tar’s wrinkled face creased into a wry smile. “Not currently? Couldn’t say for sure, sir. No accounting for officers’ tastes.” And knowing he had already said too much, the man added, “Begging yer pardon, sir.”

Bloody blue fuck. This is what he had come to, amusing men who didn’t give a damn if he could have them flogged within an inch of their life. “What is your name, topman?”

“Flanaghan, sir. Topman as you say. Captain of the main.”

Irish. Which accounted for both the sunburned skin and the wry humor. But which also meant that Flanaghan was possessed of some skill as well as humor—he was a figure of authority, having been elected by the other men working his mast to lead them. A good man to have on his side.

“Flanaghan.” Dance impressed the name and the red face upon his memory, the same as he would need to do with every man jack aboard the ship. “Best to stand to something approaching attention, Flanaghan. I’m sure we’ll all be better for the exercise. Who are your officers?”

“Well.” The bronzed tar kept up his wry air. “There’s you, looks like.”

“No points for the easy fruit, Flanaghan. Lieutenant Dance. I’m assigned to be first.” Dance did not extend his hand to shake, but took the opportunity to avail himself of Flanaghan’s wry honesty. “Who was first before me?”

Flanaghan shook his head. “Haven’t had a first in all the time I been with her.”

Fuck all. The short hairs on the back of Dance’s neck stood up. He’d never heard of a navy ship without a first officer. Perhaps the captain wasn’t merely a useless drunk, but an abusive tyrant who couldn’t keep officers. “Does
Tenacious
have a sailing master?”

“Doctor they call him, on account of him having taken holy orders once upon a time in his life back in Norfolk, afore he escaped the preaching and come to sea some thirty years ago.”

A strange, gentleman’s education for a warrant officer, but Dance was happy enough to have a man of some learning in charge of the education of others—the sailing master being the instructor in navigation for any ship’s midshipmen. “Lieutenants and midshipmen?”

“No young gentlemen. Only Lieutenant Lawrence. He be young. Only passed for lieutenant at the end of our last cruise.”

“And when was
Tenacious’
s last cruise, Flanaghan?”

“We come into Portsmouth on Michaelmas, sir.”

So the ship and what might be left of her crew had been sitting idle for two months, growing barnacles on her hull since September, with no industry under a drunken captain, an elderly master, and a green boy as lieutenant.

“How many men has
Tenacious
lost since then?”

“Couldn’t rightly say, sir, as I never learnt my numbers that high.”

Another wry joke, Dance was sure, but it soured his gut all the same. This was his lot in life—the dregs from the bottom of the Admiralty’s brine-filled barrel. And likely the other remaining inmates of this floating prison were the same—too stupid or too lazy to go elsewhere.

“Pass word for the muster and punishment books to be brought to me, as well as the watch bills.” Although all of the ship’s books were under the ultimate authority of the captain, such books about the disposition of the crew—the positions and skills they held—were the responsibility of the first lieutenant. But without a first lieutenant,
Tenacious’
s books must have fallen to the sailing master. “Send the compliments of the deck that Lieutenant Dance wishes to speak to Mr. Whitely.”

The Maze Runner Series Complete Collection by James Dashner
The Painting by Schuyler, Nina
Never a Mistress, No Longer a Maid by Maureen Driscoll
Wayward Angel by K. Renee, Vivian Cummings
Death Waxed Over (Book 3 in the Candlemaking Mysteries) by Tim Myers
A Ring Through Time by Pulman, Felicity
The Last Thing You See by Emma South
The To-Do List by Mike Gayle
Jonah and the Last Great Dragon by M.E. Holley
Haunted Guest House Mystery 03-Old Haunts by E. J. Copperman