Read A Step Away from Paradise: A Tibetan Lama's Extraordinary Journey to a Land of Immortality Online

A Step Away from Paradise: A Tibetan Lama's Extraordinary Journey to a Land of Immortality (8 page)

BOOK: A Step Away from Paradise: A Tibetan Lama's Extraordinary Journey to a Land of Immortality
>>DOWNLOAD HERE >>READ ONLINE NOW
ads

‘“I’m drunk,” he said to his two disciples. “So you must help me. Last night in my dream I was visited by a
dakini
. She told me to look behind the heart of Chenresig.”

‘What the
dakini
’s cryptic instruction meant, and how to fulfill it was up to his own tulshuk nature to figure out. That was his crazy genius.

‘“Where do you think the heart of Chenresig would be?” he asked his disciples. He was referring to the Buddha of Compassion, whose statue inside the temple was on the altar on the other side of the mud and stone wall he was examining. 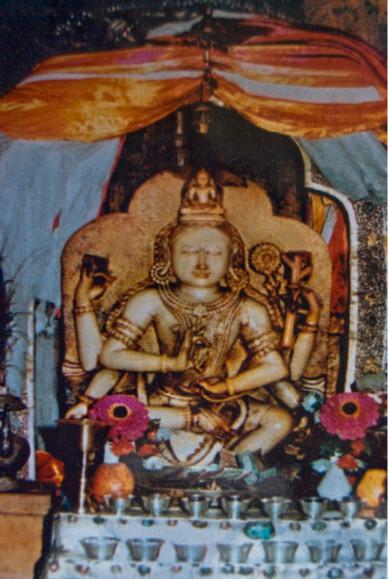 ‘“You’re both wrong,” Tulshuk Lingpa said, picking up a stone. “It would be here!” and he scratched out a circle on the dry mud wall. “Get a hammer, something we can smash the wall with!”

‘“But Master,” Sookshen gasped, “this isn’t our temple. We can’t just smash the wall.”

‘“Get me something to smash the wall with!”

‘“But Master, where can we find a hammer? It’s the middle of the night.”

‘While Sookshen was thus arguing with Tulshuk Lingpa, Namdrol knew what to do. He had been with Tulshuk Lingpa longer and knew that when a terton tells you to do something, you do it. You don’t ask questions—no matter how tangential to logic his request might appear, no matter how irrational. He went around to the front of the temple and got the thick iron rod that was used to bar shut the temple door.

‘When he returned to the back of the temple, Tulshuk Lingpa commanded him to smash the wall.

‘So he did. With one blow of tremendous force, Namdrol hit the center of the circle Tulshuk Lingpa had drawn with the stone, and a huge chunk of the wall crashed to the ground.

‘Namdrol dropped the bar with a clang, shocked at the damage his single blow had caused.

‘Sookshen looked around to make sure no one had witnessed this act of vandalism.

‘Tulshuk Lingpa looked into the hole as if he were looking not into a mud wall but into a hole in reality itself, his eyes as fierce and fearless as when he was a child and had grabbed the
purba
in the cave in Tibet. He reached into the hole and took from it a tiny rolled piece of yellowed paper. It was the size of the tip of your little finger.

‘Tulshuk Lingpa unrolled the paper and on it were a few “letters”, scratches really, of an alphabet only a terton could understand.

‘“Now I have work to do,” Tulshuk Lingpa said. “Fix the hole. You have till daybreak. No one must know what has happened here.” With that, Tulshuk Lingpa left.

‘Namdrol and Sookshen mixed some earth with water from a nearby stream to make mud, which they used to patch the hole in the temple wall. They smoothed their work, and then threw a layer of dust on it to hide its recent construction. Just as the sun was tingeing the sky with pink they fell asleep—exhausted—beside the temple, which is where villagers found them a little later as they came to do their morning
kora
of the temple.

‘My father didn’t sleep that night. The light was on in his room right past the time of the rising sun which he hardly noticed, so engrossed was he in unfolding the meaning contained in those few obscure letters of a language only he could understand. It took some days for him to fully unfold the meaning of the scratches found on that ancient and tiny scroll. When he was through, he had produced two
pechas
, or scriptures, of 300 pages each. Coming directly from Chenresig, a great and glorious heart, they told about the ending of suffering.

‘What happened to this book?’ I asked. ‘Do you have a copy?’

‘No, I don’t,’ Kunsang said. ‘The original text, in my father’s own hand, was hastily written. So he gave Namdrol the first book for him to make a copy by hand lettering it in proper Tibetan. Namdrol copied it and when he gave it back, my father gave him the second to copy. When—after a month or two—Namdrol hadn’t finished copying the second book, I remember that my father became angry.

‘Though I was only a boy at that time, I was curious. I went to where Namdrol was living, and he was sitting there—cross-legged on a cushion with a low table before him, copying the text. I asked him in all innocence what it was that he was copying. “I’m not supposed to tell anyone,” he said, “but since you’re the master’s son, I can tell you. It is a very important
ter
that your father found,” and then he told me the whole story I just told you, of the
ter
in the temple wall.

‘What he didn’t tell me was why he was taking so long to copy the second book and get it back to my father, though the truth finally did come out. After he had begun copying the second book, he had been approached by some Khampa lamas who were living in Dharamsala and had money in their pockets. They were after some of my father’s
ter
. They said to Namdrol, “Tulshuk Lingpa has spent so much time here, he must have taken out some
ter
. Tell us about the
ter
he has taken out.”

‘Namdrol said, “I heard he took out some
ter
in Tibet but I don’t know; I wasn’t there.”

‘“Come on,” they said. “Tulshuk Lingpa is such a high terton; he must have taken out
ter
here. Show us what you’ve got!”

‘Only when they made it clear that their request was backed by money did Namdrol tell them about the
ter
he took out from the temple wall. But he said he couldn’t show them.

‘They pleaded with him. “Come on! Namdrol, please …” they said. But he was not so easily persuaded to betray his teacher and his secret text. It was only when they offered him 35,000 rupees—a fortune at that time—that Namdrol’s resistance crumbled. He agreed not only to show them the Chenresig
ter
but to make them a copy. It was because he was secretly making this second copy that he was taking so long to get my father’s copy back to him. After he gave my father his copy, along with the original, he tried to get the first volume back but my father refused. The Khampa lamas never got that first volume.’

‘What happened to the copies that Namdrol gave to Tulshuk Lingpa?’

‘They’re now at his monastery in Lahaul,’ Kunsang said.

‘And the originals, in Tulshuk Lingpa’s own hand?’

‘The originals were stuffed into a statue of Chenresig and placed into a stupa, or reliquary memorial, where they are to this day—high in the stone and snow mountains of Lahaul.’

The phone rang; Kunsang picked it up and began to speak with a relative of his wife’s in Sikkim. This gave me some time to think of his story. When he hung up the phone and placed the needlework doily back on it, I asked him a question I knew was rather delicate but I had to ask. I was careful to pose the question in such a way so as not to imply doubt on my part.

‘The
ter
your father found in the temple wall was hidden by Padmasambhava in the eighth century, right?’

‘Surely the monastery in Triloknath is old,’ I ventured, ‘but it isn’t
that
old. It took some time for Buddhism to spread to such outlying areas as Lahaul. I know that readers of this book, especially Western readers, will ask how
ter
hidden by Padmasambhava in the eighth century could be hidden in the wall of a monastery that was built much later, long after Padmasambhava had died.’

‘The monastery in Triloknath is
extremely
old,’ he said, suddenly—and for the first time since I knew him—serious. He eyed me cautiously, as if maybe I were no longer to be trusted.

By the tone of his voice and the look on his face I could tell he saw my point and wasn’t completely satisfied with his own answer. The hypothetical Western readers needed what he didn’t: an external measure of truth, one that could stand the test of doubt.

‘There are 108
tertons
,’ Kunsang said curtly. ‘They all have the same powers as Padmasambhava. One of them must have put it there.’

As if to at once put an end to that discussion and to proclaim the supremacy of madness, Kunsang jumped from his bed, lay on the floor and cracked his knuckle on his head with such force that it resounded like a coconut.

Each time I arrived at Kunsang’s with my tape recorder, pen and paper he would get an impish smile, burst out laughing, and say, ‘And
then
what happened?’ But his question was clearly rhetorical. It was obvious he had been thinking of what story to tell me next. His stories weren’t often linear but there was an internal, often logic-defying thread that strung the incidents of any given story together and wove the stories themselves together into a coherent whole. Since the stories of Tulshuk Lingpa’s life all culminated in his setting forth for the Land of Immortality, every incident seemed designed to loosen the rational mind from its moorings.

Kunsang explained that with time, Tulshuk Lingpa’s role was not just as head lama of Pangi. Not only would people go to him if they needed advice or to know their future, or if they were sick, possessed by spirits, needed a name for a child, or to learn painting and writing. People from one end of the valley to the other would come to him also to settle disputes. They would present their cases before him and ask for justice. He was the man with the best connection to the secret hidden lands of spirit and mystery from which magic and divine guidance came. Since his judgments had the authority of an oracle, his decisions were beyond dispute.

One day, Tulshuk Lingpa was called upon to switch roles when a man came riding into the village on a fast steed from Klaath, a village further down the valley where the Chenab River falls through a series of gorges to Kashmir and it becomes even more rugged and lonely.

‘The Muslims have invaded,’ he declared as he jumped from his horse. ‘They have come over the Such Pass. We must mount an army, go up the valley to Klaath and beat the Muslims back. If we don’t stop them, Pangi will be next. We need at least one man from each household.’ He told this to some villagers, and together with them he came to Tulshuk Lingpa.

Avenues other than open warfare are available to
lingpas
when it comes to overcoming foes. The Nyingma lineage (the oldest in Tibetan Buddhism) to which Tulshuk Lingpa belonged centered more on Padmasambhava than on the Buddha, whose teachings Padmasambhava brought to Tibet. Padmasambhava was a wizard and a sorcerer. He didn’t go to Tibet to convert the people, using missionaries, trinkets, guns, crosses, scriptures, ideas or threats of eternal hell.

Once Upon a Highland Summer by Lecia Cornwall
Gith by Else, Chris
Eye of the Forest by P. B. Kerr
The Doctor Is Sick by Anthony Burgess
Forest of Ruin by Kelley Armstrong
The Pack by Dayna Lorentz
Pop Kids by Havok, Davey
The Savakis Merger by Annie West
Sensible Life by Mary Wesley
Highland Tigress (Tiger Series) by Anderson, Amanda