Read A Sunday at the Pool in Kigali Online

A Sunday at the Pool in Kigali 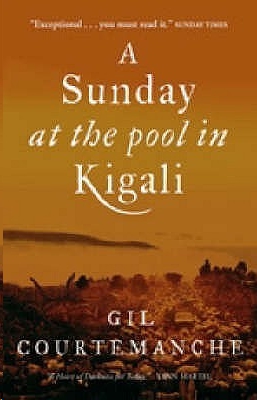 Nominated for the Governor General’s Literary Award for Translation

“
A Sunday at the Pool in Kigali
is a
Heart of Darkness
for today, with a meaner edge, the moral lines more blurred. I don’t know what reader will read this book without feeling in some way morally tested.”

“
A Sunday at the Pool in Kigali
is in part a novel about futility. It suggests that when the worst of which humanity is capable is unleashed, as in Rwanda, good is powerless to stand in its way. But it is also an essay in anger. Gil Courtemanche’s fury lights up the book: his fury at how the reverberations of the massacre, which sounded as thunder in Rwanda, barely stirred the moral air in the West until it was too late; his fury at the Western newscasters who sanitized and downplayed what was happening; his fury at the Western public and governments, for their repeated refusals to see Africa as any of their business; and above all his fury at the United Nations, with its hand-wringing and its utter failure to intervene… . Courtemanche’s exceptional book reminds us how a novel can involve the reader imaginatively and morally in ways a work of history or journalism never could. By mixing the documentary and the fictional, Courtemanche has managed to make the massacre visceral, messy and traumatically emotional again.”

“The dedication page mentions ‘friends swept away in the maelstrom’ and with this nasty, hopeful, bilious, and affirming book, Courtemanche has done them justice. The journalist in him has, thankfully, emptied himself, heart and all, into a love story full of real people that demand to be remembered.”

“
A Sunday at the Pool in Kigali
is a blunt, vividly visual account of a human cataclysm that has left a scar on the psyche of us all. At the same time it is a testament to love, its durability and frailty in the face of annihilation. Do not expect it to leave you untouched.”

“I would like to salute once more
A Sunday at the Pool in
Kigali,
the extraordinary first novel by Gil Courtemanche on the subject of the horror of the Rwandan genocide. In my humble opinion, this fresco with humanist accents, which could easily find a place next to the works of Albert Camus and Graham Greene, is the novel of the year.”

“This extraordinary novel deserves a wider audience—not just for what it has to say about a recent holocaust that has been callously, if not criminally, overlooked, but also for what it says about the worst and, occasionally, the best, human beings are capable of… . Valcourt is the kind of unheroic hero Graham Greene might have created… . By turns angry and elegiac, Courtemanche’s novel is a damning document, an accusation aimed at a world that was and, to a large extent, remains oblivious to one of history’s worst crimes.”

“An astonishing first novel… [Courtemanche’s] time in Rwanda, where he worked as a journalist, may have produced the first great novel of the catastrophe that befell that country.” 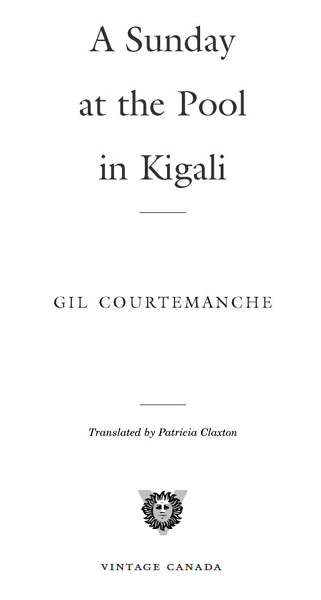 All rights reserved under International and Pan-American Copyright Conventions. No part of this book may be reproduced in any form or by any electronic or mechanical means, including information storage and retrieval systems, without permission in writing from the publisher, except by a reviewer, who may quote brief passages in a review.

Vintage Canada with colophon is a registered trademark.

Page 259 constitutes a continuation of the copyright page.

To my Rwandan friends swept away in the maelstrom

Finally, to Gentille, who served me eggs and beer and
could be dead or alive, if only I knew

I have tried to speak for you

I hope I have not failed you

I have had the pleasure and privilege of working closely with Gil Courtemanche, following the original publication in French of
Un dimanche à la piscine à Kigali.

In response to suggestions that readers might appreciate knowing more about the background of Rwandan politics, I have provided a few additional footnotes and now and then added a clarifying word or two to the body of the book, hoping to give a maximum of information with a minimum of disruption to the story. Some of this material was provided by the author.

The translation of all quotations of poetry by Paul Éluard and of a sentence by Albert Camus is mine. Bibliographical references for the original excerpts will be found at the back of the book.

I would like to thank a number of people for their assistance with background and terminological information in their fields of expertise: Nouella Grimes, Antonino Mazza, Roger Titman, Eleanor Maclean of the Blacker-Wood Library of Biology at McGill University, Line Provost of La Clinique médicale l’Actuel in Montreal, Dr. Anne-Louise Lafontaine, Dr. David Claxton. Thank you to Gil Courtemanche for his cooperation and his confidence in me. Thank you also to Louise Dennys, Noelle Zitzer and Doris Cowan for their careful, courteous editing, and to our Australian publisher, Michael Heyward, for some astute and timely observations.

This novel is fiction. But it is also a chronicle and eyewitness report. The characters all existed in reality, and in almost every case I have used their real names. The novelist has given them lives, acts and words that summarize or symbolize what the journalist observed while in their company. If I have taken the liberty of inventing a little, I have done so the better to convey the human quality of the murdered men and women. Those who planned and carried out the genocide are identified in this book by their true names. Some readers may attribute certain scenes of violence and cruelty to an overactive imagination. They will be sadly mistaken. For proof, they have only to read the seven hundred pages of eyewitness reports gathered by the African Rights organization and published under the title
Rwanda: Death, Despair and Defiance
(African Rights, London, 1995).

Finally, I would like to thank Patricia Claxton for the wonderful job she has done in translating my book into English, and for the skill and great care she brought to the task. As a result of our discussions, we made a few useful modifications and I took her counsel and the opportunity she offered to clarify some additional points. A good translation improves a text, and I feel that is certainly true in this case.

In the middle of Kigali there is a swimming pool surrounded by deckchairs and a score of tables all made of white plastic. And forming a huge L overhanging this patch of blue stands the Hôtel des Mille-Collines, with its habitual clientele of international experts and aid workers, middle-class Rwandans, screwed-up or melancholy expatriates of various origins, and prostitutes. All around the pool and hotel in lascivious disorder lies the part of the city that matters, that makes the decisions, that steals, kills, and lives very nicely, thank you. The French Cultural Centre, the UNICEF offices, the Ministry of Information, the embassies, the president’s palace (recognizable by the tanks on guard), the crafts shops popular with departing visitors where one can unload surplus black market currency, the radio station, the World Bank offices, the archbishop’s palace. Encircling this artificial paradise are the obligatory symbols of decolonization: Constitution Square, Development Avenue, Boulevard of the Republic, Justice Avenue, and an ugly, modern cathedral. Farther down, almost in the underbelly of the city, stands the red brick mass of the Church of the Holy Family, disgorging the poor in their Sunday best into crooked mud lanes bordered by houses made of the same clay. Small red houses—just far enough away from the swimming pool not to offend the nostrils of the important—filled with shouting, happy children, with men and women dying of AIDS and malaria, thousands of small households that know nothing of the pool around which others plan their lives and, more importantly, their predictable deaths.

Jackdaws as big as eagles and as numerous as house sparrows caw all around the hotel gardens. They circle in the sky, waiting, like the humans they’re observing, for the cocktail hour. Now is when the beers arrive, while the ravens are alighting on the tall eucalyptus trees around the pool. When the ravens have settled, the buzzards appear and take possession of the topmost branches. Woe betide the lowly jackdaw that fails to respect the hierarchy. Birds behave like humans here.

Precisely as the buzzards are establishing their positions around the pool, precisely then, the French paratroopers on the plastic deckchairs begin putting on Rambo airs. They sniff all the feminine flesh splashing around in the heavily chlorinated water of the pool. Its freshness matters little. There is vulture in these soldiers with their shaven heads, watching and waiting beside a pool that is the centrepiece of a meat stall where the reddest, most lovingly garnished morsels are displayed alongside the flabby and scrawny feminine fare whose only diversion is this waterhole. On Sundays, as on every other day of the week at around five o’clock, a number of carcasses—some plump, some skeletal— disturb the surface of the pool, well aware that the “paras,” as the paratroopers are known, are not the least daunted either by cellulite or by skin clinging to bones merely from habit. The women, if they knew what danger stalked them, would drown in anticipation of ecstasy or else get themselves to a nunnery.

This tranquil Sunday, a former minister of justice is warming up energetically on the diving board. He does not realize that his strenuous exercises are eliciting giggles from the two prostitutes from whom he is expecting a sign of recognition or interest before diving into the water. He wants to beguile because he doesn’t want to pay. He hits the water like a disjointed clown. The girls laugh. The paras too.