Read A Tale of the Other Kind: A Therian Novel Online

A Tale of the Other Kind: A Therian Novel 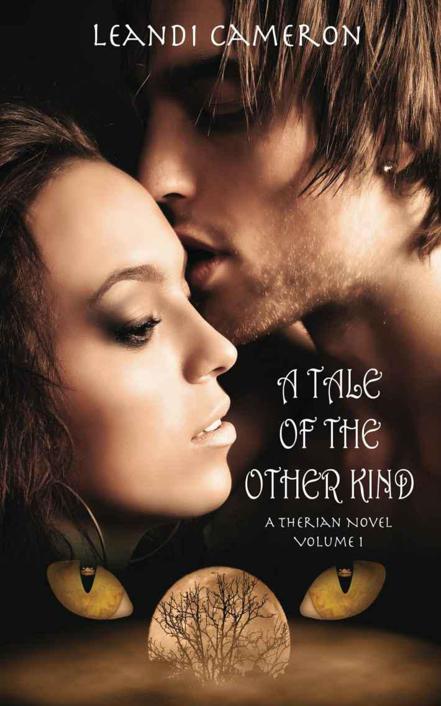 Published in 2012 by House of LeaVik - Writing, Publishing & Design Division.

All rights reserved. Apart from any use permitted under the RSA and international copyright law, this publication may only be reproduced, stored or transmitted, in any form, or by any means with prior permission in writing from the publishers or in the case of reprographic production in accordance with the terms of licenses issued by the Copyright Licensing Agency and may not be otherwise circulated in any form of binding or cover other than that in which it is published and without a similar condition being imposed on the subsequent purchaser.

To dad, my musical angel staring down at me from heaven, and to all the other angels on earth that have helped me make this book a reality. Thank you for your love and support.

Leandi Cameron is a South African journalist. She studied Social Sciences, Journalism, at Technikon Pretoria, and has won multiple journalistic awards. She currently resides in Johannesburg, South Africa, with her husband and two Chihuahua children. As co-owner of House of LeaVik, she also dabbles in fashion, publishing and graphic design.

Winter was always Kai's favourite time of the year; however, on this particular morning, he had no desire to get up as early as he normally did. He pulled the thick thermal blanket tightly around his neck as a cold shiver ran down his exposed arms.

He was running a temperature, sweat was trickling down his forehead, and his bones felt as if they were being torn from his insides. The temperature dropped to a chilling low during the night and a gust of wind blew the shutters open, killing the last flicker of flame in the fireplace. All he could think of was Sienna, and how his behaviour had gotten the better of him the day before.

He frowned as the events unfolded in his waking mind, and the thought of Sienna's horrified face made him feel sick to his stomach. A sinking feeling consumed his chest as he realised that he had to get up and face her. But now, on top of all that had happened, he had come down with the flu as well. The red alarm clock on the oak bedside table started ringing. He tried to push the screeching sound out of his mind by pulling the bed covers over his head. His chest felt suffocating and tight as if heavy block of steel was forcing him down into his pillow. A smell of fried bacon filled the room, and the aroma of brewing coffee tickled his nose from under the blanket, tempting him to leave the comfort of his bed.

He breathed a deep-throated sigh and pulled away the blanket, lifting his arms out from the warmth that was begging him to stay. Eventually, after considering the idea of whether to stay in and sleep off his rising body temperature and throbbing pain that was pulsing through his body, he realised that he had to gather his courage and get up to face the day. Slowly, he flung his bare muscular legs over the side of the bed; a soft moan escaped his throat as pain radiated through his calves.

He switched off the beeping alarm clock while drowsily sliding across the room towards the bathroom he shared with his mother on the second floor of the house. He got into the shower, trying to drown the overwhelming feelings of guilt and confusion that were plaguing his thoughts. He felt lightheaded, an aftermath of the fury and anger sparked by seeing James hurting Sienna the day before. He could still remember the menacing look in James’s face and the anger he poured out over Sienna who was defenceless to his attacks. She was kind – too kind for someone like James who ran with the wrong kind of crowds. Kai knew that she was getting in over her head when he first saw her moving towards a relationship with James, but he was powerless.

She was just too trusting and, perhaps, a little naïve in thinking that she could tame a beast of his kind. Kai sighed as the warm water trickled slowly out of the showerhead through the frozen pipes, but soon a smooth stream of water catapulted from the hose, making the unbearable cold weather somewhat tolerable. Kai stood silently underneath the water as it washed over his face and shivering body. Steam slowly filled the small bathroom, keeping the warmth created by the water locked inside while he wrapped a large white bath towel around his waist. He leaned over the basin to wipe away the vapour built up on the mirror with the palm of his hand.

He barely recognised himself as he squinted to see through his bruised eye. Wincing, he touched the cut on his cheek that was already beginning to heal. Carefully, he dabbed antibacterial cream on the wound before brushing his teeth. He grabbed two painkillers and flung them down his throat with a glass of water. A sharp pain shot through his joints as he dressed. He leaned back against the closet door when the room started spinning; his eyes unable to focus. He slowly found his feet as the dizzy-spell evaporated, and he tried to gain his composure by breathing deeply. On his way out of the house he hoped his mother wouldn’t notice him, but his luck was turned against him.

‘Kai, where are you going?’ she called to him from the kitchen when he opened the front door.

‘Ma, I’m late for school,’ he said, without turning around.

‘Rubbish, you have plenty of time. You can’t go to school without breakfast.’

With a grunt, he turned around and headed back towards the kitchen. Bethany Emery greeted him with a glowing smile, which quickly turned into a questioning frown.

‘What happened?’ she asked concerned over her shoulder as she walked towards the washbasin, placing dirty dishes in the soapy water. Her eyes grew at the sight of his bruises.

Bethany was neatly dressed in the all-black ensemble that she usually wore for work at the fashion boutique she managed. She dipped her hands into the luke-warm, foamy water, but distractedly started scrubbing at the dirty pots and pans from the previous night’s supper.

Kai shook his head, ‘Nothing.’

‘Did you get into a fight?’ she questioned, concerned.

‘You could say that,’ he replied, pulling his lips into a thin line.

Her eyes narrowed. ‘This is not like you Kai. What happened?’

‘Don’t worry about it; it’s nothing I can’t handle.’

‘Do I need to call a parent?’ She asked, worried before turning her focus on his scars, ‘Did you put something on that cut? It might need stitches.’

‘Please ma, stop fussing. I’m fine. Like I said, you don’t have to worry.’

With a sigh she looked at him for a long second, ‘You didn’t eat last night,’ she said, ‘I’ll put your food in the fridge if you want to eat it for lunch after school.’ She blew at a lock of blonde hair that fell into her face.

‘Thanks mom,’ he forced a smile back at her and took a seat at the wooden kitchen table. Toast and on assortment of jams were sprawled across the surface of the table, with boiled eggs and the bacon placed neatly in a plate for his breakfast.

‘Damn, but it’s cold this morning. I mean, winter gets cold, but my toes feel like they’re about to fall off,' he said, rubbing his cold hands together.

'It’s snowing honey,' Bethany smiled. She still had a questioning look on her face as she dried her hands on a towel and walked across the room towards the kitchen table. She leaned across the table and pulled at the blinds that were shielding the outside world from their cosy cabin, revealing a blanket of white snow covering the tree tops and the now, unrecognisable landscape surrounding their house.

He flinched as the bright winter sun stung his eyes. He gasped slightly, ‘Wow! It’s amazing. Unusual, but so beautiful.'

‘The Drakensberg snows must be moving further north this year,’ she replied, still looking at him curiously. She gave him a once over. ‘Are you running a fever?' she asked, placing a hand on his forehead, and wiping away a small drop of sweat.

‘It’s nothing; I have a headache.’

'I see,’ she replied, unconvinced at his bravery. ‘At least try and get some food in your stomach,’ she gestured towards his untouched plate of food.  She sat down at the chair opposite Kai and started nibbling at a piece of toast while opening a copy of the Lowvelder newspaper.

‘Looking for extra work again?’ he asked as he noticed her scanning the classifieds. She lifted her head and smiled at him, ignoring his question. She placed the newspaper on the table beside her and took a sip of her tea.

‘You know I’m old enough to help you with all this stuff. I could get another job.’

‘If I need your help, I will ask; promise. Besides, my job at the boutique is getting us by just fine.’

‘I’m just checking.’ Bethany smiled at him. ‘You sometimes remind me so much of your father - always worried.

‘Yeah, you always say that. It’s a pity that he left, maybe I would have gotten to know him a little better,’ he sighed, with a slight hint of sarcasm.

‘Sorry I missed your rugby game last night. Stocktaking took much longer than I anticipated,’ she said with a guilty smile.

‘It doesn’t matter; rugby hasn’t been going too well this year anyway. You really didn’t miss a thing,’ he lied, again. How could he tell her how badly things had turned out after the rugby game where he’d discovered James hurting Sienna, and his odd experience at how he found them? A moment of silence passed between them until the wild clanging of tea being stirred filled the air.

‘Are you sure you’re okay?' Bethany asked looking at him worried.