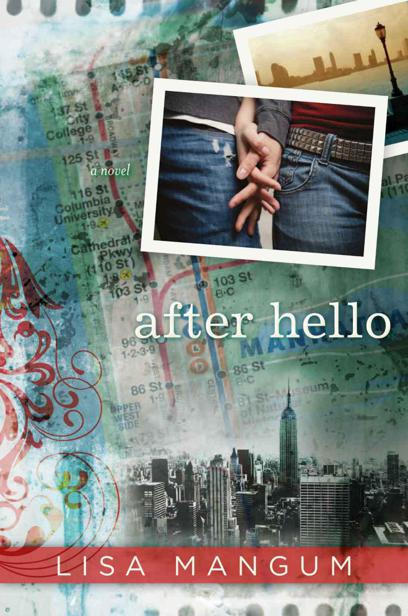 I shouldn’t have noticed him. I wasn’t even looking in his direction at first. I was dazzled by the sunlight reflecting off the glass buildings that lined the busy sidewalks of New York. It was only when I turned away that I saw him—though, to be fair, it wasn’t him I noticed first. It was his zip-up gray fleece hoodie with the black stripe that ran down the sleeve and around the collar and the faded, fuzzy letters that said
Zebra Stripes
across his chest.

I didn’t think anyone but me listened to their music, let alone spent money on swag.

The bookstore door stayed open behind him, though a small bell still rang when he stepped outside into the spring sunshine. He tucked a book wrapped in brown paper into the military green messenger bag hanging at his side, then shoved his hands into the pockets of his jeans. A rolling cart of bargain books hid most of his body, the tops of the titles hitting him hip-high. Tall, then. And lean.

Say what you want, but I’m a photographer so I get paid to notice details like that. Well, not yet.
Amateur
photographers don’t get paid, but the pros do, and someday I’m going pro.

He stepped back, letting an older woman walking a dog pass by, then fell into step behind her and headed into the crowd.

Almost on instinct, I powered up my point-and-shoot camera and snapped off a picture before he disappeared. I reviewed it on the screen, zooming in as much as I could on the small image, hoping to see more of his face. No luck. I’d missed his face, capturing only a shoulder, a sliver of his back, his leg extended mid-stride. Still, there was something interesting about the picture. Something that spoke of movement and purpose. And isolation. I thought he looked oddly solitary even as the crowd had pushed in around him.

I’d heard stories about the crowds of New York, and so far they were all true. Given that it was lunchtime, there were probably even more people out than usual, but since this was my first day here, it was hard to know for sure. After I’d been jostled and bumped and pushed one time too many, I finally pressed my back against the brick wall of the building behind me, feeling small and trying to stay out of the way.

Thinking about lunch made my stomach rumble. Dad had promised to meet me here at 11:30 sharp for our first big date in the Big Apple, but he was already late—almost a half hour late. I sighed, wondering why I was surprised. He had warned me at breakfast that his meeting might run long, but still, we only had the one day to spend in New York and I didn’t want to spend it alone.

Dad was the only family I had. It had been just the two of us for a long time now. In the beginning, Mom had been part of the family dream, but when I was eight, she must have decided she wanted to be part of someone else’s dream, someone else’s family. And just like that—she was gone.

My cell phone sounded from where it was buried deep in my shoulder bag. The marimba music of an incoming call interrupted my thoughts. Keeping my eyes focused on where the Zebra Stripes boy had disappeared, I fished out my phone. The cars and buses and trucks sped past me like film flickering through an old-fashioned camera. They were just flashes of metal, of color. Blue. Black. Silver. Red. I felt the energy pulse around me like a living thing. I closed my eyes, and the sound transformed from traffic to ocean inside my ear.

“Sara?” My dad’s voice echoed through my phone, sounding thin and metallic. Speakerphone. I hated that. Couldn’t he just pick up the phone and talk to me? I opened my eyes, and the fleeting moment of inside stillness slipped away like a speeding car. Or like a boy with a book under his arm.

“Hey, Dad,” I said. I wondered who was listening in on the other end. Probably his new boss and a room full of company men in suits and ties. The thought made me claustrophobic. I’d much rather be outside than inside on a day like this. The weather was all blue skies and sunshine, and the city was alive around me. I felt the urge to move, to tap into the energy of the day and just
go.
Somewhere—anywhere.

“Is everything okay?” I asked. The whole reason we were in New York was so Dad could finalize the sale of his company. Not only would the sale bring in a nice chunk of change for us, but it meant that Dad would be able to cut back on his hours. He’d been working eighty-hour weeks for a long time, building up his SEO company—FindersKeepers.com—into something a bigger company like SearchEngineDrivers.com would find attractive enough to acquire.

“Yes, everything’s fine. It’s just that the paperwork is taking a little longer than we planned.” Dad hesitated. “Listen, Sara-bear, I’m sorry I’m not there yet, but I don’t think I’ll be able to get away for lunch this afternoon.”

His words dropped on my heart like a lead weight.
So much for our perfect day.
I knew this meeting was important, but I had really hoped that it wouldn’t take all day.

I concentrated on the phone and heard the sound of papers rustling against each other, the clink of a glass hitting the tabletop. A door closed—or opened; I couldn’t quite tell. A muttering of voices ebbed and flowed, lost in the sounds of a wailing siren that roared wildly in my other ear.

“Yeah.” I let the moment stretch out. I heard Dad inhale, prepare to speak. I rushed to fill the void. “It’s okay. I don’t mind. I’ll find something.”

This time it was Dad’s turn to pause. “Are you sure?” He didn’t wait for me to answer. “We’re still on for dinner—promise. And I haven’t forgotten that you wanted to go to the top of the Empire State Building. We’ll do that, too. Double promise. It’s just that right now—”

“It’s okay, Dad,” I interrupted. “Seriously. I know you’re busy. Your meeting is more important than lunch.”
More important than me.
I didn’t have to say it; we both heard it anyway. I looked down the street, clogged with people. “And if I can’t find a place to eat in this town on a Saturday, then I deserve to starve.”

“Dad.” The single syllable was enough to kill the rest of his sentence. He knew that tone. The one that said,
Pay attention because I’m only going to say this once.
The one that warned,
Don’t push it.
The one that I learned from my mom.

“Okay,” he acquiesced. Because he knew I wanted him to.

“I’ll call you later,” I promised. Because I knew he wanted me to.

“Have fun.” It was almost a question, but I chose to hear it as a directive.

“I will,” I said. I hung up without saying good-bye. I never said it. Not if I could help it. Good-bye was final. Painful. It was the sound of a door closing. Of footsteps walking away.

It was the last thing my mother had ever said to me.

I shook off the bitter thought. I wasn’t going to let her invade my day. Not today. Not this day.

This day was for breathing deep and looking ahead. So I did just that, gulping down a lungful of hot, sweet air until it filled my entire body. I tasted the metallic tang of exhaust, listened to the rumble and thrum of throngs of people moving around me, and drank in the sight of green leaves scattered on the trees hidden between the buildings.

Freedom. That was what I felt standing there on the corner with a park on one side of me and a cluster of shops on the other, the small bookstore with its open door and rolling carts of books beckoning me from across the street. The freedom to go wherever I wanted, do whatever I wanted. I was a single person in a city of millions and the one person who wanted to keep tabs on me had just told me to go to lunch without him.

I absently pushed the power button on my camera, listening to the smooth hum of the lens as it woke and stretched before settling into its standard halfway position. I glanced down at the last picture I’d taken. The one of the boy in the gray hoodie with the gray-green messenger bag. I lifted the camera, lining up my surroundings until they matched the image on the LCD screen. It was like looking into a portal of a moment that had been snatched out of time. The mysterious boy was the only difference. Here, then gone.

I snapped another picture, just to hear the reassuring click of capture, and then looped my camera around my wrist.

Glancing over my shoulder at the steady stream of traffic flowing around me, I headed off into the unknown, trailing the fading footsteps of the boy I’d glimpsed only briefly through my camera eye.

Someone was following him. It was a crazy idea; there were always people walking along the narrow sidewalk, so it was impossible to believe there could be just one person intent on following him, but he knew it as surely as he knew the exact contents of his messenger bag. When he glanced over his shoulder, his eyes found her immediately. Yep, that was her. The girl with the camera.

He’d noticed her the instant he’d left the bookstore. Maybe no one else would have paid her any mind, but there was something about the way she leaned up against the building—a black band of sunglasses resting across the top of her head, her hand wrapped tightly around the strap of her shoulder bag—that called out to him. She wasn’t just a tourist—those he could spot a mile away and avoid with ease. No, she was something else. Something more. Something—he almost didn’t dare think the word—
kindred.

He hunched his shoulders, ducking to avoid the prickling sensation running up and down his back. She was still there. He didn’t know if that was good or bad.

All's Fair in Lust & War by Amber Page
Northshore by Sheri S. Tepper
The Widow Waltz by Sally Koslow
The Pink House at Appleton by Jonathan Braham
Faded Steel Heat by Glen Cook
The House on Maple Street by Stephen King
One Cup Of Flour Two Cups Of Murder (Winnona Peaks Mysteries Book 2) by Emily Page
The Hidden Princess by Katy Moran
Last Act by Jane Aiken Hodge
I Am the Clay by Chaim Potok