After The Rabbit (Waldo Rabbit Series) 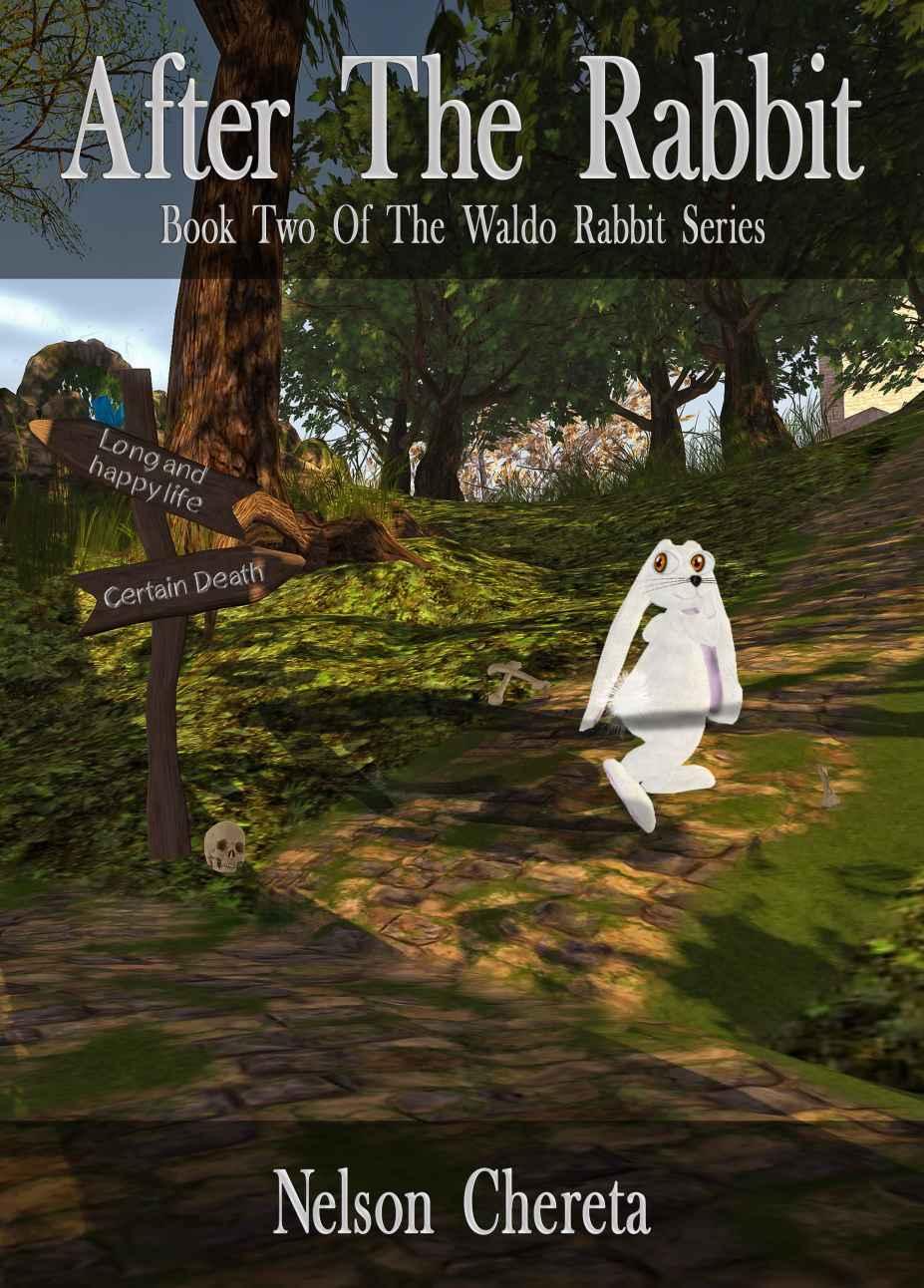 Jennifer Macedo
was a very kind, sweet girl who I knew back in High School (Go Whalers!). We were never more than friends, but she was the very first person I ever showed any of my stories to. I used to keep them in notebooks hidden in the back of my closet. I was your typical fat, near sighted nerd and my stories were way too personal to expose to actual criticism.

When I mentioned I liked to write she begged to read some of my stories. She told me she really loved them and that I should always write. Hearing that meant a lot to me, and I promised her that if I ever wrote a book I would dedicate it to her. We lost touch after High School and I have no idea where she is now or if she will ever read this.

Kelly Kilroy
is my best friend. He is the sort of friend who will tell you you’re being an idiot when no one else will. He will also listen when you really need to talk. I once quit a dead end job and moved down to Florida with him because he told me, ‘I need a roommate and I know you won’t steal from me.’ He gave me a whole lot of crap at times, but he also gave me a lot of good advice that I wish I had taken. While he didn’t specifically help me with writing, he has helped me more than any single person outside of my parents. He has always been there when I needed him and is everything a best friend should be.

And Kelly, if you’re reading this:

“Hey, who are you? What are you doing? Get out of my garden!”

Mistress Winowyll
, and no, that’s not her real name. She has been with me throughout the writing process. Acting as a Beta, giving me story ideas, yelling at me when writer’s block had me stumped, and helping me write some of the scenes. She also pointed out things I would have missed completely due to being the author. Writers have a peculiar blindness because we know everything about our stories and make assumptions that the reader won’t. Luckily I have her to illuminate the blind spots and give me the truth when I need to hear it. Or when it will give her a good laugh at my expense. She also keeps promising to step on me later. Did I mention I both love and fear her?

Waldo had kept them running through the woods all night.

His wand in hand, he kept warning them that they might be attacked at any moment. His familiar / wife / succubus Alice needed no further encouragement. Waldo’s more recently acquired familiar / ogre Gronk was more inquisitive.

“What are we running from?” he asked in an airy, lisping voice that did not seem to belong to his hulking body.

“We’re running away from your grandfather?” Gronk asked. “Is he that scary?”

“His grandfather is an archlich, who can use lightning bolts and other powerful magics,” Alice said.

“He has sworn to chase me to the ends of the world until he eats my heart,” Waldo added.

“What did you do? Steal his candy?”

“I didn’t do anything. Apparently family blood just tastes better.”

Waldo and his two familiars got as far away from the city of Middleton as they could. When the sky lightened, and the horrible ball of fire began to rise over the horizon, they finally halted. Waldo dropped to his knees panting. Alice and Gronk were breathing a little hard but remained on their feet. They were somewhere in the woods, well off any road.

“We got away,” Waldo said between breaths. “The protective wards worked.”

“So maybe he won’t ever find us again?” Alice asked.

“That would be too much to hope for. The wards can block scrying and detection magic, but there are other ways to track someone.”

“We will deal with that later. Right now let’s get some sleep.”

“Sounds good,” Gronk said with a wide smile, two yellow tusks jutting from his lower lip. The ogre was hugging himself and twisting from side to side. “Be gentle with me.”

Alice placed herself between Waldo and Gronk and crossed her arms. “Don’t get any weird ideas.”

“There is not going to be any sharing! He is my husband, and I am the only one who gets to sleep with him. You sleep a safe distance from us.”

Alice suddenly snatched Waldo up and was shoving his face into her bosom. “No sharing! Mine! Got that?”

His legs were unsteady, but Waldo managed to stay on his feet.

This is what I get for messing up the contracts
. Waldo thought.

Waldo was a mage, and both Alice and Gronk were his familiars, bound to him by magical contract. Thanks to the binding ritual he had performed on each of them, Waldo had a special bond that allowed him to sense their strong emotions, always know their location, and gave him the ability to summon them with a single word of magic.

However, the contract should have also forced both of them to obey his every command and made it impossible for them to physically assault him. That was most definitely not the case. Waldo had somehow botched the ritual both times and made it only partially effective. Alice and Gronk were both able to ignore his orders and touch, or even hit and kick, him as they pleased. That left Waldo no choice but to act with more care than a master normally did.

“Gronk, now that we have stopped and actually have a chance to talk, there is something I would like to discuss with you.”

“All right, first off why are you talking like that? When we met you sounded the way I would expect an ogre to. ‘Gronk like pretty man. Gronk no do.’ Why are you speaking with a lisp and using adverbs and adjectives?”

“I don’t know. It just comes naturally to me, I suppose.”

“Then, why didn’t you talk that way from the beginning?”

The eight-foot tall ogre shrugged. “Old owner like when Gronk talk this way. Make Gronk sound like dumb ogre.” He switched back to his high pitched, lisping voice. “I can tell you’re much more refined, master.”

Waldo shut his eyes and pinched the bridge of his nose. He would have been happier with a typical brute of an ogre, too. Though, with the contract being defective, a regular ogre might have decided to spit him over a fire and peel off his skin for a snack.

“The way you talk isn’t the real problem here.” Alice clutched one of Waldo’s arms. “What was the idea of kissing him before?”

Gronk stuck his tongue out. “Don’t be jealous ‘cause he likes me better. He kissed me first, and it made my knees weak.”

Waldo could feel a little vomit in his mouth. “When I kissed you, it was just the final part of the binding ritual. Also, my kiss was chaste. I didn’t put my tongue down your throat.”

“I just couldn’t help myself. You were just so forceful!”

Gronk was hugging himself and twisting from side to side again. “You were just being all manly and dominant. I just couldn’t control myself.”

Waldo shook his head. “You really are gay, aren’t you?”

“As a cabin boy on a six month ocean voyage.”

“You’re gay?” Alice asked. “You actually want to do
that
with men not women? That is sick and unnatural!” Despite being a succubus and having been brought up in a house of ill repute, Alice had some very conservative ideas about sex and how men and women should relate.

“Afraid I can give him something you can’t?”

Alice’s lips peeled back as she let out a low growl. Without intending to, her body was quivering, and she was on the verge of transforming into her true form.

“I don’t have any issue with homosexuality,” Waldo said quickly. He put a comforting hand on her shoulder. The last thing he needed right now was for the two of them to fight.

At his touch Alice calmed a bit.

“I am not gay, though, Gronk. I am not even bisexual. I am only interested in women.”

Alice turned her head and raised a single fiery eyebrow. “By that you mean you are only interested in me, right husband?”

You really would expect a succubus to be more open minded.
“I do not plan to ever have sex with anyone who is not my wife.”

That brought a satisfied nod from Alice. Waldo meant what he had just said, but the words didn’t have quite the meaning Alice thought.

“That’s disappointing,” Gronk said. “Especially after you went and got me all excited like you did. Well maybe that can change.”

“Listen, Gronk,” Alice said. “There is something you need to know. Waldo is not what he appears to be. He isn’t a White Mage at all. He is actually a Dark Mage. You understand what that means, right?”

Waldo nodded. He was dressed in dirtied but still white robes. “Yes, I am a Dark Mage from Alteroth. I came here on a quest, and you will serve me and help me fulfill its requirements.”

“So that means you know all about torture and inflicting pain on people, right, master?”

“That’s great! I’m so lucky! Please do whatever you want with me, master, I am a sub who has been searching for his dom.”

Alice looked from Waldo to Gronk and back again. “Uhm, what are you talking about?”

“Gronk is a submissive,” Waldo said.

“I like to be punished and disciplined,” Gronk said with a playful wink. “Please punish me, master. Gronk has been bad.”

Alice stared at the ogre and then shook her head. “I don’t understand.”

“Gronk is what is referred to as a submissive or a masochist.” Waldo explained. “To put it simply, he enjoys pain and being humiliated or dominated.”

Alice’s mouth twisted. “You
enjoy
getting beaten and shamed? What sort of freak are you?”

Alice turned back to Waldo. “And how do you know about this?”

“Some of the slaves enjoyed that sort of thing. I remember we had this one burly laborer from Rutenia named Gregor. He always wanted to have red hot pokers shoved into…”

“Stop! Stop!” She was waving her hands about. “I do not want to hear this!”

“So will you discipline me, master, and do all sorts of cruel and wicked things to your servant?”

Waldo thought for a moment and then shrugged. “If you like.”

“Are you being serious?” Alice demanded.

“I am willing to make certain sacrifices to keep both of you happy.”