Read All for This Online

BOOK: All for This
>>DOWNLOAD HERE >>READ ONLINE NOW
ads 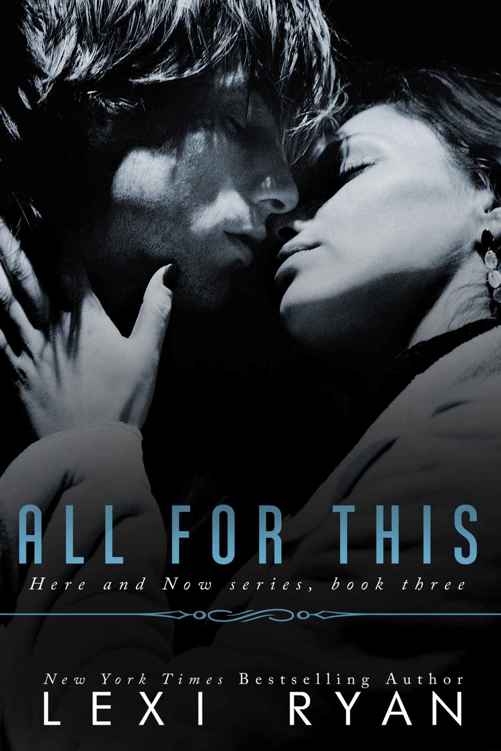 The Here and Now Series (A New Hope Series)

Just the Way You Are

For Annie. You’re a great cheerleader, and when it comes to brainstorming, you’re the bee’s knees. But mostly, I’m just glad that, after all this time, I can still call you my friend. Love and miss you.

All for This
is book three in the Here and Now series. It is not a stand-alone and it’s intended to be read after
Lost in Me
and
Fall to You.

What if you would never remember the day you made the most important decision of your life?

That’s what they’re telling me about the day of my accident—the day I put on Max’s ring and chose him over Nate. I’m counting on the wisdom behind a decision I don’t remember making.

Max is amazing—sexy, sweet, and kind. I was starting to believe happily-ever-after might be in my future after all. Then the unthinkable happened and my world imploded. If I’m going to make this work with Max, I need my missing memories, or at least answers from about those five days before my accident.

But what does my future hold if those answers aren’t anything like I imagined?

Hanna’s hand shakes as she presses it to her lips and her engagement ring flashes at me. She’s in a thin pink robe, her hair falling in wild waves around her shoulders. Max stiffens next to her, bare-chested and protective. It doesn’t take a genius to know what they were doing before they answered the door.

The sucker punch to the gut is too much, and I take a step back despite myself.

I shouldn’t have come here. LA is too insane right now and I need to lie low until this madness settles. But I never should have come to Hanna’s apartment.

It was instinct. As soon as I talked to Vivian and made arrangements for Collin, I came here.

Our eyes are locked. I need to break free and leave—go back to Asher’s and hide from the world while I wait for Collin to arrive.

Max turns to the living room, where he clicks on the TV, and while I’m trapped in the torment in her eyes, the news anchor tells the world that I’m alive and well.

Hanna finally releases me from her gaze and whips around to take in the TV, as if it might provide her with better evidence than my standing in her doorway.

“I just wanted to make sure you’re okay.” The lie scrapes across my heart as it passes my lips. I wanted so much more than to make sure she was okay. There’s something about discovering that you should be dead that changes the way you look at the world. Changes what you’re willing to risk.

“I’m okay,” she says, her gaze still on the TV screen.

Suddenly, she throws her hand over her mouth and runs to the bathroom, and the sounds of her retching carry down the hallway.

Max throws me a look I don’t understand. Maybe he too needs confirmation that I’m really at their door. Then he follows her.

When they return, his arm is wrapped around her shoulders, and she’s leaning against his chest. I want to rip him off her and take her into my arms, where she belongs, but she sinks into his embrace as if she needs him to stand. Another reminder that I don’t belong here.

Hanna might be the best thing that ever happened to me, but maybe for her, that’s Max. Hell, Asher told me Max was no money-grubbing asshole after Hanna for the wrong reasons. And I already suspected that, didn’t I? It was just further evidence.

Dragon Betrayed (Immortal Dragons Book 0) by Ophelia Bell
His Christmas Wish by Marquita Valentine
Teacher by Mark Edmundson
The Weight of Water by Sarah Crossan
Mosaic by Jeri Taylor
A Heart for Rebel by Natal, Mia
Just Murdered by Elaine Viets
The Genesis Project Prophecy of the Seven by C.L. De Leon
A Deafening Silence In Heaven by Thomas E. Sniegoski
The Infernal Device & Others: A Professor Moriarty Omnibus by Michael Kurland