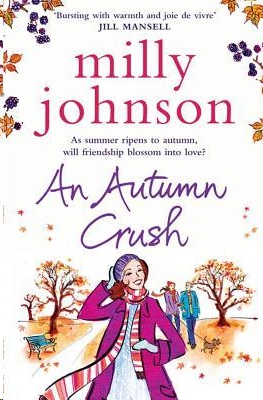 Milly Johnson is a very short – but damned attractive – author from Barnsley, South Yorkshire. She is also a poet, greetings card
copywriter, columnist, after-dinner speaker and winner of
Come Dine With Me
Barnsley. When not working, her hobbies include: sailing on big ships, hobnobbing with the transatlantic wrestling
community, buying red lipsticks, listening to very loud rock music, admiring owls and trying to resist buying crap from eBay.

She lives with her two sons, Teddy the Eurasier and a quartet of decrepit cats near her mam and dad in Barnsley, South Yorkshire. She is a proud patron of Haworthcatrescue.org and ‘The
Well’, a complementary therapy centre associated with Barnsley Hospital.
An Autumn Crush
is her sixth book.

The Birds & the Bees

The right of Milly Johnson to be identified as author of this work has been asserted by her in accordance with sections 77 and 78 of the Copyright, Designs and Patents Act,
1988.

This book is a work of fiction. Names, characters, places and incidents are either a product of the author’s imagination or are used fictitiously. Any resemblance to
actual people, living or dead, events or locales, is entirely coincidental.

Things had been going swimmingly with Miss One O’Clock. Juliet and Coco were united in their decision, and both prided themselves on their razor-like intuition. She was
fragrant, unlike Miss Twelve O’Clock, who drifted into the flat on the crest of a wave of armpit smell – and she had laughter lines, unlike Miss Half-Past Eleven who’d had so much
Botox she looked like she’d escaped from Madame Tussauds. And she was well into her thirties, unlike Misses Ten Forty-Five and Five Past Nine, who were far too young and silly. Anyone who
couldn’t remember
The Karate Kid
first time around was deffo off the list. She was beautifully plump and buxom too, unlike the heroin-chic-thin Miss Half-Past Twelve. Yep, the fact
that Miss One O’Clock looked as if she would happily share a midnight cheesecake was the best indication yet of a good egg. People who relished their grub were more likely to have an
accompanying joie de vivre than those who ate merely to fuel their bodies, Juliet believed. She sighed with relief that her search for a suitable flat-mate was finally drawing to a close, because
trying to find someone to share your home and bills with when you were older and fussier had been the biggest imaginable pain in the bum.

Then Juliet offered her a chocolate digestive.

‘I don’t eat those,’ said Miss One O’Clock, her face contorting like Mr Bean’s. ‘They contain animal fats. And I’m a vegan.’

She made the word sound like she was from another planet, which in Juliet’s eyes she might as well have been. Vegans, Vulcans – no difference, give or take the pointy ears. Pure
unadulterated aliens. Juliet and Coco exchanged knowing glances. Aw God, another one bites the dust, they said to each other via the language of eyeballs. Coco knew that Juliet would sooner have
shared her flat with Harold Shipman than a vegan. She wouldn’t want someone glaring at her as if she was a mass murderer for enjoying a bacon buttie, with full-on Lurpak, or plodding around
in sheepskin slippers.

Miss One O’Clock’s whole demeanour had changed now she was in the presence of established carnivores and milk-slurpers, and there was no point in going on with the interview. She
gave Juliet and Coco a Siberian-winter smile goodbye and toddled off in her plastic shoes.

‘How can anyone get an arse on them that big just by eating celery?’ Juliet marvelled, when the door was firmly shut.

‘Beats me,’ said her friend Coco, primping his dark brown New Romantic curls and pursing his full red lips in camp puzzlement. He was long and stick-thin himself, but Juliet forgave
him that because he had always eaten like a starving horse. He just had an enviable metabolism. ‘Of course, if you’d had me as a flat-mate, you wouldn’t have any of this to go
through.’

‘Coco,’ said Juliet firmly, ‘you and me not living together equals friendship. You and me living together equals me kicking your head in or you scratching my eyes out. I could
not share a flat with you. Ever. And you could NOT share a flat with me.’ She employed the two words she always did when this argument reared up, as it had done quite a lot recently.
‘Remember Majorca?’

Which is why, having lived with him for six years, a man whose smile had ended up in a kidney dish with his tonsils at age ten, there was no way Juliet would
ever
take the business of
choosing who to live with – flat-mate or partner – lightly again. The non-negotiable criteria were: smile-ability, body shape and that old stand-by, intuition. Juliet had no intention
of sharing living space with anyone who tutted if she happened to stuff something in her mouth that didn’t include the whole five-a-day fruit and veg cocktail.

Andrea arrived at two on the dot. The punctuality was impressive, but sadly little else about her was. She looked as if she had just caught a Tardis from 1962. She was willowy with angular
features and wore a floaty frock in bogey-green and matching love beads, had a dated perm that made her look as if she’d been electrocuted, and she stank of very strong patchouli oil, which
set Coco off on a coughing fit when he got a lungful at the door. He judged people by their fragrance. Scents had always been a passion of his and he owned a bijou fragrance shop in town:
Coco’s Perfume Palace. He knew and loved his subject, but patchouli was right up there with Tweed and Charlie, and one notch down from Devon Violets.

Andrea immediately crossed to the far corner of the room and started clapping her hands up in the air.

‘You have a lot of negative energy stored in this space,’ she said, with the same level of distaste one would have used on finding mouse turds in the biscuit tin. ‘And is that
a
bin
I see next to your dining-table?’ She made a few ‘deary-me’ tuts and carried on clapping.

‘Would you like a coffee?’ asked Coco, his eyes watering from the strain of keeping his laughter under rein.

Jennifer Haigh by Condition
The Doctor Is In by Carl Weber
Burn Girl by Mandy Mikulencak
Because We Say So by Noam Chomsky
Breathless #2 (The Breathless Romance Series - Book #2) by Adams, Claire
Roxy's Baby by Cathy MacPhail
Ready for Love by Marie Force
Dismember by Pyle, Daniel
Hamish Macbeth 09 (1993) - Death of a Travelling Man by M.C. Beaton, Prefers to remain anonymous
Fate's Redemption by Brandace Morrow