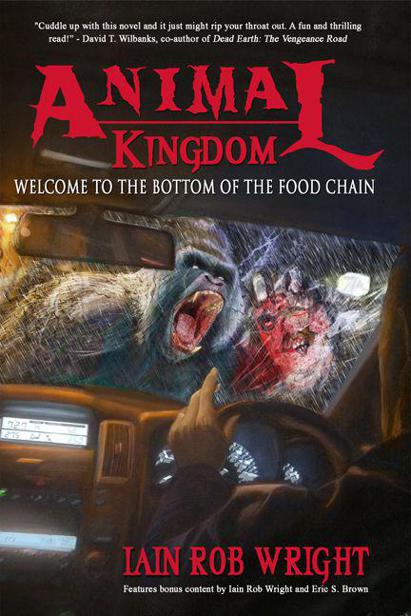 Copyright 2011 by Grand Mal Press. All rights reserved. Printed in the United States of America. No part of this book may be used or reproduced in any manner whatsoever without written consent except in the case of brief quotations embodied in critical articles or reviews. For information, address www.grandmalpress.com

Plus an original short story by Eric S. Brown

The greatness of a nation can be judged by the way its animals are treated.
- Mohandas Gandhi

Human beings are the only animals of which I am thoroughly and cravenly afraid.
- George Bernard Shaw

Joe pulled tight his jacket around him, the biting chill of the autumn air creeping into every crevice of his body and making him shiver. The cold grey of the sky seemed to drizzle down to Earth and coat everything with its dullness to the point it seemed that colour no longer existed in the world. But the dreary weather was not enough to dampen Joe’s spirits. Today was a good day. He was spending the day with his son.

Danny was standing nearby, peering through a set of bars into the zoo’s famous silverback gorilla exhibit – but the leafy enclosure was empty, vacant of its illustrious inhabitant.

Must be getting fed,
Joe thought as he watched his son’s disappointed face. Danny loved animals and would be sad that such a rare and magnificent creature was not available for viewing. But, like most eight-year old boys, his attention span soon reset itself, and it wasn’t long before he was running off in a separate direction entirely.

“
Dad! That man over there is being attacked by a snake.”

Joe stared down at his son, amazed, as always, that his watery-blue eyes could look so much like his own. “Don’t be silly, Danny,” he said, his warm breath turning to steam in the crisp October air around him. “That’s just the zoo’s snake handler. He’s about to do a show, I think.”

“
I wanna go see!” Danny tugged at his father’s arm, deceptively strong for such a slender child wearing a Bret ‘The Hitman’ Hart t-shirt and Velcro trainers. “Hurry, before we miss anything.”

Joe allowed himself to be dragged toward a three-sided lean-to shelter erected besides the zoo’s moss-covered WORLD OF VENOM building. It had been designed to look as if it were made of bamboo reeds. A uniformed man entered the structure from a rear access and began positioning plastic crates onto a wooden table – all of them containing reptiles of various sizes and descriptions. The man’s tanned-leather skin matched his khaki clothing and was weathered, brown and loose. He had a boa constrictor the length of a scaffold pole wrapped around his bony shoulders.

Danny jumped up and down excitedly. “Sweet! I bet that thing could squish him to death, real easy!”

Joe frowned at his son. “Don’t be so morbid!”

“
It’s okay. I just want you to think nice things. Come on, let’s get closer.” Joe took Danny’s hand – half the size of his own – and pushed through the gathering crowd of adults and their children. It wasn’t difficult to get to the front when you were as freakishly tall as Joe. People tended to get out of his way long before he had to ask them.

“
Look at the size of that thing, Dad!” At the front of the growing audience – now close to a dozen people – Danny started jumping up and down again, his wispy, blond hair flopping around in the must-smelling breeze. Childish glee oozed off him in ribbons.

The snake handler turned his attention to them both and Joe cringed, waiting for his son to get a reprimand.
A noisy nuisance
. Fortunately, the uniformed man smiled at them instead.

Danny nodded. “Jake the Snake used to have one called Damien.”

The snake handler wrinkled his forehead, readjusted the slithering reptile in his arms, and then said, “Isn’t that a wrestler from years back?”

Danny nodded enthusiastically. “My dad has lots of old tapes and I watch ’em every weekend when I stay over. My bestest favourite is The Undertaker. Check it out!” He spun around to show the man the design on his backpack.

Danny spun back around and giggled. “No, silly!
Rest in peace
. It’s what The Undertaker says to everyone right before he beats them up with his tombstone.” He rolled his eyes back into his head, so that only the whites were showing, and repeated the words in his best attempt at a gravelly, adult voice. “Rest…In…Peeeaaaace.”

The crowd laughed. So did the snake handler, struggling with his giant brown reptile between each chuckle. He pulled the animal down, away from his face, and then smiled over at Joe. “Fine little lad you have, sir.”

Joe smiled back. “Thanks. He’s a handful though. Just like your snake.”

“
You can say that again! She’s really unsettled today. Won’t keep still for a minute, bless her.”

Danny bopped him on the arm. “Hey! I’m nothing like a snake. I’m gonna tell Mom on you.”

The crowd laughed again, this time giving a collective “Oooooooo!” Joe knew his son was just showing off, but it was nice to see him come out of his shell. After the last few years, with the divorce and everything else, it was good to see that Danny had any confidence at all.

Joe rustled Danny’s hair, messing it up more than it already was. “We best be moving on, little dude, or we won’t fit everything in. Say goodbye to the nice man and his snake.”

Danny twisted his face into a frown, but did as he was told. His shoulders slumped as he spoke. “See ya, Mister. Thanks for letting…Hey Mister…are you okay?”

Joe was alerted by the tone of his son’s voice before he actually saw anything was wrong. The snake handler was writhing around, struggling beneath the weight of this huge reptile. It coiled its way around his ribcage and was slithering up toward his neck.

“
Step away, Danny.” Joe moved in front of his son, keeping him back from the wooden barrier that separated the crowd from the lean-to shelter. The slithering reptile had begun to form a noose around its keeper’s neck and was slowly tightening with each convulsion of its muscular body. The crowd started to murmur, the first gentle stages of panic taking hold.

The snake handler began to choke, throwing out his arms in wild desperation. Joe jumped the barrier, dashed toward the shelter just as the struggling man dropped to his knees on the plank-wood flooring. The fragile walls of the bamboo shelter shook beneath the impact.

“
Stay calm,” Joe shouted in a voice that was the exact opposite. He reached out to grab the snake, but recoiled immediately.

Whoa! Do I really wanna put my hands on this thing? Can it bite me?
Joe allowed himself to hesitate only a moment longer then gave himself a mental shove.
Come on! There’s a man’s life at stake. Do something!

He snatched at the thick reptile and pulled back hard, fighting away revulsion as his fingers made contact with the rough, quivering flesh – cold to the touch. Several seconds of yanking and tugging made no difference. The snake’s grip became even tighter. The desperate handler turned a deep purple as the pressure pushed his eyeballs a half-inch out of their sockets, making them bulge like a squid’s. Joe felt a roiling wave of sickness crash through his insides.

I can’t do anything. I can’t get this thing off of him and he’s going to die. I never watched a man die before...

Joe turned to the anxious crowd and checked that his son was nearby. “Don’t just stand there!” he shouted at them. “Someone go get help, now! Danny, you stay where you are and close your eyes. Everything is okay.” He could tell by his son’s fearful expression that he didn’t believe it. Moving back around, Joe saw that blood was now trickling from both of the snake handler’s nostrils. The beast wrapped around the man’s throat was glaring at Joe, malevolent eyes boring into his flesh. Its forked-tongue flicked back and forth, tasting the air.

People in the crowd started backing away, as if somehow the snake handler’s peril was infectious. Some of them scattered immediately, crying out for help as they fled in all directions, while others retreated in silence, unable to take their eyes off the harrowing scene in front of them. Joe didn’t go with either group. He was rooted to the spot.

Locked in a death stare with a nine-foot Boa Constrictor.

The sound of Danny’s voice allowed Joe to regain control of his senses. He turned around to find that his son had approached the wooden barrier and was about to crouch underneath it. Joe flung out an arm and shouted. “Stay there! I’ll handle th–”

From the corner of his eye, Joe sensed the movement of the snake, and turned just in time to see it strike. The adrenaline in his body pumped his reactions just enough that he was able to lunge aside of the attack, a mere split-second before the murderous reptile sliced its fangs through the air. The snake handler flopped face down on the floor, the boa constrictor slithering out from beneath the body. The man was dead.

Joe sprang into action, exiting the shelter and vaulting the barrier. He scooped Danny up in his arms and chased after the fleeing crowd. Help still had not arrived, but it hardly mattered anymore now that the snake handler was dead.

Someone still needs to grab that damn snake though.

And then destroy the fucking thing!

Joe kept his lanky strides fast yet steady, not wanting to trip and fall on the unforgiving pavement whilst carrying his son. Blood pounded in his eardrums as, all around him, people scattered in all directions. It was strange to see just how
many
people were panicking. There had been perhaps a dozen men and women at the snake handler’s hut, along with a handful of children, but as Joe looked around now, he saw at least three times that many.