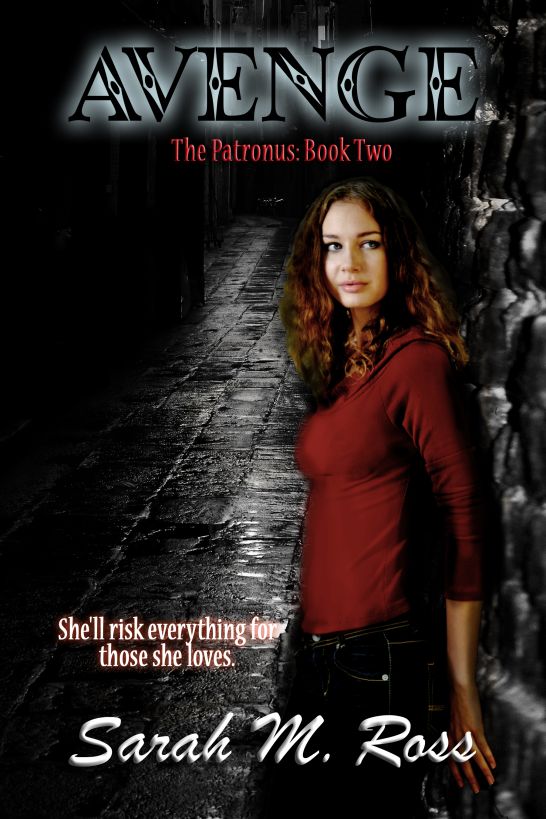 Without limiting the rights under
copyright reserved above, no part of this publication may be
reproduced, stored in or introduced into a retrieval system, or
transmitted, in any form, or by any means (electronic, mechanical,
photocopying, recording, or otherwise) without the prior written
permission of the above author of this book.

This is a work of fiction. Names,
characters, places, brands, media, and incidents are either the
product of the author's imagination or are used fictitiously. The
author acknowledges the trademarked status and trademark owners of
various products referenced in this work of fiction, which have
been used without permission. The publication/use of these
trademarks is not authorized, associated with, or sponsored by the
trademark owners.

Discover other titles by
Sarah M. Ross at Smashwords.com.

This ebook is
licensed for your personal enjoyment only. This ebook may not be
re-sold or given away to other people. If you would like to share
this book with another person, please purchase an additional copy
for each person you share it with. If you're reading this book and
did not purchase it, or it was not purchased for your use only,
then you should return to Smashwords.com and purchase your own
copy. Thank you for respecting the author's work.

A fierce battle raged all around me.
Grunts and growls filled my ears while the tart, coppery scent of
blood caused my nose to wrinkle. I blocked everything out, focused
on protecting my friends and the innocent soul cowering in the
corner from the flea-infested beasts who threatened to attack. We
were barely holding them at bay, outnumbered two to one, but I set
my jaw confidently. We’d been in worse situations than this and
still emerged victorious.

“
Son of a—I’m gonna need
another shield over here, Lucy!”

“
What’s happening, Adam?” I
yelled, risking a glance at him. I couldn’t afford to break my
concentration.

“
The little prick has a
knife. What kind of werewolf carries a knife?”

“
Idiot won’t have any teeth
left after you’re done with him,” I scoffed, shaking my
head.

“
That’s not the only thing
he’s about to lose.”

I knew that tone. Adam was about to
lay a beat down even an MMA fighter would tap out of. I threw up
another shield around Adam to give him a moment to inspect his
wound and change weapons. I resisted the urge to move even though a
werewolf inched closer to me. I couldn’t afford the luxury of
dropping my concentration for a moment, even if it did cost me a
few bite marks. It would hurt him a lot more than it would hurt me.
I trusted that my team would get the snarling beast away from me
before any real damage was done.

“
Luce, I’m good, tag me
in,” Cassie yelled as she tightened the strap on her cuffs and
twirled her silver dagger in anticipation. I strained to hear her
over the sounds of battle that surrounded me. I dropped her shield
and watched as she deftly plunged two daggers into the beast’s
torso and twisted, ensuring he wouldn’t be going anywhere for a
while. She gave me a quick nod, which I knew was her way of saying,
“Hells yes!” and moved on to more targets.

“
Max, behind you!” He
ducked and rolled just as a wolf flew at him. He missed being
clawed in the back by millimeters.

“
I’m good. Thanks, babe.”
He quickly bounced back to his feet and reloaded.

“
We’re almost there. A few
more guys and we’ll have them all.”

The were’s hot, wet breath stuck to
me. His slimy tongue hung out of his mouth, ready to touch me and I
gagged a little in my mouth. I could put up with a lot, but
seriously, that was just gross!

“
Oh buddy, you have no idea
what kind of hell is about to rain down on you.” I pushed a button
on the gold bracelet that indicated I was a Patronus. It was
something we all attached to ourselves and was like a command
center—controlling our communications, weapons, and powers. And now
for me, it helped me control my new power. Each of the members of
my team had been granted a new gift by the Council, and mine was
the first to manifest itself. As soon as I released it, the cool
rush of silver slid over and around my body. It invigorated
everywhere it touched, like a bucket of cool water on a warm,
summer day. As the liquid adhered like a second skin, the wolf got
a mouthful and howled at the pain, shaking its head furiously to
try to expel the poison.

Max rushed over to finish the prick
off and recover the soul into the solid silver containment syringe
by sucking it directly out of the heart of the beast. I let my
silver skin disappear, missing the cool rush it gave me. As the
soul was successfully locked into the safe we brought, he leaned
over and gave me a quick kiss on the cheek. “I think we’re good
now, babe. There are less of them than us, so you can drop the
shields now. This is the home stretch.”

“
I’m exhausted. How many
did we get tonight?”

“
Six, but we’ll talk later.
I’m going to go help James. Only a few more, but they’re wicked.
Then we’ll go home. Stay here and protect the souls.” Max capped
the lid on the syringe and placed it into the airtight containment
unit we used to transport. The container beeped once indicating it
was secure, and I used the keypad and my bracelet to lock it up and
conjured up a backpack to place the unit in.

I wanted to help my friends, but we’d
been fighting for hours, and holding up at least a half dozen
shields at a time was beyond exhausting. Now, as I sat on a rusty
metal bench in the dingy rest area covered in sweat, blood, and
clumps of fur, I wanted only to curl up in my bed and sleep for a
year. I needed to hold out a little while longer.

I let the adrenaline flow and do its
job of keeping my body alert. Inside, I couldn’t help but feel
heartbroken. She wasn’t here. None of the souls we recovered were
hers. It was another false lead. But now was not the time for my
own problems. We had a job to do.

I stood guard as my team demolished
the enemy. This pack of weres had staked out a nursing home outside
Palm Beach, Florida for weeks waiting for their opportunity to
pounce. We’d set up surveillance at potential targets across the
state we covered, and were lucky when these wolves got sloppy and
didn’t try to hide their plan. When we saw that they’d begun
sneaking in at night to steal the elderly people’s meds in order to
speed up their deaths, it was the last straw. We gathered our team
and set off.

Max and James spotted the last two
werewolves, waiting outside Mr. Leonard’s room. While they watched
the facility, the werewolves picked out the easiest targets. The
nursing home was a renovated old Victorian style house that now
held eight private rooms and employed two full-time nurses. From
our surveillance, we knew that every night as the nurses went on
their dinner break, the old man snuck out to sip from the flask of
vodka he hid in the planter behind the washing machines in the
laundry room. Laundry day was his favorite, always asking the
nurses if he could help fold their panties. Mr. Leonard bribed
nighttime security clerk to refill the flask, and the werewolves
were well aware that he snuck down here every night after Jeopardy.
Max and James intercepted the weres just as they were about to
scare the old man to death.

Now, with only two weres from the pack
remaining, they knew they had no shot against us and retreated.
That was not going to happen. We needed to recover those
souls.

“
Lucy, come with me.”
Cassie waved me over. I stood up, placing a shield over the
container so no one could steal it, and flanked Cassie’s side as we
covered the back entrance and the boys took the front. This was
going to get dirty. When weres were backed into a corner, they went
down swinging.

“
Colts or knives today,
guys? What’ll it be?” Adam called out to the team. The wolves
crouched, ready to spring, fingers itching to start the final
showdown.

“
As much as I love the
sound of silver blades tearing through flesh, last time my favorite
shirt was ruined with gashes! I say we go for guns and make this
quick.” Cassie pulled a Berretta from her side pocket, cocked it,
and placed her finger on the trigger. “I’m ready to go
home.”

“
You heard the lady, boys.”
James, Adam, and Max nodded simultaneously and each pulled out
their own gun, pairing up at the two exits. We’d corralled the pack
into the outside employee break area. It was surrounded on three
sides by thick walls of the building and the other side contained a
twelve-foot barbed wire fence. The wolves couldn’t jump that high
and the only way out was the door beside the fence or through the
building. Both exits were now covered completely.

The wolves sprung,
interrupting James. Each wolf chose one of the exits, claws and
teeth bared to inflict maximum damage, but my team was too good.
The wolves whimpered as the bullets sprayed and pierced their
bodies and they collapsed to the ground. Adam and Cassie quickly
collected the souls and smiled as the realm door appeared to take
us back home once again.

I stepped out of the realm door and
shivered, watching goose bumps dance across my flesh at the odd
feeling. No matter how many times I transferred realms, I would
never get used to it. When I first learned, I started out on the
bunny slopes of transfers, and thought, “Hey, this is no big deal.
Easy-peasy.” I quickly learned that practice doors were nothing
like the real thing, and going in and out every few days really
wore me down. The burning pressure on my body still made me weak in
the knees.

Tears threatened, but couldn’t stand
the looks of pity so I stalked away from everyone, far enough away
before caving in to the anger and frustration. I needed a few
minutes alone. Coming home once again empty handed took its toll on
me. I hated making a spectacle of myself and felt pathetic. My
emotions were all over the place. I threw my favorite knife down
toward the ground and watched it disappear back into my bracelet
before it ever hit the soft earth. The design left behind reminded
me of a Jackson Pollock painting, the still fresh blood from the
tip splattering the grass.