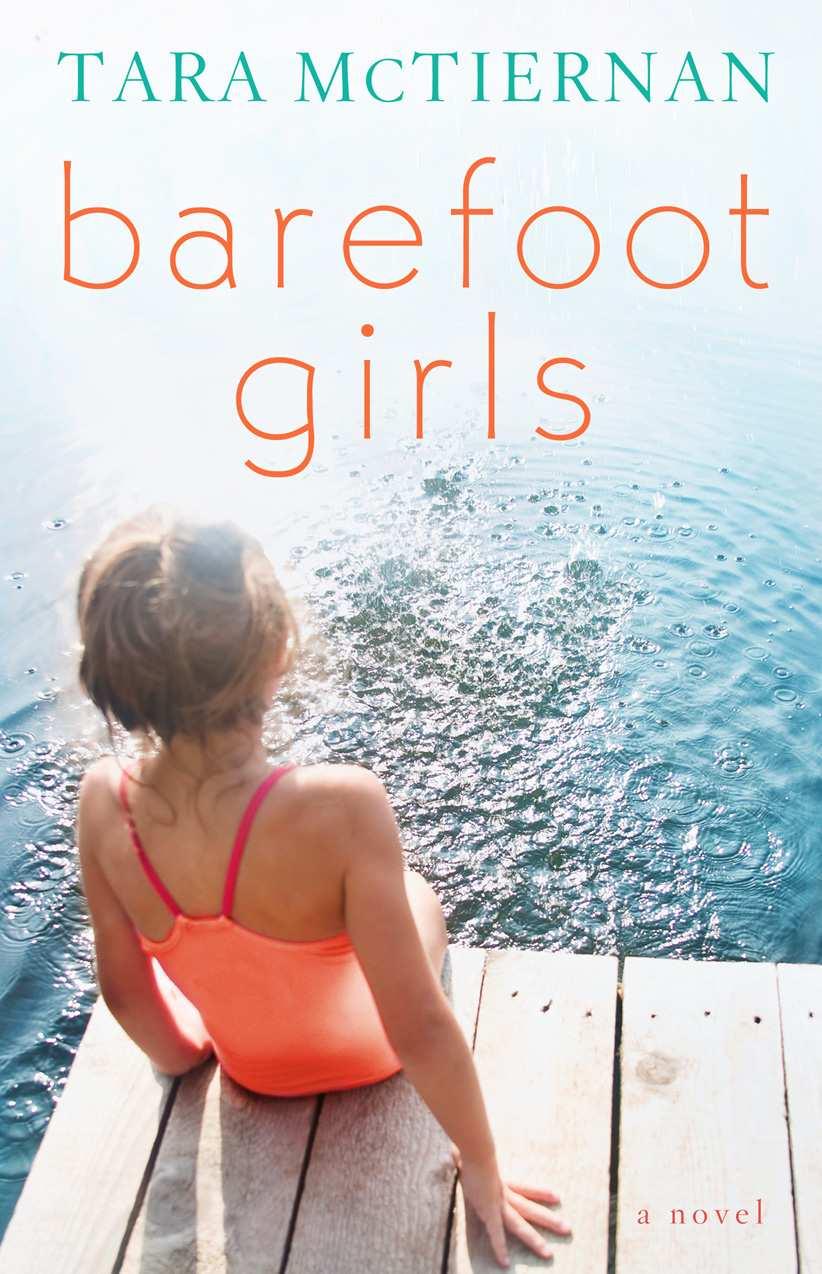 When her hometown newspaper reviews Hannah O’Brien’s newly released novel, the nature of her book is called into question when the reviewer suggests it is a memoir depicting her neglectful alcoholic mother – Keeley O’Brien Cohen, the most beloved of the Barefoot Girls -  a little too accurately for fiction, citing rumors rather than sources.

Deeply hurt and betrayed, Keeley cuts Hannah out of her life. Desperate, Hannah does everything she can to apologize and explain, but her pleas fall on deaf ears. Meanwhile, the rest of Hannah’s life starts to unravel, pushing her to risk her engagement to Daniel, the one man who had been able to scale the high walls around her heart. At the eleventh hour, the Barefoot Girls are able to convince Keeley to send Hannah the keys to the Barefooter house, the home and heart of their friendship. Barred from their clubhouse since she was twelve, Hannah grabs the chance to visit the little shack filled with memories and perched at the tip of Captain’s Island in the Great South Bay on Long Island, New York.

As Hannah battles to come to terms with her equally blessed and troubled childhood and understand her mother and her sister-close friends, she’s confronted with the power of forgiveness and the dangers of holding on to the past.

Barefoot Girls
is for anyone who ever drank margaritas on the beach with their toes in the sand or fell in love with island-life. More than an unearthing of one family’s dark secrets, it’s the story of the last of a generation of women who grew up before child car seat laws and required bicycle helmets, where the world still held that last glow of innocence and a devil-take-the-hindmost freedom. It’s about the special bone-deep bond between mothers and daughters. It’s about life-long friendships and the essential pacts and promises that hold them together…and the world that tries to tear them apart.
Barefoot Girls
is a story that will make you laugh and cry and then laugh again…one you’ll want to pass on to the women you love most.

All rights reserved. No part of this book may be reproduced, scanned, or distributed in any printed or electronic form without permission. Please do not participate in or encourage piracy of copyrighted materials in violation of the author's rights.

The author is grateful for permission to reprint lyrics from the following:

Words and Music by Bobby McFerrin

For the four wonderful women who raised me:

Bonus Material and About the Author

Hannah woke with a jolt. What was that? Opening her eyes hurt, they were so swollen from crying they stung.

The air had changed; the electricity that pinged through it when her mother was around was back. Dark blue light flooded around the drawn shades on her open bedroom windows and the oven-blast heat of the day before had left finally, leaving the cooling air settling like dust. Night insects chorused outside in the trees and a car passed the house slowly, headlights briefly piercing in wedges past the curtains and shades.

She listened for the sounds of her mother. Could her mommy-sense be right – had she come back? Was Hannah finally forgiven? If only she knew what she had done wrong. She slid her blue-pajamaed legs out over the edge of the bed and leapt to the floor, careful to land quietly in case her mother was home and had gone to sleep.

She picked up and pulled on her pajama top that she had torn off earlier and tiptoed to her door to open it and peer down the hall towards her mother’s room.

The door was shut!

Hannah started to do her happy dance and then stopped. Don’t wake her, whatever you do. She looked back at the bed and then down the hall. She couldn’t go back to bed. She was too excited - it was singing through her.

She thought of all the quiet activities she usually turned to when her mother was sleeping or just locked up in her room. Reading, coloring, Barbies: these were good. TV, games that made noises or played songs: these were bad.

But the good quiet things weren’t going to release this building pressure, this need to run around and jump for joy. Her mother hadn’t been home for two days. Hannah had eaten all the bread and peanut butter and raisins and applesauce and had even found a bag of stale Mint Milano’s on her mother’s bedside table which she had finally eaten in desperation, knowing her mother would be mad at her for eating her favorite treat.

Then there was no more food except things like bags of flour and boxes of baking soda. What was worse, the house’s shifting quiet had started to scare her. When she went to sleep the night before, she felt such a deep hopelessness it was a like a black tarry thing living in her chest, eating her insides and hollowing her out.

But Mommy was home! Hannah was forgiven! No, she needed to do something special to celebrate. Hannah squeezed past through the cracked-open door to her room, knowing that the door squeaked loudly when opened all the way, and tiptoed down the carpeted hall and then down the stairs, picking her way carefully through the downhill squeak-minefield that was the stairs of the old house.

She walked through the hallway and kitchen and out the back door, stepping onto the cool flagstone patio and then gently shutting the screen door behind her. The patio was just as Mommy and the Barefooters left it two days ago – metal chairs pulled away from the table as if those sitting in them had to jump up and run, four loungers all lined up from when they had been sunbathing earlier in the day, the card table they used as their cocktail buffet still set up between the two groupings of chairs and covered with crumpled cocktail napkins, dried-up lemon wedges, half-filled tumblers, and a pitcher holding the remains of their margaritas and a lot of black bugs that had found manna before floating lifeless on top of the pale green liquid.

On the table, among the dirty dishes and empty wine glasses, was a narrow box. “Hannah’s Magic Wands” was written on the paper that had been wrapped around the original packaging of the box and glitter had been sprinkled liberally on the paper. The front featured Aunt Amy’s perfectly-drawn cartoon of Tinker Bell.

Hannah had asked Santa for a magic wand last Christmas on her handwritten up-the-chimney list and had given it to her mother to prepare it for their annual ceremony with the Barefooters that involved a big fire in the fireplace, lots of toasted marshmallows, Aunt Pam’s funny rendition of “The Night Before Christmas” read entirely in the voice of Sesame Street’s Grover, and the grand finale of placing Hannah’s wish list in the fire to send it to Santa.

Her mother would rub Hannah’s list with all of her lucky charms for good luck, especially the soft blue artificial rabbit’s foot Hannah coveted, and say a prayer for what she called a “windfall” – something about money.  The afternoon her mother had taken the list for Santa from Hannah to work her magic on it, she found Hannah playing with marbles on the kitchen floor and making up stories about their marble-lives. Her mother hunkered down on the floor next to where Hannah sat, her beautiful fairy-princess face inches away from Hannah’s and said, “Hey, ladybug. Watcha doin’?”

Hannah looked up from her game. Her mommy, Keeley Morgan O’Brien, was the most wonderful person ever. Full of magic and excitement and what she called “high hilarity”, Mommy had the ability to make anything fun. To top it off, when Keeley focused her morning-glory-blue eyes on her daughter, asking questions and listening seriously to her answers, she made Hannah feel important, deeply loved and remarkable. Hannah was her special wonderful, a gift from God. Her mother always had time for Hannah, that is, unless she was sick in her room and didn’t want to talk to anyone, not even the Barefooters.

Not wanting to talk to the Barefooters was the bottom of the barrel and when that happened Hannah’s world became black and brown for days. The Barefooters would babysit Hannah in turns, pretending the closed door at the top of the stairs wasn’t there and sleeping on the pull-out sofa, trying to make things okay. This would go on until one morning when Keeley would open her bedroom door, call for Hannah, and sweep her daughter up into her arms to hug her and kiss every inch of her face. Then life would be wonderful again.

Hannah answered her mother’s question honestly, knowing her mother loved to hear all about the stories that her daughter told herself. “Well, the blues have taken over the world and live in this castle over here, see? And the browns are the bad guys and they’re going to get the blues and they’re making a plot.”

“What are the blues going to do?” Keeley asked, her eyes even bigger.

Keeley pouted her lips thoughtfully for a moment, considering. “Wait, I know!” Keeley said, lowering her voice to a gravelly low pitch, “They will invoke the magical spell of Ooboo Dooboo and create an invisible force-field around their castle. Only the blues know the spell of Ooboo Dooboo!”

“That’s it!” Hannah shrieked. She put her hand on top of the blue marbles and started rolling them in a circle wildly. “Ooboo! Dooboo! Ooboo Dooboo!”

“Done!” Hannah said, and threw her arms over her head, palms of her hands outward.

Keeley lifted Hannah up and they marched around the house in victory, Hannah’s arms over her head, grinning. Keeley sang the victory song “We Are the Champions” that talked about no time for losers. After a full circuit of the house, Keeley walked them over to their favorite talking-place, the yellow mushy pillow-strewn sofa in the kitchen next to the window that looked out on the garden, where they collapsed in satisfaction.

“So, kiddo, I got a question for ya,” Keeley said, wiggling Hannah’s folded Christmas wish list out of her jeans pocket.

“Did you rub it with the blue foot yet, Mom?”

“Of course I did, and my four-leaf-clover and the piece of the pyramid, and your baby-Boo,” Keeley said, referring to Hannah’s favorite stuffed animal that once was a white fluffy lamb and now looked like a rolled-up nubby brown sweater with no sign of facial features, ears, or even legs.

“Good, ‘cause I have to get everything this year, Mommy. I’ve been so good!”