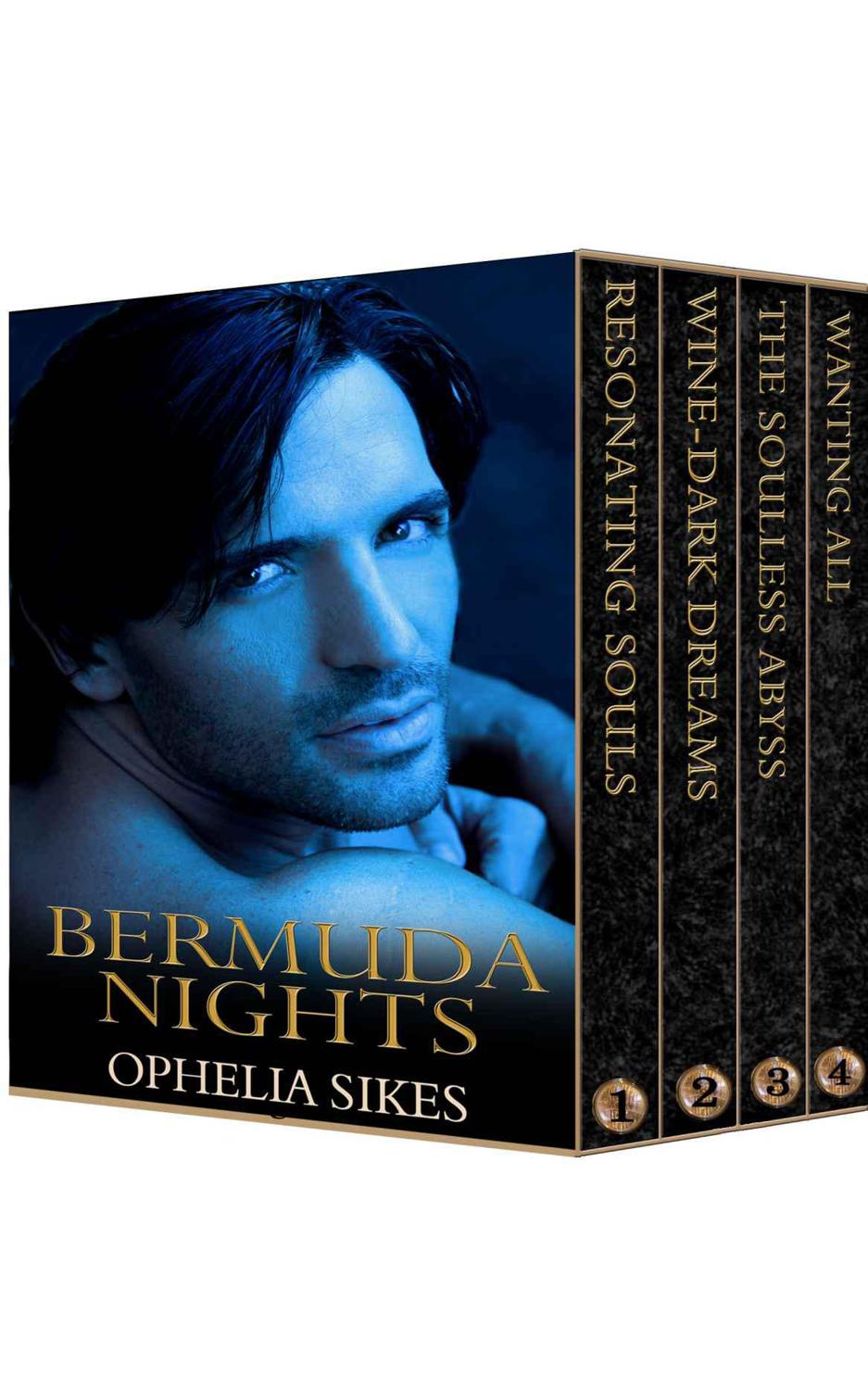 Books One to Four

This is a work of fiction. Names, places, and events are either the products of the author’s imagination or used in a fictitious manner. Any resemblance to actual persons, living or dead, or actual events is purely coincidental.

Half of all proceeds from this book benefits battered women’s shelters.

Whatever our souls are made of,

His and mine are the same.

The gleaming white cruise ship shone beneath the brilliant October sky, its length enormous, sleek, bursting with intrigue and promises of delight. Kayla turned at my side, her long, blonde hair swirling with her movement. Her hot-pink lips curved into a smile.

I couldn’t help but grin in return. With everything that had happened this summer, I needed this. I had nearly collapsed during Boston University’s grueling finals week. Next, despite my stellar grades, I endured four hellish months of all-day interviewing before I finally landed my first real job. On top of it all, Jeff, my boyfriend throughout junior and senior year, had texted me his terse break-up message just as I was taking my seat for my graduation ceremony. He couldn’t even spare an hour to say goodbye in person before he left for his dream job in Minneapolis.

Now that was all behind me.

I drew in a deep breath of the Boston Harbor salt air. This week laid out before me with soft beaches of pink sand, shimmering strawberry daiquiris, and a harem of handsome, tanned waiters at my beck and call.

Kayla and I strolled up the covered gangplank to the ship. Our eyes were drawn first to the long rows of portholes and then to the balconies higher up on the massive structure. The railings glistened as if they had been freshly polished just for us.

Kayla stumbled to a stop, gape-jawed. My gaze automatically followed hers.

There, on the balcony of one of the larger suites, a red-headed woman with thick hair nearly to her waist was leaning forward against the side wall of the patio. Her hands stretched, splayed, before her. A tall, muscular Viking of a man was behind her, sliding her black skirt up around her hips. He moved his hand to his belt. Even from here we could see that the man was proportional.
Nicely
proportional.

He eased his body slowly, steadily, against the woman’s. We watched as she melted back against him, as pleasure coursed through her at his controlled, teasing entry.

Kayla’s voice was rough. “Good God. I want some of that.”

I found I couldn’t look away. The Viking’s hand slid up beneath the red-head’s crisp, white shirt to caress her ample breast. She arched greedily into him. He rode against her eager body with steadily increasing rhythm. She threw her head back with desire, the harbor noises drowning out any cries she might have been doing her best to muffle.

A wave of envy rolled through me. Had I ever felt that surge of wild abandon with a man? Certainly not with Jeff. He had been cold, efficient, mostly interested in his own pleasure. The times he bothered to think about what I wanted, it had seemed more out of necessity, out of a balancing of his mental spreadsheets than from a real desire to connect with me.

I suddenly wished, with every cell in my body, to experience an encounter like what played out before my eyes. I craved the total release in which the woman was thoroughly immersed.

Kayla was still transfixed, and I found my voice. “Kayla, I doubt the man is on call for room service. Maybe he and that red-head are on their honeymoon,” I watched them in motion, the freeness in every move they made. “Maybe this is their first moment together as man and wife.”

Kayla shook her head, her eyes gleaming with intention. “Passengers won’t be allowed in their rooms for another two hours,” she pointed out, turning her gaze and striding up the gangplank with fresh zeal. “He’s definitely a member of the crew. Once I track him down, he’ll be sharing that muscular body of his with more than just the maids.”

I gave a wry smile, trailing after her. Kayla was a force of nature when she got an idea in her head. Tall, curvaceous, she took it for granted that men would race to please her - and most of the time she was right. I was content to watch from within her shadow. I was dark-haired, slender, and until quite recently, I’d always been with Jeff, held firm beneath his attentive thumb.

Now I was free.

The idea shimmered within me, and I took in a long, deep breath. Maybe this vacation would finally shake me apart from the clinging tendrils of my past. Maybe, for once, I could let loose and see just what life truly had in store for me.

The sail-away party was all the TV commercials made it out to be. A dreadlocked reggae band was playing full blast amidst strobing lights and massive plastic palm trees. The hot tubs were bursting with polka-dot bikinis and rippled muscles. Everywhere you turned a waiter was offering a rainbow of tropical drinks. Kayla had stopped craning her neck every five minutes in search of her blond warrior and had settled into the groove, her neon-pink bikini placing her curves on prominent display. My black one-piece was slightly more modest, although its gold edging and plunging neckline brought out my toned features. I adored swimming, and my body had been sculpted by the years of my passion for it.

A lanky guy, his face peppered with tan freckles, came over with a smile. “Nice ship, huh? Amazing this’ll be our home for the next week.”

Tension rippled down my shoulders, and I took a step away from him. “Yes, I’m looking forward to it.” My head swiveled, and I spotted Kayla leaning on one of the hot tubs. I gave the guy a nod before walking over to join her.

Her eyes danced as I reached her. “That guy was totally into you,” she teased. “He’s been watching you for ten minutes now. And the moment he builds up the courage to go over, you flee!”

My response was automatic. “But if Jeff had -”

She laughed out loud. “Lord, Amanda, we’re going to have to break you of that habit. Jeff’s jealous streak was just one of his many flaws. You’re free of him now, girl!”

It was still hard to take in. I was free. I could talk with a man for more than thirty seconds without fearing Jeff storming in on us. Each time it had been the same routine. First Jeff would say something obnoxious to drive away the intruder. Then the rest of the evening would be a non-stop harangue about my lack of control.

I gave a wry smile. “It’ll take me a while to get used to this,” I admitted.

She nudged me in the ribs. “You’ve got one night,” she instructed. “After that, I’ll be taking drastic action. You’re going to enjoy this cruise, no matter what it takes!”

The next few hours floated by in a pleasant blur. The music played, we soaked in the hot tubs, and we lounged on the tiers of beach chairs, basking in the sun-drenched afternoon. Men drifted by to flirt with Kayla with regularity. Some talked with me as well, but that frisson of nervousness still triggered each time.

I was patient with myself. My reactions had been embedded in me throughout the two long, soul-draining years of my relationship with Jeff. They would take some time to undo - but I would get there. I would recover, heal, and move on.

There was the deck-side BBQ with juicy burgers and buttered corn-on-the-cob. The band kicked into high gear for the sunset dance party, and Kayla and I swirled joyfully in the mob.

At last the breezes became too brisk to ignore. Kayla rubbed her hands on her arms, shivering. “OK, I need something warmer,” she called out as the band bowed and waved their farewells. “Head in with me?”

In a few minutes we were down in our snug room which was already littered with tins of make-up, flocks of high-heeled shoes, and a kaleidoscope of short dresses. I slipped on a pair of tight black jeans, a crimson top, and black leather boots. Kayla was going with gold this evening, with a shimmering shirt and clinging white leggings. She winked at me as we pushed open the door.

We could hear the rock music thumping long before we reached the club. We rounded the corner, and Kayla stopped in her tracks, her eyes wide with delight. There on stage, dressed in a black t-shirt and black jeans, was her Viking god. His blond hair shone in the stage lights, and he had his head thrown back, belting out the song.

Kayla was off like a shot, wriggling her way through the throng to dance right in front of Thor. His eyes swept down to hers, a wide smile spread on his lips, and I shook my head. It looked like she might be getting her wish after all.

A waiter was by my side, balancing a round tray of at least ten Champagne flutes with the ease of a ballet dancer. “For you, miss?”

I put my room card down on the tray, took up two of the flutes, and nudged my head toward an empty table at the left side of the dance floor. He nodded and headed back to the bar to make the charge. I pushed my way through the noisy throng to take my seat. The waiter was right behind me, handing back my card and receipt to sign.

The task done, I turned my attention to the band. They were a four-piece, blasting the room with rock tunes. The drummer was an ape of a man, bald, muscular, with tribal tattoos down both arms. The bass player was tall, reedy, with stringy brown hair. The lead singer had descended from Valhalla to sing down to Kayla, his eyes drinking in her gold cleavage.

My eyes swung left to the lead guitarist. The stage lights angled to dazzle my eyes, and all I could see was his guitar and hands. The guitar was a gorgeous instrument with a natural wood finish. Was that mahogany or something more exotic? My grandfather would have known. He had loved carving wood. Some of my fondest memories were sitting by his side while he carefully worked on a piece, causing the roundness of a Bufflehead duck to magically surface out of a formless hunk of pine framing lumber.