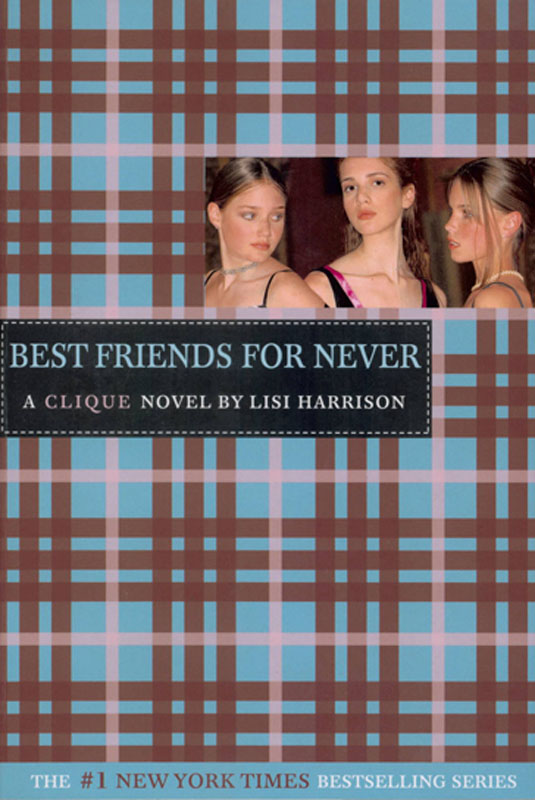 A very special thankyou to Ben Schrank, Lynn Weingarten, Les Morgenstein, and Josh Bank for your ongoing faith and guidance and for believing in me in that special way that's usually limited to family members. And to Lauren Levine and Deb Savo-the measure of a true friend is someone who reads more than five different versions of your first novel.

For more of your favorite series, go to
www.pickapoppy.com

THE BLOCK ESTATE: THE LIVING ROOM

THE WESTCHESTER MALL: LEVEL I

THE LIMITED DRESSING ROOM NO. 5

THE BLOCK ESTATE: THE GUESTHOUSE

THE BLOCK ESTATE: WHEN HELL FREEZES OVER PARTY

WHEN HELL FREEZES OVER PARTY: PITS OF DESPAIR

THE WESTCHESTER MALL: LEVEL I

The only thing harder than getting in is staying in.

Revenge Of The Wannabes

Invasion Of The Boy Snatchers

The Pretty Committee Strikes Back

It's Not Easy Being Mean

Sealed With A Diss

And keep your eye out for
Bratfest At Tiffany's
— and THE CLIQUE'S new look — coming February 2008.

If you have to ask, you'll never be on …

And keep your eye out for CALIFORNIA DREAMING, coming April 2008.

IT'S NOT EASY BEING MEAN

Massie Block hated herself for looking so beautiful. She angled a silver soup spoon toward her face and quickly glanced at her reflection. The new caramel-colored highlights in her dark hair brought out the amber flecks in her eyes and made them sparkle, just like her stylist, Jakkob, had promised. She was debuting a brown suede miniskirt that made her butt look even perkier than usual, and her arms and legs were lightly dusted with gold shimmer powder. Massie dropped the spoon and pushed it aside. She couldn't believe she was wasting this redcarpet outfit on her father's birthday dinner, especially since they were spending it at home with the Lyonses.

“Happy biiirthday, dear William, happy birthday to youuuuuu.” The two families finished their song with a round of light applause. William's face turned purple as he struggled to blow out all forty candles at once, and Massie couldn't help giggling. It was the first time she had smiled all night.

They were seated around an elegant oak table in the Blocks' dining room, unable to fully see one another because of the elaborate centerpieces that overflowed with seasonal fruits and flowers. The teardrop-shaped bulbs on the crystal chandelier had been dimmed. The soft warm glow from the red candles was the room's main source of light.

Massie had been forced to sit between the two Lyons kids thanks to her mother's need to micromanage. On her left, Claire was shoveling a massive piece of sugary cake into her mouth as if
Cosmo
suddenly declared “fat” was the new “thin.” Massie turned away. To her right was Todd, Claire's ten-year-old brother. Massie watched in disgust as he reached his icing-covered fingers over her plate to grab the pitcher of grape juice.

“Eew.” Massie said under her breath.

She folded her thin arms tightly across her chest and shot her mother a sarcastic
thanks-a-lot
look. Kendra smiled back innocently. Massie rolled her eyes. But before her pupils could finish their journey, she was hit with a wave of grape juice that soaked the front of her skirt.

“Ehmagod!” Massie yelled. She pushed away from the table and jumped from her chair.

“Sorry.” Todd shrugged his shoulders. “It was an accident.”

He was fighting a smile and Massie knew he was lying.

“I swear, it's like you were raised by a pack of unbelievably dumb wolves,” she said, dabbing her skirt with a white cloth napkin.

“Massie,” Kendra snapped. She looked at Judi Lyons and shook her head apologetically.

Massie blushed. She realized her comment was more insulting to Todd's parents than to Todd but was too upset to apologize. If anyone should be saying “sorry,” it was
them
. Ever since Labor Day, when the Lyons family left Orlando and moved into the Blocks' guesthouse, Massie's life had pretty much sucked. For the last two months Claire had been forcing herself on Massie. She crashed Massie's carpool, followed her around at school, and even tried to steal Massie's best friends. Lately Todd had been fighting for her attention too. The entire family was cramping her style and Massie was desperate to shake them. She hated that her dad chose to be “old college buddies” with Jay Lyons. Why couldn't he have picked Calvin Klein?

Todd grabbed a napkin and started rubbing Massie's skirt as if he was buffing the hood of a sports car.

“Uchhh. Stay away from me, perv.” Massie slapped his arm.

Massie saw her mother slide the diamond pendant back and forth on the platinum chain around her neck and shoot her husband a stern
do-something
look from across the table.

“Sweetie, relax,” William said to his daughter. “Todd is only trying to help.” His voice was firm and fatherly. “I'll buy you another skirt.”

“But he did it on purpose,” Massie said. “I saw him tilt the pitcher on me.”

Kendra lifted the dainty china bell beside her dinner plate and shook it until Inez, the Blocks' live-in housekeeper, burst through the swinging door.

“Yes, Mrs. Block?” Inez smoothed the apron on her uniform, then cupped her hand around the tight gray bun on the back of her head. She liked everything in its proper place.

Kendra sighed and directed her gaze toward Massie.

Inez took one look at the stain and darted back into the kitchen. She returned with a bottle of seltzer water and a sponge. Massie lifted her arms out to her sides and Inez started scrubbing as hard and fast as her bony arms would allow.

“Todd, did you do that on purpose?” Judi Lyons asked her son. She popped a chocolate-covered strawberry into her tiny mouth and did her best to chew it with her mouth closed.

“Of course he did,” Massie screeched. “He's been staring at me with his big wet cow eyes ever since we sat down.”

“Son, it looks like you're about as charming as your old man.” Jay Lyons smacked his big belly and let out a hearty chuckle.

Todd kissed his fingertips and winked. Everyone laughed except Massie.

“Congratulations, Todd. You finally got me to notice you,” Massie hissed. “What are you going to do tomorrow when I forget about you again? Blowtorch my bedroom?”

Claire took the napkin off her lap and threw it on her plate.

“Well, at least it's just an outfit, right?” Claire said. “It's not like you were hurt or anything.”

“It's not ‘just an outfit,’ Kuh-laiiire.” Massie pinched her skirt. “
This
is
suede.”

“Oh,” Claire said. Then she chuckled to herself.

“I was just thinking how funny it is that, you know, clothes are sooo important to you. That's all.”

“Actually, Claire, I find it ‘funny’ just how UN-important clothes are to
you
. You've worn that poo-colored turtleneck three days
this week
. And for some reason, you think those thick cords are for girls, when they're clearly for gangly dorks.” Massie pointed to Todd. “You know, like your brother.”

Massie moved away from Inez when she noticed how hard the woman was scrubbing. Chunks of yellow sponge had come off on her skirt. Massie was heartbroken. It was the most flattering skirt she had, and now it was destined to become a pillow for her black pug, Bean. She looked directly at Claire as if all of this was her fault.

“Hint, Claire. Next time you order your entire wardrobe from the J. Crew catalog, flip
past
the men's section,” Massie said. “The women's clothes are always in the back.”

“How would
you
know?” Claire said to her cords. “I thought you were
waaay
too fashionable to shop from a
cat-a-log
.” She said “catalog” the same way she'd say “snot sandwich.”

“Hey, whaddaya say we all take a trip to the mall and buy you a new skirt? It'll be fun!” Judi Lyons clapped her pudgy hands and smiled as if she had just announced they were going to start celebrating Christmas five times a year.

Massie chugged her Pellegrino so she wouldn't have to respond to the offer. She couldn't imagine anything worse than having to wear something Judi Lyons picked out. The entire family dressed like tourists—oversized T-shirts, light wash denim, and sensible shoes.