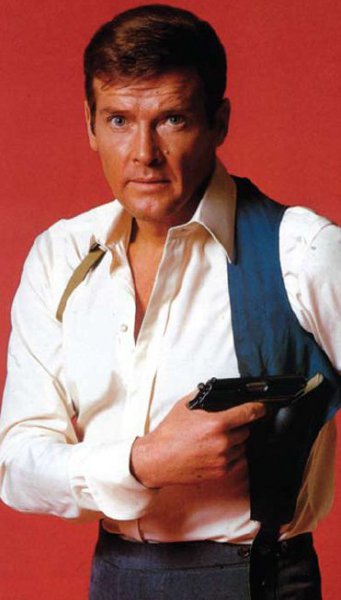 Ready for action in
Live And Let Die
, my first outing as Jimmy Bond.

My friend Peter Hunt directed
On Her Majesty’s Secret Service
and, while very pleased with how it turned out, did confide in me that he’d had many problems with his lead actor’s behaviour; presumably not helped by Harry Saltzman saying, ‘You are now a star, George. Behave like one.’ Stories became legendary of George sending back the studio car in the mornings because he didn’t like the colour, demanding a car to take him the fifty yards from his dressing room to the Pinewood restaurant, and of eating garlic ahead of a love scene.

As had become the tradition, Cubby and Harry invited me to Eon’s HQ in South Audley Street to watch the first screening of
On Her Majesty’s Secret Service
. I guess there were thirty or forty other people there, one being Bob Goldstein, who then headed up 20th Century Fox. He stood up at the end of the film, leaned over to Cubby and said in his gruff voice, ‘You should have killed him and saved the girl!’

In October 1972, I picked up my script, turned to page one and, heeding the advice of The Master, Noël Coward, prepared to ‘learn the lines and don’t bump into the furniture’. I guess I did something right, as, from then until we wrapped on my seventh Bond adventure thirteen years later, people went to see the films and kept me gainfully employed.

When I handed in my licence to kill I was constantly asked who should replace me. No! I lie. I was asked that question after about my third film, which, of course, gives an insecure actor a great feeling of being wanted. In fact, I did make a number of suggestions to Cubby – always names of really bad actors so I looked good by comparison. In the end, I was forced to abandon that idea as I couldn’t find any actors worse than me.

I could write a whole book on Cubby alone. He was a big man in both life and charm. A kind, caring and fun person, Cubby would always listen to ideas and suggestions from any member of the crew – he might not necessarily agree, but he listened – and that was a quality that endeared him to everyone. He was known universally as Cubby, from studio heads to the tea lady. There were no pretentions or nasty sides to Cubby. Sure, he could be tough in business, but his heart was a big one and his loyalty unswerving. 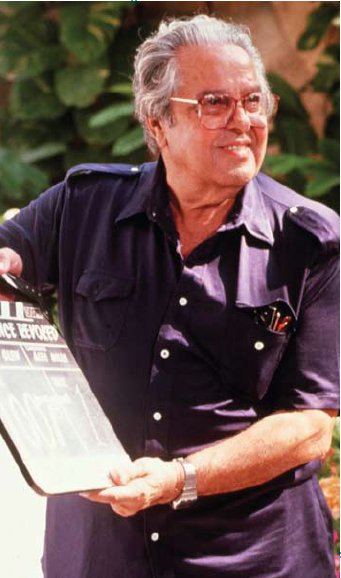 Cubby had read Ian Fleming’s books and thought they would make terrific films, but on enquiring about the rights discovered that a Canadian producer named Harry Saltzman had an option on them, which is how the duo got together in the first place. From there, a production company named Eon was formed, and the rest is history.

Cubby’s enthusiasm for Bond never diminished. He loved making the films, and took great pride in showing every dollar of the budget up on the big screen. But that was never enough for the press: they always asked Cubby if he ever wished he’d won an Oscar.

‘The only award I need is green with Washington’s head on it,’ he replied, referring, of course, to dollar bills at the box office. A successful movie was bigger than any trophy to Cubby. However, in 1982 the issue was addressed by the American Academy, when they bestowed their highest honour – the Irving G. Thalberg Award – on my friend. They asked me to present it to him on the night, and I remember Dana, his wonderful wife, looking rather worried that I might say something silly and fool around on this very prestigious night. Me? Would I?

After
Octopussy
, I resigned myself to thoughts of retirement. There are only so many stunts an ageing actor can tackle, and only so many young girls he can kiss without looking like a perverted grandfather. However, I was persuaded back by Cubby for
A View To A Kill
. A year later and with rumours of a new Bond script being finalized, I decided I really couldn’t go on to an eighth. I sat down with Cubby, who had obviously had similar thoughts, and it really became a mutual decision over lunch that I would step down. There were no tantrums, no attempted negotiations. It was all extremely amicable. 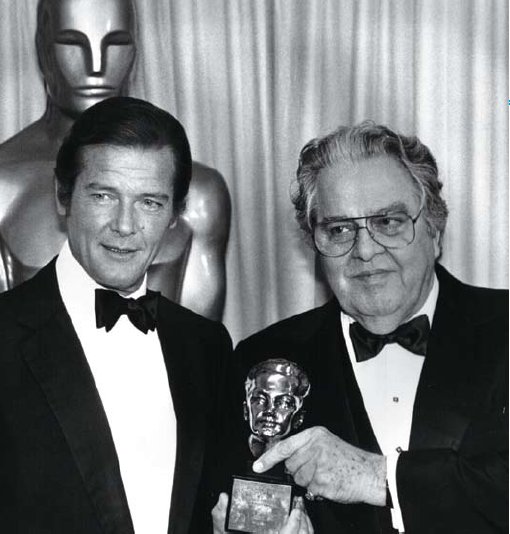 My friendship with Cubby outlived my time as Bond, and he told me of his thoughts of casting Pierce Brosnan in the role of 007. I said it was a terrific idea, as Pierce was an actor not unlike myself in style and looks. When that didn’t quite work out because of contractual complications, Cubby told me he was signing Timothy Dalton for three films, and I wished them both great success.

The next time I met up with Pierce and Timothy was in 1995, at the memorial service for Cubby at London’s Odeon Leicester Square. When I last saw him in California we laughed and joked about the times we’d shared, but, alas, Cubby was suffering ill health and was never able to return to the set of a Bond film, which I know he so looked forward to doing. I miss him greatly. 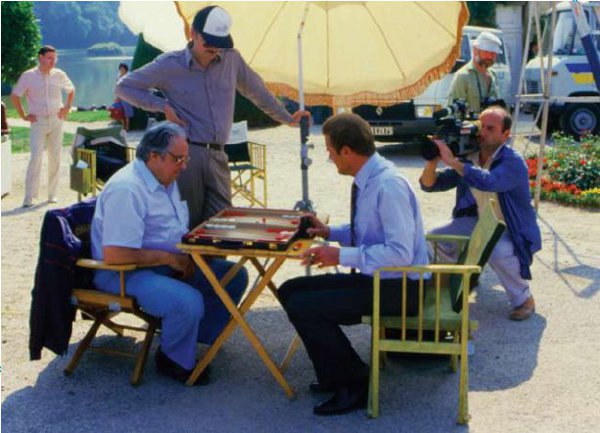 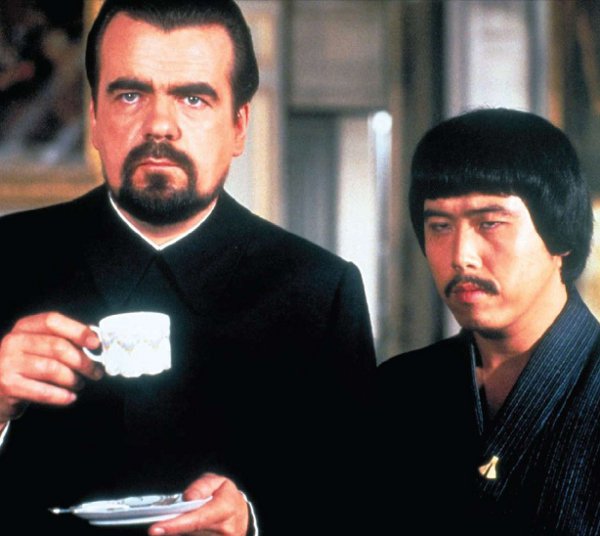 Evil Hugo Drax with manservant Chang in
Moonraker
. Although French, Drax did so enjoy taking afternoon tea in his château.

T
hey’re a jolly bunch of people, all loved by their mothers and all with a sick plan to take over the world or dominate it in one form or another. From the feared head and members of SPECTRE to international drug barons, deadly assassins, warped idealists and terrorists … from the sublime to the ridiculous and back. They are all Bond villains. 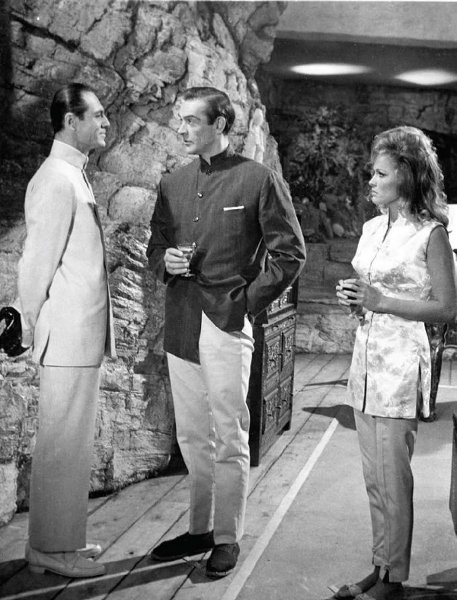 It all started with Dr. No, as played by Joseph Wiseman. I wouldn’t advise you to shake hands with him, as he has cold hands
and
a cold heart.

In truth, I always wanted to play a Bond villain as they invariably have the best dialogue – describing their complex, evil and very sinister schemes to do away with Jimmy Bond – whereas 007 just walks around saying his name and ordering Martinis. The villains aren’t on set every day, either, which means I’d have had a few days off here and there!

THE SPECTRE OF EVIL

In several of the books and early films it is the aforementioned SPECTRE – the
SP
ecial
E
xecutive for
C
ounter-intelligence,
T
errorism,
R
evenge and
E
xtortion – with which Jimmy is most concerned. Its evil head, Ernst Stavro Blofeld, is not aligned to any nation or political ideology, aside from his own unhinged ones. 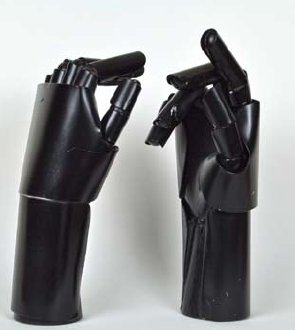 Get a grip, man! Dr. No’s metal hands couldn’t do much to save his slippery descent into hell.

SPECTRE arose from the need to create a politically neutral enemy for Bond. In 1959, with the Cold War at its height, Ian Fleming, Jack Whittingham and Kevin McClory were writing a screenplay on which the novel
Thunderball
was later based. However, Fleming thought that the Cold War could end in the two years it would take to produce the film, which would make the film feel like ‘old news’ even before release. So they decided instead to create SPECTRE, the dastardly twenty-one members of which are drawn from six of the world’s greatest criminal organizations – the Gestapo, the Russian counter-intelligence agency SMERSH, President Tito’s legendary secret police, the Mafia, Corsican hoodlums from the Unione Corse, and a Turkish drug-smuggling operation. 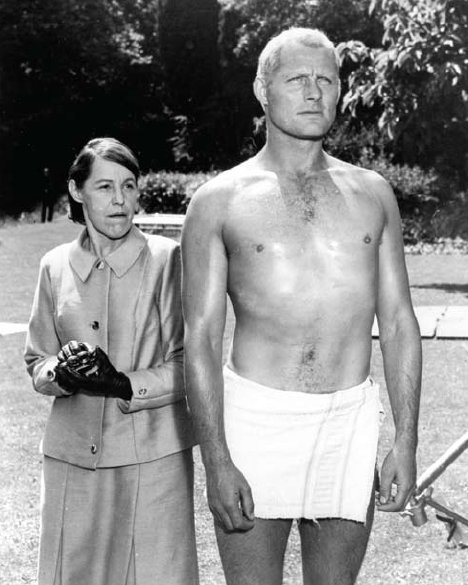 Lotte Lenya (Rosa Klebb) and Robert Shaw (Red Grant) in the Pinewood gardens, which you can see out of my office window.

SPECTRE’s main aim is to spark conflict between the superpowers – the Soviet Union and the United States – in the hope that this conflict will make them vulnerable enough for SPECTRE to snatch their power. In
From Russia With Love
, Blofeld likens SPECTRE’s
modus operandi
to the three Siamese fighting fish he keeps in an aquarium, noting how one fish refrains from attacking the other two until their fight is first concluded. Then, the waiting fish attacks the weakened victor and kills it much more easily.

But it was not all plain sailing for SPECTRE, as it and its characters became the centre of long and bitter litigation between Kevin McClory and Ian Fleming. When plans were abandoned to film the story written by Fleming, McClory and Whittingham, Fleming later published it as the novel
Thunderball
. A court case ensued and, in 1963, Fleming settled out of court with McClory. However, McClory secured the film rights to
Thunderball
, although literary rights remained with Fleming.

After the 1963 settlement, Eon Productions made a separate agreement with McClory to adapt
Thunderball
into the fourth official James Bond film, while stipulating that McClory would not be allowed to make further adaptations for at least ten years – perhaps thinking that by then 007 would have run out of steam? After several failed attempts to re-make
Thunderball
, in 1983 McClory finally succeeded to produce
Never Say Never Again
.

Never one to leave the stage quietly, McClory later contested the filmic ownership of James Bond himself, and threatened to make other 007 films based on earlier script ideas he’d penned. After another court case, in 2001 the UK courts awarded Eon Productions the exclusive film rights to the character James Bond. However, until his death in 2006, McClory continued to claim that SPECTRE and its evil head were his inventions – even launching a legal action when he heard that Karl Stromberg was to be a member of SPECTRE in
The Spy Who Loved Me
. The use of the organization was avoided by Eon from then on.

THE CHANGING FACE OF BLOFELD

Super-villain Blofeld first featured on screen – albeit not in camera shot – in
From Russia With Love
, although identified by name only in the closing credits of the film. Anthony Dawson supplied his body, Eric Pohlmann his voice. The gimmick was repeated in
Thunderball
but when
You Only Live Twice
commenced filming, Jim was to meet Blofeld in person. At last, we were going to see him! 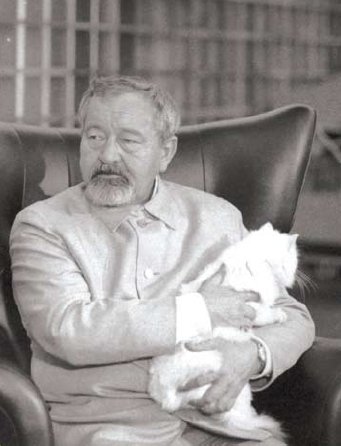 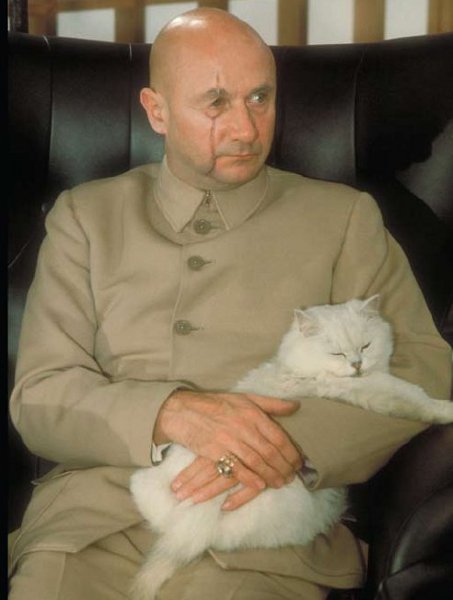 … in favour of the more menacing Donald Pleasence.

Czech actor Jan Werich was cast as SPECTRE’s ‘Number 1’ but both producer Cubby Broccoli and director Lewis Gilbert were anxious when he arrived at Pinewood at the start of the shoot, feeling that Werich resembled a ‘poor, benevolent Santa Claus’ rather than an arch villain. Lewis started filming but within a few days it became apparent that Werich simply wasn’t menacing enough. So they recast the role with Donald Pleasence. 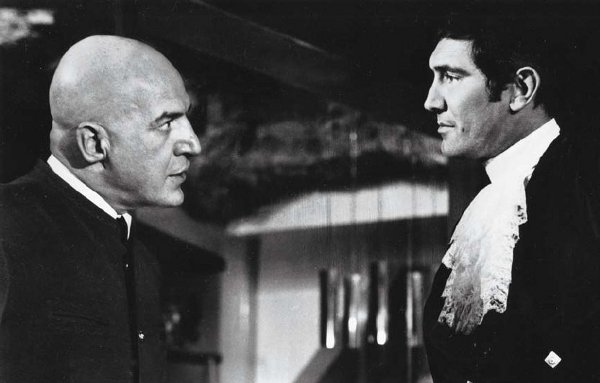 But in
On Her Majesty’s Secret Service
Blofeld had another look, and came in the shape of Telly Savalas.

‘They had already started work on the film,’ Donald Pleasence revealed, ‘and the Blofeld character was still open. They said they wanted me to read the script and create a character totally different to anything that had been done before, and I think we achieved that.’

He experimented for about a week at Pinewood with humps, lame hands and a beard – not all at once, mind you – before it was decided the now-distinctive scar would best convey the character’s almost Himmler-esque quality of villainy (and, as Donald played Himmler on film, that was a good analogy of mine, I reckon). Thus one of the screen’s most memorable villains was born.