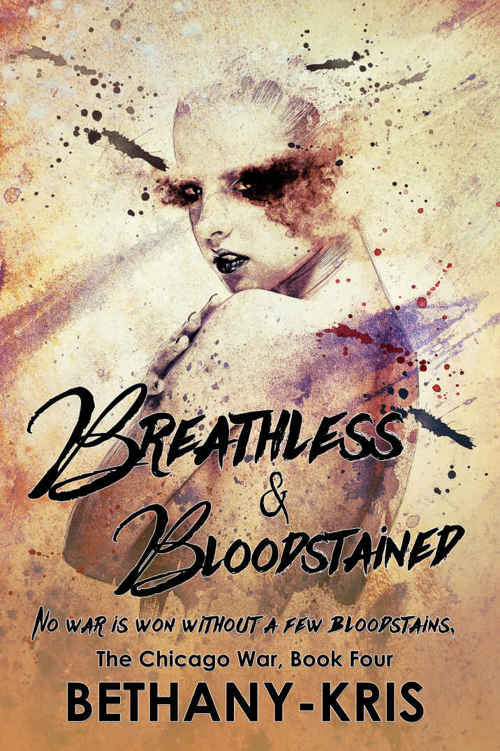 For my hubby. My very own personal Damian,
Adriano, Theo, and Tommas all rolled into one. Love you always, D.

Other Books in
this Series

A
briella Trentini
had been called a lot of things in her life. A
principessa
, a beauty,
stubborn, and difficult. She had been praised for her tenacity, adored for her
place as the oldest granddaughter of the Outfit’s boss, and respected simply
because of her last name.

What she had never
been called was a whore.

“Just like our
mother,” Joel snarled. “A whore, Ella.”

Abriella flinched
as if her brother had reached out and slapped her with his hand instead of his
words. Squeezing Abriella’s arm tighter, Joel dragged her down the dark
hallway. His fingers dug so deeply into her skin that he was going to leave
bruises. With every step they took, she could barely hear the thrum of the club
behind them.

She tried to jerk
out of Joel’s grasp, but he yanked her hard enough to make her stumble. The
short club dress she wore did nothing to protect her knees when she hit the
floor. Joel forced her back on her feet, sneering.

“Stop fighting, or
this will get a hell of a lot worse,” Joel warned.

Abriella sucked in
a hard breath, wanting to stay calm.  For the most part, she followed the rules
set out by her family. Being mafia bred, meant women didn’t get much of a
choice when the men in their lives made calls on certain things.

The women who
fought back lost.

The men of the
Outfit won.

Abriella had too
much stubbornness to go out like that. She’d always been close to her
grandfather. There was no way in hell that Terrance Trentini would stand for
his granddaughter being treated like she was worthless, no matter what she did.
Terrance might have been the boss, but he loved her. He let her get away with
anything, even if that meant he had to hide things for her. Terrance wouldn’t
stand for Joel acting like this.

“I want to call
Granddaddy.”

Joel barked a
bitter laugh. “He’s out of town. Shut up. Don’t make me tell you again.”

Joel kicked open a
door and shoved Abriella inside before she could finish her sentence. Abriella
fixed the skirt of her dress and spun around to face her brother, thinking she
had just made the worst mistake yet. Her brother was angrier than she had realized.
When he took a step toward her in the dark room, Abriella stepped backward.

Her back hit the
edge of a desk, stopping her from moving further away. The room looked like
some kind of office for the club. Joel flicked on a light, illuminating the
space. A leather couch rested along the far wall. Black and white pictures of
Chicago lined the walls in a haphazard fashion. The desk she bumped into was
filled with paperwork, a laptop, and other personal belongings.

She had picked the
wrong club tonight. With the help of high heels, a tight dress, and a fake ID,
Abriella was able to get into just about any club she wanted. Eighteen wasn’t
legal, but her ID said she was twenty-one, and no bouncer would refuse her.

Respirare
was
the newest, hottest club in town. She heard about it through her friends at
college. Abriella checked it out, ended up dancing with a guy who bought her a
few drinks, and then she found herself being shoved down a dark hallway by her
brother. Abriella didn’t even know how Joel found out she was there.

“Christ, look at
you,” her brother spat.

Abriella blinked
away the tears stinging in her eyes. “I didn’t do anything wrong, Joel!”

“Is that what you
think, really? Where I stand, you didn’t do a goddamn thing right. Is that what
you want to be, a fucking whore like our mother?”

“No,” Abriella
said, forcing herself not to cry.

A familiar form
darkened the office doorway behind Joel. Abriella looked away from Tommas Rossi
as he came to stand beside his friend. Tommas had always been respectful to
Abriella when they crossed paths. The Outfit Capo was never rude, but he never
went out of his way to talk to her, either. They were at two different
spectrums in the family.

Joel flipped a
hand at his friend. “Stay out of it.”

Abriella refused
to let her brother see any tears. Joel liked that shit too much. Other people’s
pain was nothing more than amusement for him.

Joel waved
Abriella’s clutch for her to see before he opened it. Digging in the purse, he
pulled out the fake ID. “Where did this come from?”

Joel shoved it
into his pocket. “It’s mine now.”

She would have a
new one in a week.

Joel scoffed.
“You’re an idiot. I told you, he’s out of town. Our parents are gone for the
weekend. I am the only one left watching you.”

“Then I’ll take a
cab back to my dorm.” Abriella shrugged, feeling worse the longer she had to
stay in the room. “You can let Granddaddy know what happened. I’ll deal with
the consequences when he’s back.”

Abriella moved
forward to leave and tried to push past Joel as she went. It was a stupid move.
Joel had a short temper. Before Abriella had blinked, Joel grabbed her arm,
spun her around to face him, and raised his hand. Abriella couldn’t have gotten
out of the way even if she tried to move, but she was too stunned to make the
attempt.

No man had ever
hit her.

Joel’s palm met
Abriella’s cheek with a loud enough crack to take the air from her lungs. The
sting of the hit radiated over her face. Gasping, Abriella stared at her
brother with her mouth open and a hand on her cheek where heat bloomed.

“You …” Abriella
started to say.

She tried to
speak, begged the words to form, but nothing came out. Joel’s hold on her arm
loosened briefly. The two stared at one another for what felt like minutes, but
was probably a few seconds.

Joel released her
fast and let her go. “I-I—”

While Joel
struggled with his own words, Abriella jerked back into reality.

Joel stuttered
stupidly. Abriella rammed her hands into her brother’s chest hard enough to
knock him backward. Shock flitted over Joel’s features as he righted himself.
Abriella shoved him again the second she could, forcing Joel away from her.

She didn’t want
him anywhere near her.

Abriella wasn’t a
dog to be beaten.

She was no man’s
toy.

“Don’t you ever
fucking hit me again!” Abriella screamed at him.

Tommas Rossi
stared between the siblings, but stayed out of it.

Joel swallowed
hard, his shoulders stiffening. “You shouldn’t have—”

“I did nothing,”
Abriella snapped. “Don’t blame your abuse on me. You are a piece of shit, Joel.
Just wait until I tell Granddaddy what you did to me tonight.”

Like someone had
lit a fire under his feet, Joel lurched forward to come at Abriella again.
Tommas Rossi moved faster, sliding in between the siblings and hitting Joel
hard on the shoulder with a closed fist. The smack echoed in the quiet office.
Joel froze on the spot. For the moment, Abriella felt safer.

Tommas’ one word
was deadly quiet. A promise of violence that made Abriella shiver in her heels.

“I said that it is
enough,” Tommas repeated, still quiet but firm. “Leave her be. You have done
more than enough, Joel. She gets it. But I won’t let you touch her again. Try
it, and I’ll physically throw your ass out of this room before I have the
bouncers remove you from this club. Test me, Joel, you know I can fucking do
it.”

“That’s how you
want to play this?” Joel asked.

Tommas nodded
once. “It is.”

“Young, man. She’s
eighteen, trying to have a little fun, and made a goddamn mistake. You made
your point. No more, Joel. It’s
enough
.”

Swallowing hard,
Joel flicked a hand in Abriella’s direction as if to shoo her away like she was
a piece of trash. “If you want to handle the little whore, then handle her.
Make sure she gets back to her dorm. I have better shit to do.”

Joel turned on his
heel and stormed from the office. The pictures on the wall rattled when the
door slammed shut with a bang.

Tommas’ shoulders
heaved. Abriella could practically feel the anger flowing from the man as he
stared at the spot where Joel had vacated.

Her throat was
tight. As fast as her fight had come, it was gone.

Abriella
stiffened, surprised all over again. “I beg your pardon?”

Slowly, Tommas
turned on his heel to face her. “I said hush. It means be quiet.”

Where had the man
from two minutes ago gone to?

Tommas’ brow
furrowed, softening the sharp lines of his features as he grinned.

It wasn’t the
first time Abriella had gotten a good, close-up look at the man, but it was the
first time she took notice of how roguishly handsome Tommas truly was. His easy
stance, tall frame, and broad shoulders that filled his suit perfectly, only
added to the smirk he sported. From his steel-blue gaze, to his strong jaw, and
his dark hair that was swept upward like he’d been running his fingers through
the short strands, the man oozed confidence and …

Abriella blinked,
caught in her daze of staring.

Tommas was sexy as
sin.

She’d always had a
bit of an interest in the quiet Capo of the Rossi family, but Abriella kept her
distance for many reasons. One, because he was a goddamn Capo. Two, because he
was her brother’s friend. And three, because he was eight years older than her.

Abriella willed
away the sudden heat flooding her cheeks and the rest of her body as Tommas
looked her up and down.

“I don’t mind,”
Tommas admitted. “I told you to be quiet, because I don’t want you to thank me
for doing that. Never thank a person for doing what is right, Ella.”

Abriella’s gaze
snapped up to meet Tommas’. He’d never called her anything but her full name
before.