BOOK: Cam Jansen and the Basketball Mystery
>>DOWNLOAD HERE >>READ ONLINE NOW
ads
Two Hamilton Helpers were standing in the hall.
“The party is in the cafeteria,” one of them told Cam and Eric. “It’s at the end of this hall.”
“Did you see anyone walk by with a basketball?” Eric asked. “One is missing.”
“People rushed past us,” one of the helpers said. “We couldn’t see everyone. Ten of them may have had basketballs.”
“Maybe twenty,” the other helper said. “We’re just pointing the way to the party.”
Cam asked, “Is there another way out of the gym?”
“No. The gym door to the parking lot is closed. We want everyone to go to the party.”
“And there’s a guard by the side door,” the other student said. “No one can leave there. That’s where the governor’s car is parked.”
“But what about the Franklin players?” Cam asked. “They went through another door.”
“They went to the locker room to take showers and get dressed. But they can’t leave from there.”
“That’s right,” the other helper said. “Everyone has to walk past us to get to the party. They can leave from the cafeteria.”
“Thank you,” Cam and Eric both said.
They walked ahead and Eric whispered, “Then whoever took the basketball must have gone through the cafeteria.”
Cam and Eric stopped by the entrance to the cafeteria. It was crowded. Most of the people stood by tables. Cake and ice cream and bottles of juice and soda were on the tables. Balloons hung from the ceiling. The walls were decorated with lots of THANKS COACH! signs.
Eric pointed to the far end of the cafeteria and said, “There’s someone standing by the door. She’s wearing an orange Hamilton Helper sash. She’ll know if someone left here with the basketball.”
Cam and Eric slowly walked through the crowded room.
“Did you have some cake?” Donna asked Eric.
“Not now,” he told his sister. “I’m busy.”
Danny’s father was standing by a table near the middle of the room. He was wearing the top of his very tight orange uniform. Danny was in front of him.
“Look at me,” Danny said to Cam and Eric. He had put buttercream icing from the cake under his chin and nose. “I’m Old King Cole!” 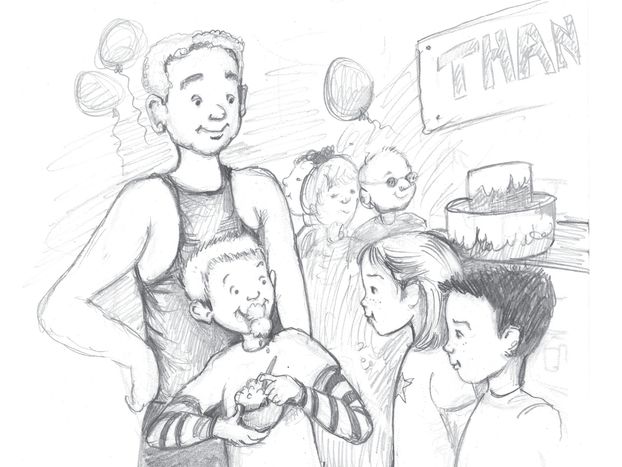 “That’s cute,” Cam said as they squeezed past Danny.
Some Hamilton players were talking with Coach Jenkins and Governor Zellner. The players were still in their uniforms.
Eric whispered, “Look how tall they are.”
Cam and Eric walked past them.
“I feel like I just walked past a redwood forest,” Eric whispered. “And those Hamilton basketball players are the tall redwood trees.”
Eric turned and looked back at the players. He laughed and said, “They got all sweaty playing basketball. Those players are trees who need showers.”
At last, Cam and Eric were by the exit to the parking lot.
Eric asked the helper, “Did anyone leave here carrying a signed basketball?”
“I wouldn’t let anyone leave with that,” she said. “And anyway, no one has left. This party is just getting started.” 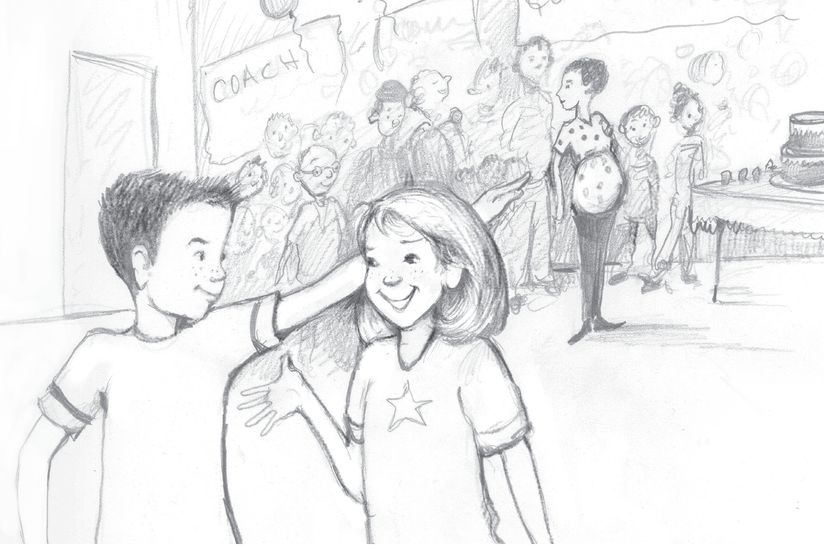 Cam and Eric turned and looked at the crowded cafeteria.
“If no one left,” Eric said, “then someone here must have that ball.”
Cam said, “A basketball is big and round. It’s not easy to hide.”
They looked across the room.
People were holding plates with cake and ice cream. Lots of people were talking with Coach Jenkins. There was a line of people waiting to talk with Governor Zellner.
“Hey,” Eric said. “Look at her. She might be hiding the basketball under her shirt.”
He pointed to a woman with a large round stomach.
Cam laughed. “I think there’s a baby in there. I think she’s pregnant.”
“Oh.”
Then Eric pointed to a bag by one of the tables. Then he shook his head and told Cam, “I almost did it again. I was about to tell you that bag is big enough to hold a basketball. But it’s our bag! It’s got all Howie’s baby stuff.”
Jordan Gold stood on a chair. He held up his hands and called out, “It’s time to let Coach know how much we love him. Let’s all sing ‘For He’s a Jolly Good Fellow.’”
Governor Zellner stood on a chair, too.
The Hamilton team’s best player and the governor waved their arms and led everyone as they sang.
Eric told Cam, “My dad said Coach Jenkins really is a good fellow. My dad loved playing for him.”
When the song was done, people gathered around the coach. They shook his hand. They hugged him.
Eric said, “I really want to find Coach Jenkins’s basketball.”
“So do I,” Cam said. “If it was stolen, then that’s wrong. And anyway, when there’s a mystery, I like to solve it.”
Eric told Cam, “I’m sure you’ll find it.”
Cam looked again across the room. She didn’t see anyone holding a bag or box large enough for a basketball.
Cam shook her head.
“You may be sure,” she told Eric, “but I’m not.”
Chapter Six

“Let’s walk through the room again,” Cam said. “Someone here must be hiding that ball.”
Cam and Eric slowly walked away from the door. Cam looked to the right. Eric looked to the left.
“We were losing by twelve points,” Cam heard one man tell another. “And do you know who led the team to victory? It was Governor Elliot Zellner.”
“I want more cake,” Eric heard a child tell his father. “And I want more juice and more ice cream.”
Cam and Eric were almost by the entrance to the cafeteria. They had looked at everyone. No one had a bag or box big enough to hold a basketball. They stopped and turned. They looked across the room.
The Hamilton players were walking toward them. Eric pinched his nose closed.
“They should really take showers,” Eric whispered.
“Showers,” Cam said. “Of course! Not everyone is at the party. The Franklin players are in the locker room taking showers.”
“Good,” Eric said. “That’s what they should do after a game.”
“But they’re not here,” Cam said. “Maybe one of the Franklin players stole the ball.”
The Hamilton players walked past Cam and Eric. They walked into the hall toward the locker room.
Franklin players were leaving the locker room. They had on regular clothes. They were wearing green and yellow school jackets. Each of them carried a small green canvas bag.
“Hey! What’s in the bags?” Eric asked. 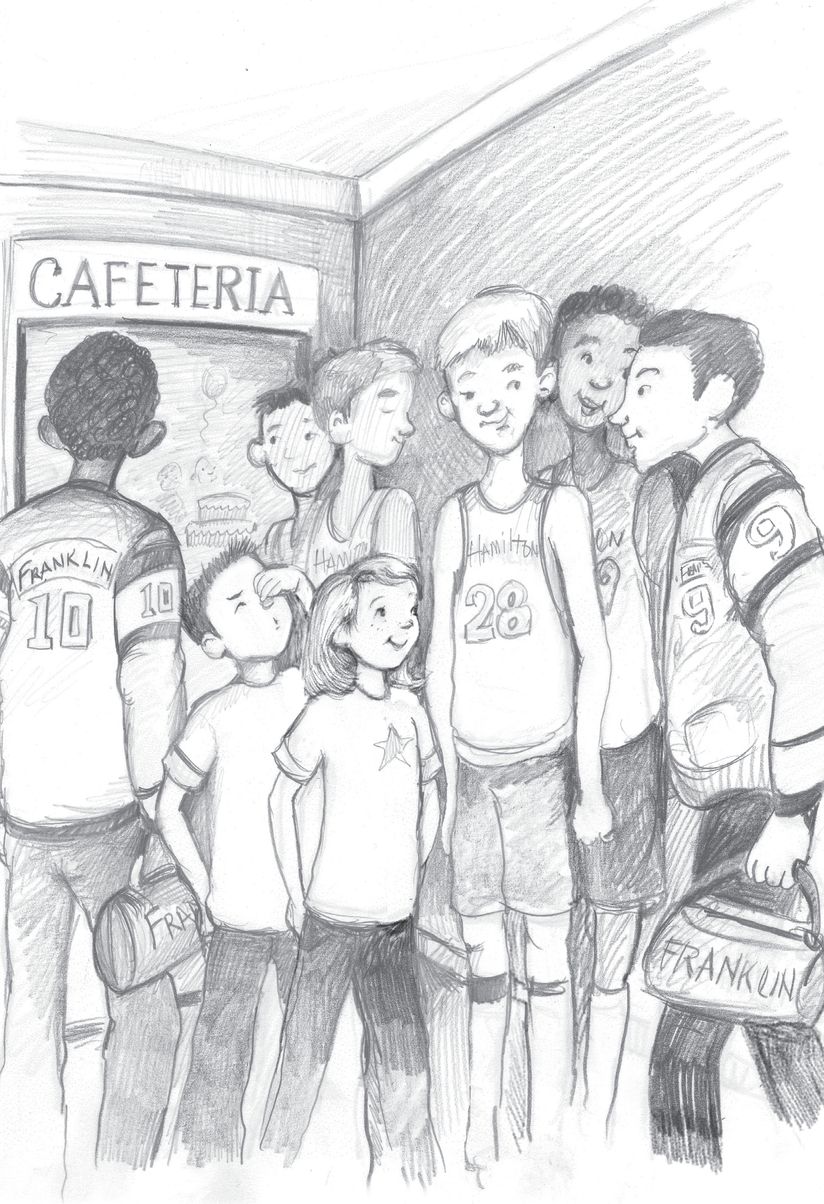 “Their towels and dirty uniforms are in there,” Cam said.
Eric said, “I bet there’s something else in one of those bags. I bet the signed basketball is in one of them.”
“I don’t think so,” Cam said. “Those bags are much too small.”
Cam and Eric followed the Hamilton players.
The players from the two teams met in the middle of the hall.
“Hi,” Jordan Gold said to the Franklin players. “You played a good game.”
“Thanks. How is the party?”
“It’s great,” Jordan Gold answered. “We’re just going to clean up. Then we’re going back. Wait for us.”
Eric poked at one of the canvas bags.
A tall Franklin player looked down at Eric and asked, “What are you doing?”
Eric looked up and said, “I just wondered what basketball players keep in these bags.”
The player laughed. “Dirty clothes,” he said, and unzipped the bag. 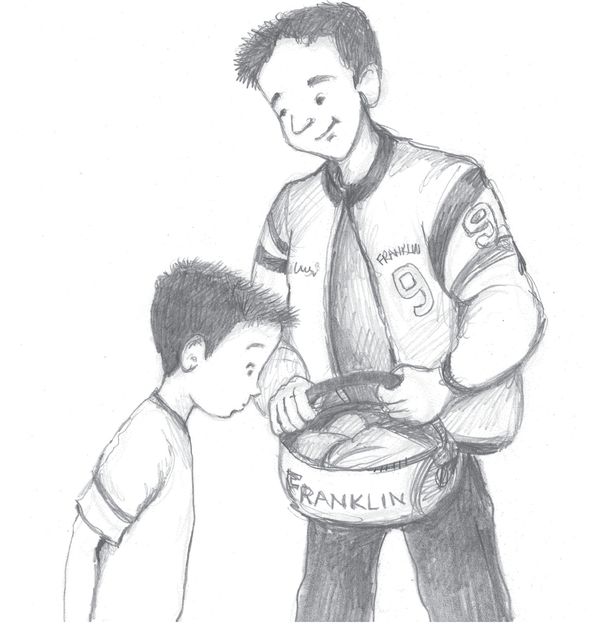 Eric looked in. There was a blue towel in the bag and a green and yellow Franklin uniform.
The players from the two teams talked about the game and Coach Jenkins.
Cam looked at all the gym bags. She was right. They were all much too small to hold a basketball.
“We’ll see you at the party,” Jordan Gold told the Franklin players.
Eric watched Jordan Gold and the other Hamilton players walk toward the locker room. Cam turned and watched the Franklin players walk toward the cafeteria.
“Hey,” Cam whispered. “Look at him.” She pointed to a short boy in a green and yellow Franklin jacket. “I don’t remember him on the court.”
The boy was carrying a small green canvas bag.
Cam closed her eyes. She said,
“Click!”
She said,
“Click!”
again. Then Cam opened her eyes. “I was right,” she said. “He’s not on the team.”
“Then he doesn’t have a dirty uniform,” Eric said. “Why would he have a canvas bag? I bet he didn’t even take a shower.”
Cam and Eric followed the Franklin players into the cafeteria.
“But he can’t have the ball,” Eric whispered. “He’s too thin to be hiding it under his shirt. And that bag is too small.”
“I know,” Cam whispered. “This whole thing is strange. He walked down the hall with the Franklin players, but they never spoke to him. I don’t think they even looked at him. He’s pretending to be with the team, but he’s not.” 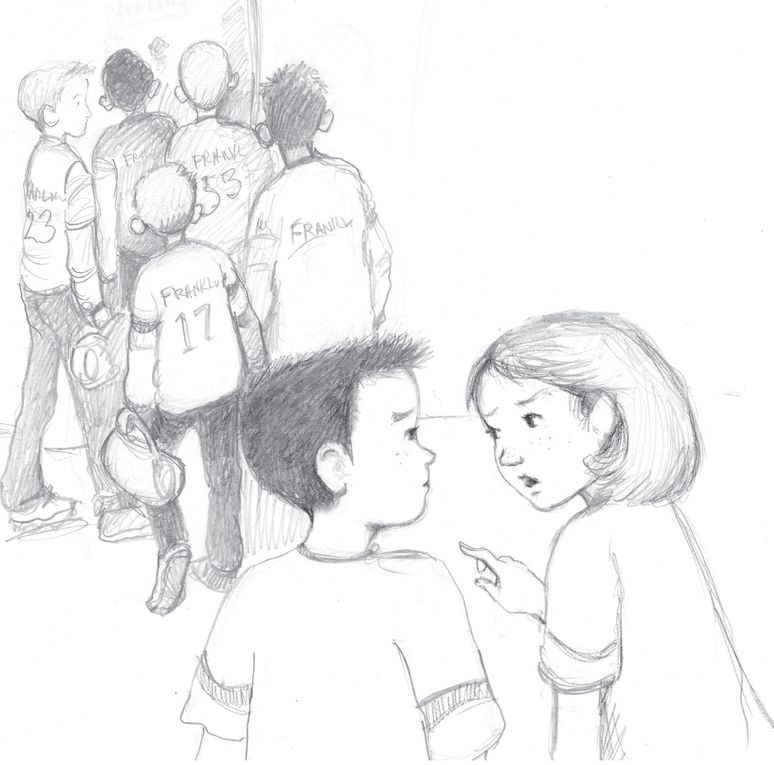