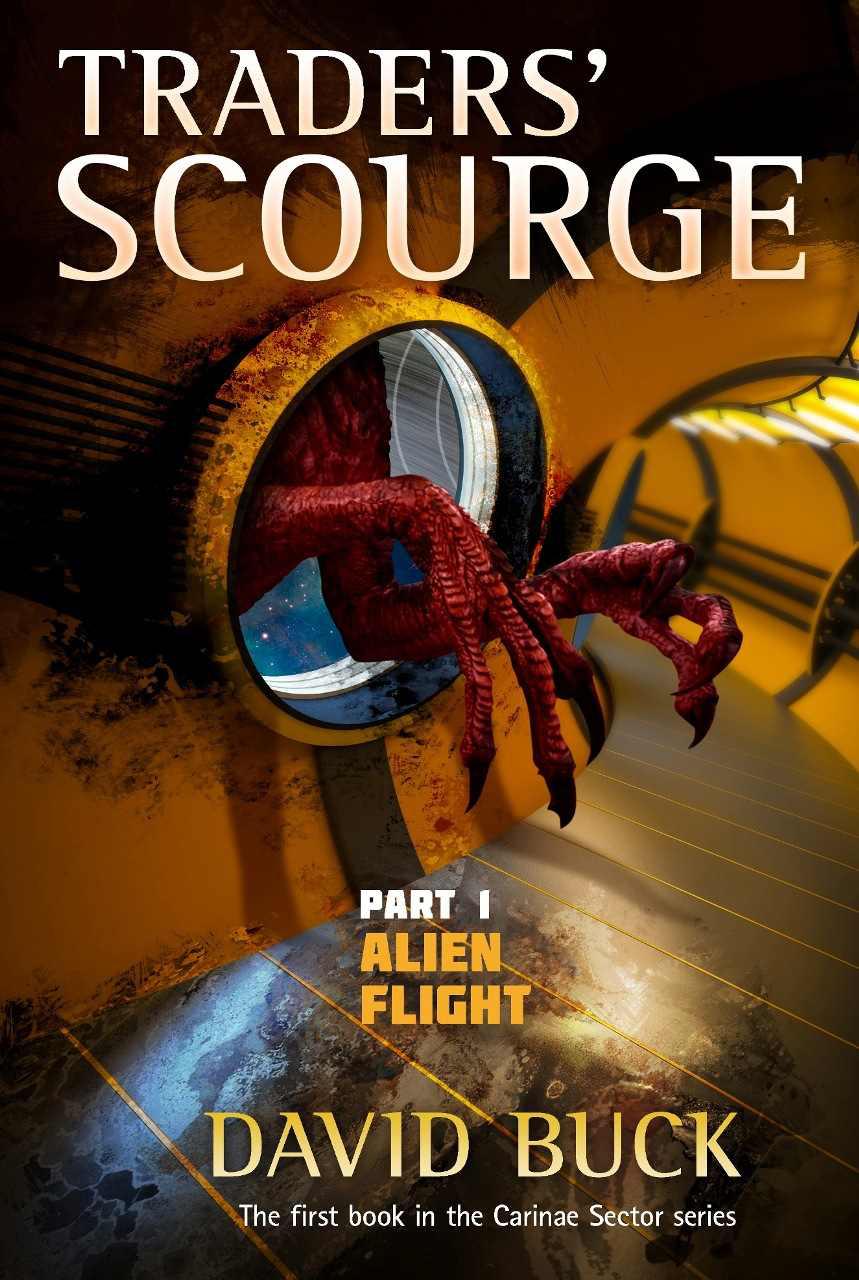 Book One of the Carinae Sector series

The author assumes copyright and all rights relating to this publication. All characters depicted are fictional and the story line is a work of fiction.

The novel is written in Commonwealth English.

This ebook is licensed for your personal enjoyment only. This ebook may not be re-sold or given away to other people. If you would like to share this book with another person, please purchase an additional copy for each recipient. If you’re reading this book and did not purchase it, or it was not purchased for your use only, then please purchase your own copy. Thank you for respecting the hard work of this author.

This novel is dedicated with love to my wife Nicola and our four children.

A special thank you goes to Simon Haynes, Stephen Dedman and Michael Foster.

‘We are all visitors to this time, this place. We are just passing through. Our purpose here is to observe, to learn, to grow, to love... and then we return home.’

‘To move to the intrigue of the vassals is to move to the sunlight of the stars. For getting too close to either can be deadly…’

Trader captain to his students at space academy opening address

The races of the Carinae sector

Queen Angwene, ancient queen hiding on Earth with her daughters

Altarebe, an ancient male hiding with his father

Timeline of human history in the 21
st
Century

2014. Outbreak of another strain of bird flu.

2022. Joint commercial base built on the moon.

2024. Attempted coup by right wing militants in the USA.

For several days the two living ships had fled from the surprise attack across light years of trackless space. Along each ship deep fissures and black scorch marks scarred the hulls, and each ship would shiver as their intelligent systems attempted further limited repairs. The ships were also badly taxed by the repeated jumps needed to elude their attackers, and soon they entered the fourth star system since being attacked.

The two ships felt alarm and surprise as they detected a strange and much larger ship located much further inside the new star system. The alarm gave way to relief after a brief tight beam transmission initiated by the larger alien ship. The message concluded, and if by unspoken agreement, both ships altered course towards a cluster of icy planetoids. As they approached the largest planetoid, the two damaged ships each pulled a twenty G deceleration maneuver, and sank rapidly towards the floor of the deepest craters. Their new ally, a massive silver globe, now rapidly altered course and increased speed, before accelerating across the star system at a widening distance to the two hiding ships.

Now six smaller ships appeared at the opposite side of the star system, and immediately began closing the distant larger ship. On the bridge of one of the smaller ships, a powerful form with poisonous spines slouched in his massive command couch. The Tilmud squadron commander distastefully eyed his crew along his foot long scaled snout, before screaming further commands to his bridge crew in their own acceleration couches.

‘What is that ship doing here? Navigation, chart the reverse course of that ship, I want to know what he was doing here. Sensors, I want any trace you have of those two ships, they could not have gone much further than this immediate stellar area. Tactical give us an overview of the alien ship as we will be in weapons range shortly.’

Days of futile chasing had not improved his generally nasty disposition at all. The bridge crew stiffened at their posts and kept their eyes firmly on their consoles as if to avoid their commanders literally red eyed baleful glare. The tactical officer made a quick assessment of his sensors, before glancing furtively to verify his commander was not armed on this bridge watch. Satisfied and convinced on his course of action, the tactical officer interjected his commander as he started to wind up again about finding the two ships the Tilmud squadron had ambushed previously.

‘Sir, three points to consider. Firstly, the Sspol race is a suspected enemy of the ancients we seek, and would have surely destroyed the two weaker ships if it had encountered them. Secondly, the cruiser is starting to slow down rapidly. Finally, we are badly out-gunned by the heavy weapons of the Sspol cruiser. I recommend a strategic withdrawal.’

White hot anger seethed through Squadron Commander Tanuldesec for a moment as he turned to his console screen. As his anger cooled the commander considered that his squadron had been the hunters for so long that they were starting to get careless in a very unforgiving universe. The commander quickly verified the tactical officer’s summary and ordered all ships to alter course well away from the massive Sspol cruiser.

The commander further choked back his frustration about finding the two earlier ships, and briefly gave his nephew the tactical officer, a small nod of recognition.

‘Lieutenant Giruldesec, how many times are you reminded that bridge protocol means that you don’t interrupt your commander, you will take an extra watch for the next four day period.’

Any other bridge crew could have had his snout around their throat by this time. But the commander owed his older brother for his current squadron command, and the young officer had real potential as witnessed by his latest actions. The lieutenant for his part stoically went about his duties. Tilmud custom and biology meant that two males during even a one sided exchange seldom risked eye contact, so an acknowledgement of the commander was not necessary.

The annoyed commander was frustrated with the governing edicts which forbade their race from performing their law enforcement duties in any vessel bigger than a frigate. The crew kept their eyes firmly on their consoles as the six frigates sprinted out-system away from the silver globe. The squadron commander ranted away yet again about the futility of policing in frigates when the independent races operated heavy cruisers and dreadnoughts.

The two now well hidden ancient males at the planetoid quietly powered down systems to avoid detection and went to sleep. If given enough time their intelligent systems could repair their bodily systems to a flight ready status, even if they would be relatively weak when they awoke. The son considered both the nature of their newer alliances, and with more concern, his father’s status as he drifted into a dreamless slumber.

An ageless but secluded world, just outside the galactic core

The lush foliage of alien orange and green plants surrounding the shaded clearing rustled as strange animals went about their business of life either silently, or in a series or clicks and calls. An orange sun gave soft warm light to the clearing, and an occasional zephyr of breeze further ruffled the verdant foliage. Paying no mind to her surroundings, the dominant life-form silently mused further over new intelligence reports, illegal in origin and content, for the galaxy that had come into her possession. A member of a race that was old when humanity was still in the trees, she patiently instructed one of her on-duty symbiotic males, who then quietly left the clearing for a discrete communications hut nearby.

Knowing of the increase in unrest across the sector caused by the independent races, the ageless one considered wisely the recent decision further. Yes, the events had to unfold just so, and the dispatched message should ensure with increasing probability that this unfolding would occur as it was meant. The on-duty male discretely returned to the edge of the clearing and gave a compliant nod to await her further needs or instructions. The female raised a fore tentacle in request, and another male bowed low and approached with a drink.

The Deltas Vass matriarch rewarded the male for the drink with a call of gratitude, and considered further the knowledge she had received. A feeling of satisfaction now spread through her massive fixed body. For she understood that one way or another the galaxy would be reborn, or even collapse into galactic war, possibly in her own life cycle. One of her other symbiotic males, off-duty and resting against one of her fore-roots, raised his frilled head and trilled a note of happiness as he detected her emotions on the wind. The ageless one absently stroked the frill of the male with a tentacle and trilled back.

‘Soon enough beloved mates, soon enough, there will be a reckoning and the heretics shall be no more.’

For untold thousands of years, the galaxy has been ruled by four powerful alien races living around the star rich galactic core. Peace between the core alien super races is governed by ancient accords and edicts to ensure galactic peace. Each of these overlord galactic races in turn has several vassal or arm races to control their interests and do their bidding.

The Carinae sector takes its name from the massive Carinae star cluster that is approximately 7,500 light years from the solar system towards the centre of the galaxy. The densely packed stellar regions between the galactic centre and the star cluster include the ancient home worlds of the most powerful galactic races in the sector. The galactic race that control the Carinae quadrant are the Zronte Hegemony, an ancient, war-like and cruel reptilian-like species that ascended to supremacy three million years ago. Over many hundreds of thousands of years, the Zronte have both battled other races that would seek to overthrow their authority and mounted offensives on the forbidden machine races.

The vassals of the Zronte in turn run their own agendas, both to survive against the other vassal races, and to seek cautious favor with the god-like overlords themselves. The Zronte themselves are reclusive and unpredictable in their actions with even their vassals races that they have delegated authority for research, law enforcement and trade.

Westward Promises by Zoe Matthews
Kill Me Tomorrow by Richard S. Prather
The Penderwicks at Point Mouette by Jeanne Birdsall
The Tomb of Zeus by Barbara Cleverly
Sisters Grimm 05 Magic and Other Misdemeanors by Michael Buckley
Hope at Dawn by Stacy Henrie
Leaves of Flame by Benjamin Tate
Romulus Buckle and the Luminiferous Aether (The Chronicles of the Pneumatic Zeppelin #3) by Richard Ellis Preston Jr.
Tearing Down the Wall of Sound by Mick Brown
Never Too Far by Abbi Glines