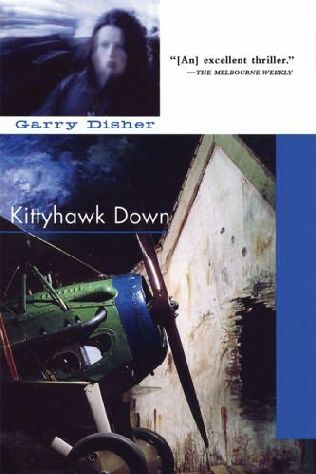 In Australian author Disher's gripping second police procedural (after 2004's
The Dragon Man
), Melbourne homicide detective Hal Challis contends with the pressure of two unsolved murders and his inability to sever all ties with his wife, Angela, who years earlier was convicted of conspiring to have him killed by her lover and remains a suicidal prison inmate. Challis's current relationship with journalist Tessa Kane gets put on hold after his wandering eye fixes on Janet "Kitty" Casement, an aerial photographer. When someone threatens Kitty's life, Challis enlists his team to probe a maze of connections involving a loan shark and a letter-writing crank known as the Meddler. As the story neatly advances from the viewpoints of characters both major and minor, Disher artfully employs misdirection to conceal the identity of the criminal targeting the photographer. Even unsympathetic figures like the Meddler and a lecherous, reactionary police officer come across as three-dimensional. While Disher is not yet in the same league as a Peter Robinson or an Ian Rankin, fans of those authors will find much to like in this dark whodunit.
Agent, Jenny Darling (Australia). (July 6)
Copyright © Reed Business Information, a division of Reed Elsevier Inc. All rights reserved.

Procedural fans looking for something a little different will devour this one. It's the second Detective Inspector Hal Challis mystery (originally published in the author's native Australia), and it finds Challis embroiled in another case involving murder, murder, and more murder. Disher, who has been writing crime novels for almost two decades, has the procedural form down cold, but he adds enough dark overtones to elevate the series into the Ian Rankin league. (Challis' wife, for example, is currently in prison, serving time for being an accessory to attempted murder--the intended victim being Challis himself.) Unlike Rankin's Rebus novels, or any of the other noir-tinged procedurals, the Challis tales do not take place in an urban setting. In Disher's hands, however, the rural Australian backdrop generates plenty of its own menace. Tell procedural devotees to take a break from the familiar American and British mean streets and sample a little noir under the Australian sun.
David Pitt
Copyright © American Library Association. All rights reserved

Kittyhawk Down
By
Garry Disher
Contents

GARRY DISHER lives on the Mornington Peninsula in Victoria A full-time, award-winning writer for many years, he is the author of over forty books for adults and children, including the handbook,
Writing Fiction,
and several internationally renowned novels
The Divine Wind
(winner of the NSW Premier's Ethel Turner Prize),
The Bamboo Flute
(Book of the Year in Australia and the USA) and
The Sunken Road
(shortlisted for the NBC Banjo Award) His most recent adult novel is
Past the Headlands
(2001) Garry Disher's crime fiction includes numerous anthology stories and the Wyatt novels
Kickback
(winner of the German Crime Fiction Critics Prize 2000),
Pay dirt, Deathdeal, Crosskill
and
Port Vila Blues.
The first Detective Inspector Challis murder mystery,
The Dragon Man,
won the German Crime Fiction Critics Prize 2001 and was shortlisted for the Ned Kelly Award for Best Crime Novel.
Kittyhawk Down
is the second book in the series.

I wish to thank the CIB and uniformed officers of the Victoria Police who gave freely of their time when I sought background information for this book. Any deviations from standard police procedure are mine (the notion of a regional homicide inspector, for example).

For Gordon and Pat

The National Parks sign said 'Bushrangers Bay 2.6 km' and 'Cape Schank 5.4 km'. Hal Challis edged through the barrier designed to thwart trail-bikes and stepped out along the track, the bushland warm and some of the flora turning red and yellow on this Easter Saturday afternoon in early autumn.

Autumn. 'Fall', as the Yanks call it.

You couldn't get a better word than 'fall' to describe the season and his life now. Leaves everywhere had begun to fall. Since yesterday, Good Friday, his spirits had fallen, love gone wrong. And he thought of the body falling, falling through the water.

Challis strode on, disturbing a small snake. He was tall, thin but hard-boned, and looked slightly out of date in his jeans, scuffed flying jacket and plain leather shoes. His sunglasses were not an accessory perched above his forehead but shaded his eyes. He'd never worn a T-shirt as an undershirt or tracksuit pants out of doors. He'd never owned a pair of runners. His hair was straight, dark and lifted a little in the wind. It was cut once a month by a young woman who worked beside her father in a Waterloo barbershop. She was skilful and attentive, and for the sum of $10 returned him to the world with a neatly shaped head. And so Challis was outwardly unremarkable that day, nodding with grave courtesy to the people coming toward him along the track. This late on an Easter Saturday, five-thirty pm, couples and families were streaming back to the carpark. Only Challis headed the other way, happy to leave them to the roads of the Peninsula, which would be choked with holidaymakers right now. Very few noticed that he was wound tightly, as if insulating a knot of powerful feelings, and the sunglasses hid the habitually weary, unimpressed and disbelieving cast of his face.

There were better things that Challis could have been doing. He could have been halfway through an Easter walk of the Peninsula beaches with Tessa Kane, but yesterday he'd had to pull out, and that had been the start of his falling spirits. He could have been at home reading or mulching leaves, but early in the afternoon he'd found himself listening for the phone to ring with more bad news from the women's prison, where his wife was serving eight years, and so he'd left the house. He could have been spending time with friends, but they all had children and Easter was a time for family connectedness and strife, and no one wanted a forty-year-old single man hanging around them.

And so he'd started thinking about murder. As the Homicide Squad inspector for the Peninsula, thinking about murder was his job. In fact, there were two murders to think about, both relatively old and both unsolved. The first involved no body, only a strong suspicion. Ten months ago— June last year—a two-year-old toddler named Jasmine Tully had gone missing. She lived with her mother, Lisa, and Lisa's defacto in a rundown fisherman's shack on the outskirts of Waterloo. CIB detectives at Waterloo suspected the defacto,

Bradley Pike. When they had failed to shake Pike's story or turn up evidence of any kind, they'd called in Challis. Challis was inclined to suspect Brad Pike too, and had spent hours trying to break his story. Cases involving children were the worst. He hated them. They left him feeling scoured and futile.

But it was the second murder that had brought Challis to Bushrangers Bay.

That, and love. If Tessa Kane was sticking to the timetable they'd mapped out with each other, she'd be walking in from Cape Schank about now. Maybe he'd encounter her. Maybe she'd want to talk.

It had been found by a commercial fisherman from Flinders about six months ago. He was pulling in his anchor and noticed how heavy it was. He kept hauling, and that's when he saw the second anchor, caught in the tines of his own. But that alone hadn't accounted for the extra weight. Attached to the second anchor—belted on, in fact, so you could be sure it wasn't accidental—was a body.

The fisherman used his mobile phone to call the police, and bobbed in the sea off Bushrangers Bay for an hour until a police launch arrived to take charge.

No one knew who the dead man was. Challis saw the body before the pathologist had started sawing at it. The flesh was soupy, bloated, chewed about, apt to fall away from the bones like a cooked chicken's. Only the finger-pads of the right thumb and forefinger remained intact, the tips badly softened and wrinkled, but by injecting fluid under the skin the lab had distended them sufficiently to make serviceable fingerprints. No matches with the national computer. Then, when it was suggested that the dental work was foreign, Challis had tried Interpol, the Home Office National Computer in the UK, and the FBI.

The clothing—jeans, T-shirt, underwear and Nike running shoes—had been made in Asian sweatshops for sale in Australian stores. They were a dime a dozen.

All that Challis knew was, the guy was in his thirties and his skull had been smashed in before he'd been thrown into the water. There were also stab wounds to the stomach, but the cause of death was drowning, the pathologist said, noting the presence of a large volume of seawater in the lungs. The blow to the head? Possibly to stun the victim. The stab wounds? Probably to release gases and so ensure that the body remained under the surface of the water.