‘What’s going on in here?’ Lady Clarissa flicked on the library lights. ‘Aunt Violet! What on earth?’

Digby Pertwhistle hadn’t been able to sleep either and was on his way to the kitchen to make a cup of cocoa when he heard the kerfuffle.

‘Is that you, Violet?’ he asked, squinting at the old woman in her nightgown.

Violet tried to hide whatever it was she was holding behind her back.

But Clementine handed her mother the picture that was coming to life in front of them.

‘Is that . . .’ Clarissa hesitated, peering at the image. ‘Is that the Appleby tiara?’ She handed the photograph to Digby Pertwhistle.

‘Oh, my dear, I think it is. That tiara and the matching necklace and earrings have been missing for years. Your mother always thought the set had been stolen. You know it’s worth a fortune.’

‘Is that the tiara Granny’s wearing in the portrait?’ Clementine asked her mother. ‘The one with all the sparkles?’ She turned to her great-aunt. ‘This morning when you were coming out of my room, Aunt Violet, I saw something twinkly in your hand and then you put it in your pocket. What was that?’

‘It was none of your business,’ the old woman replied.

‘Aunt Violet, please don’t speak to Clementine like that. What else did you find?’

‘We’ll deal with those later. May I have the tiara, please?’ Clarissa asked.

Digby frowned at her and shook his head softly. ‘I think you’ll find it belongs to Clarissa.’

‘Everything belongs to Clarissa,’ Violet yelled. ‘The house, the furniture, the china. But this is mine. And so are the earrings and the necklace. I found them when I was little and I hid them in different places in the house. I forgot about them until I was packing up the flat and found an old photograph of Mother wearing them. I couldn’t think where the tiara was and then yesterday when I saw that the cabinet was gone, I remembered. You’re not having it. I, I, I need it.’ Violet’s lip trembled and it looked as if she was going to cry.

‘Aunt Violet, why don’t you give it to me and I’ll put it somewhere safe and we can talk about it in the morning,’ Clarissa said soothingly.

‘No!’ The woman shuddered. ‘You don’t know what it’s like. I haven’t got any money left. None at all.’ Violet began to wail. ‘I don’t even have anywhere to live!’

‘I know,’ Clarissa said, as she and Digby exchanged glances.

‘It’s all right, Aunt Violet,’ said Clementine. ‘We don’t have any money either. And we have plenty of space. You could stay here with us if you like. But you can’t have my bedroom,’ she added. ‘Grandpa said so. And you should try to be a bit kinder, like Mummy said you used to be.’

Violet was cornered. She jammed the tiara on top of Clementine’s head and stomped past Clarissa.

‘But I’m keeping the earrings, and the necklace too if I can remember where it is,’ she said as she turned and stared at the group. Then she fled upstairs to her room.

‘Why is Aunt Violet so mad?’ Clementine asked her mother.

Clementine lifted the tiara from her head and stared at the sparkling jewels. ‘It’s lovely, Mummy.’

‘Yes it is, Clemmie,’ her mother replied. ‘And I’m going to put it away in a very safe place.’ She strode to the opposite end of the bookshelf, reached up, and rested her hand on the spine of one of the books. The shelf spun around, revealing a safe buried in the wall.

‘It’s okay, Lady Clarissa, we’re on safari,’ Jules declared. ‘Nothing can get past the wildlife photographers.’

Lady Clarissa spun the dial and swivelled the books back into place. ‘All right, off to sleep everyone,’ she instructed, ‘or you’ll never get up in the morning.’

Clementine kissed her mother goodnight and climbed back under the desk. Sophie followed her and Jules disappeared into his tent.

‘Would you like to join me for some cocoa, dear?’ Digby asked.

‘That would be lovely, thank you,’ Clarissa replied wearily. 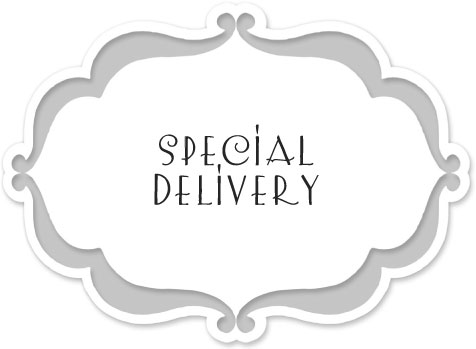 T
he next morning the storm had blown away and the sky was a dazzling shade of blue. Clementine, Sophie and Jules slept in until Lavender told them it was time to get up. She made the rounds, pressing her little snout onto the sides of their faces until they stirred.

In the kitchen, Digby Pertwhistle was making tea.

‘She’s upstairs talking to Aunt Violet,’ the old man said. ‘Did you enjoy your safari?’

‘It was exciting,’ said Clementine, beaming. ‘We saw some strange creatures.’

Jules placed three photographs down on the table. He spread them out. Digby laughed.

‘Just as well that pig of yours is patient,’ he said, marvelling at the pictures. There was Lavender with elephant ears, Lavender with a monkey mask and Lavender wearing a tutu.

‘That’s a rather unusual animal to find on an African safari,’ said Digby, pointing at the one of Lavender in the tutu.

‘I’ll get it,’ Clemmie yelled and raced out of the kitchen. She almost ran into Aunt Violet and her mother as they reached the bottom of the stairs.

‘Good heavens, young lady, you might have killed us,’ said Violet, a scowl creasing her face.

‘Yes, well, I can’t say the same for you at the moment.’ The old woman shook her head.

Clarissa opened the front door and Clementine skipped across the giant entrance hall to see who was there. A man in a uniform handed her mother an envelope.

Clarissa scribbled her signature and thanked the fellow, then closed the door.

‘What is it, Mummy?’ Clementine asked.

‘I don’t know, but I think we should open it together in the kitchen,’ Clarissa smiled.

Violet was standing at the bottom of the stairs looking up at the portraits on the wall.

Clementine stopped and followed her gaze. ‘You were lovely.’

‘Do you want to have some breakfast?’ Clementine held out her hand to Aunt Violet.

‘Oh, for heaven’s sake, I’m perfectly capable of finding my own way to the kitchen – which is where I
presume
we’ll be eating, seeing that the dining room is reserved for paying guests,’ Violet snapped.

Clementine’s lip began to tremble. The old woman caught sight of her and sighed.

‘Oh, all right. Come along, Clementine, if it makes you feel better, you can show me the way.’

The old woman reached down and slipped her hand into Clemmie’s. There was a spark of electricity between them. ‘Oh!’ they both gasped in unison. Clemmie giggled and looked up at her great-aunt. She stared at her face, past the wrinkles and the frown lines.

‘You know, Aunt Violet, it’s funny but we have exactly the same colour eyes, you and me.’

Violet gazed at the child. Her brow furrowed and just for a moment she remembered herself as a young girl and thought she could have been looking into a mirror.

‘Well, of course, I am your grandfather’s sister, Clementine,’ Violet replied. The old woman looked up and caught her niece’s gaze. ‘Isn’t that right, Clarissa?’ she said.

‘After breakfast you’ll have to find Pharaoh for me. He got out last night and he could be anywhere,’ Violet informed them.

Clementine gulped. She didn’t like the thought of the sphynx lurking about the house.

As Clementine and Aunt Violet followed Clarissa into the kitchen they found Digby, Sophie and Jules huddled together by the back door.

‘What
is
it?’ Sophie asked, in a confused voice.

‘I think it must be that giant rat Clementine was talking about,’ Jules whispered. 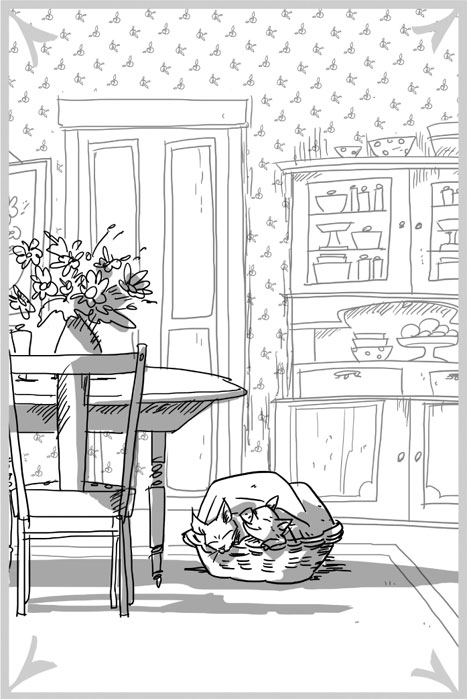 ‘Did you say rat?’ Aunt Violet strode towards the group. ‘That’s not a rat, that’s my baby.’ She stared into the basket and her eyes grew as round as dinner plates. ‘Oh, Pharaoh! How could you?’ Violet clasped her hand to her mouth.

There in the basket, Pharaoh and Lavender were fast asleep. Pharaoh had his paw resting on Lavender’s tummy and he was purring like a diesel engine.

‘Maybe Pharaoh thinks he’s a pig,’ Jules said. ‘They kind of look the same – except Lavender’s much prettier.’

‘Come and sit down, Aunt Violet, and I’ll pour you a cup of tea,’ said Clarissa, rolling her eyes at her aunt’s theatrics.

‘Toast’s up,’ Digby Pertwhistle called. The children raced back to the kitchen table.

‘What did the man deliver?’ Clementine asked her mother, pointing at the envelope that was sitting on the table.

‘Oh, I’d almost forgotten about that.’ Her mother sat down and picked it up. She ran her finger under the flap and pulled out a letter, which she read aloud.
‘Dear Lady Appleby, it is my pleasure to inform you that you are the winner of the Cunard’s Coast to Coast Competition.’
Clarissa scanned ahead silently.

‘But what did you win, Mummy?’ said Clementine, fizzing with excitement.

Sophie looked on beside her friend, and Jules raced over to stand behind Clarissa and read over her shoulder.

‘Goodness! It’s a cruise. On board the Queen Mary 2, all the way around the world. It’s for three whole months!’ Clarissa exclaimed. ‘I can’t go, of course. What about you, Digby?’

The old man pursed his lips and shook his head. ‘Couldn’t possibly leave you and the little one for that long.’

‘I would get seasick,’ Jules piped up.

Aunt Violet was on the edge of her seat. ‘The Queen Mary 2, you say? When I was a young woman I sailed on the original Queen Mary,’ she said. ‘With your father and our parents, actually. It was one of the happiest times we ever had as a family.’

Clementine skipped around to the end of the table and pulled on her mother’s arm. She whispered something in her ear.

‘Aunt Violet,’ said Clementine happily, ‘would you like to go on a long holiday?’

Violet frowned and looked from Clementine to her niece. ‘Really? You’d do that for me, Clarissa?’

Clarissa nodded and handed Clementine the letter, which she took around to her great-aunt.

‘That’s . . . that’s very kind.’ Aunt Violet wiped her hand across the corner of her eye.

Clementine smiled at her mother and then at Uncle Digby. He gave her a knowing wink.

‘But you can wipe those silly smiles off your faces. Three months is not forever, you know.’ Violet sniffed and straightened her shoulders. ‘Just you wait and see. I’ll be back.’ 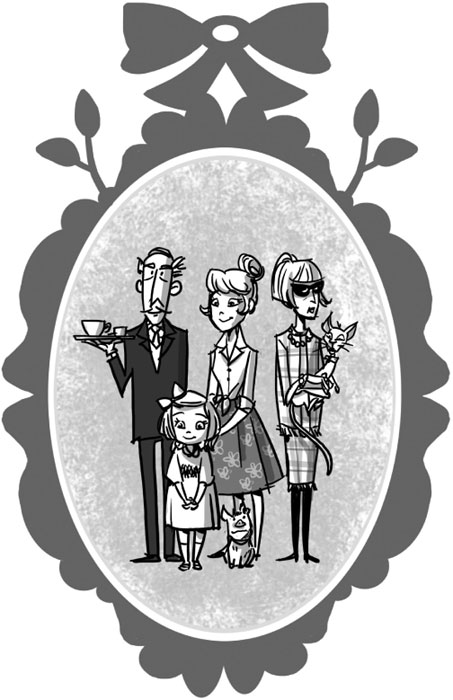