Confessions of a Reluctant Recessionista 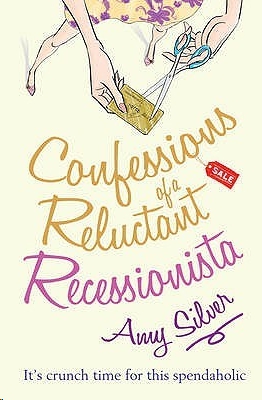 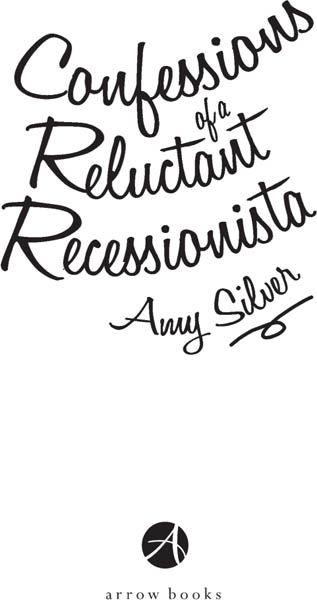 Amy Silver has asserted her right under the Copyright, Designs and Patents Act 1988 to be identified as the author of this work.

This book is a work of fiction. Names and characters are the product of the author’s imagination and any resemblance to actual persons, living or dead, is entirely coincidental.

This book is sold subject to the condition that it shall not, by way of trade or otherwise, be lent, resold, hired out, or otherwise circulated without the publisher’s prior consent in any form of binding or cover other than that in which it is published and without a similar condition, including this condition, being imposed on the subsequent purchaser.

Addresses for companies within The Random House Group Limited can be found at:

The Random House Group Limited supports The Forest Stewardship Council (FSC), the leading international forest certification organisation. All our titles that are printed on Greenpeace approved FSC certified paper carry the FSC logo. Our paper procurement policy can be found at
www.rbooks.co.uk/environment 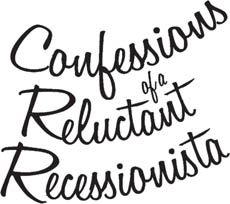 Amy Silver is a writer and freelance journalist, and has written on everything from the diamond trade to DIY dog grooming. She lives in London and has a penchant for vintage clothes and champagne cocktails, but she always pays her credit card bills on time. This is her first novel.

God, they’re beautiful. They are quite possibly the most beautiful shoes I have ever seen in my entire life. Last night, after I’d come home and tried them on with just about everything in my entire wardrobe (there is nothing they don’t look good with), I put them on the coffee table in the middle of the living room and just sat there, looking at them. They were still sitting there when Ali arrived.

‘Bad luck,’ was the first thing she said when she came into the room.

‘Shoes on the table,’ she said, knocking them to the floor.

‘Jealous, my arse. You won’t be able to walk fifty yards in those things. They’ll cripple you.’

‘They’re taxi shoes, Al. I don’t intend to walk fifty yards in them. It’s just taxi to bar, bar to taxi, taxi to
front door. That’s about thirty yards max over the course of an entire evening. Anyway, Dan can always carry me . . .’

Ali slumped down onto the sofa, stretching out her legs and kicking off her own rather elegant heels.

‘You’re right, you cow. You are lucky, having someone to spoil you, even if he is constantly admiring his own assets. I
am
jealous. Some days I feel like no one would notice if I turned up at the pub barefoot.’ This is not true. At five nine with a pair of legs to make Gwyneth Paltrow turn green with envy, Ali never passes unnoticed. She’s just so used to being one of the boys, which is virtually a job requirement when you do what she does, that she sometimes forgets the impact she makes on the opposite sex.

‘You had a long day?’ I asked, handing her a glass of champagne.

‘The longest. Had to get up at quarter to five in order to get a decent run in before I left for work, got stuck on the Northern Line for twenty minutes on the way in, which meant I missed half the morning meeting, got bollocked by Nicholas, had endless calls with impossible-to-please clients, no time for lunch, no time to pee . . .’

Ali and I met at Hamilton Churchill, the investment bank where we work. She’s the high-powered one – she’s a trader – and I’m just a lowly PA, but I know whose job I’d rather have. My boss might be a complete pain in the arse, but I don’t have to be at work at six thirty every morning, I don’t have to spend all day
yelling into a phone, I don’t have the responsibility of buying and selling millions of pounds’ worth of stock, of trying to call the market, to sort the good tips from the bad, trying to please my clients while also pleasing my bosses. Granted, I don’t earn a six-figure bonus either, but I get by. Plus, I am fortunate to have a boyfriend, Dan, who is also a trader – and in addition to being extremely attractive he’s also very generous, hence the Louboutins.

Generous as he is, I have to admit that the shoes came as a bit of a surprise. It wasn’t as if it was my birthday, or an anniversary or even Valentine’s Day – just a plain old Wednesday in October. We went out to dinner and when we got back to his flat, there they were, all wrapped up with a crimson bow, sitting in the middle of the bed. My friends won’t believe it, but he can be very romantic.

Ali and I were having a girls’ night in – Dan was out with clients – so we bought three bottles of champagne (Ali can put them away when she’s in the mood) and ordered takeaway. Not that I was really in the mood for food. I was much too hyper, and not just about the shoes: it was only two days to go until possibly the sternest test of my professional career—the night of the annual Hamilton Churchill drinks party which I, to my amazement, had been tasked with organising. To be perfectly honest, I was slightly terrified. My boss, Nicholas, is almost impossible to please at the best of times – and I had gone ever so slightly over budget. But you don’t get the bar at the Hempel hotel, all the
champagne that a room full of investors and traders can drink, and canapés from the trendiest caterers in town, for nothing.

‘It’ll be great, Cass,’ Ali reassured me, draining her glass and getting up to open another bottle. ‘You were born to plan parties. Just as I was born to go to them, drink too much and go home with someone completely inappropriate.’

‘Any potential candidates for Mr Inappropriate this year?’ I asked, but before she could answer we heard the key rattle in the front door.

‘Oh, hell,’ Ali hissed, rolling her eyes dramatically. ‘I thought she was out for the night.’

‘So did I,’ I whispered back, shrugging guiltily.

Ali can’t stand my flatmate Jude to whom she holds a diametrically opposed world view. Ali is a pure capitalist, she believes in the power of the market and the virtue of hard work. She’s working class – her father is an ex-printer turned cab driver, her mum was a nurse until she died a few years ago – and pulled herself up by the bootstraps, worked incredibly hard at her crappy East London comprehensive and ended up doing maths at Cambridge.

Jude, by contrast, is upper middle class, had a pony for a best friend between the ages of eight and eighteen and politically stands a few paces to the left of Karl Marx. As far as Ali is concerned, every thing Jude owns has been handed to her, largely courtesy of her father’s extremely successful architecture practice. It drives Ali insane that despite all her privileges, Jude still behaves
as though she spends every day struggling against injustice.

Jude, of course, thinks Ali is materialistic and selfish, motivated solely by making money without any concerns about where that money comes from. If only she could see the error of her ways, Jude says, Ali could use her numerous talents to make the world a better place. Personally, I try to stay out of it.

‘Hi, guys,’ Jude said, popping her head round the door and smiling at us sweetly. ‘Oh, champagne! Are you celebrating something?’

‘We’re celebrating the fact that it’s Thursday,’ Ali said drily. ‘D’you want some, or would a glass of Laurent Perrier contravene some principle or other?’

‘Oh, I can’t, thanks very much, just came home to change and then I’m off to yoga.’

Jude is pretty good at ignoring Ali’s barbs – a committed pacifist, she believes in turning the other cheek. Then she spotted my shoes, still lying on the rug where Ali had dumped them so unceremoniously.

‘Oooh, those are pretty,’ she chirped, picking one up and surveying the glorious red sole.

‘Five hundred pounds!’ Jude exclaimed. ‘For shoes! Honestly, Cass, that’s ridiculous. You could feed a family in Africa for months on that. Hell, in some places you could probably feed a family for a year.’

Ali poured herself another glass of champagne and settled back into the sofa cushions, enjoying a ringside seat to my dressing down.