Read Conscience of a Conservative Online

Conscience of a Conservative 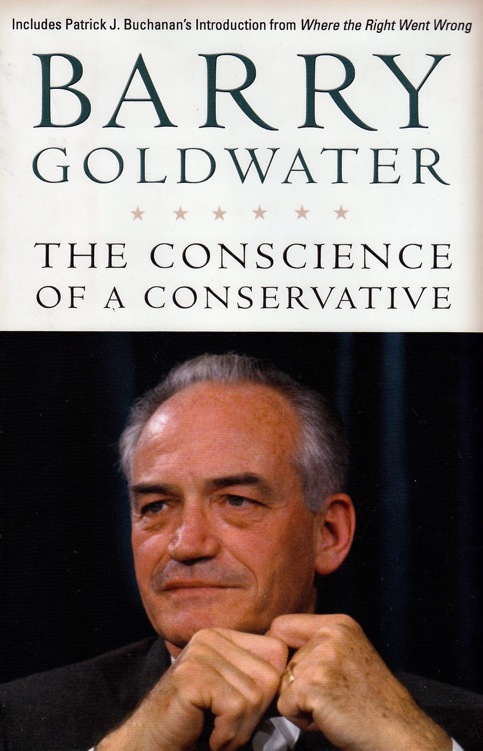 The Conscience of a Conservative
is Barry Goldwater's classic which re-ignited the American conservative movement and made him a political star. The term "Goldwater conservative" became a household word. The book has influenced countless conservatives in the United States, helping to lay the foundation for the Reagan Revolution.

The book lays out, clearly and succinctly, [Goldwater's] uncompromising views. Goldwater held freedom as the highest value in American society: freedom from law, freedom from government, freedom from anybody else's vision but your own. You can argue with him on the particulars, but there's something compelling about his quintessentially American notion of self-reliance. (David Ulin
Los Angeles Times
)

Praise for the original edition: "Goldwater's conservatism is not isolationism, nor is it a cold-blooded commitment to the 'haves' as against the 'have-nots.' It is the creed of a fighter who has both a warm heart and a clear mind. (John Chamberlain
Wall Street Journal
)

Praise for the original edition: "There is more harsh fact and hard sense in this slight book than will emerge from all of the chatter of this year's session of Congress. . . . Sen. Goldwater is one of a handful of authentic conservatives. . . . [H]e has the clarity of courage and the courage of clarity. (George Morgenstern
Chicago Tribune
)

It is good that C.C. Goldwater brings us this new edition. It directs new attention to a political figure who, though fiery, was never mean-spirited or unfairly partisan. (Max J. Skidmore
European Legacy
)

With a New Introduction by Patrick J. Buchanan.

Here is the path-breaking book that rocketed a political philosophy into the forefront of the nation's consciousness, written in words whose vigor and relevance have not tarnished with age:

I have little interest in streamlining government or in making it more efficient, for I mean to reduce its size. I do not undertake to promote welfare, for I propose to extend freedom. My aim is not pass laws, but to repeal them. it is not to inaugurate new programs, but to cancel old ones that do violence to the Constitution, or that have failed in their purpose, or that impose on the people an unwarranted financial burden. I will not attempt to discover whether legislation is "needed" before I have first determined whether it is constitutionally permissible. And if I should later be attacked for neglecting my constituents' "interests," I shall replay that I was informed their main interest is liberty and that in that cause I am dong the very best I can. 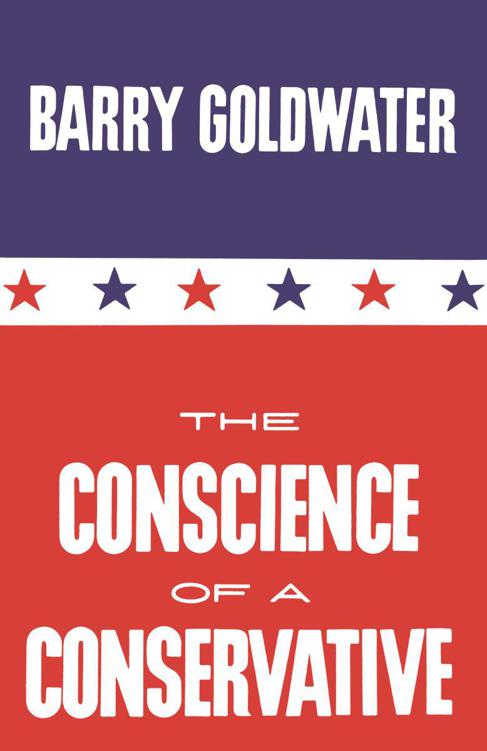 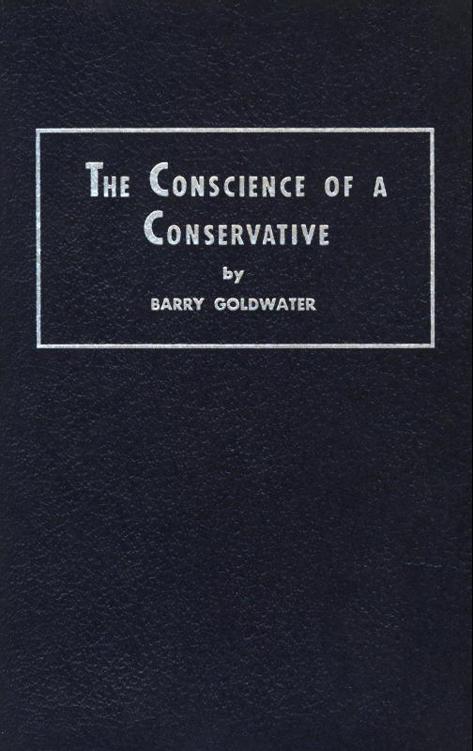 From the dust jacket front flap:

"There is more harsh fact and hard sense in this slight book than will emerge from all of the chatter of this year's session of Congress, this year's campaign for the Presidency and all other offices ... Whereas the rest of the tribe of professional politicians keep a respectful distance in beating about the bush of truth, Barry Goldwater, the Republican Senator from Arizona, is not afraid to pluck it up by the roots."—George Morgenstern—
Chicago Sunday Tribune

THE CONSCIENCE OF A CONSERVATIVE is sensational public revelation of that which is seldom if ever disclosed namely, the heartfelt convictions of a Washington politician.

Senator Barry Goldwater is not the only member of Congress who holds these truths but he is the only person in high public office who has frankly and publicly put all these truths together into a complete and cogent program of foreign and domestic policy.

This supremely sensible and eminently courageous book will shock orthodox politicians as much as it will gratify millions of Americans who are sick and tired of political contests between meaningless equivocations and undifferentiated distinctions.

The revealed conscience of this distinguished and singularly successful political Conservative will shed helpful light on the fabrication of both political platforms.

More important than that is the clear warning this book sounds about impending dangers to the survival of American freedom and the action it recommends to avoid these dangers.

EVERY AMERICAN WHO LOVES HIS COUNTRY SHOULD READ THIS BOOK.

From the dust jacket back flap:

FROM THE CONSCIENCE OF A CONSERVATIVE

A tolerable peace must
follow
victory over Communism... We should withdraw diplomatic relations from all Communist governments including the Soviet Union. It would give heart to the enslaved peoples and help them overthrow their captors.

This cornerstone of our Republic, our chief bulwark against the encroachment of individual freedom by Big Government, is fast disappearing under the piling sands of absolutism. No powers regarding education were given the federal government. Despite the recent holding of the Supreme Court, I am firmly convinced that the Constitution does not permit any interference whatsoever by the federal government in the field of education.

I have great respect for the Supreme Court as an institution but I cannot believe that I display that respect by submitting abjectly to the abuses of power by the Court and by condoning its unconstitutional trespass into the legislative sphere of government.

It is not only ill administered but ill conceived. It has not made the free world stronger, it has made America weaker.

Right to work laws derive from the Natural Law. They are simply an attempt to give freedom of association the added protection of civil law... Let us henceforth make war on all monopolies whether corporate or union... The champions of freedom will fight against the concentration of power wherever they find it. 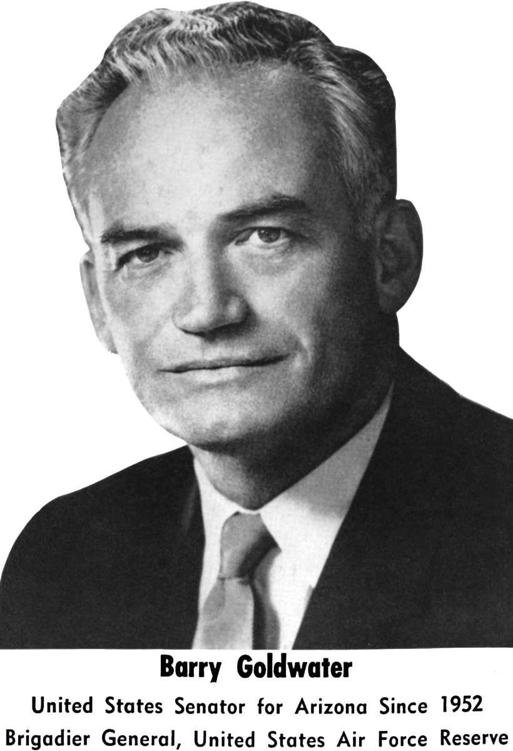 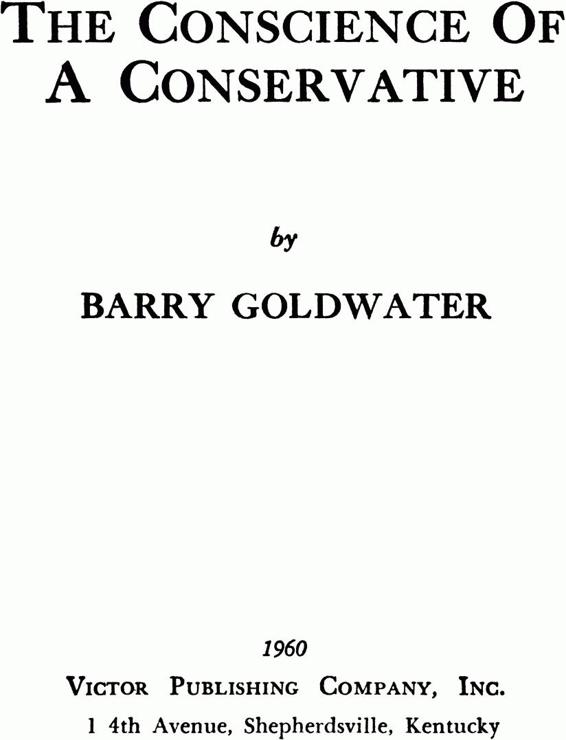 ALL RIGHTS RESERVED. No reproduction in any form of this book, in whole or in part, (except for brief quotation in critical articles or reviews) may be made without written authorization from the publisher.

T
HIS BOOK
is not written with the idea

of adding to or improving on the Conservative philosophy. Or of "bringing it up to date." The ancient and tested truths that guided our Republic through its early days will do equally well for us. The challenge to Conservatives today is quite simply to demonstrate the bearing of a proven philosophy on the problems of our own time.

I should explain the considerations that led me to join in this effort. I am a politician, a United States Senator. As such, I have had an opportunity to learn something about the political instincts of the American people, I have crossed the length and breadth of this great land hundreds of times and talked with tens of thousands of people, with Democrats and Republicans, with farmers and laborers and businessmen. I find that America is fundamentally a Conservative nation. The preponderant judgment of the American people, especially of the young people, is that the radical, or Liberal, approach has not worked and is not working. They yearn for a return to Conservative principles.

Castle Spellbound by John DeChancie
Tales From the Swollen Corpse by Sam Williams
All Pepped Up (Pepper Jones) by Ali Dean
Love Story, With Murders by Harry Bingham
Carried Home by Heather Manning
Dancing Dogs by Jon Katz
Execution Dock by Anne Perry
The Do's and Don'ts of Entering a Relationship by Robinson, Stephen
The Reach of a Chef by Michael Ruhlman
Sektion 20 by Paul Dowswell