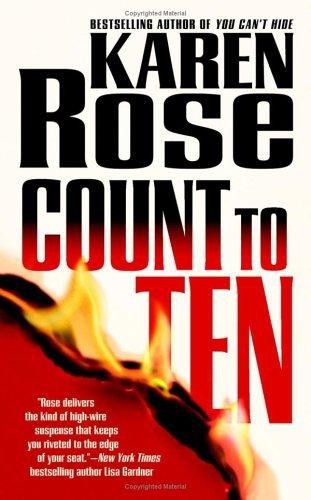 A Preview of
Die for Me

All rights reserved. Except as premitted under the U.S. Copyright Act of 1976, no part of this publication may be reproduced, distributed, or transmitted in any form or by any means, or stored in a database or retrieval system, without the prior written permission of the publisher.

Visit our Web site at
www.HachetteBookGroupUSA.com.

“This novel is, in a word, riveting.”

“An immensely enjoyable read...that will have the reader glued to the pages from beginning to end.”

“[Karen Rose] is the queen of murder and suspense...just terrific!”

“A pulse-pounding tale that has it all: suspense, action, and a very hunky private investigator.”

“Four and a half stars! Top pick!...Filled with heart-stopping suspense and graphic terror...In the pantheon of horrific killers, [this one] surely ranks near the top.”

“Readers can always count on Rose to deliver an action-packed book, and this one is no exception.”

“An absolute gem...It’s definitely earned a place on my keeper shelf, and I look forward to reading it again and again. This is what true romantic suspense is all about, and I thank Ms. Rose for such a wonderful read.”

“A tense, chilling suspense that readers will appreciate from start to finish.”

“A caring women’s advocate heroine, a determined, gritty hero, and a diabolical villain drive the plot of Rose’s riveting story.”

“The suspense unfolds right up to the last page.”

“A sensual, riveting book that kept me on the edge of my seat.”

“It’s perfect...Love the characters, loved the side stories. It doesn’t get any better than this!”

Have You Seen Her?

“Rose delivers the kind of high-wire suspense that keeps you riveted to the edge of your seat.”

“As gripping as a cold hand on the back of one’s neck...and tempered by lovable characters and a moving romance.”

“A well-written thriller—a definite page-turner that never lets up until the last page.”

“One of the best suspense novels [I’ve] read this summer...one hot author you don’t want to miss.”

—The Belles & Beaux of Romance

“Action-packed [with a] story line [that] is character driven.”

“A fantastic job of telling a tale...touchingly narrated.”

“
Don’t Tell
is a seat-of-your-pants tale, dragging the reader deep into the characters and wringing emotions from all -concerned.

“Karen Rose’s nail-biting delivery is unique...
Don’t Tell
is the harbinger of great things to come.”

“Excellent romantic suspense...will keep you on the edge of your seat...excellent writing and storytelling by Karen Rose.”

Have You Seen Her?

To Martin, for the twenty-five best years of my life. I love you.

To Cristy Carrington, for your beautiful poetry and seeing emotion in my characters that even I didn’t see. I had a rock. You made it beautiful.

To the sisters of my heart who know me and love me anyway. I love you all right back.

To Martin, for the twenty-five best years of my life. I love you.

To Cristy Carrington, for your beautiful poetry and seeing emotion in my characters that even I didn’t see. I had a rock. You made it beautiful.

To the sisters of my heart who know me and love me anyway. I love you all right back.

Marc Conterato, for all his medical know-how.

Cristy Carrington, for showing me the secrets of enjoying poetry and for her gift of the poems “Us” and “casper.”

Danny Agan, for answering all my detective questions.

Cindy Chavez, for answering my questions on foster care.

My fellow members of the Tampa Area Romance Authors, for support on everything from police funerals to sororities. You all are wonderful.

Julie Bouse, for sharing the story of her own family. Best of success to you, sweetie.

Any mistakes are my own.

H
e stared at the flames with grim satisfaction. The house was burning.

They were trapped inside. No neighbors around for miles to call for help. He could take out his cell. Call the police. The fire department. One side of his mouth lifted. But why? They were finally getting what they deserved. Finally. That it should be at his own hand was... fair.

He didn’t remember setting the fire, but he knew he must have done so. Without taking his eyes from the burning house, he lifted his hands to his nose. Sniffed at the leather gloves he wore. He could smell the gasoline on his hands.

Yes, he had done this thing. And he was fiercely, intensely glad he had.

But he hadn’t lived there. Shane had been alone, a lamb among wolves. And by the time he’d gotten out and come back, his brother was no longer a happy boy. By the time he’d come back, Shane walked with his head down, shame and fear in his eyes.

Because they’d hurt him. The rage bubbled and popped. In this very house where Shane should have been safe, in the very house that now burned like hell itself, they’d hurt Shane so that he’d never been the same again.

That his hatred and rage would bubble to the surface from time to time was inevitable, he supposed. It had been a part of him for nearly as long as he could remember. But the reason for his rage ... that reason he’d hidden from everyone. Including himself. He’d denied it for so long, retold the story so well... Even he’d had trouble remembering the truth. There were whole stretches of time that even he forgot. That he made himself forget. Because it had been too painful to remember.

He narrowed his eyes as the flames licked the walls of the wooden house that was burning like dry kindling. He wasn’t weak or pathetic or useless any longer. Now, he took what he wanted and damned the consequences.

His good sense started to creep in around the anger as it always did.

Sometimes, unfortunately, the consequences damned him. Especially when the anger took over as it had tonight. Tonight wasn’t the first time he’d stood back, looking at something he’d done, barely remembering the deed itself. It was the first fire...

He swallowed hard. It was the first fire in a long time. But he’d done other things. Necessary things. Things that would get him sent to prison if he got caught. Real prison this time, not juvenile detention which was bad enough, but manageable if a person had enough brains.

Tonight he’d killed. And he didn’t regret it. Not a bit. But he was lucky. This house was far away from any neighbors, any prying eyes. What if it had been a normal neighborhood in the city? What if he’d been seen? He asked himself this same question every time.
What if he got caught?

One day the rage that bubbled inside him was going to get him into more trouble than he could manage on his own. It ruled him. Made him vulnerable. He gritted his teeth. And being vulnerable was the one thing he would never let -happen again.

Suddenly the answer seemed so very clear. The rage had to go.

So the source of the rage had to go. Which meant all the people who’d hurt them, looked the other way, they all needed to go. Standing here, watching the flames, the memory of each one of those people came back. He could see faces. Hear names. Feel hate.

He tilted his head as the roof crashed in, sending sparks flying skyward like a million mini-flares. He’d made one hell of a fireworks show.

It would be hard to top a display like that. But of course he would. He didn’t do anything halfway. Whatever he did, he’d need to do well. For Shane. And for himself. Then he could finally close the book on this part of his life and move on.

That last shower of sparks might be enough to summon the local fire department. He’d better get while the getting was good. He got in his car and turned back toward the city, a smile bending his lips. The beginnings of a plan were forming in his mind.

It would be one hell of a show. And when the final curtain fell, Shane could finally rest in peace.
And I’ll finally be free.

The Power of Twelve by William Gladstone
Secrets of My Hollywood Life: Family Affairs by Jen Calonita
Black Is Back (Quentin Black Mystery #4) by JC Andrijeski
Overcoming His Pride by Amber Kell
Little Girl Lost by Tristan J. Tarwater
The Disestablishment of Paradise by Phillip Mann
The Royal Pursuit by Ruth Ann Nordin
Sweetest Sorrow (Forbidden Book 2) by J.M. Darhower
Dear and Glorious Physician by Taylor Caldwell
Tales Of A RATT by Blotzer, Bobby