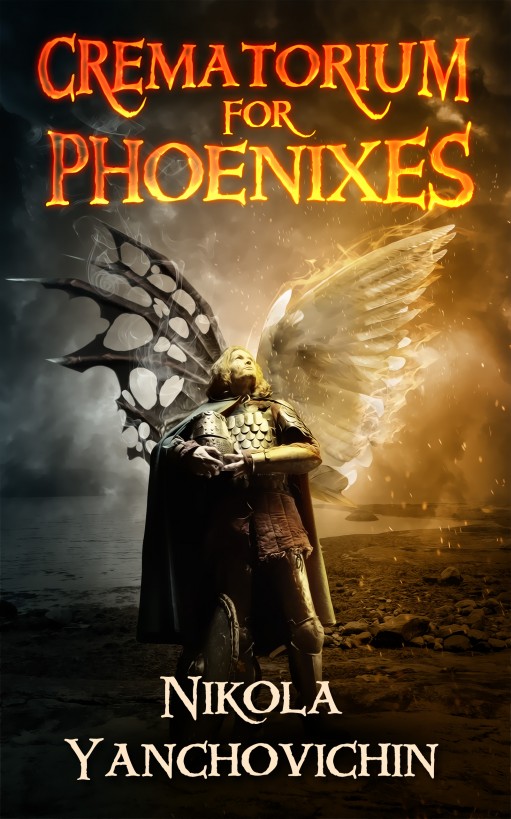 Thank you for downloading this ebook. This
book remains the copyrighted property of

the author, and may not be redistributed to
others for commercial or non-commercial

purposes. If you enjoyed this book, please
encourage your friends to download their own

copy from their Smashword. Thank you for your
support.

Everyone has a little treasure that brightens
and interprets his days in the galleries of everyday life. To that
one which once was mine.

Outbreaks of the fires crackle from the
stockpiled coals. Gigantic blowers kindle the flames that curl and
hiss like snakes. Combining into a graceful spiral, they give
fleeting, deadly kisses to the black, dead ore, stoking her like a
river of molten saliva in a demon’s mouth. Dozens of foundries,
conductors of these transactions, discharge the resulting products
into huge metal molds, creating fireworks of bright sparks.

Thus reborn, the metal goes to the next
birth.

Skilled blacksmiths remodel the matter with
their hammers, breathing into her spirit while bathing in tears and
blood from the dragons of the far north. They create weapons
according to ancient tradition—weapons capable of killing gods.

But this story is not about the taking of a
life but the birth of one.

And of course, there aren’t legendary
weapons tempered in the blood and the tears of monsters and
demons.

But there are indeed legends.

And there are monsters and demons.

A hypnotic glow shone over the mounded
hills, which were crowned with jagged ruins like cobweb tiaras.

Here and there, among the debris of time,
and made of him, glowed the lights of a village, lit roads
intertwined like writhing snakes.

On one of them—strip tracks and grass,
ambled a van.

Carved and painted with a waved plate and a
wrought iron lantern, the van seemed to belong to good or evil,
coming up the road and disappearing into the descending dusk.

Slowly the winds blew through the ravines,
but the wagon rattled with that song for travelers that came in
mind with such transportation, from time to time waking up some
dog.

The sky meanwhile was illuminated by the
glow from far worlds. The clouds imitated good or unclean ghosts
with their extended arms coming from the distance, and the van
finally arrived.

Before it stood a castle or what remained of
it—cambered portico, collapsed towers and walls, a structure that
looked like a eyeless creature.

Among the cobblestones, seemingly unusual,
there was a small two-story building, bathed in light, resonant
with voices and laughter.

From the van descended a man whose
appearance was unrecognizable in this game of lights and shadows,
which illuminated the sign on his vehicle; Gothic lettering
surrounded with a soul-like alphabet read: “Books about everything
and everything about books.” The building in turn proclaimed:
“Barrels Pub,” which was woven into a gun whose barrel was made
from wine barrels. The man smiled and opened the door.

The room was full of tables and benches
carved from oak trees and bent by dozens of men who were laughing,
waving bowls and jugs of ale.

The man who came in seemed to shudder but
went to the bar—polished with use, where the innkeeper, a chubby,
fat man, was cleaning the mugs.

Here and there darted curious, bored, and
amused eyes, but the stranger did not seem to notice them.

The landlord also gave him a glance, but the
next order distracted him.

“Excuse me,” the man said in a low, deep
voice.

“Can I spend the night here?” asked the
man.

“This is not the inn, sir, and you have to
eat a lot in order for me to let you sleep on one of the benches,”
the innkeeper replied irritably.

“Of course, in that case I would ask for
something, anything, to eat,” the man said calmly, without any sign
that he had been offended.

The landlord fumbled with the wooden
cupboards at the bar, pulled dry bread and cheese out, and started
to pour wine, but the man interrupted him. “Only water, please, I
must travel. Maybe . . .” the last part was said very
quietly, as if he was talking to himself.

The landlord shrugged contemptuously, gave
the man his meager dinner, and turned to other customers.

“Wow, damn it, you’re really from the
circus—couldn’t be otherwise with that van!” shouted one wag, who
had previously seen it in the murky, barred windows.

“Damn hard number not to drink,” said the
wisecracker and looked so sadly into his mug that it sparked
widespread laughter in the silent room.

“Actually it’s not,” the man said in a
voice whose depth and coldness sounded defiant.

“And what do you do?” asked the joker
with that cheeky anger that the drunk allow themselves with
company.

“Nothing specific, but enough to afford to
buy something for fair, thirsty men,” said the man and took
out a handful of gold coins. “One for all,” he said and gave
the money to the innkeeper.

The innkeeper, surprised by the generosity,
immediately fumbled to bring some more good food for the strange
guest, but he stopped him with that quiet yet pervasive voice.

“Are you sure, sir? It’s still a lot of
money,” the landlord said, surprising even himself with his
caution.

“Yes, really, a lot of money, but it is no
longer mine,” said the man, smiling shrewdly. The lighting and the
shadows in the room gave him sometimes a predatory and other times
a calm appearance. His eyes flashed like a far-off but already dead
star.

One of the visitors, one of those people who
are found in every inn and tavern, a preserved old man whose
reputation as a marine or terrestrial wolf instantly gained respect
around such places shouted, “Mister, you’re more generous than the
devil when he is buying from the people their souls!”

“Well, I can always offer more than him,”
said the man. His voice sounded as if it came from fathomless
depths.

The crowd was shocked. People with sullen
faces and fierce life all went silence. They do not worship
anything except the threatening afterlife. The old man with his
threadbare linen shirt, oiled cotton jacket, and scuffed boots
said, “That’s not a good story, as you know. I knew a man who once
said that he would play cards with the Wicked just to feel equal,
and now he is an island. You have probably heard of it: the Islas
de Sakrifisios in the newly discovered lands.

“And his big mouth serves as a cup. He was
offered as a sacrifice, and his skull is highly respected among the
natives who talk about what kind of man would dare to curse even
his own gods. Somebody who listened to this would be completely off
his drink. What you’ve said is not greatness. Let few hearts
rejoice with the money, as requested.”

“Sure. Sometimes we speak before we
ourselves have said something. Cheers,” the man quietly
said.

The pub was speechless. Everyone was trying
to understand the strange toast, but after one or two more toasts,
everything went on as usual.

Apparently the stranger was one of those
weirdos—beaten or overtaken by time, draped in the cloak of
loneliness, who loved to speak strangely in an unearthly whisper.
He was unlikely to be heard but wanted to talk about thousands of
things. He was not unhappy but was also not necessarily happy. From
the reflection of light or other things his eyes sometimes glowed
in the soft warmth, sometimes sparkled like a predator, sometimes
watered as a blind man or ancient ruler.

In him it seemed as if there were
intertwined all those doubts that damned spirits experience—always
a step away from what will give them rest.

Indeed, in all the commotion, as dozens of
barrels were rolled out for the upcoming feast, this man was
trapped by something. He was in some sort of film that relentlessly
captivates one’s consciousness and slowly swallows it whole.

The old man approached him, bent down, and
said, “You’ve got something on your mind, huh? Whatever it is,
don’t disturb the Holy Inquisition.”

The man smiled a little and said, “Torture
does not consist in being tortured by somebody. This is more likely
the desire to live, and death is always with you.”

“Look, you like to talk as if you get
revelations. Be careful. They are only made by those possessed by
good and bad forces, and God knows that people do not like either
of them. You’re here to do a job, so do it.”

“Actually, yes. I need people who will
follow me in something. And if they are caught, they will be burned
as servants of the Devil.”

The old man shuddered like he had swallowed
an astringent cup of poison and said, “I know that you aren’t
joking. I will tell you, friend, death is a prison in which we are
all chained. I can find a few who are smart enough not to ask
questions and foolish enough to be mistrustful of organizations
such as the Inquisition. But what are you talking about?”

“You would not believe me.”

“My friend, believe me, I’ve seen a lot of
things in my life. My name is Amos Oz. I have watched tropical
yellow fever knock down a whole crew and how the wretched are
dumped overboard to save the rest. I have observed ships stuffed
with pepper bags and with all these riches people swelled up with
disease while water flowed from them—I won’t tell you from where it
was coming. If you tell me what you’re doing, I’ll help.”

“You must see it to see. If you want to
change your life, you should follow me,” said the man and
started to leave.

“Well, what the hell?” Amos Oz said and
winked at a few people who instantly followed him.

The company followed the man.

The night covered the turquoise ground with
his mantle, torn clouds were like pieces of broken obsidian that
hid the silver moon.

After walking a bit, climbing some sandy
hills, the group came to the beach that churned as densely as
boiled tar.

The man pulled away from the line and swayed
in the wind. He revealed a parchment scroll and a pocket knife from
his coat and said, “Here comes my request, which is beyond what man
can ask. To move forward, you must sign this paper with your blood.
This is more than enough to be killed as wizards. If anybody wants
to leave, this is the time to go back . . . .

“This irritates me. We are not a of bunch
kids who have been left overnight in a cemetery, so stop this
nonsense and cut to the chase,” said one of the men.

“Okay, let each one of you make a wound,”
the stranger answered and gave them the knife.

“And now everyone can drip blood on the
parchment.”

As the last drops of blood fell on the
scroll, he seemed to come alive. Dozens of ruby-red lines carved
across the surface of the scroll, and the men fell to their knees.
Their eyes became a watery white and their lips began to speak
thousands of words. Meanwhile the stranger’s head seemed to be full
of blood. His entire circulatory system swelled, swelled to his
brain at every ripple.

A Bravo Homecoming by Christine Rimmer
Heritage: Book One of the Gairden Chronicles by David L. Craddock
Best Sex Writing 2009 by Rachel Kramer Bussel
Falling Through Space by Ellen Gilchrist
Man of Two Tribes by Arthur W. Upfield
Harvest A Novel by Jim Crace
Stories in a Lost World: Kristy by Mortimer, L.C.
The Barbarian by Georgia Fox
The Collected Poetry of Nikki Giovanni by Nikki Giovanni
El bosque encantado by Enid Blyton