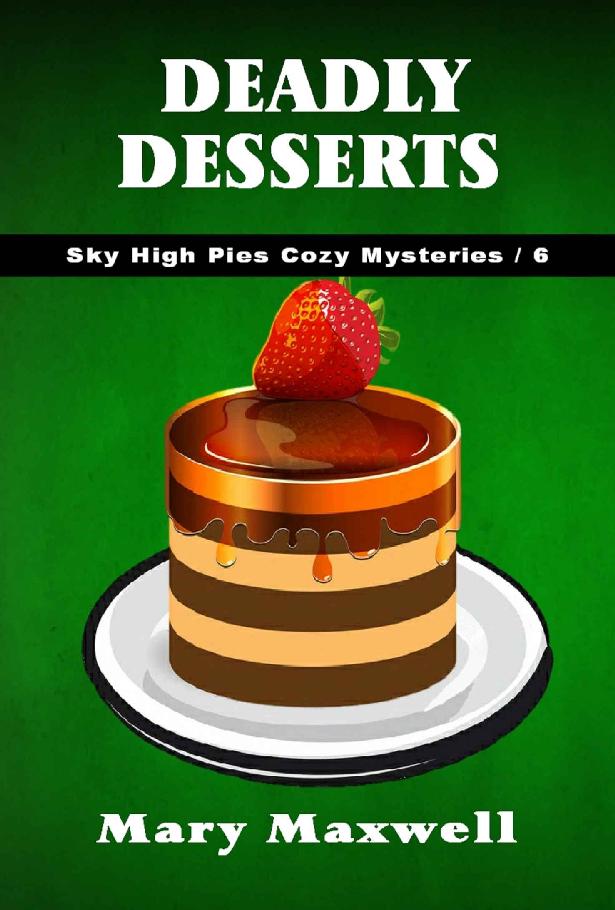 This is a work of fiction. Names, characters, places and
incidents are the product of the author’s imagination or used fictitiously, and
any resemblance to actual persons, living or dead, business establishments,
events or locales is entirely coincidental.

All rights reserved. No part of this book may be reproduced,
stored in a retrieval system or transmitted in any form or by any means
electronic, mechanical, recorded or otherwise, without the prior permission of
the author except for the use of brief quotations in a review.

“Am I speaking with…Kate Reed?”
asked the voice on the phone. “The one that runs…the pie place?”

It was half past one on a chilly,
overcast day in April. After a busy breakfast rush and an early surge for lunch,
things had calmed down in the last hour. Julia was in the kitchen handling
customer orders, Harper was managing the dining room and I was paying bills in
the office at Sky High Pies, the bakery café that I run in Crescent Creek, Colorado.

The caller sounded like she was
maybe twelve or thirteen at the most. She spoke with a slight British accent
and the tendency to pause frequently at curious intervals.

“Do you actually…
make
the
pies?”

“Our chef Julia and I both do,” I
said. “Along with cakes, cookies, scones and—”

“Well, we sure think so! My
grandmother started Sky High more than forty years ago, and then my parents ran
it for—”

She giggled. “I know. It’s for a
surprise…anniversary party.” She delivered the unexpected twist with a maturity
beyond her youthful years. “It will be next month when my parents get back from
Cannes.”

Another tinkling laugh came over
the line. I’d never taken a telephone order from anyone quite so young or
precocious.

The girl laughed again. “Is there
another?”

I took a breath. “I don’t know
actually. I was just…well, it’s not a place that comes up in conversation all
that often in Crescent Creek.”

“My father’s in the movie
business,” the pipsqueak confessed after more soft laughter. “Perhaps you’ve
heard of him: Brendan Ascot.”

I’d never heard the name, but I
didn’t want to offend the young customer. So I said, “Oh, Brendan Ascot…” I
paused for my own attempt at theatricality. “And what’s your name?”

She giggled again before providing
the answer: Abigail. Then she launched into a brief summary of her father’s
greatest hits. I listened to the first three or four, but then my mind wandered
to the list of things I needed to accomplish before Sky High closed at three o’clock.

“…and his most recent blockbuster
was a film about a comic book crime fighter that wears purple tights,” Abigail
said, drawing to a close. “It wasn’t to my taste, so I can’t even bring myself
to say the name.”

“That makes two of us,” I admitted.
“Although I rarely get out to the movies these days, what with baking pies and
all the rest.”

“Fascinating,” she said in a
lackluster tone. “What’s your schedule like in the next day or two?”

“Didn’t you tell me the party was
next month?”

“Yes,” she said. “But I’d like to
stop by for a tasting in the next couple of days.”

I smiled to myself. There was
something exceptionally likable about the girl, a bold confidence that conveyed
a mature and self-possessed charisma. As she explained why she wanted to sample
our pies—something about a disastrous catered event that her parents once
hosted for a member of the British royal family—I conjured an image in my mind
of the young girl on the other end of the line. I pictured her with porcelain
skin, impeccable hair, a slightly upturned button nose and delicate hands that
danced through the air as she spoke.

“How about the day after next at
one or two?” she suggested. “I’ll bring my older brother if he can break away
from his Xbox long enough to join me. And I should warn you right now—he has a
tendency to be fairly rude to strangers!”

“I understand that,” I said. “I
have a brother and sister myself.”

“Well, from what I’ve read online,
they’re lucky to have you.”

“What?” Abigail said. “Are you
surprised that I Googled you before calling?”

“Well, there’s always a first time
for everything,” I said through a bemused smile.

“My father and mother encourage us
to be as independent as possible,” she said. “My brother spends his time
playing video games, but I like learning things. When I decided to host an
anniversary party, I wanted it to have a relaxed vibe. Thus, the idea of pies
and ice cream and board games. I searched for the best pies in Colorado and
your place kept coming out on top.”

“The party idea sounds really
sweet,” I said. “And I’m flattered that you’ve chosen Sky High to make the
pies. It’s nice to know that our reputation today is as good as it was when my
Nana Reed—”

“Sorry to interrupt,” she said.
“But it’s almost time for my piano lesson. I’m glad we had a chance to chat,
Miss Reed. I’ll plan on seeing you in a couple of days for the tasting.”

She thanked me again before a
gentle
click
ended the call. I got up from my desk, wandered into the
Sky High kitchen and sat on a stool near the back counter. I was staring at my
phone a few moments later, still thinking about the giggling go-getter on the
phone, when Julia came out of the walk-in cooler with a box of eggs and a
gallon of milk.

“Is everything okay?” she asked.

I blinked and nodded.

“Was that about the Food & Wine
Festival?”

“Do you still have the judges’
meeting this afternoon?”

“Then why do you have that look on
your face?”

“It’s the ‘forlorn and confused’
look,” she explained. “The same one you get whenever your brother calls to
borrow money or ask your advice about dating.”

She carried the eggs and milk to
the counter before walking around the center island to where I stood.

“Was it bad news or something?”

The sincerity of her voice and
touch of her hand brought me out of the trance. “Sorry, Jules,” I said, shaking
off the lingering impression of my conversation with Abigail Alcott. “I just
talked to a very precocious child and she left me kind of thunderstruck.”

Julia laughed. “A precocious child?
Was it my husband?”

“No, why? Has he been acting up
lately?”

She rolled her eyes. “He lost a bet
with a guy at work, something about football or hockey trivia. I’ve never seen
him so grouchy.”

“Well, you know what my grandmother
used to say?”

“Her name is Abigail Ascot,” I
said. “She ordered eighteen pies for her parents’ anniversary party.”

Julia’s eyes bulged. “Eighteen? For
when?”

“Next month. But she’s coming in
for a tasting this week.”

Her wide gaze narrowed. “A
tasting
?”

“Abigail Ascot,” I said. “And I’m actually
looking forward to it. She reminded me of someone I knew when I was younger.”

Julia went around the island and
started cracking eggs into a bowl. “Oh, yeah? Who’s that?”

“Me,” I said, feeling a flicker of
bittersweet nostalgia in my heart. “Back when I was young and naïve and
convinced that anything could be possible.”

Pinky Newton was standing on the
sidewalk in front of her flower shop when I pulled up at twenty past five. She had a dozen yellow roses tucked under one arm, a large striped canvas satchel
over her shoulder and a bright red Twizzler clutched in her teeth. When she saw
my car, she removed the licorice and gave me a big wave.

“You are truly an angel!” she said,
climbing into the passenger seat. “I guess the battery’s dead on my car or
something. I drove it earlier without any problems when I went to…” She stopped
and her mouth puckered into a frown. “When I went to the dry cleaner, so I
don’t know what happened.”

“Do you want to try and get it
started?” I asked. “I’ve got jumper cables in the trunk.”

She tapped her watch with one
finger. “We’re already behind schedule, but thanks for the offer. I’ll call
Skip Bledsoe’s tow service after the meeting. Portia will skin us alive for
being any later than we are already.”

I motioned at the licorice. “Is
that lunch or dinner?”

She grinned. “Both. But at least it’s
low fat and yummy!”

“So are martinis, but we can’t live
on those alone.”

She shot me a disapproving look.
“Well, there just aren’t enough hours in the day, Katie. I still haven’t found
the right person to help me in the shop, so I’ve been running around like a
crazy loon. No time to eat. No time to reapply my makeup. And no time to flirt
with that cute man who opened the wine bar across the street.”

I giggled. “Well, that’s a good
thing, sweetie. Because that cute man’s cute wife probably wouldn’t like you
flirting with her husband.”

“Oh, golly!” She grimaced and
covered her mouth. “I think it’s too late for that. I went over last week with
a dozen fresh-baked sugar cookies.”

“No harm done,” I said. “As long as
you didn’t throw yourself at the guy.”

“I would
never
do anything
so crass, Katie.” She finished the Twizzler and pulled the bag of candy from
her satchel. “You want one?”

“Suit yourself,” she said, pulling
a second piece of licorice from the nearly-empty bag. “I know Portia would
disapprove of me eating these before we sample things for the festival, but I
haven’t had anything since a blueberry Pop-Tart this morning at six.”

She took a bite. And then another.
By the time we pulled up in front of Portia Pearson’s furniture store, the last
piece of licorice was history and Pinky was tugging a Wet-Nap from the
container she always kept in her tote.

“Want one?” She held the canister
of moist towelettes toward me.

She raised her eyebrows. “Go for
it.”

“What about Brittany Kincaid?”

Pinky frowned. “What’s she got to
do with Wet-Naps?”

“She’s looking for a part-time
opportunity.”

“Oh, I get it,” Pinky said. “But
isn’t she Detective Kincaid’s niece?”

I nodded and parked the car in a
spot at the curb. “The one and only. Brittany’s a senior at Crescent Creek High.
She’s a really smart girl; disciplined, dedicated and a hard worker.”

“Then why isn’t she already
working?” Pinky asked. “I mean, with qualifications like that
and
a
detective in the family? You’d think somebody would hire her in a heartbeat.”

“Somebody did,” I said. “Ralph
Swenson.”

Pinky’s eyes did a wild loop. “Oh,
that explains everything.”

“Is it true he embezzled all that
money?” she asked.

“Half a million dollars.”

I frowned. “Her and everyone else
that worked at the jewelry store.”

“Maybe somebody will reopen it,”
Pinky suggested.

“That would be nice, but it doesn’t
help Brittany or the others right now.”

Pinky dabbed the Wet-Nap around her
mouth with tiny, precise movements. I’d known her long enough to recognize the
meditative expression on her face; she was considering my suggestion by
comparing Dina’s niece to all of her former employees. With each diminutive pat
of the damp cloth, the muscles in her neck seemed to relax a little more. As I
shut off the engine and opened my door, she asked if I had Brittany’s number
handy.

“Thanks, Katie! I think you may
have just saved my life!”

“All in a day’s work,” I said with
a laugh. “And I hope I didn’t save it just so Portia can stab you in the back.
I heard some chatter on the grapevine earlier; she’s been in a foul mood lately
and no one is safe from her wrath.”