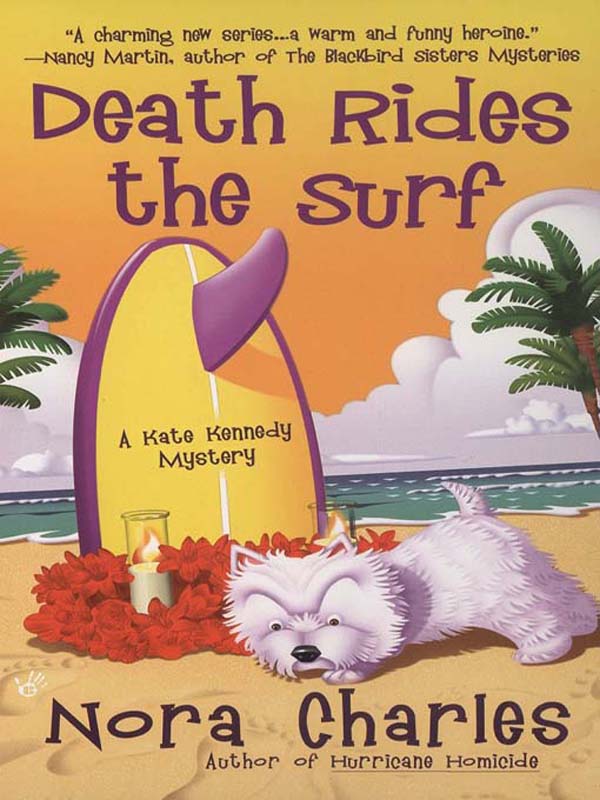 Praise for the Kate Kennedy Mysteries

“A charming new series that sparkles like the South Florida sunshine…Kate Kennedy is a warm and funny heroine…An ideal beach read…Sure to please.”

“Miss Marple with a modern twist.”

—Donna Andrews, Agatha and Anthony Award–winning author of
You’ve Got Murder
and
Delete All Suspects

“Kate Kennedy will make you laugh and keep you on the edge of your seat until the very last page.”

“The characters in this new series are terrific. Nora Charles has done a great job creating the characters and setting for the story. I look forward to reading many more in the series and highly recommend this book.”

“
Death Is a Bargain
is another top-notch entry in a great series.”—Carolyn Hart, author of
Dead Days of Summer

“A fun take on an English village cozy with an endearing heroine,
Death with an Ocean View
is a quick read that has potential to become a favorite with young and old alike.”

DEATH WITH AN OCEAN VIEW

DEATH IS A BARGAIN

A Berkley Prime Crime Book / published by arrangement with the author

To the memory of Ballou Hanson

The lovable and loving Westie
was born on Christmas Eve 1993 in Jakarta, Indonesia,
and left us on November 13, 2005, in McLean, Virginia.
The real Ballou gave as much—or more—love and support
to his real parents, Peggy and Jim Hanson,
as the fictional Ballou gives to Kate.

And a big thank you to my editor, Tom Colgan, and to my agent, Peter Rubie. They are the best support team any author could have.

There were funerals
where you knew, with cold certainty, that the corpse wouldn’t be the only person you’d never see again. Kate Kennedy had just returned from one.

The deceased, Jane Kuloski Whitcomb, flew with Kate almost fifty years ago when they’d been Eastern Airlines stewardesses. Over the decades, they exchanged Christmas cards and photos of their kids, and met a few times when Jane would come back to New York to visit her mother.

Somehow Kate, who prided herself on her powers of observation, hadn’t noticed that Jane had become a practicing snob. Then last winter, Jane—who’d married a dermatologist, not a detective—moved from the Midwest to Palm Beach and attempted to revive their old friendship. Kate discovered that not only did they have nothing in common, she didn’t even like Jane.

Of course, that awakening hadn’t kept Kate from attending Jane’s requiem mass, where she’d shared a pew with two of the other—and much more famous—Kennedy family cousins.

“Shriver or Smith?” Marlene Friedman, Kate’s forever best friend and former sister-in-law, sounded like Chris Matthews as she and Kate strolled down the Neptune Boulevard Pier, trying to walk off calories after devouring platters of fried shrimp and hot fudge sundaes at dinner.

Kate picked up the pace. “I’m not sure. They all look alike to me. Lots of teeth. I think the young man—well, he must be in his forties—might have been one of Bobby’s brood.”

A pale gold harvest moon rose in the early evening sky. The moist, salty air held a hint of South Florida autumn, as waves on either side of them crashed against the beach.

Under the spotlights, one of the two guys at the end of the pier appeared to be struggling with a large fish. A bearded, younger man stowed bait and beer in a small motorboat. A mellow Frank Sinatra sang “My Way,” but the lyrics faded out as Kate and Marlene approached the men. The bearded man waved. He looked familiar. Probably a regular at the Neptune Inn.

Kate waved back. Sometime over the last year, after the intense, constant grieving for Charlie—who’d never lived in the condo he’d chosen—had morphed into a dull ache, always with her but bearable, Palmetto Beach had become home.

Marlene shook her head, her platinum twist holding firm in the sea breeze. “Really, an honest-to-God celebrity sighting and you can’t even identify which Kennedy you saw.”

“I was at a funeral, Marlene.” Kate laughed. “I couldn’t ask for an autograph.”

Marlene’s frustrated expression indicated that was exactly what Kate should have done. “So, if you didn’t relate to any of the mourners, maybe I would. Widower Whitcomb walks, talks,
and
has money, right? How bad can he be? And I could use a chemical peel. A dermatologist’s almost as good as a plastic surgeon.”

Kate laughed. She and Marlene had put Kate’s granddaughter Katharine’s unrequited love story on hold during dinner, though Marlene did report on her morning visit to the boy’s grandmother who ran the only tanning salon/talking skull operation in South Florida.

“Shark!” The slimmer of the two fishermen standing at the edge of the pier dropped his pole. “Jesus Christ! Is that blood?”

The motor on the small boat revved up, and the bearded young man at the tiller veered south toward what appeared to be, by the light of the moon, a body floating facedown.

“Call 911, quick!” the slim fisherman yelled, and then hopped into the bearded young man’s moving boat.

The heavyset man peered into the water. “Looks like one of them goddamn surfers.” He gestured toward the beach. “That’s a piece of his board over there.”

As the man punched in the numbers on his cell phone, Marlene screamed. An ungodly, piercing wail. Kate watched in horror as the bearded man steadied the boat and the slim man reached over port side into the sea and pulled a bloody stump on board.

Because You Are Mine Part V: Because I Said So by Beth Kery
Lucy in the Sky by Anonymous
Slavemakers by Joseph Wallace
Shadow on the Sun by Richard Matheson
Kris Longknife 13 - Unrelenting by Mike Shepherd
Jonathan Moeller - The Ghosts 08 - Ghost in the Mask by Jonathan Moeller
Kate Sherwood - Dark Horse 2.1 - On Deck by Kate Sherwood
1972 by Morgan Llywelyn
Sin noticias de Gurb by Eduardo Mendoza
And De Fun Don't Done by Robert G. Barrett