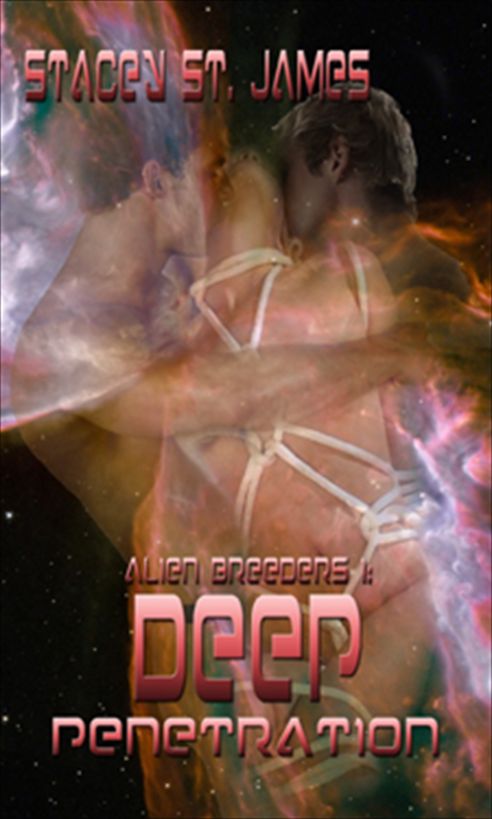 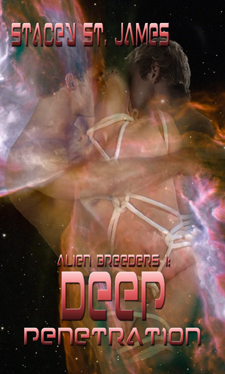 This is a work of fiction. All
characters, events, and places are of the author’s imagination and
not to be confused with fact. Any resemblance to living persons or
events is merely coincidence.

There was something in the darkness,
something terrifying. Emerald could feel its presence and her heart
began to pound with the fear that grew in her along with the
certainty that if she didn’t find a way to escape it, the evil
thing would catch her. She glanced away, searching for some place
to run to, some place to hide, but there was a thick fog rolling
around her that obscured her surroundings.

It didn’t matter, she told herself.
She just needed to get away, to put some distance between herself
and the threat and then she would find a place to hide. Not even
the fear seemed to lend her the strength she needed to flee,
though. Every muscle in her body strained with effort and she still
found she could barely move. Her heart thundered faster the harder
she struggled until she hardly breathe for fear tightening her
chest.

It was coming. She could feel it
coming. Her fear sharpened when she felt it directly behind her.
She struggled to scream and came awake with a jolt that echoed
throughout her body as if she’d fallen and landed hard.

Sucking in a sharp breath, trying to
calm her racing heart, she lay for several moments with her eyes
closed, reassuring herself that it had been nothing but a dream and
at the same time struggling to recapture the nightmare and figure
out what had scared her so much. The little she remembered began to
fade almost immediately, though, far faster than the effects it had
had on her. Realizing after a few moments that sleep had escaped
her and that she really didn’t want to go back to sleep for fear
the dream would resume, she opened her eyes.

She almost thought when she had that
she was still asleep and dreaming. The wall she found herself
staring at didn’t look the least bit familiar. Frowning, struggling
now to recall her last memories before she’d fallen asleep, she
scanned everything within view and finally turned her head to
search further.

Her heart, which had barely begun to
regain its natural rhythm, leapt with alarm when she saw the two
men—the two beings—standing between her and the door. She would’ve
leapt from the bed except she discovered she was bound to
it.

The taller of the two moved a little
closer. “Don’t be alarmed. You’re safe.”

He spoke English? It threw her. For
several moments she wondered if something was wrong with her eyes
or her mind, or if it was purely an illusion of light and shadows,
but even though she blinked rapidly, the being still looked
alien—almost human, but different enough there was no doubt in her
mind that he wasn’t.

She stared at him hard, trying to will
the strangeness to vanish, searching his features. The sharp angles
and planes that made up his face might have been human. His nose
was long and narrow, the nostrils slanted upward in a sharp angle
that almost bordered a sneer and yet there was nothing else about
his expression to suggest contempt. It was merely the natural
slant, she was certain, and it gave him an almost regal, superior
appearance. His mouth was little more than a slash, the lips hard
and thin. The deep set eyes above the prominent cheekbones were the
least human-looking feature. Surrounded by long, heavy lashes, they
were slanted far more than human eyes, large and heavy lidded. A
thick pelt of pale hair, cut in layers and groomed in a style that
was almost familiar framed his face and brushed his
shoulders.

His skin and hair tones were almost
the most human-like features he possessed.

Overall, the impression was almost
that of a predatory bird—the angular face and beak of a nose almost
hawk-like—attractive enough in a strangely exotic way, and still
unhuman-like enough to make her belly stir with
uneasiness.

She scanned down his length, her gaze
flickering over his hands, his long legs and torso, clothed in some
strange metallic-looking material in a style that seemed as exotic
as his physical appearance and yet oddly familiar, and finally
returning to his face. He was the height of a tall human male, his
build almost as angular as his face, but still very human-like in
his proportions and shape, his hips and waist narrow and V’ing
upward to form a wide chest and broad shoulders, not merely
humanoid.

“
Where am I?” she asked
finally, alarmed to discover speech was a great effort, her voice
hoarse as if with disuse.

Something flickered in his eyes.
“Earth.”

Emerald felt her heart begin to pound
again, although she couldn’t decide why that would frighten her.
Maybe because she didn’t believe him? “You’re not … human. What are
you?”

The other being moved up beside him.
He was taller than the first by several inches, and far broader,
less angular. Oddly enough, the ‘predatory bird’ impression
persisted with him, however, for his face was also hard and
angular, despite the fact that he clearly had more muscle mass. His
hair was longer and almost black. “I’m sure you have many
questions. Rest. We’ll talk later.”

Anger flickered through Emerald
despite her lingering alarm at her discovery that she’d woken among
aliens. “Rest? Tied down?” she asked tightly.

The two men exchanged a long look. The
first man spoke again. “The restraints were only for your safety,
to keep you falling while you were unconscious. I can remove them
now that you’re awake.”

Emerald was suddenly uncertain of
whether she wanted him that close to her. On the other hand, being
tied down was certainly no comfort. She swallowed a little
convulsively, struggling to dredge up an attempt to be cordial when
she felt more threatened as time progressed. “Please.”

He seemed to hesitate, as if trying to
decide whether she was mentally stable enough to make her request
reasonable and finally moved closer. The other man remained where
he was, which was some relief until it occurred to her that it
might be more a matter of precaution rather than for her comfort.
He was closer to the door and positioned in a way that would make
escape unlikely even if the first man was distracted enough for her
to elude him.

The man who’d approached went to a
small console beside the narrow bed where she lay and touched
several buttons. The restraints across her chest and hips released
and retracted. Her attention caught by the movement, her gaze
followed instinctively, and she saw she wasn’t lying on a bed at
all, but rather inside some sort of coffin-like capsule. The part
she was lying on had the look of a narrow bunk or hospital bed, but
above her was a clear, lozenge shaped top that she knew, somehow,
had enclosed her until very recently. Alarm fluttered through her
again. Struggling with it, she scanned the contraption, trying to
decide what it was and what its purpose might be.

“
Do you feel strong enough
to walk? If so, we’ll escort you to … a more comfortable
room.”

Emerald jerked a quick glance toward
the one who’d spoken—the dark one—searching her mind for some
reason she might not be strong enough to walk. Nothing came to her.
In fact, her mind was strangely bereft of memories and that alarmed
her even more. “Why wouldn’t I be?”

His dark brows rose questioningly, but
she could see something flicker in his eyes and the suspicion arose
that he not only knew exactly what she was asking, he knew why she
might be weak. She dismissed the question for the moment since it
seemed clear that neither of them meant to tell her anything and a
sense of self-preservation made her reluctant to let them know she
couldn’t remember anything.

In any case, panic began to claw at
her the moment she realized just how empty her mind was of
memories. It wasn’t just that she still couldn’t remember what had
happened just before she fell asleep. She couldn’t summon any sort
of memories from before she’d fallen asleep. The effort to capture
something—anything—made sharp pains stab at her brain. The
suspicion instantly arose that they might not only know why, but
might be responsible for the memory loss. More importantly at the
moment, though, she knew her survival might well depend on keeping
her wits about her. She couldn’t afford to yield to the hysteria
trying to gain a hold on her.

Her body, she discovered, responded
sluggishly to the internal command to rise. She sat up with an
effort, a conscious command of her muscles rather than the
automatic response it should have been. Dizziness instantly
assailed her. She closed her eyes, struggling against it and felt
hands settle on her shoulders. When her eyes popped open in
response, she discovered the fair haired alien had caught
her.

Her heart sped up, palpitating in a
jerky way that further unnerved her as she found herself staring
into his eyes, felt her senses expand instantly to encompass him.
Despite the fact that his appearance was lean, she discovered that
it was misleading. It was his height that made him seem slender.
The hands gripping her shoulders were large and powerful, his chest
far broader than she’d realized. Unconsciously, she sucked in a
deep breath, inhaling his scent.

It was oddly reassuring when he didn’t
look human to discover that his scent was comfortingly
familiar—even appealing to her senses—not alien. “I’m alright,” she
said a little stiltedly.

He seemed reluctant to release her,
but she became certain that it wasn’t merely concern for her
dizziness. For a moment longer, he held her, staring at her face,
and then he seemed to come to himself. He released his hold and
allowed his arms to drop to his sides.

Emerald made a new, unpleasant
discovery, when she tossed aside the sheet that had covered
her.

Her gaze flew upward with a mixture of
alarm and accusation from her bare breasts and groin to the man
standing over her. She saw anger flicker in his eyes briefly.
Instead of saying anything, however, he picked up the sheet that
had dropped from her and held it up in offering. Emerald snatched
it from him and struggled to wrap it around herself, sliding her
legs over the side of the platform she’d been lying on and inching
her buttocks toward the edge. The floor was further than she’d
expected. Her bare feet met icy metal when she slipped from the bed
to the floor, landing with an impact that sent stinging sensation
through the soles of her feet. Her ankles and knees jolted and
nearly gave out. He curled his hand around one arm, steadied her,
and released her.

Emerald felt as heavy as if she’d just
climbed out of a pool of water after being buoyed by it for hours.
Striving to ignore the heaviness and at the same time pretend it
wasn’t so lest they perceive her weakness, she focused on adjusting
the length of fabric to allow herself a few moments to gather
defenses.

KnockingonDemon'sDoor by Unknown
The Wolf's Hour by Robert McCammon
In the Custody of the Dom (Hideaway Book 1) by Elyse Scott
Shadows of Time: Shadow Maiden by B.R. Nicholson
Meeting Danger (Danger #1) by Allyson Simonian, Caila Jaynes
Tainted Crimson by Tarisa Marie
Anatomy of a Girl Gang (9781551525303) by Little, Ashley
I Now Pronounce You Someone Else by Erin McCahan
What Am I Doing Here? by Bruce Chatwin
Crooked Little Vein by Ellis, Warren