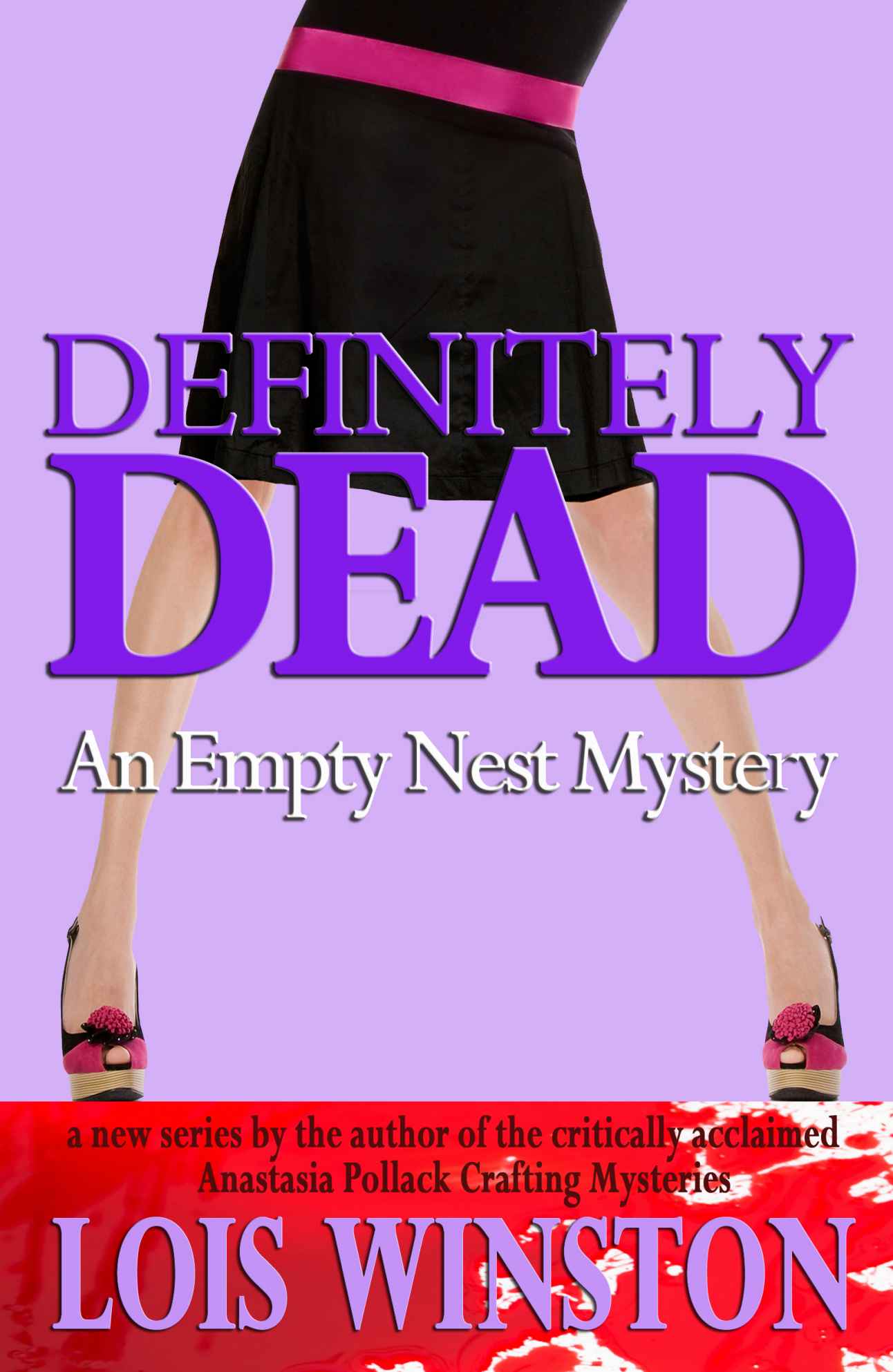 All I wanted to do was sit at my computer and write romance novels while Blake sat across the room and two-finger pecked away at
Pop Goes the Culture
, his epic tome on twentieth century culture and counter-culture and its influences on the media. Or vice versa. It was a real chicken-and-egg sort of thing as far as I was concerned, even if it was my husband’s passion. Anyway, dead bodies weren’t part of our empty nest blueprint.

Book One of the Empty Nest Mystery Series

When her career is outsourced to Asia, fledgling romance author and empty-nester Gracie Elliott wants a job that will allow her time to write. So she opens Relatively Speaking, becoming a wing woman to the senior set. Since her clients need several hours each morning to find their teeth, lube their creaky joints, and deal with lower GI necessities, and they always turn in after the early bird specials, she has plenty of time to pen her future bestsellers.

Gracie deliberately avoids mentioning her new business venture to husband Blake until after she signs her first client. Blake joins the company as a not-so-silent partner, tagging along to make sure Gracie doesn’t cause a septuagenarian uprising. When Client #13 is found murdered in the parking lot behind the Moose Lodge, Gracie knows, no matter how much Blake protests otherwise, she can’t wait around for the police to find the killer if she wants to save her livelihood.

Talk Gertie to Me

Love, Lies and a Double Shot of Deception

Assault with a Deadly Glue Gun

Revenge of the Crafty Corpse

Decoupage Can Be Deadly

Once Upon a Romance

a boxed set of ten romances by ten authors

a boxed set of eleven romances by eleven authors

a boxed set of six romances by six author

Four Uncles and a Wedding

Someone to Watch Over Me

Definitely Dead
copyright 2014 by Lois Winston. All rights reserved. No part of this book may be used or reproduced in any manner whatsoever without written permission except in the case of brief quotations embodied in critical articles and reviews.

This is a work of fiction. Names, characters, places, and incidents are either the product of the author’s imagination or are used fictitiously, and any resemblance to actual persons, living or dead, locations, or events is coincidental or fictionalized.

This one is for my dear friend and cheerleader Janice Boot

Enormous thanks to authors Donnell Bell and Irene Peterson for their critiquing and editing skills and to Mary V. Welk for her medical expertise.

And to my husband Rob who continues to save my sanity when my computer programs are driving me crazy.

“Is he dead?” As I forced the words out around the hand I’d firmly clamped over my mouth to stifle a gag reflex, I inched away from the body sprawled at my feet. The blood pooling beneath Client Number Thirteen, one Mr. Sidney Mandelbaum, followed me, creeping along the asphalt like some B-movie sinister slime out to get me.
Euw!
I jumped to my left to avoid contact.

Blake crouched into a catcher’s position, felt for a pulse, and nodded. “Definitely dead.”

I backed up another step. “You’re sure?”

“Bashed-in skull. Knife sticking out of his heart.” He turned his head and spoke to me over his shoulder. I noticed his skin had taken on a slightly green tinge, but maybe that was a trick of the halogen lights that had switched on to illuminate the twilight-bathed parking lot. Or maybe it was a reflection of my own queasiness. “Yeah, Gracie, I’m sure.”

Green tinge not withstanding, both Blake’s eyes and the quirky slant of his mouth conveyed
The Look
, the one he saves exclusively for me. And just so there wasn’t any doubt in my mind,
The Voice
accompanied
The Look
.

When I met Blake, he was researching early Fifties television. Although he won’t admit it, I suspect he was first attracted to me because I reminded him of Gracie Allen. Along with a shared name, I bore an uncanny resemblance to the comedienne, including the eerie coincidence of having one blue eye and one green eye. The one difference being that although we were both born dark brunettes, the other Gracie had opted to go blonde.

Most importantly, though, like Gracie Allen, I tend to segue into slightly off-kilter rambling discourse that always makes sense to me but not necessarily to anyone else. The difference? Gracie Allen was acting; I’m not.

Now, after a quarter century of marriage, I’m still a brunette, although a slightly weightier one, still rambling to the tune of my own off-key and off-kilter symphony, and still Blake’s Gracie. I’m not complaining.

His sarcasm aside, Blake Elliot is as sharp as aged Vermont cheddar. So if he said Sidney Mandelbaum was dead, I believed him. I crept a bit closer. Keeping Blake between Sidney and me, I peered over my husband’s broad shoulders. The unfortunate Mr. Mandelbaum lay spread-eagle on the macadam. “Maybe we should have skipped from Client Twelve to Client Fourteen,” I said. “Like the way floors are numbered in hotels and office buildings.”

“Or ours. He said he was coming out for a smoke.” I pointed to the unlit cigar and book of matches floating in the center of a blood puddle. “I’ve got a prospect waiting to meet him.”

“Somehow I don’t think he’s up to it, sweetheart.”

I swatted Blake’s arm. “How can you joke at a time like this? Someone murdered one of our best paying clients.”

Blake raised both eyebrows. “Me joking? What about thirteen?”

“I was serious.” I pointed to Sidney. “This proves how unlucky the number thirteen is.”

Sidney Mandelbaum was a serial
schmoozer
, and if you believed him, a serial
schtupper
. Like many single men his age, he’d entered his second randyhood thanks to the marvels of a little blue pill, which made him a desirable commodity among widows and divorcees of a certain age. And thank God for that because we needed the money. Sidney’s murder was a definite financial setback for us.

The loss of Mandelbaum Moolah aside, Sidney wasn’t just dead. I could fool myself into thinking his bashed in skull might be courtesy of a fall down the steep flight of concrete steps at the back of the Moose Lodge, but natural causes hadn’t plunged a knife into his heart. “Omigod!”

Blake reached for me. “What?”

“What if the killer is still here?” I shuddered, quickly scanning the area for any movement, any lurking shadows.

“Tell her he came down with a sudden case of—”

Blake waved his arms in the air as if he expected someone to slap a logical explanation into his hands. “Of food poisoning. The flu. Menstrual cramps. I don’t know. Think of something. Before she comes looking for you.” He pulled his cell phone from his coat pocket. “I’ll call 911.”

I stared at my normally levelheaded and always logical husband. “Menstrual cramps?”

Blake pointed to the door and mouthed, “Go.”

I wasn’t keen on leaving my husband alone with a dead body and a possibly loitering killer, but I could see the merit in keeping a heavy steel door between Mrs. Ethel Goldenberg and the man I had spent little more than five minutes convincing her to meet.

I ran up the steps as fast as my Kate Spade kitten heel mules would carry me, which admittedly wasn’t all that fast. With a grunt and a yank, I opened the back door and went in search of the double-D cup retired bookkeeper who’d taken Client Number Thirteen’s breath away—that is, while Client Number Thirteen still had breath.

All I wanted to do was sit at my computer and write romance novels while Blake sat across the room and two-finger pecked away at
Pop Goes the Culture
, his epic tome on twentieth century culture and counter-culture and its influences on the media. Or vice versa. It was a real chicken-and-egg sort of thing as far as I was concerned, even if it was my husband’s passion. Anyway, dead bodies weren’t part of our empty nest blueprint.

I’d formulated a seven-step strategy for the next stage of our lives, going so far as to cross-stitch my plan and frame it over my desk because I believed in keeping both eyes on the prize. It’s one of those management mantras they taught us at the mandatory team building retreats I used to attend back when I was gainfully employed as a fabric designer. Who would have thought you could outsource creativity to some Third World nation?