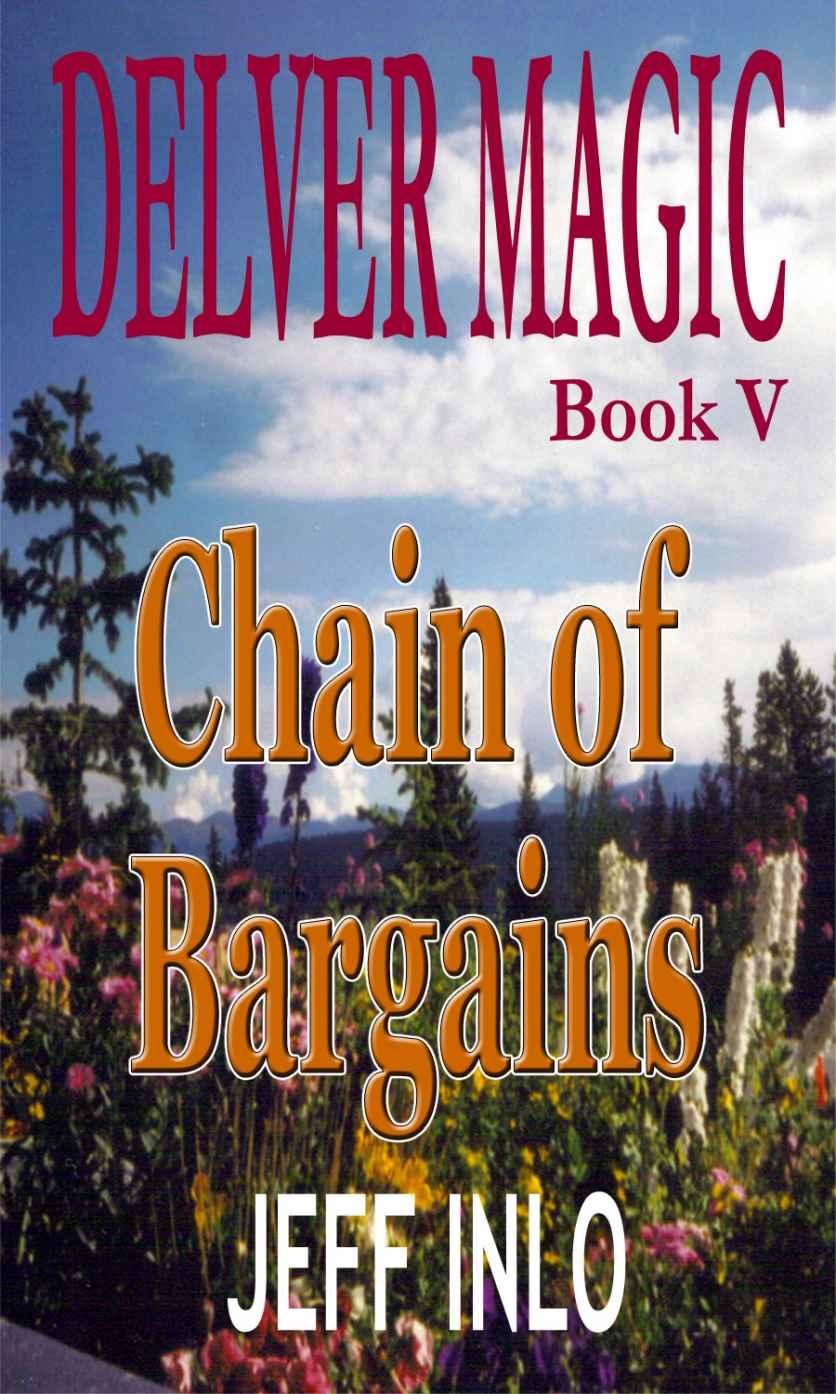 I have tried to make this eBook available in as many formats
as possible. If you encounter any difficulty with the formatting, please let me
know. Contact information can be found on my web site at
www.sitelane.com
.

When Do I See God?
(by Jeff Ianniello)

To Joan, for
helping me find the answers...

and the dog park!

"We still have a cahltof
tracking us," Holli Brances reminded the delver.

"I know," Ryson Acumen
revealed, "but we have a problem ahead of us, too. The pass is being
watched."

"Not human. Not even
goblins."

"Describe what you see,"
Holli requested.

The delver and elf stood near the
edge of a wide path that wound through the lower foothills of the Oachet
Mountains. Their position upon
higher ground on the eastern side of a ridge gave Ryson a clear view of the
pass ahead as it descended into the southwestern region of the Great
Valleys. The delver scanned the
horizon to the east, taking in the entire scene, and then narrowed his sights
upon the unknown group of apparent sentries that waited near the end of the
pass.

Leaf filled trees covered the
majority of the landscape. Most of the ground within the hills was completely
blocked by the swaying, green canopy. The path to the valley, however, was
extremely wide and cut a clear trail through the woods. While weeds and thick
grass grew high within its boundaries, the broad pass remained visible to the
delver as it snaked a passage through the remaining foothills to the east.
Above the trail and nestled within the forest, a few rocky glades rested on
hillsides throughout the region, and it was on one of those clearings that
Ryson spotted creatures with interest in the wide path below.

It was the height of the high sun
season. The days were long with the sun making a high arch in light blue skies,
and while the glare off the hillsides was strong, Ryson's eyes adjusted easily
to the increased light. After pinpointing the exact location of his quarry and
marking points of reference in his mind, he retrieved a spyscope from the pouch
at his side. He focused in on the grouping of several forms, and he detailed
what he could see.

"Thick, sturdy creatures, but
slightly smaller than an average dwarf. About a dozen. Black armor, but it
looks light and flexible. They're not moving much, but when they do, they look
pretty nimble. Very pale skin from what I can see of their faces. I can't see
any hair. Their heads are covered with helmets, but they don't have
beards."

Ryson lowered the spyscope and
considered his findings. He made a quick but fairly decisive conclusion.

Just as Ryson's expression
revealed the seriousness of his declaration, Holli's level of readiness jumped.
Her internal alarms went off with raging clarity. Inferns were dark creatures
of considerable power... and very dangerous.

"How certain are you?"
she requested, not in a dubious voice, but with a tone that marked the gravity
of the matter.

The delver made one last look
through his spyscope and then offered it to the elf.

"I've never seen one, but
I've read about them in the legends. The pale white skin, their size, the
armor... and they're all holding javelins. I'm pretty sure they're
inferns."

The elf did not wish to doubt the
delver, but the presence of inferns was significant. It had to be confirmed and
the delver's description could have matched dwarves that dwelled in the region.
Holli strained her elf eyes in the direction of the pass, but even with the
assistance of magnified lenses, her vision could not match the depth of a
delver's.

Ryson pointed in the proper
direction and gave a verbal description to assist the elf in locating the
sentries.

"They're just above the pass
beyond the second hilltop to our left. They're out in the open on high
ground... very near the peak. There's a small rock formation that looks kind of
like a broken wagon wheel sticking out of the ground that's just below
them."

Finding the proper spot, Holli
could make out only shadows of movement. She could see the figures, but not
with enough detail to confirm the identification.

"They are beyond my sight,
but something is clearly there," she agreed.

"If they're still there when
it gets dark, you'll see them better. They glow hot."

"It's like they have an aura
of heat around them. It's hard to see in daylight, but it's there. I'm sure of
it. Even in the bright sun, I can see it. Their skin is doing more than just
reflecting the sunlight. It's like I said, they have a glow. I think at night
they're going to stand out like flares."

Holli knew it was beyond foolish
to doubt the delver's senses, and she was now certain of the identity of the
figures in the distance. Very few creatures gave off a glow of any sort—dwarves
certainly didn't glow—and only inferns matched the full description given by
Ryson.

"Definitely inferns,"
the elf noted, and then considered the implications.

Holli placed the revelation in
context with both their situation and their mission. They needed to get into
the Great Valleys,
but risking a confrontation with inferns carried great peril. It was a risk
that altered her perspective of their ultimate task. She knew she was operating
on limited details, and the reason for their journey was to shed light on
certain mysteries. Inferns, however, only added to the puzzle, and one word
summed up the discovery.

"None of the settlers in
Connel said anything about inferns guarding the passages out of the
valleys," Holli continued.

"I don't think that many
settlers came this way."

"That is true, but why would
they guard
this
pass and not Pride
Gap?"

"I can't say," Ryson
answered, "but I don't think it's a good idea to walk right under
them."

"No, it is not. I have
already disregarded any such tactic."

More than happy with that
decision, Ryson inspected the landscape as he offered alternatives.

"We could break to the
northeast and bypass them by cutting around this next hill. We can take to the
trees. There's plenty of cover."

Holli considered the option, but
then turned to gauge the progress of the cahltof behind them.

The beast began trailing them near
the end of the Osak Plateau and it followed them through the Oachet mountains.
It had been very persistent as well as diabolical in revealing its presence.
The creature wanted its prey to know that they were being followed, to sense
just enough danger so that rest became impossible.

The cahltof wasn't going to let
them escape, that was clearly its intent. It would rely on its incredible
endurance and hope to wear out its prey. It would be a long hunt, but cahltofs
were relentless.

Despite the qualities if its
pursuer, Holli believed they could outdistance it. The cahltof might follow
them through the foothills, but it would not enter the lower regions of the Great
Valleys where humans were much more
common. She was certain the monster remained out of striking distance but
believed it was closing. She had sensed the creature through the magic, but
only barely, and she had to augment her senses with a deliberate spell.

Turning back to the inferns, the
elf attempted to trace a magical signature back to the figures in the distance,
but she could not reach that far without actually casting another spell of her
own to actively follow the magic. She did not wish to take that chance and
alert the inferns to her presence. It was better to remain silent and unseen.

"Why inferns and why
here?" the elf asked aloud, as she wrestled with the implications. "It
makes no sense."

"Maybe it does," Ryson
offered. "If goblins are settling in the Great
Valleys, why wouldn't inferns? If
they are, they would want to guard the passes. Wouldn't elves do the same thing
in Dark Spruce?"

"Yes, but elves are trained
to be guards. We watch passages to protect our camps. Why would an infern wish
to protect the valleys?"

"Maybe it's not so much
protecting the valleys as searching for prey."

"Perhaps, but I still do not
understand the presence of inferns in these hills. They are foot soldiers,
pawns of draevols."

Ryson knew a great deal of the
legends, but he had not yet dealt with a draevol and wished to confirm their
threat.

"Not death, but plague
mages," Holli corrected. "They are demons that cast spells of rot and
decay, sickness and disease. Brown is the aura of their magic, not black. There
is a great difference. The power of death is not in shadow, but in change. The
magic of plague is meant only to weaken and ultimately destroy. Draevols spawn
from the depths of the dark lands, but thankfully they are somewhat limited in
their ability to crossover from one realm to another."

"That's how they're described
in elflore?"

"Yes, and that is also why
they utilize inferns. While draevols are pure demons, the inferns are only half
demon and half gnome. They have little will of their own but make a formidable
army. While draevols cast plagues, inferns utilize fire. They move with speed
and have great endurance, almost as much as a cahltof. My question remains as
to why would such creatures guard this pass into the Great
Valleys?"

"Maybe they've been ordered
to by the draevols."

"We have heard nothing of
demons by the settlers and their presence would be hard to miss."

"No, but the refugees from
the valleys talked about a lot of unsettling things. Draevols and inferns may
be just another part of it."

"Still, this pass is
inconsequential. It breaks over rough terrain and is used mostly by loggers
bringing resources into the Great Valleys."

"Could they be watching for
elves possibly coming out of the trees?"