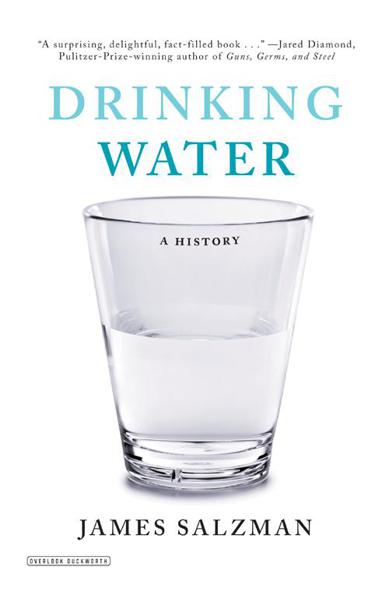 This edition first published in hardcover in the United States and the United Kingdom in 2012 by Overlook Duckworth, Peter Mayer Publishers, Inc.

All rights reserved. No part of this publication may be reproduced or transmitted in any form or by any means, electronic or mechanical, including photocopy, recording, or any information storage and retrieval system now known or to be invented, without permission in writing from the publisher, except by a reviewer who wishes to quote brief passages in connection with a review written for inclusion in a magazine, newspaper, or broadcast.

1
.
The Fountain of Youth

8
.
Finding Water for the Twenty-first Century

T
HE COVER OF THE
A
UGUST
2011
ISSUE OF
Reader’s Digest
features a picture of a glass of water with a question superimposed in bold type: “How Safe Is Our Water?” To make sure the interested reader is left in no doubt, an arrow connects a product warning in bright red type to the glass. The warning says, “
MAY CONTAIN: ROCKET FUEL, BIRTH CONTROL PILLS, ARSENIC, AND MORE SHOCKING INGREDIENTS
.”

The same month’s cover of the trendy magazine
Fast Company
features a head shot of the movie star Matt Damon. No mention is made of his current starring role or love life. Instead, the attention-grabbing title reads, “Matt Damon and His Global War for Water.”

Water has become big news, and not just in corporate board-rooms or city halls. There is likely little overlap in the audiences of
Reader’s Digest
and
Fast Company
(indeed, it would be hard to come up with two titles less likely to be bought by the same person), but editors of both clearly think that their readers care about drinking water. At the mention of drinking water people immediately become engaged. Is it safe to drink tap water? Should we feel guilty buying bottled water? Is our water vulnerable to terrorist attacks? The issues surrounding drinking water speak to a remarkably broad community, and they always have.

The term “drinking water” is a wonderfully ambiguous pairing of words. “Drinking” can be an adjective, describing the many natures of this clear liquid. This water has special, vital qualities. It’s not ocean water, not dish water, not swamp water. It is potable
water—safe enough to consume without getting sick. A rare liquid, one that will become less and less taken for granted in the future.

Or “drinking” can connote an action—a specific intent to drink water rather than freeze water, sell water, wash with water. And if the water is for the act of drinking, then who gets to drink, when can they drink, and where can they drink?

Such ambiguity is entirely appropriate for one of the few human actions and conditions that are truly universal. Some people choose to eat red meat; some eat only fish; some eat no meat at all. But everyone drinks water. And, though a clear liquid, it contains many meanings. While nothing could seem simpler than a clear glass of water, it is difficult to find a more complex or fascinating topic. After all, drinking water is the story of empire. Since prehistoric times, human settlements have been located near safe drinking water. The great capital cities of the world—Machu Picchu, Rome, London, New York—all developed new technologies to ensure safe water for their citizens. A scarce resource, access to water is power. Who gets to drink and who doesn’t? Bloody conflicts over the control of drinking water sources go as far back as the Bible yet are featured on the front page of today’s
New York Times
.

It is bound up in myth, both good and evil. Natural waters have long been viewed as special, with similar tales across distant cultures of eternal youth, passages to the afterlife, miraculous cures, and mystical wisdom. The mythmaking continues today, implicit in the marketing campaigns of many bottled water companies. And it is a central concern of science and medicine. The fields of epidemiology and public health developed specifically to manage the health threats posed by unsafe water. Even today, there is much we do not know about how much arsenic or other contaminants are safe in our drinking water.

Drinking water is the stuff of commerce. There basically was no commercial market for bottled water forty years ago but today bottled water rivals soft drinks for dominance in the multibillion-dollar beverage sector. And drinking water is the story of humanity’s future. The greatest threat to human well-being in the world today is not climate change, AIDS, or warfare. Unsafe drinking
water is the single largest killer in the world. Roughly half of the developing world suffers from illnesses caused by contaminated water supplies.

No surprise, then, that the history of drinking water highlights the most pressing issues of our time—from globalization, social justice, and commerce to terrorism, national security, and technology.

T
HE ORIGINS OF THIS PROJECT GO BACK TO
2004,
WHEN
I
WAS TEACH
-ing a class on the Clean Water Act. As I mused aloud how amazing it was that water treatment technologies now allow more Americans to receive safe drinking water through the tap than ever before, I was caught by surprise. Looking around the room, more than half the students had bottles of water sitting on their desks.
If tap water is safer than ever before
, I thought,
then why is bottled water so popular? What do they think they’re buying?

A fan of Mark Kurlansky’s books
Cod
and
Salt
and other works that tell the history of the world through the prism of a commodity, I searched local bookstores for a popular history of drinking water but found nothing. More than half a dozen books have recently been published about bottled water, inefficient use of water, conflicts over water, or the challenges we face from running out of water, but the drivers for these issues are large-scale water uses such as agriculture, industry, and municipalities. This is the first book to take a broad look at drinking water, how we and past societies have thought about and managed this most vital of all resources.

This book would not be possible without the assistance of many others. I have been greatly helped by many student researchers since 2004: Justin Becker, Ryan Crosswell, Jill Falor, James Gillen-water, Michael Hiatt, Kelcey Patrick-Ferree, Jena Reger, Jonathan Williams, and Gray Wilson. I am grateful for the assistance from Duke’s law library and support staff, in particular Jane Bahnson, Jennifer Behrens, Molly Brownfield, Kelly Leong, Michael Hannon, Carla Reyes, Laura Scott, Katherine Topulos, Sheilah Villalobos, and a special thanks to Dawn Cronce. Duke Law School has been most generous in supporting my research for this book.

My literary agents, Doris Michaels and Delia Berrigan Fakis, have been most helpful in guiding me through the publications process, as has my editor, Dan Crissman. A final thanks is due to John and Elaine Elkington and to Michael Heller for helping prompt an initial musing into a published book.

The book is dedicated to Heather Stanford and was written in memory of my late father, Edwin W. Salzman, and my late brother, David Brook Salzman, both of whom always took a delighted interest and pride in this project and so many others.

N
ESTLED BETWEEN
D
OGWOOD
B
UTTE AND
T
HIMBLEBERRY
Ridge, the Northern California town of McCloud is a simple place: a population of thirteen hundred, no stoplights, one grocery store, and one roadside hotel. It’s also breathtakingly beautiful, surrounded by fir tree forests, some of the country’s best trout-fishing streams, and Mount Shasta looming above it all. For most of the past century, the town has had one and only one business: logging. For all intents, the McCloud River Lumber Company, or “Mother McCloud,” as it was affectionately called,
was
the town. The company owned the grocery store, the hotel, even the houses.

Mother McCloud was a doting parent. The mill supplied electricity for the town, and when a kitchen faucet was leaking or the lights didn’t work, it took no more than a phone call for a crew from Mother McCloud to arrive and set things right. Every Thanksgiving, workers’ families were given free turkeys. At the Christmas party, the curtain was raised at the local theater to reveal a huge mound of presents, one wrapped for each and every child. Life was good.

In the 1960s, the company’s fortunes started to turn, and with that began the town’s slow decline. Homes were sold. Local businesses folded. People moved away. The mill shut its doors in 2002, and former middle-class loggers had to make do with menial jobs and food stamps. The high school, which had once held one hundred
fifty students, now counted fewer than a dozen. The school had not been able to field a football team for years. The huge letters on the side of the gym spelling out “
HOME OF THE LOGGERS
” seemed a cruel joke. McCloud was dying.

Desperate for new sources of jobs, a few members of McCloud’s local government started looking beyond lumber. In what must have seemed a leap of faith, they placed their hope for the town’s future in another plentiful local resource: its water.

Much of the glacial melt from Mount Shasta flows underground and reemerges down the slope. These springs gurgle out clear, bracingly cold water that’s clean enough to drink. Locals have joked that their surprisingly young appearances are due to McCloud’s fountains of youth. New Age voyagers think something is special about the water, too. Some come from as far as Japan to meditate at what they consider a spiritual vortex.

Doris Dragseth ran the local auto parts shop with her husband before retiring. To her and the other members on McCloud’s district board, the idea of water replacing timber must have seemed an odd choice. Spring water had always been free for the taking. Locals just walked up and filled a gallon jug. But times were clearly changing. As soft drink vending machines and supermarket shelves made clear, the bottled water business around the country was booming. In 2011, Americans drank more than nine billion gallons of bottled water—roughly 312 single-serve bottles per man, woman, and child. And the numbers keep climbing. Bottled water is now poised to become the nation’s dominant beverage, surpassing even soft drinks.

To Dragseth, this was clearly a market they should be in. After all, McCloud’s spring water was as good as anything sold in bottles, probably better. The McCloud River Lumber Company was gone for good, but maybe a new Mother McCloud could be found to harvest the local waters. It seemed a long shot at the time, but so did the future of the town.

During the late 1990s, McCloud’s district board tried to woo water companies to build a bottling plant. They had no luck until Nestlé Waters North America, a subsidiary of the giant Swiss food
and beverage company, took an interest. Nestlé, the largest bottled water company in America, already controlled nearly one-third of the market with popular brands such as Perrier, Poland Spring, and San Pellegrino. Nestlé liked what it saw. Large sources of unpolluted spring water with few dissolved minerals—the flat, clean taste that American consumers prefer—have become increasingly hard to find. Some of California’s best groundwater, for example, around Lake Tahoe in the Sierra Nevada mountains, is contaminated with MTBE, an additive that makes gas burn cleaner but is also a human carcinogen.

Hearts at Play (Love in Bloom: The Bradens, Book 6) Contemporary Romance by Foster, Melissa
The Little Bookstore of Big Stone Gap by Welch, Wendy
Just Another Job by Brett Battles
Ready To Go by Mann, Stephanie
Marrying the Marine-epub by Sabrina McAfee
What Remains_Reckoning by Kris Norris
Long Knife by JAMES ALEXANDER Thom
Showjumpers by Stacy Gregg
Dead Over Heels by Alison Kemper
The Throwback Special by Chris Bachelder