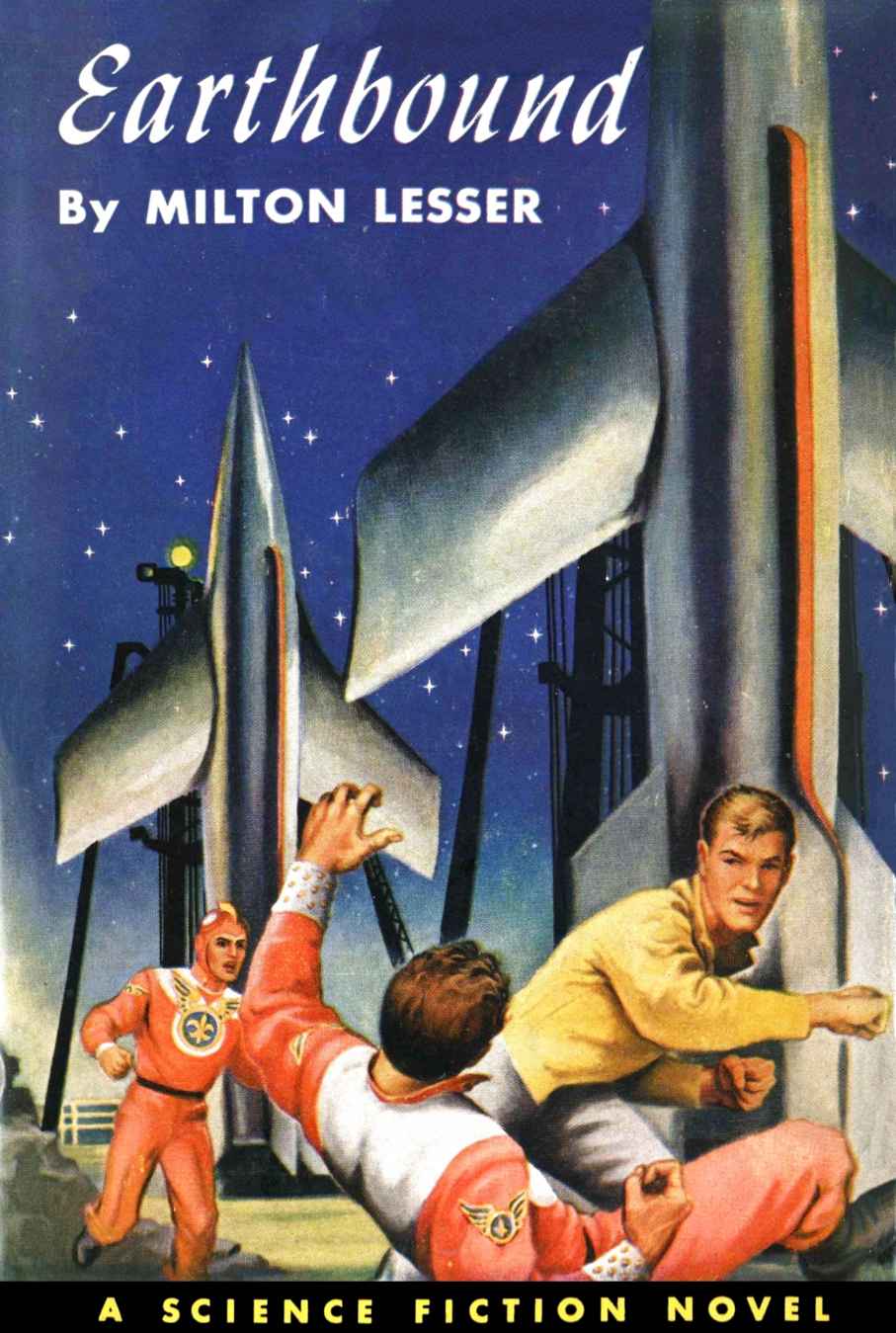 Chapter 3 — Carnival of the Worlds

Chapter 5 — At the Spaceport

Chapter 11 — Beyond the Land of Fire 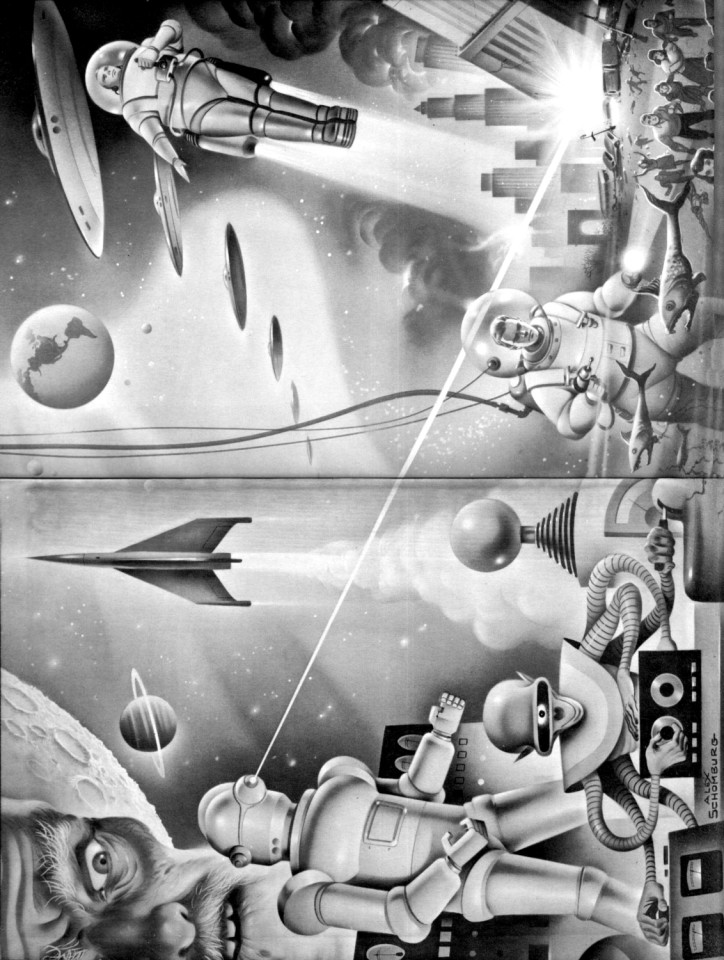 Published by arrangement with Ann Marlowe

Due to the nature of their profession, scientists are cautious people. If this weren’t so, they’d spend their time exploring hopeful but fruitless blind alleys. Yet most scientists and engineers you speak to today will insist that space travel lies no more than fifty years in the future — and many of them are willing to compress that figure to a mere five years!

The first flight to the moon and beyond is within the offing of our lifetime, and surely, as one science-fictionist so aptly put it, "Columbus was a piker!" by comparison. So a glorious new frontier is soon to be opened . . . but it will make all previous frontiers look a lot like your neighbor’s back yard.

We will not speak in terms of hundreds of miles, but of millions.

Arctic cold will seem like a Turkish bath, if you’re on the dark side of the moon.

You’d need earflaps in the Matto Grosso jungle, if you happened to come from the sunward hemisphere of Mercury.

In short, we’re in for some mighty stimulating changes.

Basically, however, one element will remain the same, and that element is man. Of course, life won’t be quite the same after the advent of space travel. The limitless imagination of science fiction will give way to the endless facts of everyday life. Yet man will survive more or less as we know him today. Old emotions will be there . . . naturally, faced with new problems, but the gamut from love through desire and fear to hate will still cover all facets of life. . . .

But high adventure will await tomorrow’s youth as it never awaited any generation before them. And because I believe
Earthbound
is a story of high adventure more than it is anything else, that’s an important thing to remember. The youngsters on the corner won’t play cops-and-robbers any more, but spacers-and-pirates; their older brothers won’t dream of baseball, but of rockets and the far horizons; and you won’t talk of your cousin in Salt Lake City, but in Canal City — which will be on Mars.

And West Point? Well, West Point will be only a quaint historic shrine on the banks of the Hudson. Sure, you’ll be able to visit it on a tourist trip around the vicinity of the little-used Greater New York Port Area . . . but you’d rather inspect the gleaming new Solar Academy, which trains men for the stars. . . .

Pete Hodges groped about the dormitory room in the dim half-light of early morning, found his rain slicker and donned it. He raised a finger to his lips for silence, then whispered, “Are you ready?”

When his roommate nodded eagerly, Pete opened the door and peered out into the hall. The blue night lights cast his crouching shadow back into the room. The hall was silent, deserted. Pete waited only for a moment, looking carefully in both directions, listening to the rain drumming incessantly on the hall window. After that, he stepped out into the hall, aware that Garr MacDougal’s tall, lanky form followed him.

Together, they reached the far end of the hall. They looked anxiously down the escalator well. “Hear anything?” Garr wanted to know.

The two roommates allowed themselves this breach of dormitory regulations once a week. In an hour — at six o’clock — the Spaceport would explode in violent activity. The great, gleaming liners would blast off for Venus, for Mars, for the asteroids and the Jovian moons. Ground crews would scurry about furiously, doing last-minute things. Passengers would wave gay farewells to their earthbound friends and relatives. Cargoes would be loaded — refrigeration equipment for hot, tropical Venus, machinery for Mars, mining tools for the asteroids, hothouse plants for the dome-cities of the Jovian moons.

But Pete and Garr would see all this only as so much background. They would come to see the proud space-liners themselves, and nothing else would matter. The liners of polished steel and quartzite windows, the liners standing on their tails in readiness, pointing straight up at the sky and beyond it. . . .

The roommates splashed and stumbled along the muddy path which led from their dormitory to the athletic field and out across it to the Spaceport highway. Soon they were jogging along the shoulder of the road, watching the jet-cars streak by toward the Spaceport. Panting, Garr related a joke about a frightened Solar Cadet on his first flight, but Pete hardly listened. His thoughts had soared far ahead to the Spaceport and to a day next week when they would receive their rockets. He would keep his emblem polished and wear it proudly on his tunic, and soon after that his home would be out there in the far-distant sky.

They reached the foot of a steep hill where the rain-swollen streams gushed down angrily. Here they left the road to climb the side of the hill. Soon their boots made a sucking sound in the mud, and more than once they tripped in the treacherous footing.

“You would bring me out here on a day like this!” Garr moaned. But he was smiling, and Pete knew he too loved the Spaceport and all that it meant.

Pete clambered up over the last muddy ridge. Ahead of him the hill fell away sharply, almost like a cliff. Below it and stretching out to the horizon was the Spaceport, a broad flat plain of white, dotted with the dark maws of the firing-pits. Beyond these were the clusters of administration buildings, shining brightly even through the rain. And three of the firing-pits were not empty!

“See?” Pete cried, pounding Garr’s back. “See? There’ll be three blast-offs this morning! We might be on one just like them — next week.”

Now they could wait and catch their breath, now they could talk, for according to Pete’s wrist chronometer, it would be half an hour before the first ship thundered away. But strangely, little talk passed between them; the sight of the Spaceport was enough, even through the early morning murk and the rain. What undreamed-of adventures awaited the young spacemen out there in the silent ships? Mars with its rusty, age-old sands, or Venus with its myriads of tropical islands . . . ?

“You mean scared that we’ll be caught? Of course not! Who’ll come out here in the rain, except a couple of crazy Cadets?”

“I don’t mean that,” Pete said. “I mean about next week — after we get our rockets. We’ll be men after that.”

“We’ll be men,” Pete repeated. He ran a hand through his black hair thoroughly drenched by the rain. “Only men can take the ships — up there.”

Softly it came to them, from far away, the muted refrain of the
Spaceman’s Chant
. Tiny dots across the field, the spacemen had emerged from their quarters, and were heading for their ships. They sang as they marched, the words bringing a lump to Pete’s throat:

“We’ll thunder off to Io,

Out in the Jovian Moons.

We’ll feast our eyes and seek the skies

Pete had heard that verse before. He knew them all. With Garr, he joined in the chorus, and suddenly the pouring rain was forgotten.

“Ho! for the void and far away!

And maybe land one day-

Pete heard the footsteps coming closer, sloshing up the muddy hillside. With Garr, he ducked behind an outcropping of rock and waited. Presently someone appeared, called loudly, “Hodges! Hodges, come on out. I know you’re there!”

Garr grunted. “It’s Roger. What the heck does he want?”

Pete knew that every school, and that included the Solar Cadets, too, had its Mr. Unpopular, a student who bullied the lowerclassmen and who made life generally unpleasant for everyone. Here at the Solar Academy it was Roger Gorham. But Pete and Garr had made it pretty clear to Roger from time to time that they wanted no part of him. Then why had he followed them?

Roger snickered. “I hope you guys don’t mind if I tell you that you sure can’t sing. Boy, did you ruin that song.”

“There was an office-gram for you, Hodges.”

“At five o’clock in the morning?”

“I didn’t come out here in the rain to argue with you, Hodges. The office-gram buzzer in your room woke me up, and I couldn’t go back to sleep because no one answered it. I knocked on your door, got no answer. So I walked in. There was this gram, and it said urgent.”

“What else did it say?” Pete asked him.

“Well, I — yeah, I read it. I didn’t want to come out here in this storm if it wasn’t important. But I better not tell you, Hodges. You can go back and find out for yourself.”

Garr, still angry, took a different tack. “How did you know where to find us?”

“Are you kidding? Everyone knows you two come here once a week, even the officers, I think. It’s a big joke.”

Roger shrugged. “Anyway, this gram is important, Hodges. You better hustle on back and read it.”

Pete looked at Garr. “Why don’t you stay here and watch the blast-off?”

Pete nodded and stalked down the hill. The rain had slowed to a trickle and the sun showed signs of rising in the east and bringing up a clear day with it. Roger would not have ventured out in the rain unless, unless what? Roger envied them, envied their grades, their athletic ability, their comradeship. If they were in some kind of trouble, he’d gloat. Now, as they walked back along the edge of the highway, he had a smug look on his face.

The Mortal Knife by D. J. McCune
The Darkest Heart by Dan Smith
The Foreigners by Maxine Swann
Come to the Edge: A Memoir by Christina Haag
All You Need Is Fudge by Nancy CoCo
The Living Death by Nick Carter
The Chase: One Courageous Skipper Battling The Perilous Evil Out To Destroy Him. (Sea Action & Adventure) by Herzel Frenkel
Mala ciencia by Ben Goldacre
Before Midnight by Blackstream, Jennifer
Have a NYC 3 by Peter Carlaftes