Read Every Breath You Take Online

Every Breath You Take 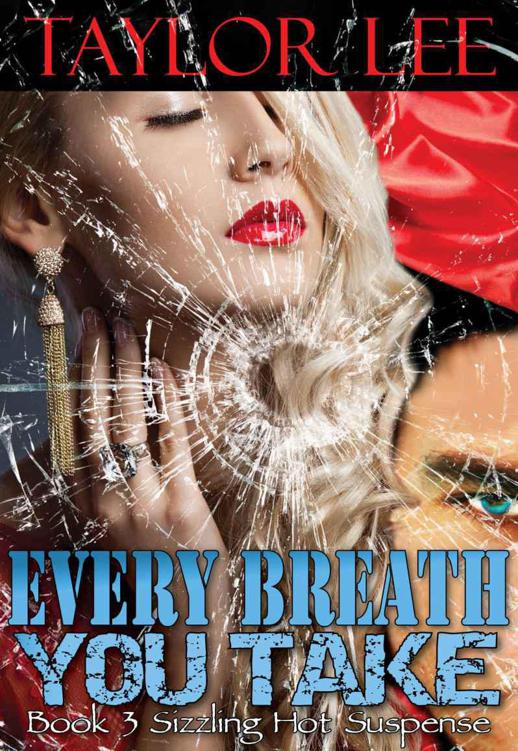 Every Breath You Take

Praise for
Every Breath You Take
…

Book 3 in Taylor Lee’s
The Blonde Barracuda’s Sizzling Suspense Series
that includes the Blockbuster, Best Selling
Big Girls Don’t Cry
and
In the Still of the Night
plus three— soon to be four—riveting Short Stories.

“Dynamite sequel to the Bestselling Sexy Romantic Suspense
Big Girls Don’t Cry
. AND,
In the Still of the Night.
A DOUBLE WOW! Lexie and Jake without a doubt are sexiest special agents ever. A roller coaster of a ride. Disgraceful villains, a riveting plot with so many twists and turns, your head will spin. Romantic Suspense at its best!”

“They call her the Blonde Barracuda. The press loves her, the politicians fear her, and the mob is out to get her! Once again Lexie is in full crusader mode. Now they are closer than they ever have been to taking down the evil men – and women – behind the infamous San Francisco massage parlors.”

“The full cast is here. Loving hard, living hard with an ending that I guarantee you won’t forget. Try adding hot romance with the sexiest couple ever plus non-stop action and you have a book you won’t be able to put down!”

Other Works by Taylor Lee

The crevice between Capt. Dan Rourke’s shaggy gray brows deepened. A sheen of sweat beaded on his upper lip. Dan swallowed hard, his throat muscles visibly clenching at the effort. His voice was gruff, tight with strain.

“You ready for this, Colonel?”

Jake Gardner jerked his head in response, motioning to the burly police captain to pull down the sheet.

Jake sucked in a lungful of air, closing his eyes at the sight. After a moment he stepped back allowing his partners Peter Kim and Brady Schaefer to close in.

Both men gasped at what had once been the face of the woman lying on the steel table.

“The last time I saw something like this was in the Sudan,” Brady choked out.

Jake grunted in response. “Yeah, but even in that barbaric hellhole the Janjaweed made sure their victims were dead. No telling how long she lived after they did this to her.”

Peter’s cultured voice was quiet with rage. “I agree. The Congo is worse than the Sudan, if possible. But one comes to expect this level of brutality from the FDLR. Not in the District in San Francisco.”

Captain Rourke’s strained response underscored his revulsion at the hideous sight. “I’ve never been in the places you men have, but I’ve seen more than my share of atrocities. This is worse than anything I’ve seen the mobs do. Maybe because it’s a woman. And because she can’t be twenty years old, if that.” He paused then added a broken mutter. “Hell, she can’t be any older than my Tammy Jean. And Christ, Tammy is a junior in high school.”

Jake stared at the childlike body that barely covered a third of the examination table. Nodding in agreement, he clapped a hand on the stocky policeman’s shoulder.

“You’re right, Dan. This isn’t a woman, it’s a girl. In her teens.” He stared grimly at the tortured remains. “Not that you can tell from her face, but I presume from her hair and small stature that she’s Korean? From the parlors?”

Captain Rourke mumbled confirmation then gave a disconsolate shrug. “From what the coroner said the deranged fuckers poured on the acid a little at a time. First on her breasts, then in her eyes, then her nose… and… her mouth.” His voice broke. “They saved her mouth for last. Guess they… got off on her screams.”

He struggled for a professional tone. “Dr. Marion said the cause of death was strangulation. Her… her throat closed up when the acid hit her lungs…”

Captain Rourke brushed the back of his hand over his eyes then jerked his head toward the shrouded bodies on the adjacent tables. “Are you ready to look at the other two?”

Glancing at the other tables, an icy chill settled over Jake. He shuddered at the horror the second and third victims must have felt listening to the terrified screams of the one being tortured. Motioning to Brady and Peter to follow him, Jake walked over to the next table. Jake pulled down the sheet and grimaced at the gruesome sight. His revulsion was reflected on his partners’ faces. It didn’t matter how many atrocities the three of them had witnessed in their special operative days, how hardened they were to the sickening cruelty despicable men were capable of. It was impossible not to be affected by the heartbreaking sight of three disfigured girls who’d been tortured to death.

Besides, these young victims were too close to home. Swallowing the gorge rising in his throat, Jake shattered the silence with the ugly unspoken truth ricocheting among them.

“The monsters that drizzled these girls with hydrochloric acid were sending a message, a warning.” He swung his gaze from one man to the next. His voice was soft, contorted with anger and pain. “A message to
us
. More specifically, they were sending it… to Lexie.”

“It had better be. This is it. Your last chance. I am holding you personally responsible for the massacre of fifteen of my trusted soldiers. Worse, that bitch is now a national hero. Fuck, she’ll be on Oprah next.”

“Not after what we did today. Even she won’t continue after today. One thing I can say for her is that she does care about the whores. And even if she doesn’t want to quit, Gardner will pull her back. He’s the most protective son of a bitch you’ll ever meet.”

“Humph! Protective, yes. But also one of the most well-connected operatives in the world. He’s even more dangerous now that he doesn’t have to work within the constraints of the United States military. Not that he ever did…”

“You’re right. But he loves that woman. He won’t want anything to happen to her.”

“Let me repeat. This is your last chance. What you did to those sluts today will be nothing compared to what will happen to you, if you don’t stop both her and Gardner. And I might add, the loss of several million dollars might put a dent in your annual income. But then you won’t be around to spend it—will you?”

The sound of the dial tone buzzing ominously indicated that the bastard had hung up.

Shrieks of laughter and the sound of bodies slamming against the floor and walls of the dojo filled the air. The voices of young children chanting and shouting fierce threats combined with the hissing sounds of practiced forms echoed through the dojo and across the hallway into Master Wan’s office. The four men sat quietly around the conference table. Jake’s throat clenched hearing Lexie’s laughing reminders to the children as she brought the rousing practice to a close. Fuck, what he would do to have this day be like any other. After she finished teaching her classes for the day, Lexie would join him for a quiet dinner and spend the night in his arms—as she always did.

His sigh must have been audible.

Brady responded, “Yeah, Big Guy. What I wouldn’t give to turn back the clock. Just when that strain was beginning to leave Lexie’s face, we have to hit her with this.”

Jake met their gaze and then turned to the solemn elderly Chinese man sitting behind his desk.

“I’m sorry, Master Wan, to bring you such distressing news. Like the rest of us, you have seen barbarous things. But I will tell you, what they did to those young girls after everything they’ve been through, is beyond my comprehension.”

“No, Jake. If comprehension implies understanding, then the acts you describe are indeed beyond comprehension.” He hesitated and took several deep breaths before continuing. “But like you, Jake, and the rest of you, my primary concern is for Alexis, my Jai Li. She is one of the strongest people I know—but also one of the most vulnerable. This will be an extraordinary challenge. I am only grateful that you are here, Jake. Lexie couldn’t have survived Anthony’s death if you were not beside her. In some ways this is worse. Although we all know that it is not Jai Li’s fault, she will take responsibility.”

“Fuck! We all know she will assume it’s her fault. But hell, I feel the same way. Goddammit, I’m the one who helped her find three girls who would talk on camera. “

Turning to the SFPD head of Vice, Peter Kim shook his head. “No, Captain Rourke, it isn’t your fault any more than it’s Lexie’s. Hell, I’m the one who helped her prepare the background video for the City Council presentation. And we all know it is
that
presentation, and the resulting explosion it caused, that brought this retribution.”

Jake leapt to his feet. He pinned a fierce glare first on Peter and then on Dan Rourke.

“Please, Councilman! And you too, Captain. The blame for this barbaric torture is the responsibility of one entity and one entity only. It is the Korean arm of the Sex Trade Ring headed by that fucking son of a bitch, Young-soo. Young-soo and his minions are responsible for bringing hundreds of young girls to this country and more specifically to this city. He and the evil men and women who work for him are solely responsible for this atrocity and so many more. What we need to do now is—”

Jake stopped in mid-sentence hearing Lexie’s voice in the entryway. He glanced out of the doorway and frowned seeing her surrounded by young students all clamoring for her attention.

Lexie laughed at the horde of young girls and boys hovering around her. Though they’d been practicing for over an hour their energy was amazing. It was a credit to her that she had to shoo them out of the dojo. But it was the last class of an arduous day. As much as she reveled in their tireless energy and love of Kung Fu, her tired body told her it was time to send these children home.

“All right, you little leeches. Time to let me go. We’re already ten minutes beyond your practice schedule. But remember. We are testing for belts next week. Sammie, what does that mean?”

A pretty thirteen-year-old girl stepped forward, a self-important expression on her face.

“It means that we all have to practice over the weekend OR we won’t get our stripes.” Showering a haughty gaze on the chubby boy next to her, “That includes my dweeb of a brother. Especially my brother!”

At the shouts from the other students and the insulted protest from Donny, Lexie broke in.

“Now, now, Sammie. Remember, respect for your fellow students is one of the guiding principles of our practice.”

“Yeah, maybe for the others, but my brother
is
a dweeb and he never practices and—”

“That’s enough, Sammie, but you are correct. Master Wan and I will be testing all of you next week. That means that each of you needs to practice your forms and your sparring this weekend and come prepared to demonstrate what you have learned. Do you understand?”

A chorus of childish voices rang out in singsong unison.

Lexie laughed as she shooed the chattering crowd of uniformed children toward the door. Putting an arm around Sammie and the other around a squirming Donny, she added, “And you two, be nice to each other. It is a privilege to have a brother and a sister to practice with. You need to take advantage of that. I expect both of you to earn a new belt next week.”