Read Everything Is Broken Online 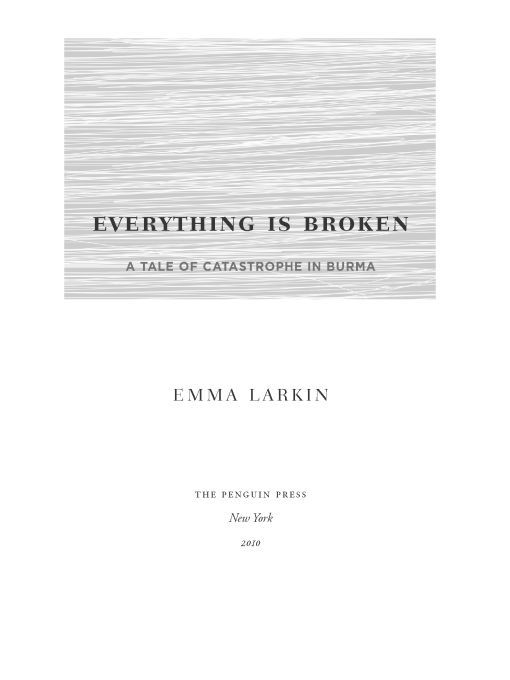 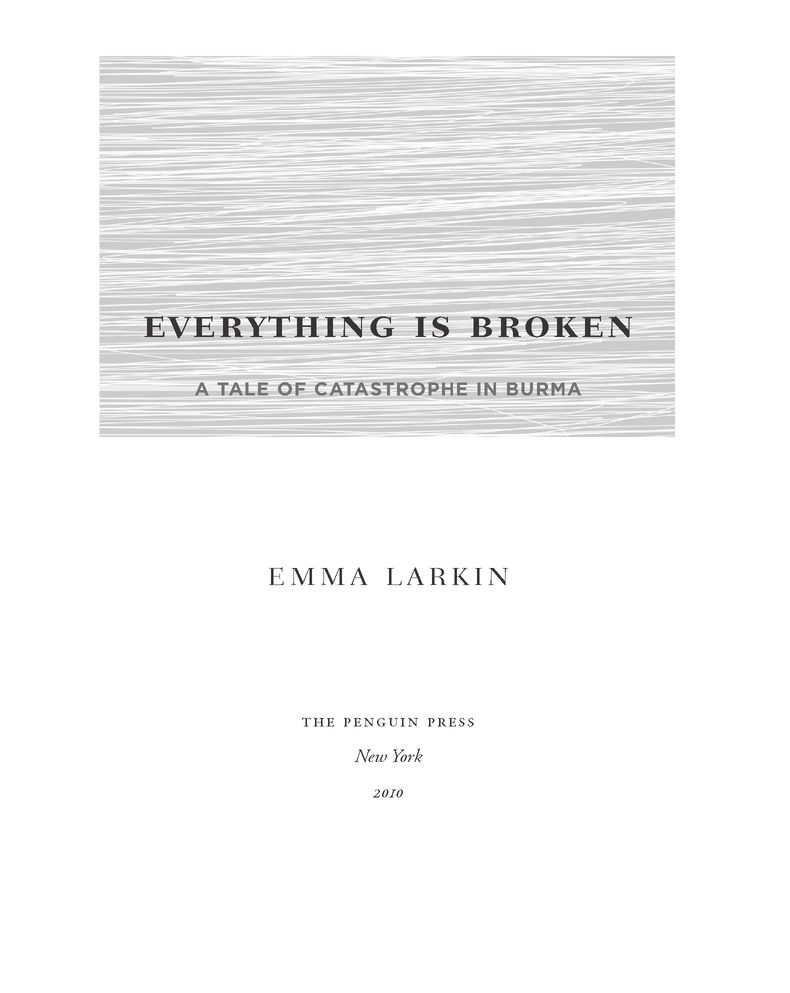 For friends in Burma,
and for Justin

Broken cutters, broken saws,
Broken buckles, broken laws,
Broken bodies, broken bones,
Broken voices on broken phones.
Take a deep breath, feel like you’re chokin’,
Everything is broken.
—BOB DYLAN
AUTHOR’S NOTE
The ruling military regime exerts control over all media in Burma and suppresses any versions of the truth that are contrary to its interpretation of events. As a result, official sources of information are often unreliable; most government statistics and publications are little more than pro-regime propaganda and government staff is forbidden from talking to foreigners without prior permission. Burmese citizens who leak information to international news or other organizations do so under threat of imprisonment.
To research this book, I relied on the same truth-seeking methods used by people living in Burma. In addition to my own experience and impressions, I recorded other eyewitness accounts whenever possible. In order to protect my sources I have had to give people false names and limit certain biographical details that might make them identifiable to the authorities. During meetings in which anti-government sentiments are expressed, names are often not exchanged for reasons of safety and some people mentioned in the book remain anonymous. I also read between the lines of government propaganda, analyzed anecdotal evidence, and took into account the many rumors that are continuously circulating throughout the country. In a place where the truth of events is obscured by heavy censorship and propaganda, rumors act as an alternate source of news and, in some instances, can become as important as hard facts. 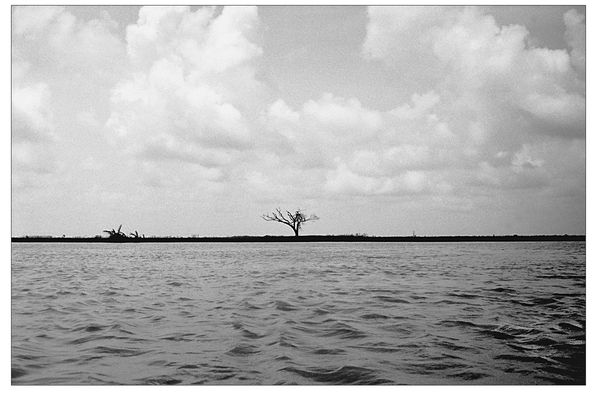 PART ONE
SKYFUL OF LIES
MAY 2008
The soldiers are moving cautiously through the gardens of the Shwedagon Pagoda. They walk in solemn groups of three. The trousers of their dark olive-green uniforms are rolled up around their knees and they are barefoot. They shuffle their feet methodically through the undergrowth, squelching their toes into the mud and grass. Their heads are bowed in concentration, as if in prayer.
The gardens they walk through are in ruins. Palm trees that used to stand straight and tall around manicured lawns are now bowed and broken. Other older and stiffer trees have been wrenched from the ground and lie with their tortured roots exposed above the churned-up soil. There is no longer any semblance of the once lush gardens. The neatly trimmed shrubbery has been ripped to shreds or flattened by fallen trees. The flower bushes have disappeared entirely. But none of this concerns the soldiers as they fan out silently across the gardens.
Looming high above them is the Shwedagon Pagoda, an ancient and massive bell-shaped structure encased in gold—the most sacred and potent Buddhist site in all the land. As the soldiers circle the base of this revered golden mountain, they wield long scythes and use bamboo sticks to rake through the tangled debris. Occasionally they hoist aside a damp log and blinded beetles scuttle out of their way. When they hack through splintered branches, dead leaves are scattered in their wake.
One of the soldiers squats down suddenly, attracted by a flash of glimmering red in the monotonous brown of soil and dying vegetation. The soldier sticks his fingers into the mud and lifts up a clump of earth. The others watch as he uses his thumb to swipe away the dirt and reveal a large, perfectly cut, bloodred gem—a Burmese ruby. Without saying a word, a higher-ranking soldier holds open a drawstring sack. As soon as the ruby is placed inside, the soldier ties a tight knot around the bag and slings it over his shoulder. It lands against his back with a soft jangling noise that seems to indicate it may contain other precious stones salvaged from the gardens of the Shwedagon Pagoda.
The man who found the ruby gets up and wipes the dirt off his hands, allowing himself a secret, triumphant smile. And, together, the soldiers walk on.
ONE
A
few days after Cyclone Nargis made landfall at the southwestern tip of Burma’s Irrawaddy Delta on Friday, May 2, 2008, NASA released a set of before and after pictures taken by satellite.
In the image taken before the cyclone, the delta’s myriad waterways were perfectly etched upon the landscape, like dark and delicate veins. Toward the lower edges of the delta, in the coastal stretches, these veins broadened and merged into the inky blue waters of the Andaman Sea. Large swaths of vibrant green indicated fertile rice-growing land. Deforested areas and urban centers, like Rangoon and its surrounding sprawl of slums, showed up as dun-colored patches. In the delta, towns such as Laputta and Bogale were barely visible amid the pastoral palette of greens, browns, and blues.
The satellite image taken shortly after the cyclone depicted a landscape that had been changed dramatically. The fact that the area around Rangoon was now a marbleized swirl of aquamarine suggested that it was heavily flooded. The waterways of the delta, so distinct in the earlier image, had become blurred and hazy. The blue of the Andaman waters showed up as a luminescent turquoise color that had seeped onto the land, an indication that parts of the delta now lay underwater. Comparing the two images it seemed as if a bucket of water had been sloshed across an ink drawing; the carefully marked lines had been erased and the paper beneath was buckled and distorted.
These images showed that Cyclone Nargis had altered the landscape significantly and caused substantial damage. Yet, in those first days after the cyclone, hardly any news emerged from Burma. The storm severed phone lines and electrical wires, and it was almost impossible to get information from inside the country.
The cyclone had been brewing in the Bay of Bengal for almost a week. When the tropical depression developed into a cyclonic storm, the India Meteorological Department named the storm “Nargis,” a moniker taken from a list of names provided annually by each of the countries in the cyclone band of the Indian Ocean (contributed by Pakistan,
nargis
is an Urdu word for the flower narcissus, which is more commonly known as the daffodil). By the time Nargis reached the coast of Burma, it had grown into a category four storm with wind speeds of up to 135 miles per hour. Cyclones of this magnitude can trigger a storm surge that would be high enough to engulf a two-story house. The storm charted a path across the Irrawaddy Delta, the vast flood basin for Burma’s main river that is populated with hundreds of farming and fishing villages, and directly through Rangoon, the country’s largest city and former capital, before finally dissipating in the mountains along the Thailand-Burma border. With the help of regional and international weather-monitoring services, this much was known.

The Bishop's Boys by Tom D. Crouch
The Peregrine Omnibus Volume One by Barry Reese
Kal Moonheart Trilogy: Dragon Killer, Roll the Bones & Sirensbane by Rob May
Gordon Williams by The Siege of Trencher's Farm--Straw Dogs
The Cutout by Francine Mathews
We're So Famous by Jaime Clarke
Troy Rising 3 - The Hot Gate by Ringo, John
Backstage Pass by Elizabeth Nelson
Night at the Fiestas: Stories by Kirstin Valdez Quade
The Wrong Side of Right by Thorne, Jenn Marie