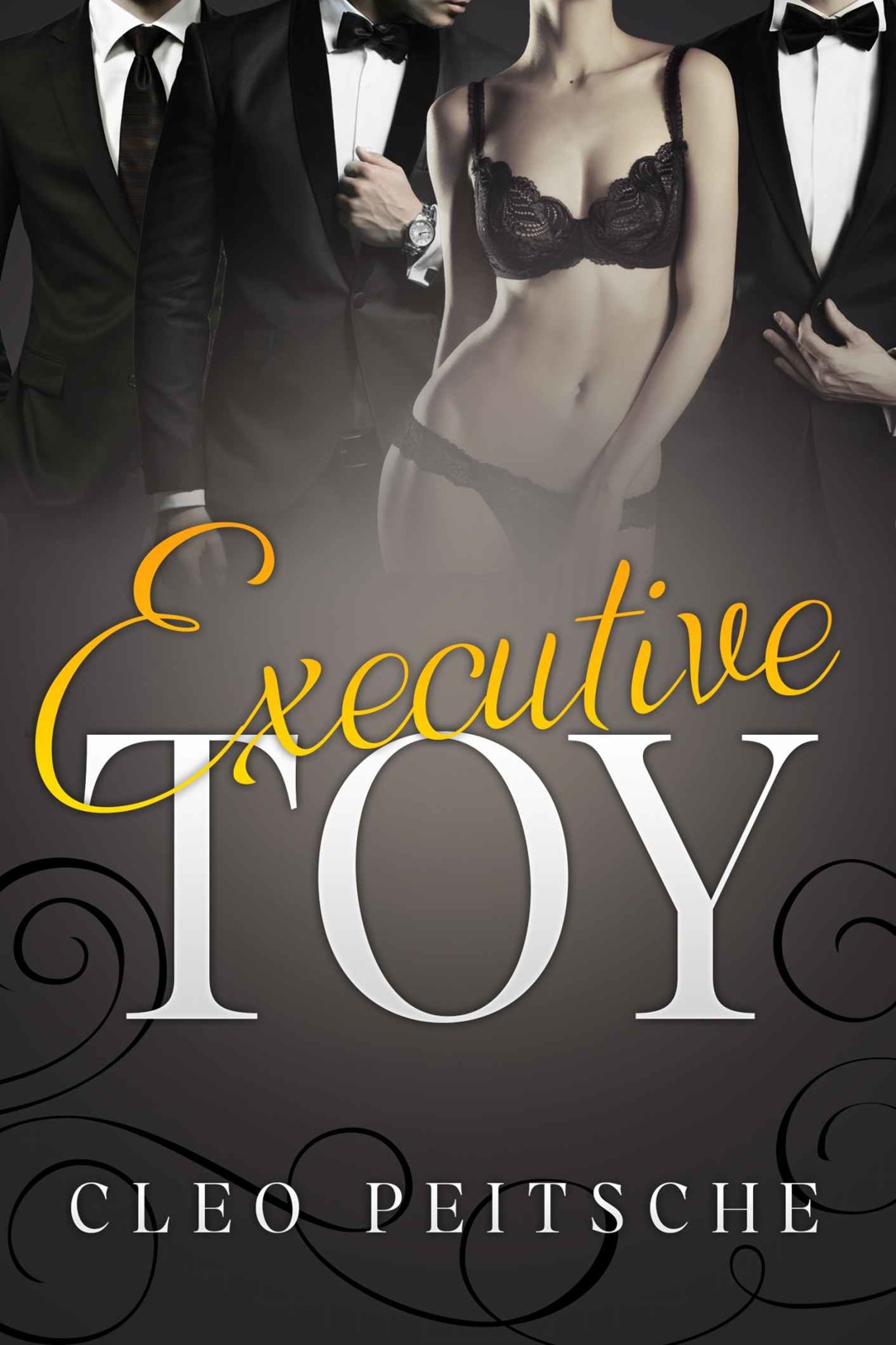 To stay alive, Lindsay has always relied on her looks and her wits. It’s not always enough, and underneath her carefully polished exterior is a desperate woman who will do anything to survive.

When she’s called to account for her misuse of the company credit card, she hopes to flirt her way out of trouble. Instead she finds herself faced with a gorgeous stranger who is immune to her manipulation, and she’s shocked by the punishment he deals out.
No one in the office can tell her who the stranger is, and when she encounters him again weeks later, things take another unexpected turn… times three. Three handsome, rich businessmen. In their arms, she almost feels safe.
But she knows the truth: safe is an illusion, and staying alive is all that matters.

Thanks for stopping by! The order of the books in the "Executive Toy" series is:

EXECUTIVE TOY
© 2014 by Cleo Peitsche. All rights reserved worldwide. No part of this book may be reproduced in any form or by any electronic or mechanical means without permission in writing from the author. This is a work of fiction. All names, characters, events, locations and incidents are either the product of the author’s imagination or are used fictitiously, and any resemblance to any persons, living or dead, events or locales is entirely coincidental. This book is for entertainment purposes only.

This book contains mature content and is solely for adults.

Thank you for purchasing this ebook. I hope you enjoy reading it as much as I enjoyed writing it, and I look forward to sharing more of my stories with you.

Why join my mailing list?
Because I release new stories at a special price to thank my readers!

Other Titles By Cleo

Wanted by a Dangerous Man

Saved by a Dangerous Man

Tempted by a Dangerous Man

Seduced by a Dangerous Man

Dared by a Dangerous Man

Master of the Deep

Blood in the Water (coming soon)

To stay alive, Lindsay has always relied on her looks and her wits. It’s not always enough, and underneath her carefully polished exterior is a desperate woman who will do anything to survive.

When she’s called to account for her misuse of the company credit card, she hopes to flirt her way out of trouble. Instead she finds herself faced with a gorgeous stranger who is immune to her manipulation, and she’s shocked by the punishment he deals out.

No one in the office can tell her who the stranger is, and when she encounters him again weeks later, things take another unexpected turn… times three. Three handsome, rich businessmen. In their arms, she almost feels safe.

But she knows the truth: safe is an illusion, and staying alive is all that matters.

It’s just after 5:00, and I can’t put it off any longer. I push away from my desk and stand, tucking my crisp white shirt into the waistband of my tight navy blue skirt. If I had known that I’d be in trouble today, I would have worn something prettier… more feminine and innocent.

Still, this outfit was good enough to sign one new client in the morning and to re-sign an existing client in the afternoon. That doesn’t beat my record, not by a long shot, but it’s a damned respectable showing.

Nervousness jitters down my skin. Five weeks at Sunrise Imports and I’m already in serious trouble. Now that
is
a record for me. There’s a very good reason I’ve had seven different jobs even though I’m only twenty-three years old, and it’s not because I’m incompetent. When you’re running from your past, sometimes you get to take little breathers… but sometimes you drop everything and go.

I run my fingers through my waist-length blonde hair. Blonde isn’t my natural color, but I wear it like a stop sign. It works with my pale blue eyes and porcelain skin. I’m mostly Irish, but I tell people I’m Swedish. Sounds more exotic.

With a sigh, I stand up as straight as I can. A quick glance around confirms that unless someone is hiding under a desk, I’m completely alone in this part of the office. It’s Friday; my coworkers quietly slipped away already. They all have friends and family to go home to.

Perfect. I don’t want a witness for what I’m about to do.

I throw my arms wide and arch my back, then I suck in a huge chestful of air and force an exaggerated smile to my face. To a casual observer, it probably looks like I’m celebrating, like I’m triumphantly crossing a finish line, the tape streaming over my torso.

According to a sales book I read, this is a “socially dominant” position, and by adopting it for five seconds, I can flood my brain with dominant hormones, whatever those are. I’ve incorporated it as part of my sales routine to build myself up. Doing it makes me feel like an idiot, and it might be a placebo effect, but I swear it works.

I hold the pose for the requisite time, then I tack on a few extra seconds for good luck. The man I’m about to see is a humorless troll. You want to know what he looks like? It’s most easily put like this: Donald Quackk (yes, with two k’s) is the punch line to every joke ever written about accountants.

Head high, I walk briskly down the hallway. Well, as briskly as my tight, knee-length pencil skirt allows. The cheap office carpet feels uneven under my stilettos. I pass the break room and its olfactory cloud of coffee and microwaved popcorn. I haven’t been down this way all day, and the reason for that is because Donald Quackk’s office is just next door.

The door is closed. I hope this means my plan worked, that he got tired of waiting for me and went home, but he was so insistent earlier that I’m not getting my hopes up. He asked me to come by when I arrived in the morning, then he stopped by to repeat the request four separate times throughout the day, each time mopping his brow with a dingy handkerchief.

I know I’ll have to face him eventually, but if I have the weekend, I can figure out a strategy, maybe keep my job.

Mentally crossing my fingers, I raise my hand and knock.

Damn.
I push the door open, my gaze lowered to the floor. This is
not
a socially dominant position, I tell myself, and I jerk my eyes to the desk.

For a moment, everything freezes: the blood in my veins, the whoosh of the central air conditioner, the thoughts in my head.

Donald Quackk is not the man sitting behind his desk. In fact, the man I’m staring at—and oh, god, I
am
staring—is the anti-Quackk, from a parallel dimension where birds swim in the ocean and fish nest in the trees.

He is… smoking hot. That’s not an expression I often use. In fact, this is the first time that assessment has ever crossed my mind. He wears a blue pinstripe suit, a white shirt, and a disappointingly somber tie. But he could be wearing a spacesuit and that wouldn’t hide his obviously broad shoulders. His flawless skin is lightly tanned—from playing sports outdoors, I’m betting. Short dark hair, perfectly styled, completes his look.

My eyes finish roaming his extra-fine body, or what I can see of it, and when I look at his face again I know I’m screwed. Because not only doesn’t his gaze sweep up and down my body in that involuntary male reflex, his eyebrows don’t even move.

The man rises to his feet. Shit
,
but he’s tall. I’m average height without the four-inch heels I’m wearing. If we were standing toe to toe, I’d have to crane my neck to maintain eye contact with this man.

I hold his gaze, annoyance prickling my skin. I’m good at two things in the world. I’ve got pretty solid sales skills, which I’ve worked hard to hone, and I’m attractive. First thing in the morning, maybe just so-so. Ok, ok, it’s pretty rough. But give me twenty minutes with makeup and the right clothes, and I look like a model. Maybe not a fashion magazine cover girl, but definitely not the kind of model stuck handing out pretzel samples and coupons at the grocery store entrance. I make the most of what I have. Not saying I’m everyone’s type, but even men who prefer short, curvy girls usually give me a once-over, and they’re always polite.

This man isn’t planning to be polite. I see it in the entitled tilt of his head.

I kind of want to smack him.

“Where’s Donald?” I ask. It comes out like a demand. When I’m nervous, I get defensive. It’s a weakness, I know, but I’m so rarely nervous that it’s not usually a problem.

“Are you Lindsay?” The rumbling of his voice is make-my-panties-wet
sexy
.

“Depends,” I say before I can stop myself. The man’s chin comes up in surprise, and his eyebrows draw together. His eyes, I notice, are a piercing blue.

“Depends on what?” he asks.

The way he says it, I can’t tell if he’s challenging me, daring me to continue down the insubordinate path I chose without meaning to. The reason I can’t tell is because he sounds curious, and I wonder if he’s actually never heard that response in a movie or a book before.

“Depends who’s asking,” I say. “Where are you from that you don’t know that?”

“Canada,” he says. I can tell from the tightening of his lips that I’ve annoyed him. Well, now he and I are even. “From Toronto. It’s a little city about a four-hour drive from here. I would expect someone with a college degree to know that.”

According to my file, I have a degree from an online university. I actually took a few classes, and they were no joke. Since I can’t tell for sure if he’s being sarcastic or not, I decide to ignore what he said. “Is Donald gone for the weekend?” I ask. “He wanted me to stop by—”

“I’ll be going over your expense account with you in his stead,” the man says. He pulls out a folder from a small stack. There is a bundle of receipts clipped to the inside.

“
Rude
,” I mouth to his lowered head. Aloud I ask, “Is that all Donald wanted? No need to keep you here. I’ll just see him on Monday.”

“We’ll do it now,” the man says. His tone leaves no room for argument. If you’ve ever been sent to the principal’s office, you know exactly what I mean. He’s so confident, so smug, that I want to throw something heavy at him. But I’ve only got one thing handy, which is my smile, and I let him have it.