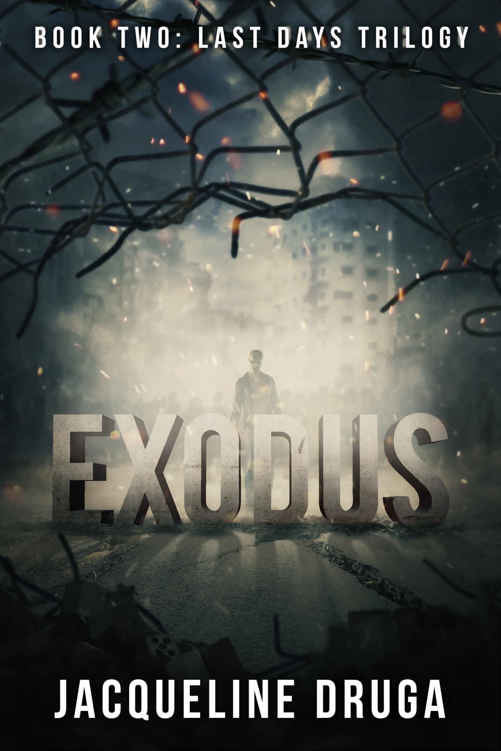 This is a work of fiction. Names, characters, places and incidents are either the product of the author’s imagination or are used fictitiously, and any resemblance to any person or persons, living or dead, events or locales is entirely coincidental.

Thank you so very much to Kira and Shona for all your help with this series.

A special thank you to John P. Rutledge, Michael J. Vaughn and Dead End Street LLC for their extensive editing of the original book. And to DES for giving it its first chance.

It was a nightmare. The only problem was, Marcus Leon was not sleeping. It wasn’t for lack of trying. He would doze off for spurts of time, nothing deep or long enough to actually be called sleeping. How could he? He had the weight of the world on his shoulders and the weight of the building teetering over his head.

The world went crazy. Not as if it weren’t crazy already, but a simple scientific experiment. One Marcus deemed as no more than an experiment became the focus of the world.

Even with his Christian upbringing, ninety percent of Marcus believed the image on the Shroud of Turin wasn’t really Christ. Christianity’s Savior, but a lot of people did. He still wasn’t convinced the image was Christianity’s Savior, but people did. Especially when the clone not only looked like what history depicted Christ to look like, he grew at an astronomical rate and against every scientific explanation.

Whether or not the image on the Shroud was indeed, Christ, the clone was not. He was an imposter, an evil entity who had waited for an opportunity, a vessel, and the body of the clone was a perfect shell for him to slip inside.

Unfortunately, not many saw the ‘bad’ in the clone, like Marcus. They were deceived by him. Marcus was not and made the vow to destroy the clone. He had the means. There was a control in the clone’s DNA and a simple injection would initiate that control and the clone would die.

That was Marcus’ plan. He had every intention of doing so until the explosion destroyed the Westing building and he and Reggie were trapped beneath the rubble.

They had only a few minutes warning and were able to gather some supplies and make their way to the escape route. They were so close to getting out and then boom.

Reggie didn’t project that she was scared, but Marcus, having known her his whole life, knew she was. When Reggie joked, Reggie was frightened. Right there and then, though, Reggie slept. Her head nestled on Marcus’ lap as he sat with his back against a wall. Her last words before she fell asleep were wise crack. They had tried and failed at an attempt to dig out. After some rest, they’d try again.

Marcus wanted to rest, but not only did his mind spin, he was uncomfortable. To his right was a duffle bag, Reggie’s purse and a briefcase. The blanket they had grabbed when they ran out of the apartment covered Reggie. He thought, perhaps if he built an arm rest he could lean on it. Pulling the duffle closer, he propped it next to him, then on top of that the briefcase and then Reggie’s purse. It ended up being the perfect height, until Marcus leaned on it and Reggie’s purse fell. When it did the contents spilled.

Marcus had to reach to clean up the mess. Reggie groaned as if she were complaining.

It was quite a reach to get all the items. Gum, her wallet … make up? He couldn’t even recall Reggie ever wearing makeup.

His fingers grasped on to the expensive smart phone he had bought her for Christmas. The screen was busted and the phone was dark. His own phone had died as well. Just as he had all the items almost back in her purse, he saw it.

“No,” Marcus said out loud, chuckling with some disbelief as he grabbed the flip phone Herbie had bought for Reggie. She never used it, but charged it. Marcus made fun of her for not knowing how to set up something so basic, he promised to show her. In fact, the phone had the cord of the charger still attached and a rubber band held them together.

He undid the band and flipped open the phone. He gasped out a single ‘Ha.’

The phone not only was unharmed, it worked.

“You’re kidding me. A six hundred dollar phone breaks and a ten buck phone from Bargain Mart survives. I’ll be damned.” The first thing that came to his mind was to call for help, but he saw the signal was weak. If he did manage a call, it would drop. He certainly couldn’t text 911, but he could text someone else. Anyone and tell them he was alive. Maybe if someone knew, they would send help.

Marcus’s own phone was busted, and he wasn’t sure if he knew anyone’s cell number off by heart. So before he wracked his brains for numbers, he went into Reggie’s flip phone. Since she hadn’t used it or set it up, he was pretty certain the contact folder would be empty. He was wrong. There was one number in the contact folder … Herbie.

Herbie wasn’t the smartest human being, in fact, Marcus believed most third graders were far more intelligent. But Herbie’s number was in there. And texting a dumb person to find help was better than no one. Pulling on his retro key numeric phone skills, Marcus wrote a text to Herbie.

“Yes.” Rev. Bailey nodded into the telephone. “We’ve got only two more hours. I’d like to be able to go out and redirect traffic.” He nodded. “Sounds wonderful. Get right back to me.” He hung up and glanced at Devante. “Well.” He cleared his throat. “Seems we may be able to move to Soldier’s Field after all. We’ll know in about ten minutes.”

“It’s a coliseum. Our auditorium is packed, and we’ve got mobs of people still trying to get in. But I’m sure you are no stranger to crowds.”

“Good. Can I get you anything?” Rev. Bailey walked over to his desk and sat on the edge. “A Coke maybe?”

“A beverage. It fizzes.”

“In a beverage?” Devante asked. “How do bubbles quench a man’s thirst?”

“It’s the soda pop around it that does that.”

“I am not sure I want to indulge in your... soda pop. Water would be fine.”

“Water it shall be.” Rev. Bailey slid from the desk and walked to the door.

“Before you go...” Devante spoke. “You have enhanced my curiosity. I would like to take a moment to read this New Testament you have mentioned.”

“Why, certainly.” Rev. Bailey walked back to his desk, picked up his Bible, and flipped to the New Testament. He pulled the ribbon marker forward and handed it to Devante. “I’m sure you will find it interesting. It’s sort of like a biography of your life.”

“Then I’m sure I will find it most informative.” Devante took the Bible.

“I’m interested in what you will say. I look forward to it, in fact.”

“I doubt that very much.”

Rev. Bailey felt a sudden chill. He wondered about the remark, but something told him not to ask questions. Who was he to question God?

“Yes, well. I’ll get your water.” He continued to walk to the door and picked at the plant in the box near the door. It was dead. “Seems maintenance forgot this one as well.” He carried it with him, thinking about the fresh flowers. He shivered anew.

The office door closed. Devante smiled and opened the Bible.

To Marcus and Reggie, the drilling and digging was music, a symphony of salvation. They sat on the cold floor, waiting. Herbie had pulled through. After going round and round via text messages with Herbie on why Marcus was using Reggie’s flip phone, Herbie finally got the point.

Reggie smiled and looked up. There was a sound of concrete clunking. “They’re making progress. Remind me to thank Herbie.”

“Um, they’re saving us because of him. So yes.”

“Apparently talking about Herbie is out. So finish telling me about Rose and Tom..”

“As I was saying …It wasn’t like me, that’s all.” Marcus shrugged. “When Rose died, how it could be misconstrued, the circumstances, the cop questioning me. Until the next day, when I got a phone call from the detective again telling me not to leave town...” Marcus shook his head. “Then it dawned on me, I was a suspect. But that wasn’t it. It was a combination of things,” Marcus tried his best to explain. “You helped as well.”

“Yeah. I didn’t think about it at first. You made a comment about Devante being a great illusionist. And then about Tom’s resurrection expiring.”

“I ran some tests. Reg, Tom never actually came back to life. His body, cells, dead. No heartbeat. And yet he walked and talked. I watched him go into rigor mortis. All that was left was his soul. He was still there, mentally, but he couldn’t move.”

“Oh my God,” Reggie said, “he was a smart zombie! And you’re positive about this?’

“I left him there,” said Marcus. “I left Tom in my office. He was there when the building exploded.”

“Maybe the explosion saved him, released his soul.”

“Or damned him. Either way, it seems to prove that Devante is the antichrist. And when I dreamt as much... well, that’s when I decided to liquidate the assets in my Cleveland accounts.”

“Your dream?” Reggie chuckled. “When have you ever based a decision on a dream?”

“Never. But this one made sense. I was a marked man. My father... my father died in the dream protecting me. With that guard lying to set me up for Rose’s death, I made a snap decision. And I’m glad I did.”

“So did Jenny give up the key to your safe deposit boxes?”

“She said she had to find it.” Marcus dusted off his hands. “Which is bullshit. But what can I do?”

“Marcus,” Reggie asked. “Do you honestly think money will be of any value if God’s ending the world?”

“It’s not the end of the world, Reg,” Marcus said with certainty. “And I need the money because I’ll be unemployable. I have to live some way.”

“But, you say Devante is the antichrist.”

“God has no intention of ending the world, Reg. But Devante does.”

“You’re contradicting yourself,” Reggie said. “You say that God’s not ending the world; that Devante is. But that’s exactly what the Bible predicts.”

“True, but,” Marcus held up his hand, “in the Bible, everyone is deceived. Now it’s a different story, because we know who he is. I can bring him down before he destroys us all.”

“Sorry,” Reggie snickered. “So,
you’re
going to bring him down? Aren’t you being a little blasphemous… depicting yourself as the Savior?”

“No!” Marcus snapped. “I’m not saying I’m the Savior. I won’t do it alone. I’ll need lots of help. I have to do it, not as some savior.” He nudged a giggling Reggie. “I have to do it, because I started the whole mess. And I, Reg, have to end it.” He looked up and around at the sounds of the rescue team above getting closer. “But first, we have to get out of here.”