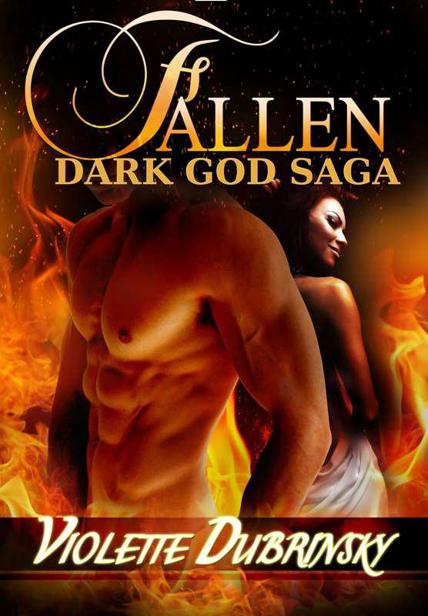 This is a revamped copy of
Fallen: Tale of a Dark God
, previously published by Beautiful Trouble Publishing. The work has been released from its prior contract, and is now solely the property of the author.

All rights reserved. The illegal distribution of this book by any individual or corporation will be deemed fraudulent.

By purchasing this e-book, you agree to keep this copy for your personal use. The author reserves the right to sue for copyright infringement if this copy is redistributed, by upload, email or any other source, or plagiarized.

Any resemblance of characters to people, living or deceased is unintentional. All trademarks herein are the property of their respective owners and used only for the sake of creating a believable work.

To the Readers who followed, encouraged and inspired me from the beginning, and to those who continue to do so. Thank you.

To my Beta-Team, who knows where I would be without you girls? Thank you for supporting all of my ideas, even the ones that made you raise eyebrows, call me crazy, threaten to stalk me, and bake me cookies.

To JJ, Sienna Mynx, and HRKW for the advice and knowledge you’ve imparted when I needed it the most.

And to Priscilla Rainwater, for inviting me to participate in a Halloween challenge that began this saga.

The gods depicted in these tales are interpretations of the author and as such, do not necessarily follow the portrayals in traditional Greek mythology.
Fallen
is the first story of the
Dark God Saga
, the stories of the gods who dwell in Tartarus. It is followed by
Bound
, which is previewed at the end of this e-book.

Aphrodite:
Goddess of Love and Beauty.

Atropos, Clotho,
Lashesis
:
The three Moirae (or Fates) who control the destiny of mortals and immortals alike.

Domain:
The (most times palatial) residence of a god.

Druid:
Child of a human and a god.

Hades:
God of the Underworld.

Handmaiden:
Immortal servant to a goddess.

Hephaestus
: God of Fire and Metal-work.

Hera:
Goddess of Love and Marriage; Queen of the Olympian gods.

Hypnos
: God of Sleep and Dreams.

Incubus:
Male descendants of Lilith, who depend on sexual energy for survival.

Moros
: God of Doom and Destruction.

Oizys
:
Goddess of Pain and Misery.

Pits of Hades:
Fiery tomb for the ‘bad’ in the world.

Succubae:
Male and female descendants of Lilith, who depend on sexual energy for survival.

Succubus:
Female descendants of Lilith, who depend on sexual energy for survival.

Zeus:
Leader of the Olympian gods.

The screech was reminiscent of a banshee, the woman who’d emitted it, worse. Thanatos had barely lifted his head away from the strawberry tipped nipple upon which his mouth was feasting, when she appeared. Aphrodite. The most beautiful of the goddesses, the goddess of love, the fainthearted, humble goddess—. Lies. He imagined she’d seduced some simpering, more than likely human, idiot into regaling people with those tales.

A light snort escaped him. While no one could doubt that Aphrodite was beautiful, with her straight, flaxen blond hair that seemed to never have strand out of place, striking blue eyes, and perfect aquiline features, she was
not
the most beautiful of the goddesses. In a place where beauty was standard, Thanatos found her average. The only reason she’d received that coveted title was because she’d whined and tricked her overindulgent father into agreeing with her. Of course, Zeus had had to deal with the ramifications from the rest of the goddesses, especially Hera, but Aphrodite had not cared. Every being, the gods on high, the gods below, even
humans
, had heard of Aphrodite’s legendary beauty and the title Zeus had bestowed upon her. She was not one for humility.

“Is there a reason you’re in my domain?” Thanatos asked of her lazily, regretting ever bringing her to his home. When she was younger and not as miserable, he’d indulged her curiosity about him, allowing her into the near impenetrable fortress he called home. Aphrodite had been curious about the dark gods; him in particular. Death fascinated her as it seemed disconnected from her elements of love and beauty. Because of his lapse of judgment she was able to enter his living space without triggering most alarms. That and the fact that Hephaestus, the blacksmith god, was her husband, and she’d pilfered some of his powers.

Tossing such thoughts away, Thanatos returned his attention to the woman beneath him. The handmaiden’s lust had faded only slightly, but he could see her nervousness underneath it. Green eyes flicked from Aphrodite to him as she gnawed slightly on her bottom lip.

Leaning down, he kissed her neck while simultaneously shifting his body against her. A lust-filled groan filled the room, and satisfaction tingled up his spine. As one of the dark gods, he took his pleasure from all of the baser pleasures in life, and that certainly included the carnal.

“Stop that this instant!” shrieked the emotional one. Thanatos turned his attention to her once more. Rose pink lips were curled down in an almost ugly snarl, and her hands were clenched into the sides of her virginal white gown. It was cut modestly, with a slight V at the front, long sleeves, and of course  skirts that revealed not even a hint of ankle, instead touching her white slippers.

He lifted a dark brow. Whomever did she think she was fooling? Aphrodite had probably taken the most lovers of the Olympian goddesses, especially as she made it clear she did not share her husband’s bed anymore. Why the goddesses above thought chastity an ideal situation he did not know. Their counterparts certainly did not.

Her face only tightened more. “You—bastard! Why would you?” She turned her attention to the handmaiden under him. “She is not a third as beautiful as I, and she certainly could not give you the type of pleasure I can.”

The woman beneath him whimpered, and Thanatos knew that it was not of pleasure, but fear. Irritated, but not enough of a bastard to put the woman through this, he pulled away from her sweat-slicked body, plopping onto his back. His unsatisfied cock stood tall and proud, undaunted. As soon as he moved, the handmaiden—Rachel he believed her name— scrambled away and began searching out her clothing.

He watched Aphrodite in silence, feeling his anger grow by the second as she continued to glare between him and Rachel, as if she had a right to her anger.

The handmaiden had dressed, and was reaching for the dragon head handles of his dark wooden door when Aphrodite suddenly grabbed her arm, spinning her around. Thanatos was beside them in an instant, easily restraining Aphrodite as she continued her God-awful screeching and the handmaiden ran—for it certainly could not be called a brisk walk—from his chambers.

As soon as the handmaiden was gone, he released Aphrodite and snapped his fingers. The clothing for which he was known appeared on his body, outfitting him in a long dark coat, fitted black pants that left him enough room to breathe, black boots, and of course, a silky black, button down shirt. Unlike his twin, he had no love for colors. Black was practical, and it went along well with his soul-retrieving tasks.

Thanatos ran a hand through his tousled hair, and saw her eyes trace it. Even from where he stood, mere feet away, he could feel the heat of her desire.

“Did you want something, Goddess?”

Electric blue eyes flashed at him. Anger was written there, but lust slowly encroaches as she stared at his lips. “You know what I want.” In a softer voice, she continued, “I know you want me, Thanatos. We both want the same thing. This game has become silly, and I’ve decided to end it. I want you to...take me.”

A sardonic smile split his lips. Were it anyone else, Thanatos imagined that those words might have enticed the dark and primitive side of his being. But alas, it was Aphrodite, and she was delusional. She hadn’t always been like this, but years of being given everything her greedy heart desired had obviously gone to her head.

Stepping closer to her, he saw her eyes widen in excitement and her tongue snake out to touch her lips. Anticipation hummed in the air about her. He stopped when his body was an inch away from her, when her five foot eight frame had to look up to his six foot five. Only then, did he speak.