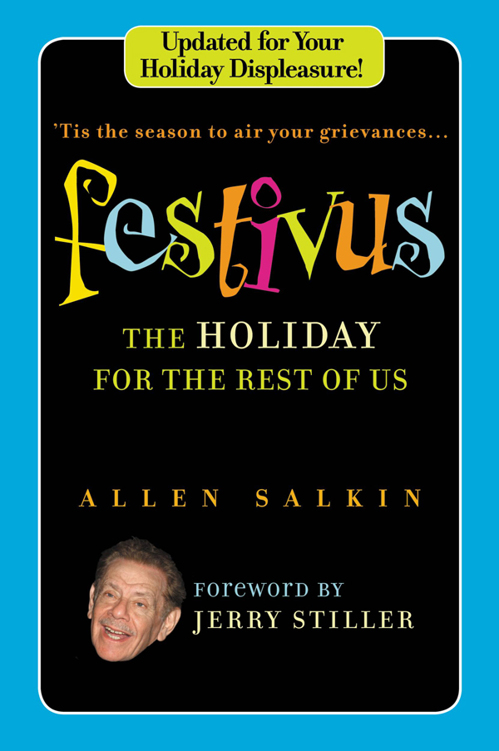 Portions of text in this book appeared in different form in “Fooey to the World, Festivus Has Come” by Allen Salkin. Copyright © 2004 by The New York Times Co. Reprinted with permission.

SECTION 1: The History of Festivus

SECTION 2: Preparing for the Festivus Party

SECTION 3: The Foods and Drinks of Festivus

SECTION 4: At the Festivus Party

SECTION 5: The Songs of Festivus

SECTION 6: Beyond the Festivus Party

For Jay and Toby, true jokesters

I
n the ancient days when gods played their own games, and had their own celebrations, tossing lightning bolts between mountaintops, hurling great boulders—Festivus came out of that. It’s a holiday that celebrates being alive at a time when it was hard to be alive.

There was no Christ yet, no Yahweh, no Buddha. There were great ruins and raw nature. But there was a kindling spark of hope among men. They celebrated that great thunderous storms hadn’t enveloped them in the past year, that landslides hadn’t destroyed them. They made wishes that their crops would grow in the fields, that they’d have food the next year and the wild animals wouldn’t attack and eat them.

There’s something pure about Festivus, something primal, raw in the hearts of humans.

And then there is the idea of an aluminum pole, the centerpiece of the modern celebration of Festivus. Airplanes are made out of aluminum to take you through life from one place to another—in one piece, usually. Aluminum is a type of metal that can say so much if something is done to it, like turning it into an airplane.

But there’s nothing to an aluminum pole. It has no feeling. It says, “I am what I am.” You endow the aluminum pole with whatever you want to. It leaves you open to explore your own meaning. It is lightweight stuff, but in the form of an airplane it gets you from one part of the world to the next. Remember that.

So with these sparks of godly and individual human imagination flying, I say this: A Festivus miracle to me would be not having to give anybody a gift during the time of year we call “the holidays,” and not feeling like I’ve shortchanged anyone or hurt their feelings. The other end of the miracle would be that if I didn’t get a gift from someone I expected it from, I wouldn’t think, “Why didn’t they remember me?” Nope. Just wipe the slate clean.

I mean, most of the time when you get a gift, you have to prove to the gift-giver how much you loved what they gave you. It takes a toll on you. I receive letters sometimes from people describing every little thing about the gifts I’ve sent to them. I don’t even remember what I sent! These people should have more in their lives.

Which brings me to wrestling, another centerpiece of Festivus, the feats of strength. Wrestling is raw, primal. With my own son, I used to tumble around. He always used to come out on top for some reason. He was very agile. I let him win, of course.

Snails are primal, too. It’s no coincidence there is a snail called Festivus. The snail is the ocean. Earth, wind, fire, water, the essential elements. For Festivus, make it: earth, wind, fire, and snails.

That’s why if I’m to air my grievances here, I say: Let’s cut this holidays thing. Let’s cut it down to the bare minimum.

I am not alone in feeling this way, but very few people will actually say it out loud. Then these things like Festivus come along. Something that makes its way onto a sketch on
Seinfeld
or
Saturday Night Live
or another show like that, it comes out of something that’s in the air. It resonates and people run with it.

For some people the revelation comes too late that life is best kept to the essentials. Some people are given their last rites and that person might say in their last breath, “I should have celebrated Festivus.”

Look, I’m not trying to be an anticonsumer Jerry the Curmudgeon here. I’m a Gucci man, a Prada man, myself. I buy gifts from these stores. People have a right to purchase things if they want to.

All I’m saying is, if you celebrate Festivus, you may live a little longer.

You are getting back to the essentials, to the days of gods on mountaintops and howling wolves. Because you are saying the holidays are in the heart, a celebration of being alive with our fellow humans. For that purpose, an aluminum pole will do just as well as anything else—as long as it’s not stuck in the wrong place.

Everything in this book is 100 percent true. This is all real.

The History Of Festivus

M
ost Festivus-friendly people believe the holiday was born December 18,1997, the day the Festivus episode of
Seinfeld
was first broadcast. Those people are wrong.

The TV version of Festivus featured a bare aluminum pole in the place of honor many families reserve for a tinsel-draped Christmas tree, an “Airing of Grievances” in which friends, family, and acquaintances accused one another of being a disappointment, and “Feats of Strength,” requiring that the holiday not end until the head of the household was wrestled to the floor and pinned.

Millions of people loved it—or at least snickered at the holiday with dark pleasure. Within days of that first airing, some early adopters began celebrating their own versions of Festivus, buying poles at Home Depot, wrestling one another, and airing grievances.

Something about the holiday’s anti-cheer was delivering an antidote to the tinselly, tee-hee tyranny of forced joviality that rules the modern holidays. Festivus felt right.

But despite what most
Seinfeld
watchers believed, this was not the first time Festivus had felt right to people. In various forms through the millennia, humans have celebrated holidays called Festivus. A version flourished in ancient Rome. It morphed through the Middle Ages and the Renaissance, and manifested strangely in nineteenth-century California before flowering again in upstate New York in the 1960s. What’s amazing is that through its many incarnations, Festivus has always uniquely managed to express the spirit of its age just as it does now. No one has ever owned it. It is populist. It adapts. Uncontrolled by any ruling power, Festivus just grows.

Some Festivus-lovers may have a hard time believing that the holiday for the rest of us predates the twentieth century. One hopes these philistines are aware there was civilized life prior to television.

If so, let’s briefly (this history lesson will end soon—but history
can
be fun. Think of those movies with revealing togas, indiscriminate conquering, and celebratory swigging from wineskins. This is like that.) travel back to the third century BCE when the Roman comic poet Plautus used the word “Festivus” to refer to wild celebrations attended by common folk. Brian A. Krostenko, an associate professor of classics at the University of Notre Dame, has studied the meaning of Festivus in the ancient world and found that even then it was something that evolved to fit its times.

by Brian A. Krostenko, author of
Cicero, Catullus, and the Language of Social Performance
(University of Chicago Press, 2001)

H
umans have celebrated “Festivus” for at least twenty-two centuries. In ancient Rome,
festivus
originally meant “pertaining to a festal day, a religious celebration.” The word shows up in various forms according to the grammatical rules of Latin:
festivo, festivom,
and many others. For example, in the poet Plautus’s
Miles Gloriosus
(“Braggart Soldier”), one character says,
“Nunc qua adsedistis caussa in festivo loco”
(“Now—to come to the reason why you’ve gathered here in this festal place”).

For most of the year Roman society was hierarchical and restrictive, but on religious holidays—
dies festi
—people of all classes were allowed to gather and express frivolity. From this sprung uses like
festiuom facinus,
“a jolly trick” or “an impish prank” (Plautus,
Peonulus
[”Little Carthaginian”]), and the use of
festivus
as a term of endearment meaning the kind of “agreeable” one can be after a day of wine and song.

The mid—second century was a time of vast social change in the Roman republic. The social elite began throwing dinner parties like the ones they imagined the ancient Greeks had enjoyed.
Festivus
adapted, gaining a satirical spin. Thus in the (alas, fragmentary)
Menippean Satires
of M. Terentius Varrio:

We are jolly and jovial,
so we think.
Though in fact
we stink,
like fetid fish.