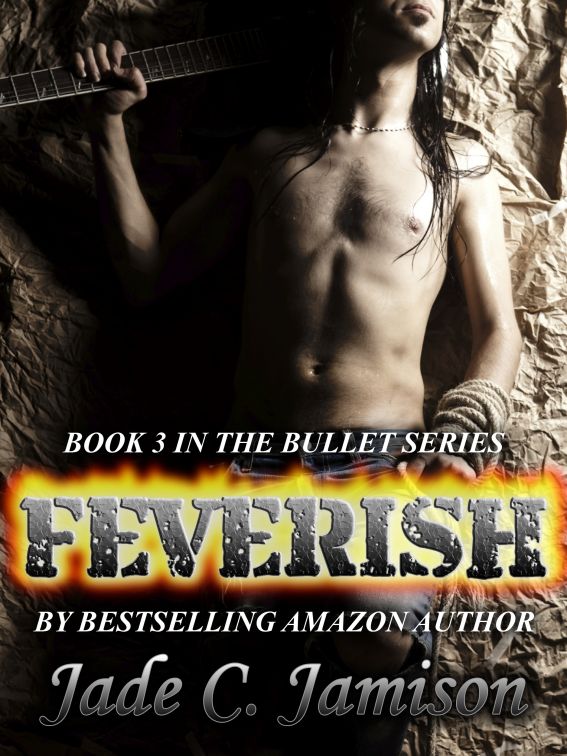 Clayton “Jet” Smith has enjoyed acting the
part of rock star god / incorrigible bad boy since his breakup with
rock goddess Valerie Quinn. He’s racking up quite a score playing
the field, and he has no plans to settle down anytime soon. His
biggest problem these days is meeting his obligations. He’s so busy
having fun, he forgets the important things.

To help him out, he hires recent graduate
Emily Brinkman to be his personal assistant, and he quickly finds a
fire burning in his belly for her. There are two problems, however.
The first is that Emily is engaged to be married, a fact that
leaves Jet unfazed. The second problem isn’t so easy to surmount,
though: Emily is disgusted and unimpressed by both sides of the
man.

Will Clay find a way to persuade Emily to try
him out, not just for one night, but for all time?

Emily cracked the door to Clay’s music room
open and peeked in. He was sitting on the loveseat on one side of
the room, strumming and listening to the sound coming out of the
smaller amp on the floor. Emily walked in. She didn’t know if
leaving the door open would ruin the acoustics, so she shut it
behind her quietly.

She felt better just because of the way he
was looking at her. She knew what she needed. She could feel her
heart thudding in her chest, but she had to force the words out of
her mouth. “I, uh…I need to talk to Jet.”

He squinted his eyes, not fully registering
her words at first. He sucked in a deep breath and stood, resting
his guitar in the stand at the end of the loveseat. “You sayin’
what I think you’re sayin’?”

Her breathing seemed so loud in her own ears,
but she couldn’t make it quieter. She stood and nodded. “Yeah.”

She took a tentative step toward him but he
was in front of her in seconds. She wasn’t quite sure how it had
happened, but it was as though they let the electricity between
them take over. Her arms were around his waist, his hands in her
hair drawing her close, and their lips collided as they gave in to
everything they’d been holding back for so long.

His kiss was deliberate and delicious, his
tongue, warm and smooth but firm and insistent. In those first few
moments, her body primed itself for his touch. In reality, though,
she knew she’d been primed for this man for a long time. She was
just now giving in to her needs.

He pulled back a little and asked, “You sure
you want this?” She nodded. “What about your fiancé?”

“He’s not my fiancé anymore.”

Clay raised his eyebrows. “What about
crossing the employer/ employee line you were worried about?”

3 No Place to Hide

I dedicate this book to the Jade C. Jamison
Street Team.

I would also like to specifically name the
women

on my Street Team who are the “work horses,”
who

really do so much on my behalf: Thank you
to

for all the labor and dedication.

You have taken a huge burden off my
shoulders,

and I appreciate that!

Thank you to the rest of my Street Team—

for your continued support and
enthusiasm.

CLAYTON “JET” SMITH stretched his arms.
Holy shit
, were they sore. It took him a few seconds as he
stirred from sleep to remember why. It was the crazy shit he and
that stacked blonde had been up to last night. Jesus, the things
some women did blew his mind. Last night would be one he’d never
forget…but she’d given him a hell of a workout.

He chuckled quietly thinking about the broken
end table in the living room. His cleaning lady would give him hell
about it, but it wouldn’t be the first broken thing in his house
she would have had to dispose of. He’d have to give her another
bonus.

He froze.
Waitaminute
. He was pretty
sure the blonde was still here, in his house, probably in his
bed.

And he couldn’t remember her name.

He rolled onto his back slowly, his eyes
mostly closed so he could feign sleep if need be.
Just a little
farther.
Yep. She was still there. She remained asleep, though,
so he let out a breath of air. He needed to think through the amber
haze of last night’s whiskey to remember her name.

It was something semi-exotic.
Carmen?
Lucia? Anja?
Hell, there was no way he was gonna remember.
Maybe he could pretend to be asleep forever, and she’d just give up
on him and leave.

No. That hadn’t worked with the last girl.
Maybe instead he’d just go somewhere, and she’d get tired of
waiting for him to return. Or he could call his cleaning lady and
ask her to come over to make sure the girl left.

Nah. Mary hadn’t appreciated it the last time
he’d asked her to do that, even though he’d almost doubled her
weekly salary.

Shit. Well, maybe he could just make nice and
kick the girl out without saying a name. He could get away with it,
right?

Damn straight. He was fucking Jet Smith, lead
guitarist of one of the best goddamned bands on the planet. She
should be happy he let her suck his dick.

Clay almost winced even thinking that. He
loved women. He really did. But he hadn’t felt anything for one in
a long time, not since Valerie Quinn. Well, she wasn’t Quinn
anymore. In fact, she was on her second marriage. Did he regret
losing that woman? Yeah, part of him did, but he’d known they
weren’t right for each other. He’d known it since spying her
expression upon seeing what she’d referred to as his “Wall of
Shame.” Part of Val would always be sweet and innocent, and Clay
hadn’t felt right soiling her with his sordid urges. He loved her
and part of him always would, and he knew that was why it was hard
for him to find any other woman satisfactory.

In fact, most women anymore were like Carmen
Lucia Anja here, a great night in the sack (out of the sack,
actually), someone to pass the time with in a spectacular way, but
Clay couldn’t visualize the future much past a few days.

That was okay, he’d told himself. He was
still young. His band was enjoying a short hiatus after touring for
their third album and he was, for all intents and purposes, famous.
True, most people still didn’t recognize him, but he couldn’t go
out in public without
someone
figuring out who he was. That
made it all worthwhile.

Still, he couldn’t help but feel as though he
were missing something. Part of him felt empty and, even though he
knew what it was deep down, there was no way in hell he was going
to acknowledge it out loud, and he certainly wasn’t going to
meditate over the matter. Instead, he was going to enjoy himself.
He was thirty-two now, still young. His only child was in school
now, but even that didn’t mean he was old. No, his age didn’t have
anything to do with that gnawing feeling in the back of his head.
It was…

Carmen Lucia Anja stirred next to him and
turned her head. She had a big smile on her face. Her teeth were
white, and she was pretty in her own way, but her platinum blonde
hair looked fake in the sunlight streaming through the curtains.
The two centimeters of black roots didn’t help. Her black mascara
and eyeliner were smudged under her eyes. Up close, in bed, in
natural light, he realized that Carmen Lucia Anja was actually his
age. How the fuck had that happened? He usually liked them a few
years younger—not much, but a little.

Her voice should have purred, but it was
raspy. “My God, Jet, you are a tiger.” One corner of her lip turned
up in a smile and she sat up. The sheet fell off her breasts. Those
boobs were obviously fake. They were the size of cantaloupes. He
couldn’t even look at them now. He’d almost suffocated between them
the night before.

He almost shook his head, remembering that.
He smiled and glanced at the clock on the nightstand behind her.
Jesus. It was two-thirty in the afternoon. That was fucking crazy.
He couldn’t remember the last time he’d awakened before nine AM.
Enough was enough.

She giggled and then swung her feet off the
edge of the bed. He sat up too and stretched his neck. She was
screwing around with something next to the clock. Probably a pair
of earrings or something. He used her distraction as an excuse to
find his jeans, but they were nowhere to be seen. Of course. He
hadn’t taken them off in the bedroom. He jumped up and walked over
to the dresser, opening one of the middle drawers and yanking the
top pair of jeans out and slipping into them. When he turned
around, he half expected her to be drooling at his ass, but her
head was bent over the nightstand. Oh, yeah. He couldn’t believe
she had any coke left. He’d completely forgotten about that
shit.