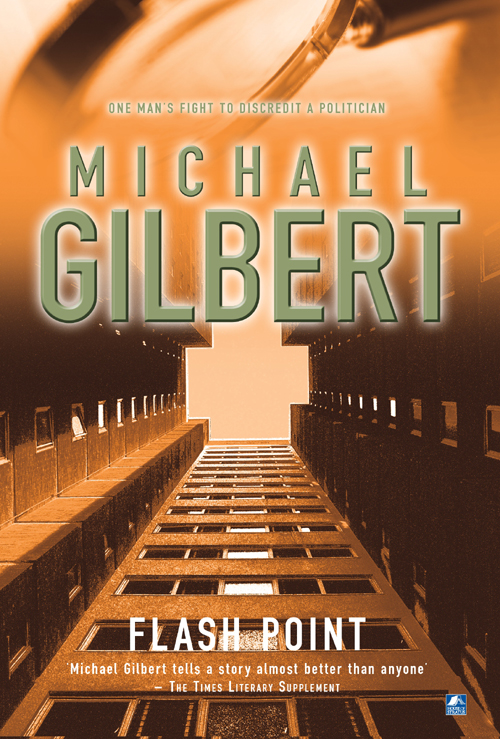 HRF Keating stated that
‘Smallbone Deceased’
was amongst the 100 best crime and mystery books ever published.
“The plot,”
wrote Keating, “
is in every way as good as those of Agatha Christie at her best: as neatly dovetailed, as inherently complex yet retaining a decent credibility, and as full of cunningly-suggested red herrings.”
It featured Chief Inspector Hazlerigg, who went on to appear in later novels and short stories, and another series was built around Patrick Petrella, a London based police constable (later promoted) who was fluent in four languages and had a love for both poetry and fine wine. Other memorable characters around which Gilbert built stories included Calder and Behrens. They are elderly but quite amiable agents, who are nonetheless ruthless and prepared to take on tasks too much at the dirty end of the business for their younger colleagues. They are brought out of retirement periodically upon receiving a bank statement containing a code.

Much of Michael Gilbert’s writing was done on the train as he travelled from home to his office in London:
“I always take a latish train to work,” he explained in 1980, “and, of course, I go first class. I have no trouble in writing because I prepare a thorough synopsis beforehand.”.
After retirement from the law, however, he nevertheless continued and also reviewed for
‘The Daily Telegraph’
, as well as editing
‘The Oxford Book of Legal Anecdotes’
.

Vices necessary in all governments...

So in all governments there are necessary offices which are not only vile, but vicious too: vices which have there a place, and help to make up the seam in our piecing, as poisons are useful for the preservation of health. If they become excusable, because they are of use to us, and that the common necessity covers their true qualities, we are to resign this part to the most robust and least fearful of the people, who sacrificed their lives, for the good of their country, we who are weaker taking upon us the parts that are more easy and less hazardous. The public good requires that men should betray and lie and murder.

In a book which I wrote some years ago about the law I said, “There is no point in concealing the fact that London solicitors work in certain well-known and well-defined areas; nor would much purpose be served by giving these fictitious names.” This did not appear to upset anyone, and I hope that the same tolerance will be extended not only to the lawyers of all branches, solicitors, barristers, magistrates and judges, who feature in this book, but also to politicians and the press. The mention of the holder of an office has no reference whatever to any particular holder of that office, past or present. All the characters in this novel are entirely imaginary. It should also be noted that both the major political parties have their headquarters in Smith Square, Westminster.

The law, with its customary contempt for scientific fact, has decided that June 24th is midsummer day. It was half past six and I was on my way home from work.

The long-range weather forecasters had told us it was going to be the hottest summer of the century, and it was getting off to a good start. When the train crawled out of Liverpool Street the carriage was full and the heat was overpowering. As the journey went on people got out and I was able to move into a corner by the open window and catch some of the breeze which came off the Essex saltings.

It had been quite a day.

When I joined the Law Society, as an assistant solicitor, four years after qualifying, all my friends said I was mad. Maybe I was. I realized there would be snags. Most of the people I dealt with would be older than myself, and would be suspicious of a young man who had abandoned the hard slog of practice for a seat in the bureaucracy of the law.

What I had not appreciated was how awkward solicitors could be as a bunch. It’s the same with doctors. Take them singly and they’re nice enough. Lump them together, in some sort of professional organization, and you’ll find out how quickly they discard their bedside manner and behave like a herd of bullocks. Ask anyone who works for the BMA.

I was one of eight solicitors in the Professional Purposes Section, which is the largest section in the Society. It’s important, too, being the one which has the most immediate contact with the members. Laurence Fairbrass, the departmental head, taught me a lot about human nature. We’d had a fair amount of human nature to cope with that midsummer day.

The last of several straws had been a telephone message from Jonas Killey.

When I came out of articles I took my first job with Sexton and Lambard, a big outfit in High Holborn. Jonas, who was ten years older than me, and had been with them for a year or two when I arrived, was told off by Edward Lambard to look after me. I think he welcomed the job, because he had very few friends.

In Lincolnshire, which was where Jonas came from, they have a word ‘clench’. It means just what it sounds like. Rigid, uncompromising, prickly, with a bit of a grudge against life. Sometimes it’s the result of being bullied at school. You spend the rest of your life trying to get your own back on it. Like Wingate.

The train pulled up with a jerk at Senhurst Street. Mutt was waiting for me on the platform, and I promptly forgot about the Law Society and Jonas Killey and Orde Wingate and thought only about how lucky I was to have married her.

It’s no good asking why my wife is called Mutt. It isn’t her name, or anything like it. There is a theory that it was originally Matt, being short for Matilda, and that she was called this either because she had early developed a talent for telling lies, or because she once set her nursery on fire.

The Archbishop of Canterbury was tucked up in a wicker basket on the back seat of the car. His light blue eyes were shut and his round red face, under its fringe of hair, was set in the grave business of sleep. Mutt brings him to the station when she comes to meet me, considering him far too young to be left at home, even for ten minutes, although it was difficult to see what harm he could come to wrapped up like a cigar and tucked into a basket. I think she had once read a story about a cat that had come in and sat on a baby’s face and smothered him.

We had been married for five years, and our second child was, fairly obviously, on the way.

“You poor darling,” she said, “have you had a hellish day?”

“Fairly hellish,” I said. “Let me see. In the morning we had the Ancient Mariner. He’s fun, but he does take up a lot of time.”

“He holds you with his skinny hand.”

“Not his skinny hand. His glittering eye. Then there was Women’s Lib in the early afternoon. And the Mighty Mouse turned up just before tea. And guess what? Just when I was thinking of packing up, Jonas Killey telephoned me.”

“Jonas?” My wife wrinkled her small nose. “He’s a monomaniac. Monomaniacs are dangerous. Did you know that?”

“I don’t think he’s dangerous. But he’s a terrible bore.”

“All monomaniacs are dangerous,” said my wife, steering neatly round a hay cart and waving to the driver as she did so. “They’re mentally lopsided, and sooner or later it makes them topple over. What did he want this time? Was it that thing he used to rabbit on about when he came down to stay with us?”

When I was first married, I sometimes used to ask Jonas down for a weekend. He was a bachelor, with a mother tucked away somewhere in North London, so he was often at a loose end. As a guest I must admit he was no trouble. I don’t think he noticed what he ate, and he went to bed early. His only amusement seemed to be walking – and talking. I went with him, knowing well enough that in the first five minutes he’d be rambling on about ASIA and ACAT and MGM and Will Dylan.

The Health of the First Ladies: Medical Histories from Martha Washington to Michelle Obama by Deppisch, Ludwig M., M.D.
Bedding the Geek Tycoon by Desiree Crimson
Castle of Secrets by Amanda Grange
Cake Love: All Things Payne by Elizabeth Lynx
To Catch a Queen by Shanna Swendson
OMG... Am I a Witch?! by Talia Aikens-Nuñez
London Pride by Beryl Kingston
Dummy of a Ghost (Novella) (Ghost of Granny Apples) by Jaffarian, Sue Ann
Savage storm by Conn, Phoebe
The 10 Things You Should Know About the Creation vs. Evolution Debate by Ron Rhodes