Read Forever After (a dark and funny fantasy novel) Online

Forever After (a dark and funny fantasy novel) 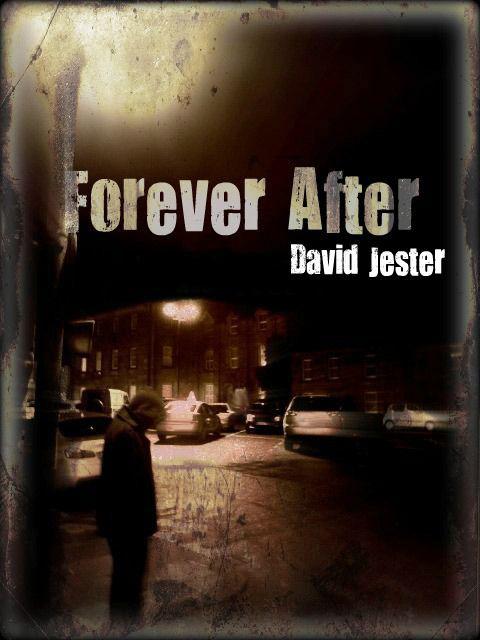 In the darkest corner of the dimmest bar in the dankest town, a man sat in silent rage; his only company a half-filled tumbler of whiskey and a lifetime of regrets.

He mumbled under his breath, pure hatred spilled out of his lips and seethed into hollow grey. He spat and he cursed and he grunted. He stomped his tattered trainers on the sticky floor. He shook his head in bitter insolence. He slammed his fist onto the table.

On the other side of the musty room, beyond a fetid assortment of stools, chairs and odours, an apprehensive bartender watched the actions of this deluded man out of the corner of an ever vigilant eye. He could see the man was hurting, he could see he had a story that he probably needed, and certainly wanted, to impart, but he didn’t want to hear any of it. He wanted the angry man to drink up and piss off so he could shut up shop without any confrontation, putting pay to a long day.

The drunk staggered to his feet; the bartender sighed inwardly. He stumbled forward like a man who has only just learned to walk, his gait unstable, his feet kicking through treacle. He crashed into the bar and used it for support, flopping his pliant torso over a surface that the bartender had been polishing for an hour.

“You married?” the drunken man chewed up his words and spat them out over the bar. Fresh spots of spittle glistened on the polished wood.

The bartender offered him a brief glance and an uncommitted shake of his weary head.

“Best way to be,” the drunk slurred, flopping an arm onto the bar. “Wish I was never married,” he said reflectively.

He tried to rest his head on his hand and after a few slips and a close call with the hardwood surface, he finally found flesh. He stared longingly over the bar. The bartender focused his concentration on cleaning a glass in his hand.

“Name’s Neil,” the drunk propped up his other arm and offered his hand to the bartender, it wasn’t taken. He retracted the gesture but retained his stare: “Want to hear a story?”

“Not the talking type huh?”

The bartender replied without making eye contact, “It's been a long day mate and you’re very drunk, why don’t you finish up and head home?”

Neil retreated. He threw his hands forcefully onto the bar, bruising his palms.

“My money not good enough for you?” he yelled. A deluge of alcoholic odour ejected from his mouth.

The bartender didn’t respond. He didn’t even wipe away the stray spittle on his cheek. His eyes remained fixed on the pint glass in his hand, a glass that was in danger of turning back into sand if he cleaned it any further.

Neil looked ready for action; the anger had boiled up inside of him. He glared at the unresponsive bartender and thrust his finger angrily over the bar, threatening an abusive lecture. Then he paused, halted and instantly cooled down.

“Fuck this!” he spat in exasperation, deciding there was no fun in arguing with a human wall. “I’m going for a piss.”

He took his glass of whiskey with him as he mumbled and stumbled his way to an ammonia drenched bathroom.

At the urinal, still cursing under his breath, he used his right hand to drink whilst his left aided with the task of urination. Dipping his nose into the glass he savoured the smell of the alcohol and eliminated the stench of stale piss and shit that was fermenting in the room beyond the calm amber liquid.

With his attention fully on his drink and his mind on other things, Neil’s heart nearly jumped out of his chest when, from his periphery, he saw a young hooded man standing next to him. He felt his body jump inwardly as his organs tried to leave his skin.

He turned to face the newcomer with an erratic fluttering in his chest.  “Where the fuck did you come from?” he blurted.

The man in the next urinal answered in a mechanical voice without lifting his head. “I’m sorry if I scared you.”

Neil felt his heart settle down. His tensed muscles relaxed.

“You didn’t,” he assured, not wanting to expose his previous panic.

“Can you stop pissing on my shoes then?”

“Shit,” Neil snapped, steering the offending arc of urine away from the young man’s trainers and aiming it back towards the urinal. “Fucking...shit,” he said, laughing slightly “you should have, I mean -- fuck,” he chuckled.

Neil urinated with a smile plastered on his face. He finished in a hurry -- too bored and careless to wait for the final drops to release, happy with them soaking into his pants. “So, you live around here?” He turned to the next urinal but the strange man with the wet trousers had disappeared.

Neil shrugged to himself, wiped his hands on his trousers and headed back out into the bar. Spying the man whose shoes he soiled at the far end of the room he sauntered over, shooting a look of disdain at the indifferent bartender on the way.

The back of the room was lit only by a small bubbling fluorescent, positioned above a tacky, dusty and generic landscape painting on the wall. The man was reading -- the title of the book was short and pointlessly generic enough to indicate a mass-market thriller.

Neil sat down opposite the reader, plonking his weight down heavily, audibly sighing and grunting as his backside crushed against the thinly padded bench.

The man didn’t look up; the bartender clearly wasn’t the only person intent on ignoring Neil.

Neil coughed to clear a glob of dehydrated mucus from his scorched throat, and then, in a scratchy tone, asked: “You not drinking?”

The reader casually turned a page in his book before replying: “No.”

Neil stared into his averted eyes. His intuition had drowned in a sea of alcohol, but enough of it remained to warn him against close contact with the man. There was something strange about him, something off. He didn’t seem the aggressive sort, he didn’t look like he possessed any anger at all, but there was
something
behind those impassive eyes. Or maybe it was the fact there seemed to be nothing behind those eyes that fired so many warning signs in Neil’s mind.

“Go on,” Neil pushed, ignoring his intuition and finding that the sparse warnings capitulated against the remotest sense of resistance. “It’s on me, what you having?” he looked towards the bar, ready to shout an order.

“You sure?” he persisted, still trying to catch the attention of the bartender who had now moved onto cleaning a spotless shot glass.

“Whiskey? You want some Whiskey?”

Still the reader refused to glance at the alcohol drenched face peering expectantly at him. “No thank you,” he said placidly, turning another page -- the sound of the folding paper audible in the relative silence.

Neil drew his attention from the bar, deflated. Out of eyeshot a relieved bartender continued to clean a pre-polished glass. He took another sip of his whiskey, disappointed to see that the sloshing liquid was nearing the bottom of the glass.

“So, where did you come from?” he quizzed. “I didn’t see you here before.”

The reader turned another page and didn’t utter a word.

“You married?” Neil continued, undeterred. “I bet you’re not, you look too smart for that.” He bent forward; his right eyebrow creased downwards, the corner of his mouth twisted distastefully. “Marriage is for suckers right?” he said in a gravelly pitch.

“If you say so,” came the placid reply.

Neil nodded and leant back on the seat. “I’m married,” he stated.

“That’s a long time,” the reader said, turning another page.

Neil nodded to himself, staring reflectively into the middle distance. “Most of it bad,” he explained. His face twisted in disgust, “And now she’s fucking my best friend. Doesn’t that just make you sick?” he inquired. “I’m Neil by the way,” he offered his hand over the table, a pleasant look on his sweaty face.

The reader looked over his book for the first time. His eyes stared blankly at the extended hand before dipping back to the pages of the paperback. “I’d rather not.”

Neil withdrew his hand and shrugged his shoulders. “Not the touchy-feely type huh? My wife was like that.
Fucking bitch
.” He spat venomously. “But she’ll get what she deserves.”

He reached inside his jacket and fiddled around inside, his fingers prodding and probing. When his hand re-emerged it was grasping a small handgun. He turned the weapon this way and that. His chunky, sweaty fingers toyed with the sturdy weapon.

The reader looked up, acknowledged the weapon and then returned his attention to the book. Unimpressed.

“Three hundred quid this cost me,” Neil said, his inebriated eyes gleaming as they drank in the sight of the gun. “It’s worth every penny. You know what I’m going to do with it?”

“I have an inkling.”

Neil nodded sternly. “They’re both at it now. My wife and my friend; fucking like dogs just a few doors from here. I’m going to give them what they deserve. I don’t give a fuck about going to jail, it’ll be worth it.”

He drank the remains of his whiskey and slammed the empty glass down angrily on the table. A drop of amber splashed the side of the glass and began a depressing descent to the bottom.

“I just need a bit of Dutch courage,” he grunted as the harsh whiskey rolled down his throat.

“You not scared?” Neil quizzed, flashing the gun in front of him, making sure he had noticed it.

“It's fully loaded. Six shots. This
is
a real gun you know.”

Neil stared at the unimpressed man, trying to catch a sense of fear or anxiety hidden behind those dead eyes. He looked hard, studying the lifeless orbs, but found nothing. If he was hiding any fear he was hiding it well.

He climbed lazily to his feet and steadied himself on the table after his legs threatened to give way. He stuffed the gun into his jacket, shot one final look at the side of the bartender’s head and then disappeared out of the pub.

Murder After a Fashion by Grace Carroll
Strontium-90 by Vaughn Heppner
Girl With a Past by Sherri Leigh James
Dark Blonde by Fears, David H.
Alaskan Sweethearts by Janet Tronstad
The Uninvited by Mike Evans
Seizure by Kathy Reichs
What Will It Take to Make A Woman President?: Conversations About Women, Leadership and Power by Schnall, Marianne
From the Fire V by Kelly, Kent David
Rock 'n' Roll is Undead (Veronica Mason by Pressey Rose