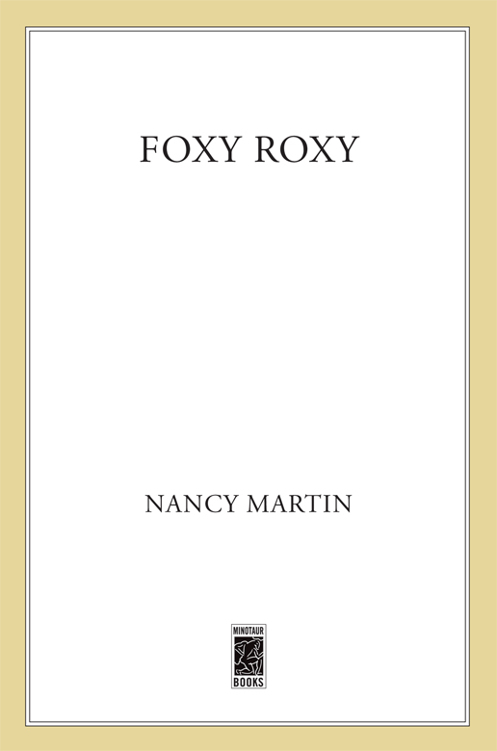 The author wishes to express appreciation and much affection to:

Mary Alice Gorman and Richard Goldman of the Mystery Lovers Bookshop, who are championship booksellers, but Mary Alice really helped me out in a pinch this time.

Nancie Hays, the Gun Tart. Watch out for the rattlesnakes, babycakes.

The rest of the Six get a special shout-out:

Kelly Harms, where are you now? You found Roxy first!

Heidi Lawrence, who provided inspiration as well as a beautiful new kitchen.

Meg Ruley and the team at the Jane Rotrosen are the best, no kidding, and they’re plenty fizzy, too.

I’m new to Team Minotaur, but everybody has made me feel so welcome. Thank you Kelley Ragland, Matt Martz, Sarah Melnyk, Matthew Shear, Tara Cibelli, and cousin Andy Martin.

And many thanks to many more who read, offered expert info or otherwise held my hand, including: Sarah Martin, Jeff Martin, Ramona Long, Paula Matter, Lee Lofland, Cynthia D’Alba, and my Sisters in Crime. I am grateful to you all.

The only witness to the arson was a one-armed marble statue of a naked man with ivy growing where his fig leaf should have been.

Julius Hyde, the sixty-something heir to a massive Pittsburgh steel fortune, had been pouring oysters down the throat of his twenty-year-old manicurist when his wife came home unexpectedly from an Arizona spa. Seeing her husband attend to his pubescent mistress while blowing cigar smoke all over the silk Scalamandré draperies pushed Mrs. Hyde to the brink of insanity. So said the newspapers.

But it was the sight of the couple’s Great Dane, Samson, wantonly sprawled beneath the table so the manicurist could rub his belly with her bare toes that truly pushed Mrs. Hyde over the edge.

She set fire to the house using a Bic lighter and an airline bottle of cognac.

The house and contents were insured for eighty-five million dollars.

Weeks later, when the police and insurance company gave up their investigation and the Channel 4 helicopter quit hovering over the estate, the neighbors began to complain that the burned-out house was a safety hazard.

That’s when the scavengers showed up.

On the evening of October 13, Roxy Abruzzo drove the Monster Truck between the stone gates of the Hyde estate, downshifting and roaring up the cobblestone driveway to the remains of the Norman-style mansion.

What had once looked like a grand French castle was now little more than a ruined hulk. Tattered streams of yellow caution tape left by the fire department fluttered from the shell like the forgotten decorations of a frat party busted by the cops. A blackened swag of wisteria hung from the portico’s crumbled stone arch.

In a city full of grand houses built by millionaire industrialists, this one had been spectacular in its day. Now, it was sad to see it looking so forlorn.

“On the other hand,” Roxy said aloud, “somebody ought to make a buck out of this.”

Happily, she drove under the portico to the back of the house.

Beside the garage, sitting on the dented remains of an overturned washing machine, was her right-hand man, “Nooch” Santonucci. On his lap, he protectively clutched the Dunkin’ Donuts box she’d given him that morning. The box was empty. He was licking the last memory of frosting from his thumb.

Nooch had weighed three hundred pounds back when he played defensive tackle in high school, and he’d gained another fifty since then—all muscle, no additional brain cells. Now he could bench-press a beer truck although he likely couldn’t read the words painted on it—both qualities that made Nooch the ideal employee for Roxy. All by himself he could carry a marble mantelpiece out of an old house, but ten minutes later he’d forget where he’d put it.

“Where you been?” he asked before she shut off the engine. “I been waiting an hour.”

“Easy, big guy. I stopped to pick up some dinner.”

Nooch sat up like a hungry bear catching wind of a picnic basket. “From the restaurant?”

Roxy waved a foil packet out the truck window. “Flynn put out rigs and pigs for the staff meal. He sent some just for you. Look, I even brought you a fork.”

Truth be told, Roxy was so broke she had resorted to pilfering a hearty portion of rigatoni and sausage from the steam table where the kitchen staff at Rizza’s ate before their evening shift. Flynn, the upscale restaurant’s chef, had appeared out of nowhere and caught her slipping out the back door.

“Are you stealing food again?” he had demanded, grabbing the hood of her sweatshirt like he was pulling a troublesome puppy out of mischief. “Damn it, Roxy, you’ve been busting my balls since high school. What am I going to have to do? Beat your butt?”

“Kinky,” she’d said, knowing leftovers would be going to the homeless shelter in a couple hours, anyway. “But I don’t have that kind of time right now, sorry.” She wriggled out of her top layer of sweatshirts and escaped.

Nooch noticed her wardrobe change. “Where’s your shirt? Were you doing something with Flynn you shouldn’t be?” His big ears turned pink at the possibilities. “I wish you two’d just get married,” he said, “now that he’s back in town.”

“You gotta be kidding. Patrick Flynn is the last— Oh, the hell with it. Why am I arguing with you?”

“And you said you’d stop cussing,” Nooch said. “So stop.”

Beside her in the truck, Roxy’s brindle pit bull, Rooney, perched on the passenger seat with his forepaws braced on the dashboard. Rendered blind in one eye long before Roxy rescued him from the pound, Rooney often missed easy targets. But he must have caught a note of Nooch’s voice, because the dog suddenly gave a strangled howl before launching into hysterical barks. His slaver spattered the windshield.

Roxy grabbed his collar and hauled the dog off the dashboard. “Save your energy, fella. By now you know Nooch doesn’t taste so good.”

Rooney swung his big head around to lap her hand lovingly.

Giving Rooney a final pat, Roxy rolled up her window to about four inches and climbed out of the truck. She grabbed a pry bar from under the seat and slammed the door shut before the dog could scramble out. She put the takeout container on the hood of the truck.

“Can’t I have it now?” Nooch asked, crestfallen.

“You’re not finished till I say you’re finished.”

“All right, all right.” Nooch got to his feet. “Look,” he said, continuing the conversation they’d broken off many hours ago. “I been thinking about what you said. About how I should get some character witnesses for my probation hearing.”

“You can’t ask your grandmothers. They don’t count.”

“I don’t think either one’d have anything nice to say anyways. But Father Mike might.”

Nooch didn’t often get ideas all by himself. But she said, “Father Mike’s not a good choice. He’s not a priest anymore, for one thing.” Roxy hated to dislodge Nooch’s good opinion of his former boxing coach. “Besides, he’s your cousin somehow, right? You need somebody who’s not related to you. Also who isn’t a felon, doesn’t carry a gun, and doesn’t work for my uncle Carmine.”

Nooch frowned. “That’s just about everybody I know.”

“Never mind. We just have to expand your circle of friends.”

He scrunched his meaty face in confusion. “How we gonna expand in a week?”

Getting Nooch off probation was one of Roxy’s priorities at the moment. For ten years, since the day he’d beaten Eugene Poskovich to a bloody pulp, Nooch had stuck to the letter of the law—including no associating with known criminals, which was harder in their neighborhood than others. And Nooch had kept a steady job, because Roxy hired him to keep the big oaf out of trouble. She’d pretty much stayed out of trouble herself on his behalf, too. But life was complicated and temptations popped up every day. Getting Nooch off probation would make a hell of lot of things easier for both of them.

Roxy pointed the pry bar at his misshapen nose. “You been behaving yourself for ten years now, right?”

“I guess so.” He must have thought of another small incident they’d managed to keep quiet, because he added, “Nobody really needs a spleen.”

“Right. Well, what matters is you’ve done what the judge told you to do. So now you’re due. Lemme take care of this hearing, okay?”

“But what about character witnesses?”

Nooch’s expression went from misery to relief in a heartbeat. “Thanks, Rox.”

Roxy took a quick inventory of the day’s haul. Lined up in front of the garage leaned a pewter chandelier and the two halves of a soapstone fireplace decorated with twin griffins. About a hundred spindles from the main staircase sat in tidy piles, tied with twine.

The trick to successfully scavenging architectural remnants was to let Nooch do the heavy lifting while she stayed on the move. Roxy best spent her time poking into decrepit houses, befriending little old ladies and lonely old men. She had a list of demolition guys she called every week and a network of antique pickers who kept her in the loop. Over the years, she’d learned to drop her pride around know-it-all yuppies who wanted to get rid of the junk that cluttered up the homes they planned to renovate into
Architectural Digest
splendor. Acquiring the good stuff and selling it off before somebody with better judgment stepped in to screw up the deal—that was Roxy’s gift. Lately, though, she’d been a little down on her luck.

She’d been looking up at the ruined house speculatively. “Let’s take one last look around.”

“Why not? Tomorrow they’re going to blow this place up. Let’s see if somebody forgot anything.”

“I hate it when you get this way.”

“You want a paycheck this week or not?” Roxy could barely afford gasoline for the Monster Truck, let alone Nooch’s pathetic take-home pay. They needed one more score. “C’mon.”

Grumbling, he followed her around the house, past a parking area that was jammed with expensive cars.

Roxy took a look at the lineup. “What is this? The Mercedes dealership needs some extra storage?”

“Must be a convention,” Nooch said, coming up with a line he’d heard before.

The Scribe by Francine Rivers
Stormy Persuasion by Johanna Lindsey
Dante by Bethany-Kris
Only in the Movies by William Bell
Summer Harbor by Susan Wilson
Chase by Flora Dain
Through the Looking Glass by Dawn, Autumn
Chronicles of Athena Lee by T S Paul
The Bridge by Zoran Zivkovic
Study Partner by Rebecca Leigh