Read Getting Freaky With My Roommate Online

Getting Freaky With My Roommate 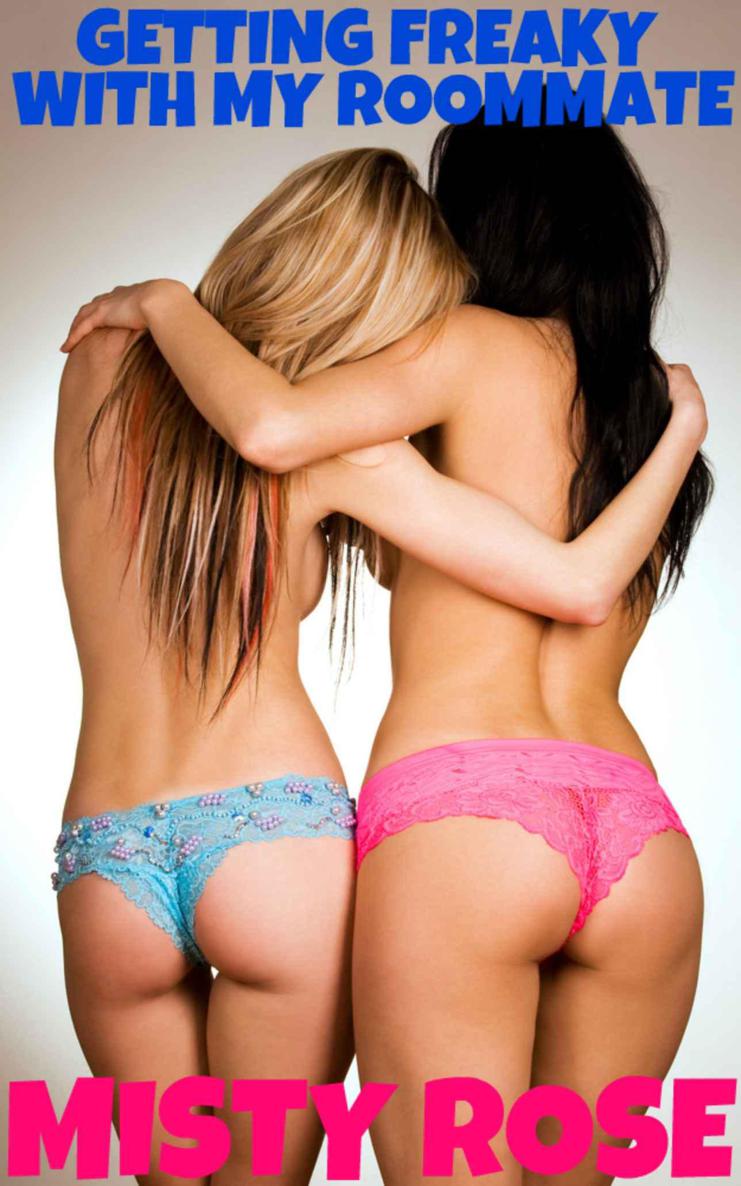 GETTING
FREAKY WITH MY ROOMMATE

GETTING FREAKY WITH MY ROOMMATE

GETTING
FREAKY WITH MY ROOMMATE

My roommate
Penny and I started screwing around with each other shortly after we moved in
together, a little over a year ago.

It had happened
naturally; we were both young, attractive and in our sexual primes. We were
both fed up with men and looking for something more. So we decided to give each
other a shot. And we haven’t looked back since. We still hook up with men from
time to time, and even end up in relationships with them occasionally. But we
never stop fucking each other. It’s just too much fun.

Two years ago if
you would have told me that I’d not only be living with another girl but
fucking her on a regular basis I would have laughed you out of the room.

After all, at
the time I was engaged to (who I thought was) a wonderful guy with a marriage
date set in stone and plans for the future. I’d never even kissed a girl, let
alone slept with one. And I never had even seriously thought about it.

Even after my
engagement fell through (when I caught my fiancée cheating on me) I still never
thought about sleeping with another woman. I went on a six-month sexual binge,
but all with men, fucking as many of them as I could in an attempt to wash the
taste of my scumbag fiancée out of my mouth.

But that was
before I met Penny.

I remember the
first time I laid my eyes on her, about a year after my engagement ended. I was
at a bar in the
Gaslamp
Quarter in downtown San Diego with some
friends when she showed up as part of another group we were meeting up with.

She caught my
eye immediately, mostly because she was my physical opposite. Her hair was long
and blonde hair while mine was short and brown. She had huge, natural,
low-hanging breasts and I had small, perky, high ones. Her soft, slightly
pudgy, face was completely different than my sharply lined features. She was
short and stacked, with an amazingly curvy natural figure while I was tall and
lanky with a body toned daily in the gym.

And the
differences didn’t stop there. Pretty much everything about us was different.

Her
pale skin to my dark tan.
Her blue eyes to my
brown.
Her round, fleshy ass to my narrow, firm one.
And it wasn’t only our looks that were in contrast.

Penny was cute
and bubbly while I was hard-edged and intense. She was talky while I was
reserved. She was nice and I was mean. She was everybody’s best friend while I
scared everyone away.

I figured we
would butt heads like a couple of divas, but as it turned out, we got along
incredibly well. People always say opposites attract but I never bought into
it.

Until
I met Penny.

At some point
during that first night we ended up at the same table, both of us drunk off our
asses and talking at length about our personal lives. I don’t remember many
specifics of the conversation but I do remember that it was mostly about men,
how pathetic and sad they were, how they didn’t know what they were doing in
bed, how the only thing they cared about was pleasing themselves, that kind of
stuff.

Nothing happened
that night but the foundation had been laid. Don’t get me wrong, it’s not like
I knew right then that Penny and I were going to end up fucking on a regular
basis, in fact, it was the furthest thing from my mind. I’d never been with
another woman at that point, and I never really expected to. And Penny felt the
same way.

Hell, we didn’t
even know if we’d ever see each other again after that night.

But, as
circumstances would have it, we did see each other again, the next weekend in
fact, out at a different bar but with the same group of friends.
And the weekend after that.
And the one
after that.

Eventually we
ended up talking more regularly, hanging out occasionally,
doing
things together. Until one day we realized we were best friends.

Shortly after
that, it just so happened that we were both looking for a place to live and it
was natural that we ended up living together. We were like peas in a pod, twins
separated at
birth,
she was the yin to my yang.
Despite our outward differences inwardly we were almost the same person;
neither of us cared about stupid, petty shit. And we both liked men.

Even the first
time we hooked up it was nothing planned. We were both having men problems at
the same time so we decided to have a girls-night out, just the two of us. We
ordered gourmet pizza, bought three bottles of expensive wine, rented a few
chick flicks and locked ourselves in our apartment.

We were drunk as
skunks and had just finished the second movie when the fun started.

We’d been
ripping on men the whole night, each telling stories about how small this guy’s
dick was, or this guy couldn’t get it up, or how this guy was a three-pump
chump when Penny casually said, “Why do we need men anyways?”

“That’s a damn
good question,” I replied. “It’s not like they’re good for anything.
Except for their cocks of course.”

“
Ain’t
that the truth,” Penny said with the exaggerated
inflection of someone who is well and truly toasted. “If they didn’t have those
they’d be totally and utterly worthless.”

“Hell, even
cocks can’t save most of them,” I said.

“You can say
that again sister,” Penny said.

So I did. We
both laughed.

“But seriously,”
Penny said as the laughter died down. “Just imagine if women had cocks. Then we
wouldn’t need men at all. We could replace them completely.”

“What a minute,
what are you saying?” Penny asked. She was trying to sound all innocent but I
knew her too well to believe that
schtick
. She knew
exactly what I was talking about.

“Cocks are the
easiest thing in the world to replace,” I said. “I’ve got three of them in my
room right now, all different sizes. And don’t tell me you don’t have at least
a couple
yourself
. I’ve heard you making noises in
your room when I know you’re alone.”

“What kind of
noises are you talking about?” Penny said, pretending to be offended.

“Are you saying
that you listen to me when I’m playing with myself?”

“Not listening,
per se, but I can’t help but hear you. Not with all that moaning and groaning
you do when you’re in there alone.”

“Does all that moaning
and groaning turn you on?” Penny said. She was still smiling but her tone a bit
more serious now.

She looked at
me. I looked at her. And just like that, it happened. We both leaned forward at
the same time and kissed.

Penny took the
lead, hopping up on top of me and straddling me while we made out.

It was amazing,
kissing another girl, not only because it was taboo but because she was a great
kisser, much better than any guy I’d ever been with. Her lips were soft and
supple, her tongue active but not crazy. She knew just how much pressure to
use, not too much but not too little. I could only imagine how good she’d be
with her tongue in other areas. Hopefully I’d find out pretty soon. But first there
was some other business to take care of.

I put my hands
on her stomach and moved them up under her shirt and grabbed her breasts.

She leaned back
and slipped off her shirt, revealing her boobs in all their glory.
Fat and juicy and hanging low with huge aureoles.
They were
amazing.

“You like my
tits?” she said, bouncing up and down slightly, making them jiggle and shake.

“I fucking love
them,” I said.

Penny smiled and
pressed them together with her arms. “Yeah, they are pretty nice, aren’t they?”

“They’re more
than nice,” I said. “They’re beautiful. Just like you.”

“
Ahh
, aren’t you sweet,” she said. “Deep down, despite your
hard exterior, you’re just a little softy, aren’t you?”

“
Sshhh
,” I said, bringing my finger to my mouth in the
universal sign for silence. “Don’t tell anyone. I have a reputation to uphold.”

“Don’t worry
Kendra,” Penny said. “Your secret is safe with me. I won’t tell a soul.” Her
voice lowered to a conspiratorial whisper.
“Provided you do
something for me, of course.”

“Anything you want,”
I said.

“I was hoping
you’d say that,” Penny said. Then she leaned forward and thrust her tits into
my face. “Well,” she said. “What are you waiting for?”

So I started to
play with one of them, fondling and licking it, slowly moving my tongue over her
nipple a few times before clamping on it and sucking it until it got hard.

I glanced up to
see Penny’s head thrown back, her face towards the ceiling and her eyes closed.
Soft sounds of pleasure escaped from her throat.

I figured I was
doing something right so I switched over
the her
other
nipple and gave it the same treatment.

While I worked
on her other breast Penny ran her hand down my stomach and slipped her hand
under my pajama bottoms and started rubbing her fingers over my panties. I was
already turned on but this took things to another level.

I started
working her nipple more aggressively in response to my growing excitement and
she replied by rubbing my pussy with more intensity. We continued like this for
a little while, each one upping the ante and the other responding, until we’d
both taken things pretty much as far as they could go.

My panties were
completely soaked through by now, making it feel like her fingers were rubbing
my pussy directly, but I needed something more. I couldn’t take the teasing
anymore. I needed something inside me. So I climbed out from under Penny and
quickly slipped out of my pajamas and panties. Falling back onto the couch I
spread my legs and started playing with myself, my eyes locked directly on hers
as my fingers slipped in and out of my pussy.

Penny slipped
out of her bottoms shortly after I did, watching me the entire time.

I was expecting
her to start playing with herself too but what I got was even better. She dropped
down to the floor, crawled over until she was between my legs, and started
licking my pussy.

I let out a low
moan of pleasure and shifted my fingers so they were rubbing my clit while
Penny ate me out, her tongue working expertly in and around my pussy, hitting
all the right notes as only someone with a pussy of their own can.

And then I let
out an even louder moan as she got her fingers involved, touching and rubbing
and sliding in and out of my pussy while she continued working it with her
tongue.

“A
good one, huh?”
Penny said, smiling, my juices covering her face, making it
gleam under the light.

Penny put on her
pouty face. “I want a turn.”

“Be my guest,” I
said, relinquishing my spot on the couch.

Clapping her
hands, she bounced up onto the couch, spread her legs wide and beckoned me
over. Smiling, I obliged, dropping my face onto her pussy and going to town
while she played with her clit.