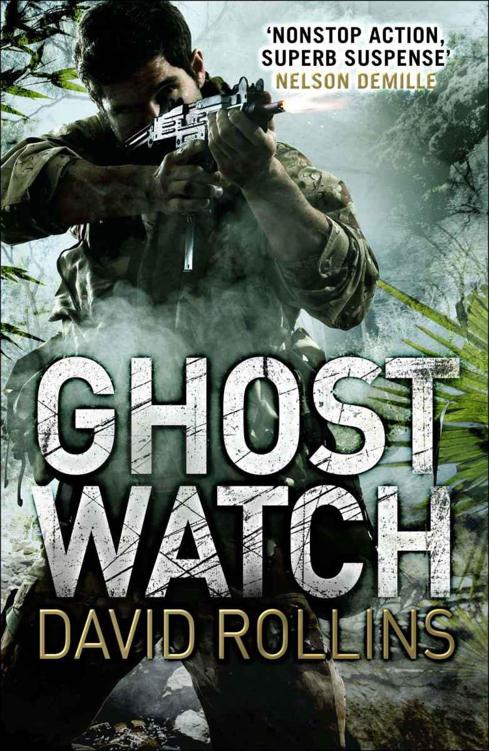 Scarred by the death of a fellow agent last year, Special Agent Vin Cooper volunteers for the most dangerous job going: personal security for bent politicians in Afghanistan. But when his principal is blown up by a suicide bomber, Cooper is reassigned. Now he’s babysitting a pair of spoilt hip-hop superstars, flown to a top-secret base in Rwanda to perform a sympathy gig for the US military.

It’s bad enough that the pair, once lovers, now hate each others guts. But then their UN chopper is forced down into the warlord-run wilderness of the Congo jungle. Surrounded by enemy fire, Cooper has to think quickly as his principals are dragged away. Now he’s trapped in the jungle without radio or supplies. He’ll risk his life to save his superstars: that’s his job. But who is he fighting? And why is he here?

Ticking like a time-bomb, brimming with terror and threat, David Rollins’
Ghost Watch
is a high-voltage story of corruption, cover-up and blistering suspense.

DAVID ROLLINS
was born in Sydney and still lives there. He attempted to join the military on leaving school and, luckily for both parties, was rejected. He became a journalist, and then an advertising copywriter. After twenty years selling useless stuff to people who didn’t want or need it, he sat down to write his first novel. He’s still writing.

First published in Australia in 2010 by Pan Macmillan.

This paperback edition first published in Great Britain in 2011 by Corvus, an imprint of Atlantic Books Ltd.

The moral right of David Rollins to be identified as the author of this work has been asserted in accordance with the Copyright, Designs and Patents Act of 1988.

This is a work of fiction. All characters, organizations, and events portrayed in this novel are either products of the author’s imagination or are used fictitiously.

For Sam, Jack, Bart and Ruby
. 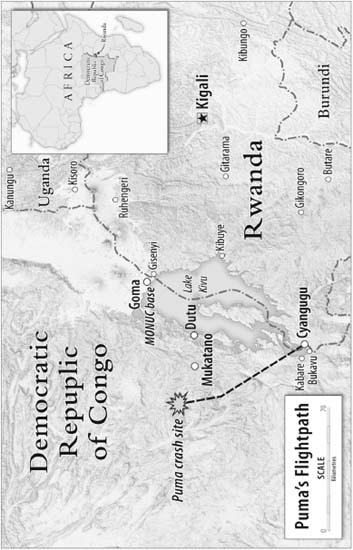 The conquest of the earth, which mostly means the taking it away from those who have a different complexion or slightly flatter noses than ourselves, is not a pretty thing . . .

What’s mine is mine. What’s yours is mine.

W
arm sheets of rain fell from clouds piled like towers of shaving foam above the steaming rainforest. Orange mud showed where vehicles and foot traffic had flayed the skin of vegetation from the ground. There was so much mud, it was as if the base had been rubbed raw. The tread in my boots was clogged with it, making my feet feel heavier than a drunk’s. The stuff was under my fingernails, grinding between my teeth, in my hair and my groin. The sweat and grease of eight days in the Congo rainforest stung my eyes, and a miasma of flies and mosquitoes trailed behind me, along with the rest of my beaten little troop, as we trudged in the stinking humidity through rust-colored puddles of rainwater.

I was looking for someone among the organized chaos and, when I found him, I was going to spoil the asshole’s day.

We looked like the walking dead – a bunch of filthy, haggard, hollow-eyed cadavers lacerated from head to foot by nature’s razor wire: the elephant grass that grew everywhere here. Groups of so-called US allies hereabouts, the armed militia known as the National Congress for the Defense of the People, stopped what they were doing and stared at us. The government troops from the Democratic Republic of the Congo, just across the Rwandan border, called these soldiers ‘the rebels’. My fellow American advisors, here to train the rebels in the art of waging war against the insurgent Hutu militants hunkered down in the DRC, also stared as we cut a swath of silence through the late-afternoon activities at Camp Come Together – most of which consisted of lounging around, smoking and drinking.

And then I saw him. He was up ahead – supervising while others did the grunt work, loading pallets and crates onto a large flatbed truck. Nothing unusual in other people doing his dirty work. The ‘he’ I’m referring to was a shithead by the name of Beau Lockhart, from Kornflak & Greene, the guy who had built this base and ran it for the US Department of Defense. He was involved in shit up to his eyeballs. And the motive? Greed – same as always.

By now I was running on autopilot. I hadn’t eaten much for several days and been forced to drink river water that was soupy with amoeba. Since then, my bowels had had a mind of their own, evacuating themselves whenever. I walked toward Lockhart, my own shit leaking down my legs.

‘Hey, Major!’ Sergeant Major Cy Cassidy called out behind me.

Now, wouldn’t that be out of character?

Lockhart was sharing a joke with a group of US Army personnel, who were, no doubt, good men and women for the most part. But I wondered what they were loading. Did they have any idea what was in those pallets? Lockhart didn’t see me coming. I pulled the Sig Sauer from my holster. Two rounds left in the mag. A couple of the men, and one woman, doing the grunt work looked up and saw me coming. Saw the intent. Froze.

My weapon was raised, two-handed grip, no mistaking the target. Lockhart had his back to me, oblivious.

‘City pussy? It don’t rate by comparison,’ I heard him say with a
tsk
, like some wine connoisseur unhappy with a vintage. ‘You wanna try pussy from the bush, man. Ai, these fuckin’ tribal girls rut, know what I’m sayin’? I can’t answer for the quality of the local dick, mind. One of you bitches might like to take it from here . . . ha ha . . .’

‘You’re under arrest,’ I said.

He glanced over his shoulder and went instinctively for his pistol. Before his hand got there I smashed the weapon backhand across the side of his skull. Blood burst from a split in the skin on his cheek and spurted from his ear hole as he fell to his knees in the mud.

I had nothing to say to this sack of shit other than the comments posted by my side-arm. The temptation to kick him in the ribs was hard to resist.

Lockhart raised himself on one hand, his head swaying, long strands of spit, sweat and blood draped from his lower lip. Recognition flickered across his face.

One of the crates being loaded was half on, half off the truck’s tailgate. I leaned on it so that it fell to the ground and I brought the heel of my boot down hard on the green-painted wood packing, splintering it. Shit . . . milk powder. Twenty-four cans of the stuff, not what I was hoping to find.

Lockhart laughed so I struck him again, laying the Sig’s barrel across his jaw line. That wiped away the grin. He coughed and spat a clot of blood into the mud between his hands. Splintered teeth dotted the crimson mucus.

Cassidy again. I ignored him, pulled back the Sig’s slide, chambering a round, one behind it on standby. I fell to my knees behind Lockhart, grabbed hold of his perfumed hair and pulled back his head. He was semiconscious, no fight left in him. He smelled clean, of hair product and a cologne that was ironically called ‘Guilty’, but there was a stink to this guy that nothing could mask. I placed the business end of the blue-black barrel under his jaw, beneath the joint, and moved my head to the other side, away from the blast of torn flesh, shattered bone, and remaining teeth that would follow the exiting slug.

He again went for the Glock strapped to his thigh. I rapped it sharply with the butt of the Sig to change his mind about pulling it. My purpose hardened. Do it for the dead. For the baby thrown into the bushes; for the women who lost their arms; for all the kids made to grow up mean; for Travis and Shaquand; for Marcus, Francis and Fournier. Do it for what his associates did to Ayesha and for all the men and women mutilated and slaughtered by the people
we
trained. For the weapons, supplied by this fucker working both sides of the river, that made the mess across the border so much more possible. Do it for Anna.

It would be so easy. An excuse to take revenge on all the bad that just seemed to pile up when no one was looking. Kill Lockhart and I win. That’s the way I looked at it. Cassidy was wrong about this not being the way to do it. Killing Lockhart was
right
. It would settle so many scores, balance those scales a little. I slipped my finger inside the trigger guard. Three and a half pounds of pressure from my index figure would do it, send one-hundred-and-twenty-four grains of lead up through his brain at twelve hundred feet per second. The slug would be in his head less than a thousandth of a second, enough time to do humankind a big favor.

Muddy water oozed into my pants, mixing with my own funk. My breathing slowed.

‘Hey,
you!
’ yelled an unfamiliar voice some distance away, but closing in fast. ‘Drop your weapon!’

A swarm of US Army personnel and Rwandan military police were running toward me, drawing pistols, raising M16s.