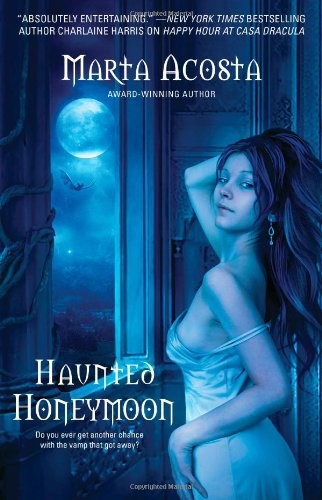 Praise for the work of this award-winning author

“The characters pop off the page and the dialogue crackles with good lines.”

“An addictive combo plate of romance and vamp satire.”

“Stephanie Plum meets
Sex and the City
in this stylish, hilarious novel.”

—Jennifer Cox, author of
Around the World in 80 Dates

“Intelligence and fabulosity mixed into a delicious cocktail.”

Haunted Honeymoon
is also available as an eBook

The Bride of Casa Dracula

All rights reserved, including the right to reproduce this book or portions thereof in any form whatsoever. For information address Gallery Books Subsidiary Rights Department, 1230 Avenue of the Americas, New York, NY 10020

GALLERY BOOKS and colophon are trademarks of Simon & Schuster, Inc.

with love and affection

The next time a sex toy sales consultant offered to teach me how to unlock handcuffs with a paper clip, I would accept.

Alas, hindsight is easy when one has both wrists cuffed to a metal chair bolted to a cement floor. But, necessity being the wacky aunt of improvisation, I could surely figure it out. Perhaps there was a paper clip in the desk.

A cat, one of dozens of identical striped cats here, gazed at me from atop a console across the room.

If I could pull the metal chair from its bolts, I could drag it to the desk and use my teeth to open the drawers to rummage through the office supplies. I’d always been fond of office supplies and had liberated many pens and notepads during my years of temp work; office supplies should repay the favor and liberate me.

I was yanking my arms upward to test the cuffs when I heard the
sssh-sssh
of corduroy and squeak of crepe-soled shoes. My interrogator walked to the desk and sat on it.

The others called him the Professor, and he had that neglected
look of abstracted academics. His shaggy graying hair was unbrushed, and he wore a misbuttoned argyle sweater. He placed a thick manila file on the desk and opened it.

“Here we are again,” he said flatly.

“I assure you that I wouldn’t continue to bore you if I had a choice,” I said. “Why not let me go?”

When the Professor looked at me, I saw impatience in his hazel eyes. He said, “Your resistance is unreasonable and exasperating. You know we won’t consider releasing you until you tell us who you are and why you killed Ford and Cricket Poindexter, yet you continue to whine about it.”

“There’s no more you
will
say. Try to be precise.”

“I heard a scream. I went to see what it was. I came across the accidents. Please note that I am once again demanding my right to speak to my attorney. Kidnapping and confinement is a felony.”

“Only when humans are involved, not creatures. But the law is a distraction,” he said with a frown. “You were carried away in your bloodlust. Things got out of control—all that blood and you couldn’t help yourself since you’re a vampire, after all.”

“There’s no such thing as vampires.”

He stood up and reached for a button on the wall. The blinds opened and light flooded in. It was day. How long had I been here? I blinked to adjust my eyes.

My interrogator was staring at me. “Aren’t you afraid of the sun?”

He leaned over the desk and banged on it, a man of thought being reduced to physical acts. “Here are the facts. Fact: Ford Poindexter called nine-one-one and said that a vampire had killed his wife, Cricket. Fact: the call ended abruptly. Fact:
you were discovered at the scene, covered in blood, with blood on your mouth, by the bodies of the Poindexters. Fact: Ford’s phone had been crushed.”

I was too exhausted to cry anymore for poor Ford and Cricket Poindexter. “I’m sorry, but I’ve told you all I can. I came across the first accident and witnessed the second.”

The Professor opened the desk drawer and pulled out a ruler. I hated the ruler. He said, “Do you expect me to believe you when you can do this?” He came to me and struck me hard across the face. The metal edge cut into my skin and I tasted blood on my mouth, but the taste of my own blood didn’t do anything to sate my craving. Then my skin mended over smoothly.

“How do you do
that
if you’re not a vampire?” the Professor asked, his brow wrinkled in puzzlement.

I could have told him things. I could have told him that I had been a normal human
chica
until I’d gone to a party and met a rather fabulous man. A moment of passion with Dr. Oswald K. Grant, certified plastic surgeon and vampire, had infected me, but my own freakish immune system kicked into high gear and fought off death.

I could have explained that I was the only known Normal—well,
normalish
—survivor of the infection, which caused a craving for blood and had given me the ability to heal quickly from minor cuts. Unlike born-vampires, I could enjoy daylight without sunblock.

A second infusion of blood by a more powerful vampire, Ian Ducharme, had saved my life after an attack by a rogue vampire. But the cure had been almost as deadly as the injury. When I’d finally recovered, I was unusually strong, able to heal from serious injury, and I could see in almost total darkness.

Ian’s blood had also transmitted a condition he had that was rare even among vampires: when I touched someone, skin to
skin, I got a delicious buzz. The sensation almost compensated for the fact that alcohol and drugs didn’t affect me.

I got a rush from drinking blood. Now, blood
and
sex … that was a thrill.

I could have mentioned that I’d been engaged to Dr. Oswald Grant, but so many forces had conspired against our marriage that our relationship shattered like a thin crystal goblet on a stone floor.

I could have relayed my adventures with heiresses, tabloid writers, has-been actors, shapeshifters, and the nutcase who’d hired me to ghostwrite his memoirs, which became an international bestseller, but my interrogator seemed tragically humor-deficient.

If I felt confessional, I might have shared my inability to stay away from goddamn Ian Ducharme, a man with too many secrets who also believed he was exempt from the law. A man who would kill for me and might kill because of me.

The Professor asked, “Where are you from? Whose orders are you following?”

“I’m under no one’s orders. I don’t know what you think I am, but I’m an ordinary human girl.”

Then he struck me again and again with the ruler, repeating dispassionately, “Who are you? What are you?” until his arm got tired.

I hurt so badly that I was sobbing, but I could and would endure his blows rather than give up the people I loved, or anyone else for that matter.

The Professor breathed heavily with his exertions. He leaned
forward, looking like a depressed middle manager. I imagined that his blood would taste thin and unsatisfying, of salads with no-fat bottled dressing, frozen fish, and intellect.

I spit out a mouthful of blood and said, “Do you want to know who I am? I am a Miracle of the Saints and if you don’t let me go, you will pay for it, I promise you, you crazy mad scientist. Did I mention crazy?”

The Professor went to the door and spoke to the beefy guards outside. Their blood would be deliciously thick and salty, like the greasy burgers and fries they ate every day.

He told them, “Do whatever you have to do to find out who she is. And
what
she is.”

It was at times like these that I wish I’d exhibited a little more self-control. Some judicious restraint and diplomacy. And yet I never did. Which brings us back to hindsight.

one
Love to Blood You, Baby

It was a marvelously sunny April day and I took a minute to admire the dignified bumblebees hovering like stripy zeppelins over the lavender hedge, and inhale the scent of freesia and narcissus before I packed my gardening gear into the back of my small green pickup. Since no one was around, I tossed a thirty-five-gallon bin of green recycling into the truck bed without my usual pretense of effort.

The garden had once been formal and restrained, with perfectly trimmed boxwood hedges; the sort of landscape my father, who had a landscaping company, installed. I’d transformed it into a place bursting with color and texture by adding interesting plant varieties and flowering shrubs.

As I swept the debris from the path, my brown dog, Rosemary, tap-danced by my side, and I told him, “We’ll go in a minute. Thank you for your patience.”

I leaned on the handle of my broom and looked up to see Gigi Barton, my client and friend, coming toward me. The heiress to the Barton tissue fortune (“It’s not worth sneezing at if it isn’t
Barton’s!”) was dressed in a bold geometric print wrap dress over skinny pants and heels with a dozen tiny buckles. She worked the path like a runway and held out one arm to display a small silver package.

“Milagro, are you talking to that dog?”

“Yes, I am. The majority of pet owners talk to their pets. Did I tell you that I’m freelancing for
Paws to Reflect
, a newsletter for canine companions?” I had a degree in creative writing from a Fancy University (F.U.), but I hadn’t been able to sell any of my fiction.

“You have the oddest ways of amusing yourself,” Gigi said, “but the garden looks gorgeous. I love the urns.”

The magnificent terra-cotta urns contained hundreds of deep purple and lemon yellow tulips, pansies, and freesias. “Thanks. I layered the bulbs, so you’ll get a long succession of bloom.”

“Wonderful!” She held the silver package toward me and said, “Would you give this to Lord Ian? I finally had the chance to have the mug shot framed from my arrest at our scavenger hunt last summer.”

Gigi ran in the same circles as my boyfriend/lover/whatever, Ian Ducharme, who had one of those suspect European titles. Of course, I thought all titles were suspect unless they were on the covers of books.

I pulled off my grimy goatskin gloves and took the package. “I’m sure you look stunning.”

She laughed. “I’ve learned a thing or two about getting a good mug shot over the years. The trick is to soften the lights with a scarf and have the photographer work with you. A girl like you shouldn’t have any problem doing that. Just flash a little tit … or, in your case, a lot.”

And One Rode West by Graham, Heather
The Orchid House by Lucinda Riley
His Diamond Bride by Lucy Gordon
Cairo Modern by Naguib Mahfouz
Reforming a Rake by Suzanne Enoch
From Venice With Love by Alison Roberts
Juliet's Moon by Ann Rinaldi
On The Ropes by Cari Quinn
The Ivory Swing by Janette Turner Hospital
Inside the Mind of Gideon Rayburn by Sarah Miller