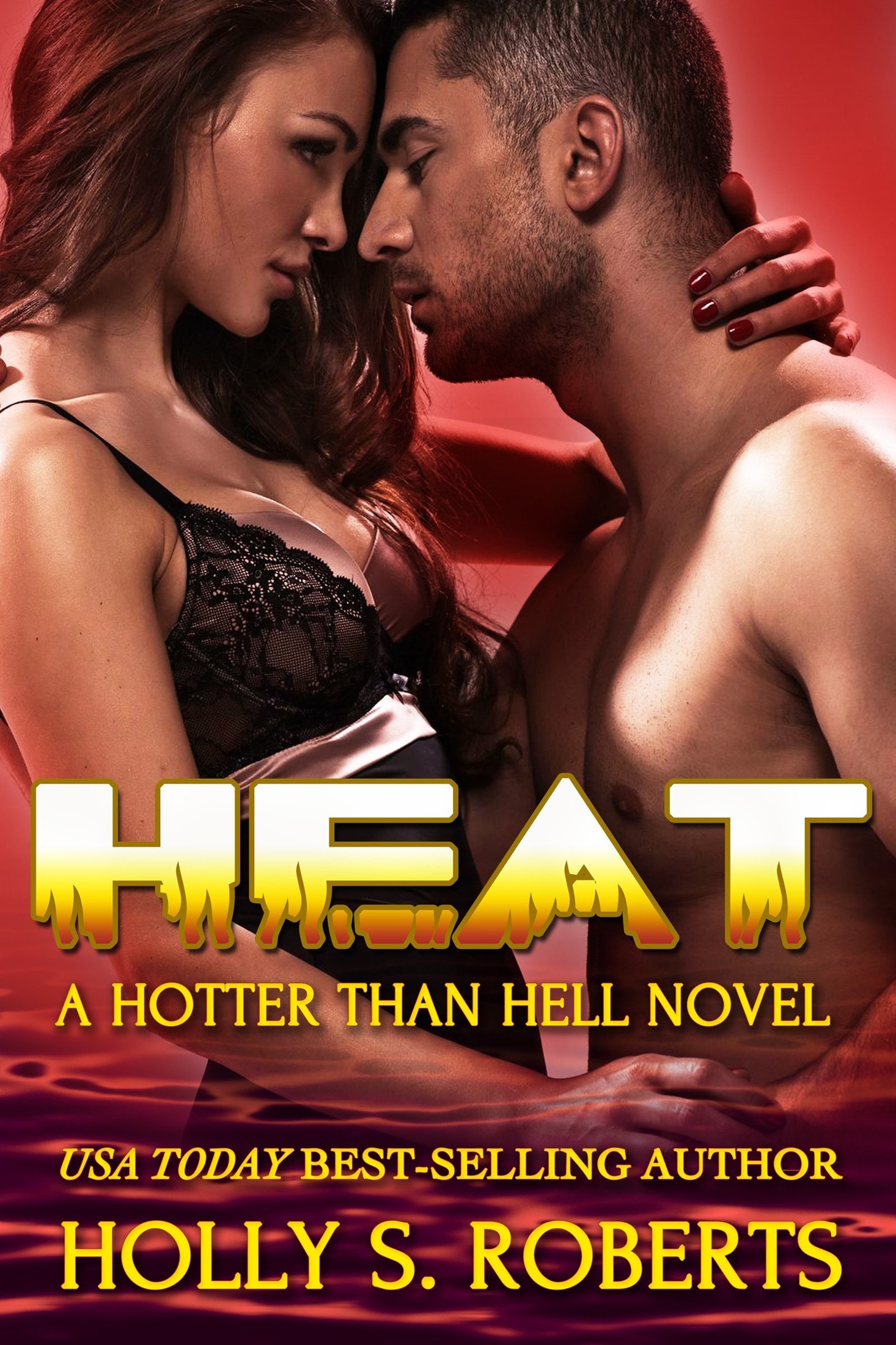 All rights reserved. No portion of this book may be multiplied, stored in a retrieval system, transmitted in any form or by whatever means. Electronic, mechanical, photocopying, recording, or otherwise without express written permission of the writer. This eBook is licensed for your use only.

No person, brand, or corporation mentioned in this Book should be taken to have endorsed this Book nor should the events surrounding them be considered in any way factual.

For the laughs my wicked friend.

Holly Roberts is a USA Today best-selling author of thirty books writing under three pen names. More than two million copies of her books have sold worldwide. She lives high in the Arizona Mountains with her husband and two spoiled dogs.

THEY SAY YOUR LIFE
flashes before your eyes when death is imminent. That’s not quite true. It’s a perpetually fast stream of dreams, failures, and fucking what ifs. Or at least, that’s how it was for me.

People call me Mak but my real name is Madison Abigail Kinlock. I’m standing in an underground parking garage in downtown Phoenix with pepper spray pointing at a cheating douchebag.

The temperature is over a hundred degrees, and sweat is dripping down my brow and into my eyes, causing them to burn. The douche, Harry Dandridge, seems to think his bat will one-up my pepper spray. He could be right.

Dandridge wants my camera, along with a piece of my skull, and who can blame him? I followed Harry into the garage and took pictures while a prostitute gave him a blow job in the backseat of his white Lincoln. I would have escaped without incident if I hadn’t decided a close-up dick shot was called for—all in the name of cheating douchebags, of course. Harry was well occupied when a speeding car squealed its tires and Harry opened his eyes. I took a picture at that exact moment, and believe me, it’s a moneymaker. Harry dislodged the prostitute from his dick, tossed her to the cement, and charged from the car with a shiny aluminum bat in hand. For a guy with a pot belly and his willy hanging from his unzipped pants, he moved quickly.

The prostitute picked herself up and ran away on her six-inch platform heels faster than I could run on a pair half that high. I released the camera, letting it swing on the strap around my neck, and pulled the pepper spray. I have a gun on my hip, tucked beneath my shirt, and I’m not exactly happy with my decision regarding pulling the pepper spray when my gun should be in my hand. This shows how much my cop’s instincts have deteriorated since turning in my badge and taking up PI work. Now, I’m in a standoff with a pissed off man who was cut off from his ejaculatory end game and will also be paying out a shit load of money to his soon to be ex-wife.

His snide grin lets me know he has no intention of following my command.

“You think I’m afraid of a little pepper spray, you stupid bitch? Hand over the damn camera.” His high-pitched voice touches a nerve, and I’m hoping that his bright red face means he’ll stroke out before we reach a less-than-mutual understanding. I ignore the sweat-burn in my eyes and hold the canister steady. It’s in my right hand, which is my strong arm, but my bad shoulder is holding that arm up, and I need Harry to stroke out fairly quickly.

It’s actually a relief when, in my peripheral vision, I notice two black Cadillacs charging through the garage. They come to a sudden halt about twenty feet from me and Harry. Even with their darkly tinted windows, only idiots drive black cars in Phoenix in the summer.

Four huge men, in expensive-looking black suits, wearing dark sunglasses pile out of the cars. Maybe someone is filming an Italian mob movie and we’re in the middle of the shootout scene. The Caddy-dudes have guns, and my world has suddenly gone from sucks-to-be-me to completely fucked. Before becoming a private investigator, I worked three years as a police officer on street patrol and know that even in their perfectly fitted designer suits these men are thugs.

This is where the flash of dreams, failures, and fucking what ifs come in.

I’m the equivalent of a blonde bombshell with brunette hair. I have large breasts, a slender waist, and a round face with huge green eyes surrounded by full, long eyelashes.

As a young teenager, my attributes didn’t stop me from being a tomboy. Over the summer of my fifteenth year, my budding breasts exploded and my new breasts most definitely interfered. The boys themselves put the biggest damper on things. The same ones I played football with during weekend pickup games changed overnight. They made up sexual stories about me and passed them around high school as truth.

Girls and boys alike believed the rumors. I never quite understood why a loner and a bookworm, who minded her own business was made out to be such a slut. Not that I gave it a lot of thought. I was also blessed by being born with a tough outer shell that very little invaded. If you add my couldn’t-care-less attitude to my looks, most considered me a conceited bitch. Again, I didn’t care. I had big dreams on my horizon and nothing would stand in my way.

My looks, for some strange reason, played a part in my grand scheme for life. More than anything, I wanted to be taken seriously. This meant men, would look me in the eye and not at my breasts while speaking to me.

This may not add up to a career in law enforcement for most people, but it did for me. I loved police officers from the time I was a child. I had no fear of them. They stood for integrity and justice, and they made the world a safer place to live in. I saw officers as heroes. I counted the years, and then months, then days until I could put my dream into play. I even took a few criminal justice classes after graduating high school to hold me over. Twenty-one was not the year to celebrate legal drinking. It was the year I finally realized my dream.

Because of my early summer birthday, I attended the police academy at the worst possible time. The Devil’s backyard isn’t as hot as Phoenix, Arizona, in July. Hotter than hell is a fitting description. To realize my dream, I sweat through four and a half sizzling months in hell’s inferno. It paid off. I graduated at the top of my class and even excelled at the physical requirements. There’s no double standard in law enforcement. Men and women take the same tests—physical and academic.

After completing the academy, I lived my dream for three glorious years. Three years of patrolling the streets of Phoenix in a heavy Kevlar vest, a dark blue uniform, and a shining gold badge on my chest.

To be honest, the job had its ups and downs. Sexual harassment, mostly from married cops, being one of the downs. On the up side, the last thing a criminal looked at when my gun, Taser, or pepper spray was pointed in his or her direction was my chest.

Above all, I loved the camaraderie, the sense of family, and the spirit of the brother and sisterhood that wearing blue gave me. I, the tomboy, the loner bookworm—fit in.

My dream literally came to a crashing halt high in the Arizona Mountains on a ski slope.

It was one of my rare weekends off and I headed up north for a day of winter snowboarding. Most people think of Arizona as desert. That’s far from the truth. Arizona has great ski areas set among the high mountain pines. I loved untamed powder and took ridiculous risks because I was twenty-four years old and thought I was invincible. I was also an adrenaline junky who enjoyed getting away from the grind of the streets for a short time and testing my limits. The particular run that ruined my career wasn’t even that difficult to shred. To this day, I’m not sure exactly what happened. The end result was a confrontation with a tree that I didn’t win. I should feel lucky that I’m alive.

The worst damage was a shoulder injury that required multiple surgeries. Pain, surgery, more pain, rehabilitation, surgery. I suffered through this endless cycle for a year. I worked my ass off and did everything the doctors told me to so I could get back on the street. Even so, at one year and two months, holding my gun left my hand shaking. I refused to give up and fooled my orthopedic surgeon into releasing me with a fit-for-duty letter. I took four ibuprofen, amped myself up with two Monster drinks, and went to the firing range to qualify.

That was officially the second-worst day of my life.

Turning in my badge and gun takes first place.

My off-duty injury nets me exactly $165 a month from the police retirement system. Even living with my thermostat on eighty-four, the money doesn’t come close to covering the cost of my monthly electric bill in hundred plus temperatures during a Phoenix summer. I still had to pay rent, utilities and buy food.

I had few options unless I wanted to go back to school and work a minimum wage job while I got a degree. There was only one real solution. Unfortunately, it required me to sink as low on the blue totem pole as any ex-cop can go. I bit the bullet and applied for my PI license.

I’ve been a private investigator for two years now and specialize in everything on the right side of the law. Sometimes the money is less than the minimum wage I turned up my nose at.

Now, here I am, mentally cataloging dreams, failures, and fucking what ifs while staring at four guns.

Thug One nods his dark, closely cropped head. “Dandridge is coming with us,” he says in a deep voice that one would expect from someone his size.

Harry slowly lowers the bat and takes two steps in my direction. I keep my pepper spray trained on him because he’s still got the bat. The buckets of sweat dripping off Harry’s face are telling and there’s a good chance he might pee his pants any second. His willy is still hanging out and this is not something I care to see.