(c. 190 B.c.-120 B.C.) is credited with the
invention of trigonometry and was the
first to scientifically catalogue the positions of the stars. Furthermore, he
was one of the first Europeans to use
observations and information from
Babylonian astronomy for his own research into the solar system. Perhaps
elements of Hipparchus's knowledge
and ideas were used in the construction of the Antikythera Mechanism?

The Antikythera Device is the earliest surviving item of complex mechanical technology. The use of gear
wheels more than 2,000 years ago is
nothing less than astonishing, and its
fine workmanship is as highly developed as any 18th-century clock. In recent years, a number of working
reconstructions of this ancient computer have been assembled, one being
a partial reconstruction by Australian
computer scientist Allan George
Bromley (1947-2002) of the University
of Sydney, together with clockmaker
Frank Percival. Bromley also made
more accurate x-ray images of the object, which were the basis of a 3D
model of the mechanism produced by
his student Bernard Gardner. A few
years later, English orrery maker (an
orrery is a mechanical model of the
solar system) John Gleave constructed
a full working model, with the front
dial depicting the yearly progress of
the sun and moon through the Zodiac
against a representation of the Egyptian calendar.

The most recent study and reconstruction of the object was made in
2002 by Michael Wright, the curator
of mechanical engineering at the Science Museum in London, working together with Allan Bromley. Although
some of the conclusions of Wright's new study disagree with certain aspects of Derek De Solla Price's work,
Wright does imply that the mechanism
is even more ingenious than Price
thought. To arrive at his theories,
Wright used X rays of the object using
a method known as linear tomography.
This technique can show detail from a
single plane or region of an object in
sharp focus. Wright was thus able to
study the gears in great detail and
found that the device would have been
able to accurately replicate not only the
motions of the sun and moon, but those
of all the planets known to the ancient
Greeks: Mercury, Venus, Mars, Jupiter, and Saturn. So it is possible that
by making use of bronze indicators on
a circular face, which depict the constellations of the Zodiac around its
edge, the mechanism would have been
able to (fairly accurately) calculate the
positions of the known planets for any

specific date. In September 2002,
Wright's completed reconstruction
went on display as part of the exhibition of Ancient Technology at
Technopolis, a museum in Athens. 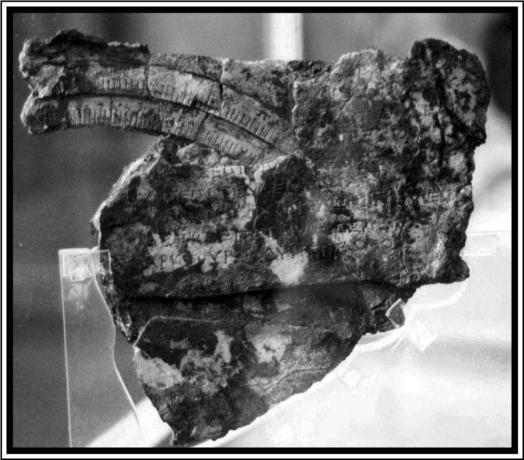 Despite the years of study and the
various reconstructions and theories,
nobody really knows how the
Antikythera Device was used. It has
been suggested that it had an astrological function and was used for computerized horoscopes, that it
functioned as a planetarium for teaching purposes, or even that it was a complicated toy for the wealthy. Derek De
Solla Price believed that the mechanism was evidence of an ancient Greek
tradition of highly intricate mechanical technology. His opinion was that
this skill and knowledge was not lost
when ancient Greece went into decline, but was passed on through the Arab world, which possessed similar
mechanisms at a later date, and became the foundation of European
clock-making techniques in the Middle
Ages. Price felt that originally the device had been permanently mounted,
conceivably in a statue, and put on display. Perhaps it was once contained
inside a structure similar to the intriguing Tower of Winds, an octagonal
marble tower that functioned as a
water-powered timepiece in the
Roman agora at Athens. 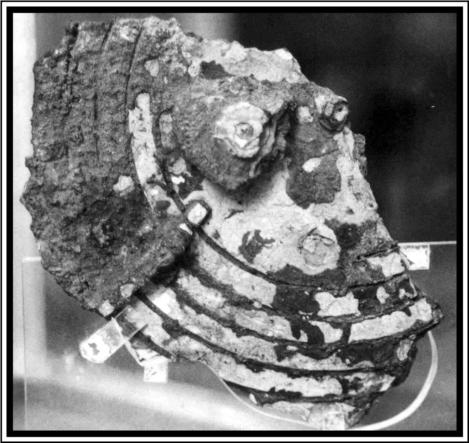 Detail showing doorplate of the device.

The discovery and reconstructions
of the Antikythera Mechanism have
also persuaded scholars to look at
descriptions in ancient texts of such
devices in a different light. Previously,
it was believed that the mentions
of mechanical astronomical models
scattered over the works of several
ancient writers should not be interpreted literally. The Greeks, it was

felt, had the theory, but not the mechanical knowledge. But after the discovery and testing of the Antikythera
Mechanism, this line of thought will
surely have to change. Roman orator
and writer Cicero, writing in the first
century B.C. and living at the time of
the Antikythera shipwreck, mentions
an invention of his friend and teacher,
the previously mentioned Poseidonius.
Cicero notes that Poseidonius had recently constructed a device "which
at each revolution reproduces the
same motions of the sun, the moon,
and the five planets that take place in
the heavens every day and night."
Cicero also mentions that the Sicilian
astronomer, engineer, and mathematician Archimedes (c. 287 B.c.-212 B.C.),
"is said to have made a small planetarium." In connection with this device, the orator also remarks that the
Roman consul Marcellus took great pride in the possession of a planetarium designed and built by
Archimedes himself, which he had
taken as booty from the captured city
of Syracuse, on the eastern coast
of Sicily. In fact, it was during this
siege of this city in 212 B.C. that
Archimedes was killed by Roman
soldiers. Some researchers have even
proposed that it was an astronomical device designed and built by
Archimedes that was rescued from
the Antikythera shipwreck. Without
doubt, one of the most amazing and
intriguing artifacts of the ancient
world, the original Antikythera
Mechanism is currently on display in
the collection of the National Archaeological Museum in Athens, accompanied by a reconstruction. There is also
a replica of the ancient device displayed at the American Computer
Museum in Bozeman, Montana. The
discovery of the Antikythera Mechanism has challenged our perception of
the scientific and technological capabilities of the ancient world in no un

certain terms. Reconstructions have
proven that the design functions as an
astronomical computer, and shows
that the scientists of the Greek and
Roman world of the first century B.C.
were perfectly capable of designing
and building complicated mechanisms,
which would not be equalled for 1,000
years. Derek De Solla Price commented that the civilization that possessed the technology and knowledge
to construct such a mechanism "could
have built almost anything they
wanted to." Unfortunately, most of
what they created has not survived.
The fact that the Antikythera Mechanism is not specifically mentioned in
any of the ancient texts that have come
down to us proves how much has been
lost from this important and fascinating period in European history. In fact,
if it wasn't for the curiosity of Greek
sponge fishermen more than 100 years
ago, we would not even have this eloquent proof of the advanced scientific
achievements of the Greeks of 2,000
years ago.

Strange hieroglyphs in the Temple of Osiris in Abydos.

On December 12, 1903, the Wright
brothers made the first sustained and
controlled flight by powered airplane
in history at Kitty Hawk, North Carolina. At least, this is the accepted story.
But had man mastered the power of
flight much earlier, perhaps hundreds
or even thousands of years earlier?
Some researchers believe that there
is evidence to suggest that this is indeed the case, but that the knowledge
has been lost to history. The physical
evidence for this ancient flight comes
mainly in the form of enigmatic South
American and Egyptian artifacts and
Egyptian carvings.

The first examples are the so-called
gold aircraft from Colombia. Some of
these artifacts date to about A.D. 500
and are attributed to the Tolima culture, which inhabited the highlands of
Colombia from around A.D. 200 to 1000.

Traditionally described by archaeologists as animal or insect figurines, the
objects seem to display features compatible with airplane technology, such
as delta wings, vertical stabilizers, and
horizontal elevators. A further example, a stylized gold alloy flying fish
pendant, comes from the Calima culture of southwest Colombia, (c. 200 B.C.-
A.D. 600). A photo of such a pendant
was included in Erich Von Daniken's
1972 book, The Gold of the Gods, and
he believed the object represented an
airplane used by outer space visitors.
Although the figure is thought by archaeologists to represent a stylized
version of a flying fish found in the
region, there are some features, particularly those around the tail, which
appear significantly different from
anything found in nature. 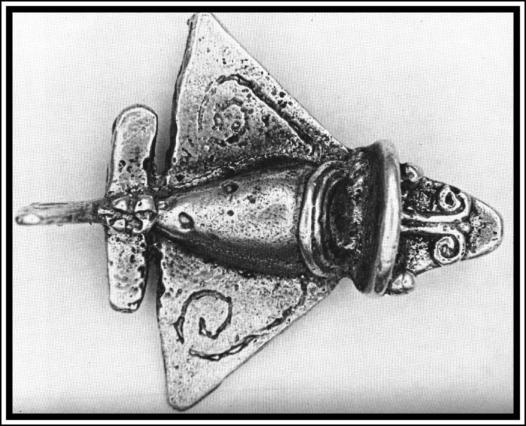 A gold insect model from a tomb in Columbia.

A Treasure to Die For by Richard Houston
The Whenabouts of Burr by Michael Kurland
Complicated Shadows by Graham Thomson
A Death at Rosings: A Pride & Prejudice Variation by Renata McMann, Summer Hanford
Betrayal by Lee Nichols
Heart in Hand: Stitches in Time Series #3 by Barbara Cameron
The Bullion Brothers: Billionaire triplet brothers interracial menage by Tania Beaton
Total Immunity by Robert Ward
Holiday Wedding by Robyn Neeley
Now the War Is Over by Annie Murray