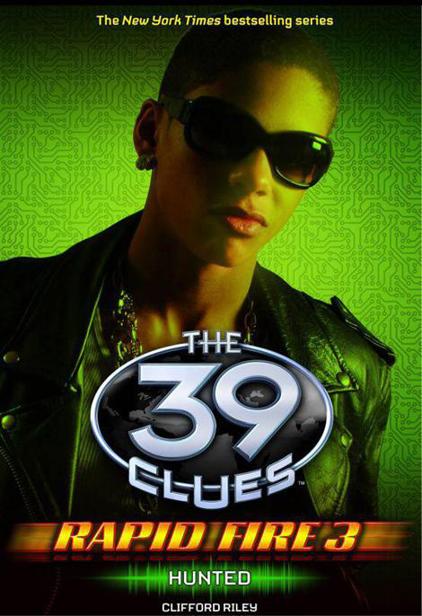 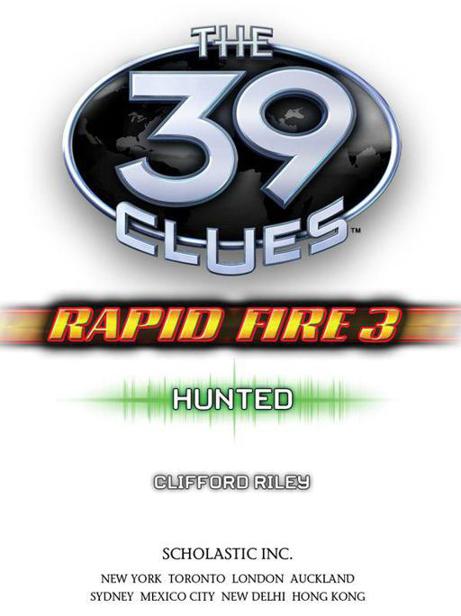 UNLOCK A TOP SECRET FILE
ABOUT THE CAHILLS’ DEADLIEST ENEMY —
THE VESPERS
!

The code fragment for this story is:
PE

Are you ready to save the world?

The walls of the watcher’s office were painted a stark, blinding white. Others found the endless lack of color unsettling, even frightening, but the watcher enjoyed her sterile environment. She didn’t need windows or paintings or trophies from past missions. She just needed one thing, the only thing in her office that broke the uniformity of the room — the panel of viewscreens opposite her desk. When they weren’t in use, they blended perfectly with the surgically clean walls, but the viewscreens were rarely turned off. She was the watcher. And there was always someone to watch.

The watcher saw everything. She saw into the offices of politicians from every country. She observed five-star generals discussing strategy during top secret meetings. She heard the words and monitored the faces of thousands of unsuspecting people around the world. No one could escape the watcher’s eyes.

Not even the Cahill family.

The watcher had followed them throughout her entire career. All of her colleagues had. No one was a greater threat to her organization than the Cahills. And now they were on the move again.

Not that they’d ever really stopped. The four branches of the largest, most powerful family in the world had been hunting for the 39 Clues for five hundred years. None of them — not the Ekaterinas, the Janus, the Tomas, or even the powerful Lucians — had managed to find all of the Clues.

But that was about to change. Grace Cahill, the matriarch of the Cahill family, was dead. And her death had kicked off a new Clue hunt, with teams from all branches of the Cahill family competing. Whoever was the first to find the Clues would become the most powerful person in human history. Or so they thought.

The watcher was sitting inside her office, looking through the latest reports on Cahill activity, a small smile playing across her face. Grace Cahill had been gone less than a week, and the Clue-hunting teams were already creating mayhem that rivaled anything their ancestors had caused. Which, of course, was why they so intrigued the watcher. The Cahills were the best inventors, athletes, artists, and leaders in the world, and they had spent centuries using their formidable talents to search for Clues. They were very good at what they did. And the watcher needed good people.

It would be tricky, convincing one of them to abandon the Clue hunt in favor of other pursuits. But she knew that, to the right Cahill, the watcher’s offer would have considerable appeal.

The trick was to identify the most promising candidate. Her employers needed someone malleable, someone who could be convinced to make the Clues a second priority.

One of the Cahill children.

They were more open-minded than their parents, and more talented, too. In spite of their young ages, many of them had already achieved far more than their adult counterparts. They were intelligent, strong, wealthy, and even powerful. Each one had the potential to make the watcher’s employers very happy. But more important, their youth made them vulnerable. They would be drawn in by the tantalizing promise of something greater than the Clues. The watcher would make the right candidate an offer that couldn’t be refused.

First, though, she had to eliminate any candidate who might jeopardize her employers’ mission. She had to find someone with the right mix of talent and morals that were a bit . . . flexible. Someone her employers could count on to get a job done — no matter what that job might be.

After all, the Vespers only accepted the best.

Ted Starling felt a surge of victory as he pulled the car to a stop in front of the Franklin Institute in downtown Philadelphia.

“Lucky guess,” his brother, Ned, said from the backseat, but he was grinning.

“The Cahill kids aren’t in it,” Ted observed. “Just their babysitter. Looks like they’ve been inside for a while.”

“Couldn’t have been that long,” Ned replied. “We only lost them half an hour ago.”

In the passenger seat next to Ted, his sister, Sinead, was already pulling on the door handle. “What are you waiting for? Let’s go!” she said.

Sinead and Ned were Ted’s fellow triplets, each with matching auburn hair and freckles. They were sixteen years old, but Sinead was technically the oldest. Only by a few minutes, but that didn’t stop her from acting like she was in charge.

Amy and Dan Cahill had managed to lose them on the highway en route to the Franklin Institute in Philadelphia, looking for a Clue believed to be hidden by Benjamin Franklin himself. They’d had a stroke of luck — there was no other explanation as to how they’d gotten here first. The Starlings were all geniuses, and Ted knew more about Benjamin Franklin than most Franklin historians, while Amy and Dan were younger, less informed, and not half as smart.

The triplets piled out of the car and made for the Franklin Institute. Ted’s stride quickened as they approached the sprawling building he’d once spent so much time in. When he was a kid, Franklin had been his favorite inventor — the guy had discovered electricity and designed the first bifocals, after all. He was almost as talented as Ted himself.

Inside, Sinead went straight to a map of the museum and planted her finger on it. “There,” she said. “Franklin Gallery. That’s where the little orphans are.”

Ted and his brother followed her without comment, but something was niggling at the back of Ted’s super-powered brain as they passed through the halls.

“Ned,” he said, “remember that time our parents took us to Philly for the weekend? And we spent a whole day in this museum?”

“Yeah, you spent half the day in the Franklin Gallery, quizzing the curator about Franklin trivia.” Ned laughed. “He tried to have you kicked out for causing a disturbance.”

“Yeah, but he was really just mad that I knew more about Franklin then he did,” Ted said. “And then I got bored and sneaked off to try to get into the storage room. They kept more stuff back there, like the really old documents that weren’t on display.”

Ted didn’t answer. “Sinead,” he hissed, so that his sister slowed down to look at him. “I have an idea.”

The entrance to the storage room was just as Ted remembered. Locked.

It was also right off a busy hallway, and on top of plenty of other visitors and a school group, the hall was patrolled by several museum personnel.

“I don’t like this,” Sinead said. “Amy and Dan are probably busy gathering all the information in the gallery right now!”

“You can go to the gallery if you want,” Ted said, knowing that there was no way she would actually take him up on it. The Starling triplets always worked together. When the three of them combined their genius IQs, they were unstoppable.

Ted had his cell phone out, a special one he’d modified himself, and was aiming it at the lock on the storage room door. The lock was a typical model, nothing very sophisticated. Just a keypad requiring a five-digit code. The decoder on Ted’s phone would have it unlocked in less than a minute. The problem was getting them inside without anyone seeing.

Ned rolled his eyes. “You get to have all the fun,” he said, but he was already sauntering off, getting as far away from Ted and Sinead as possible. Ted aimed his phone at the door and heard a satisfying
snick
as the lock released. A moment later, his brother’s voice suddenly rang out through the wide hall, drawing the eyes of every person in the vicinity.

Ted and Sinead pulled the door open and slipped inside.

“Whatever. Just start looking for Franklin documents. Anything that looks like it might relate to a clue. If we haven’t found anything in the next five minutes, we’re going to the gallery,” Sinead said.

The storage room was pretty dark, but it did have some low lighting that cast a dim illumination through the space. Ted saw rows of shelves full of plastic bins labeled with numbers. He pulled one out, rifling through the papers inside.

On the other side of the room, Sinead was examining a large stack of gray plastic tubs.

“Christmas decorations,” she announced, rolling her eyes. “Great, Ted. I’m sure we’re going to find exactly what we’re looking for in here.”

Ted clenched his teeth but didn’t reply. He checked a few more storage bins, all filled with useless information. A few times, his heart leaped when he saw the word
Franklin
, but it was only the name of the building scribbled across old invoices and memos to museum employees.

“Two minutes left,” Sinead called from across the room. Frustrated, Ted became less careful as he looked through the contents of every file. How was he supposed to find anything in five minutes? He started dumping papers onto the floor, snatching them up at random to see what they were, and throwing them to the ground when they proved to be unhelpful. Empty storage bins and their lids lay scattered among the papers that carpeted the floor. Sinead was probably right. Anything useful would be found by following the Cahill kids, not by looking through the junk in storage.

And then light spilled into the room.

“Hey!” a museum guard yelled from the doorway. “What are you — ”

He never finished his sentence because Ted and Sinead were already in motion, charging at the man before he could take a step backward. Sinead pulled the guard into the storage room and shoved him back into a wall, planting a hand over the man’s mouth to keep him from making any noise.

For a moment, Ted froze as he watched his sister struggle with the guard. He couldn’t leave her. She’d almost certainly be caught and arrested, and their Clue-hunting team would be cut down to two. They needed each other if they were going to win this contest. But then Ted reached into his pocket and pulled out his cell phone.

“Hang on!” he called to his sister. The security guard was grabbing at Sinead’s long auburn hair with his free arm and trying to use his weight to push her off. The man was bigger than Sinead, and she was wearing out fast.

Ted began entering commands into his cell phone so fast his fingers were a blur. If he could just rewrite this program quickly enough —

“Ted!” snarled Sinead. She was losing her grip on the security guard, who had slipped to the side and was flailing one leg at her, muffled yells emitting from behind Sinead’s hand.

Curvy by Alexa Riley
Under the Moons of Mars: A History and Anthology of "the Scientific Romance" in the Munsey Magazines, 1912-1920 by Sam Moskowitz (ed.)
Gordianus The Finder Omnibus (Books 1-4) by Saylor, Steven
Claiming the Single Mom's Heart by Glynna Kaye
Ringside by Chase, Elodie
Monsters by Liz Kay
Not to be Taken by Anthony Berkeley
It Really IS a Wonderful Life: The Snowflake Falls but Hearts in Love Keep a Home Warm All Year Long by Linda Wood Rondeau
The Secret Seven by Enid Blyton
Love Without Boundaries by Michelle Howard, M. K. Eidem